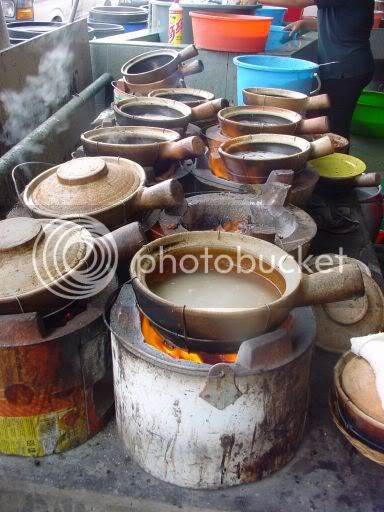 We revisited the coffee shop right behind O&S yesterday to eat the claypot chicken rice. Actually, it was just an excuse to also get more of the yummy egg tarts! This particular claypot chicken rice seller is a really hardworking fella as he is open from morning till night time taking a break only after lunch for a few hours. You can't see him the above picture but he's constantly behind the row of claypots burning over the charcoal fire all the time as he has to monitor the rice being cooked. Next to the stove is a huge cache of charcoal for him to keep the fire burning. Usually the row of claypots will have various pots cooking the rice at different stages. If you see the first pot, rice and water has just been added. It will be allowed to cook and a nice crust will form at the bottom of the claypot which is the chewy bits I love. When the rice is almost done, a pre-cooked topping of chicken and chinese sausage in black soya sauce is added. The lid will be placed on top and the topping is heated through for a few minutes before it is served. 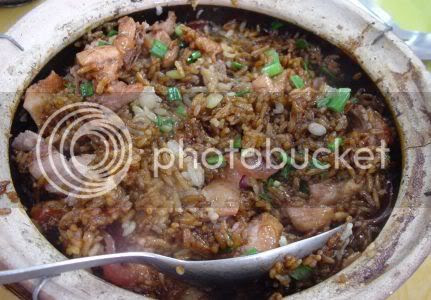 Once it is served at your table, mix the topping up with the rice and enjoy. I love the rice here as he adds a bit of ginger to his topping. My only complaint is there is too much chicken versus rice but it's a good deal at RM10 for two people. Remember to scrap the bits that stick to the claypot and eat them as they are the best.
Restaurant Sorn
Corner of Jalan 20/14
Behind O&S Restaurant

Opens from 6am to 9pm daily. The claypot chicken rice starts around 7 am to 3pm. For dinner they serve from 6 pm to 9 pm.
*Disclaimer: The opinions expressed here is entirely based on my personal tastebuds and may vary for others. The reviewer also declares that she has not received any monetary or non-monetary compensation from the restaurant for writing this review.

Other reviews of this place:
Posted by boo_licious at 9:35 AM

how does the claypot chicken rice taste? good? not good?

whistler - it tastes good to me but then it's up to each person's tastebuds.

Re the blog problems - now we can view but still unable to publish new entries. Hopefully Blogger resolves the problems soon.