The weather has been pretty haywire, some days the heat is unbearable while other days you get torrential rainstorms. One rainy night, I had the urge to have a nice hot soupy dinner. Digging through my fridge, I found half a pumpkin lurking at the bottom and a bunch of spring onions. Skimming through my recipes and pantry, it looked like I could rustle up a quick pumpkin soup from a Delia Smith cookbook.


Most recipes for pumpkin always recommend you use butternut as it's sweeter than a normal pumpkin but I find them way too expensive for me. Instead, I use a local pumpkin that looks like a butternut with a light brown skin. It's also taller than the usual rotund local green pumpkins you get at the wet market. The best thing about pumpkins is they can keep for a long time. Whenever I see any of these pseudo-butternut pumpkins in the wet market, I pick up a few and leave them at my sideboard for a few weeks to a month. Check on your pumpkin occasionally to ensure that it is not too ripe. Once it is cut, you can also keep it wrapped up in some cling film in your fridge.

I also made some toasted cheese sandwiches, just grab some bread and put a slab of cheese between two pieces of bread. Butter the outside of the bread and heat up a frying pan. Put the buttered side on the hot pan and press down to brown. The cheese will melt inside. Turn it over to the other buttered side once it is browned and repeat for the other side. You can experiment with different breads and cheese for a nice toasted sandwich. Since I had a loaf of 7-Grains Sprouted Bread from Adventist Bakery, I used that and cheddar cheese from my fridge.

The recipe below does call for sweetcorn which I did not have any that night and had to do with chopped spring onions. Do try it with the toasted sweetcorn as it adds a nice touch to the creamy soup.

Begin by melting the butter in the saucepan, then add the onion and soften it for about 8 minutes. After that add the chopped pumpkin along with half the sweetcorn, then give everything a good stir and season with salt and pepper. Put the lid on and, keeping the heat low, allow the vegetables to sweat gently and release their juices – this should take about 10 minutes. Next, pour in the milk and stock and simmer gently for about 20 minutes. Put the lid on for this but leave a little gap (so it's not quite on) because, with the presence of the milk, it could boil over. Keep a close eye on it anyway.While that's happening, pre-heat the grill to its highest setting for 10 minutes. Mix the rest of the sweetcorn with the melted butter, spread it out on a baking tray, season with salt and pepper and pop it under the hot grill about 3 inches (7.5 cm) from the heat – it will take about 8 minutes to become nicely toasted and golden, but remember to move the sweetcorn around on the baking tray halfway through.When the soup is ready, pour it into a food processor or blender and blend it to a purée, leaving a little bit of texture – it doesn't need to be absolutely smooth. You will probably need to do this in 2 batches. Serve the soup in warm bowls with the toasted sweetcorn sprinkled over.

Here's my bright yellow pumpkin soup (looks like Splashie the car) and my toasted cheese sandwich. It was creamy and thick, so satisfying on a cold rainy night. 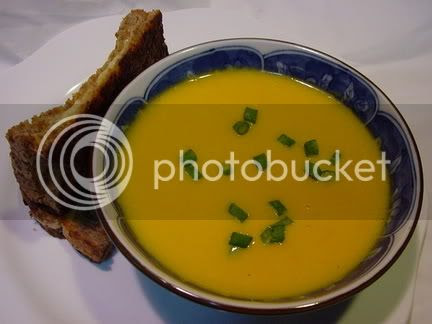 I am a Cantonese and I cannot live without soup! Yum! Free Credit Score