Do you remember those Popeye the sailor cartoons? He was always getting bashed up by Brutus when he tried to save his gal, Olive Oyl in some silly situation. Well, in his cartoon world, his favourite food was spinach in a can which gave him superhuman strength to beat up Brutus and win his gal back.

Although in real life, spinach can't transform us immediately into a superman/woman, those Popeye cartoons were right as eating spinach is good for us as it is packed with nutrients. These nutrients like lutein, vitamin C, folate and iron can help prevent heart disease, osteoporosis, cancer and even arthritis.

There are various ways to cook spinach but I love it with stock made from anchovies (ikan bilis in Malay) which I find is sweeter than chicken stock. There is always a jar of fried ikan bilis in my fridge courtesy of my aunt so whipping up the stock is easy peasy. Sometimes when I make fried rice, I will sprinkle some fried ikan bilis on top and it's pure bliss.

This method of cooking the spinach is quite popular in the Chinese restaurants in Malaysia. Some restaurants will also add a cut up century egg on top as additional flavour. In Cantonese, it's called siong tong (soup) yin choy (spinach). I am quite partial to baby spinach vs spinach as I hate spending time picking out the tough and old parts of the spinach.

Heat the oil in a saucepan and saute the sliced garlic till fragrant. To make the stock, add the fried ikan bilis in the saucepan with the garlic and pour 800ml boiling water from the kettle. Be careful when you pour in the water as it may sputter and sizzle for a short while. Let the stock boil. Once the stock is boiling, put in the spinach and cook for about 3 minutes. Add in salt to taste and dish up. If you like, you can also sprinkle some fried ikan bilis on top of the dish. 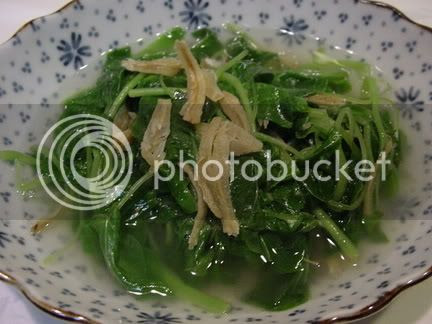 I am really not a veggie person but I know this dish is healthy.
Credit Score Online