Even before I started this blog, I have been trawling through numerous food blogs available on the Net. During one of "fishing trips", I found this blog called Is My Blog Burning? (IMBB) which is a monthly food event that involves bloggers cooking and posting recipes based on a common theme. This month's IMBB which is the fifteenth one is themed, "Has My Blog Jelled?", hosted by Elise of Simply Recipes.

The theme looked do-able since jellies are quite simple to make and Elise said I could use konnyaku jelly powder. It was extremely nice to make the jellies as it is pretty calming to stir the pot slowly. Moreover since the weather has been hot hot hot, these cool jellies were really refreshing.

Konnyaku jelly powder is made from grinding the tuber root of the konjac plant. It is popular in Japan for making an item called devil's tongue used in oden and shirataki noodles that are found in Sukiyaki. For the Malaysians, think of oden as your Japanese Yong Tau Foo dish with the variety of fish cakes.

Konnyaku jellies were extremely popular in Malaysia a few years back as it was simple to make and was termed as healthy food. There were stalls in shopping centres selling konnyaku jellies of different flavours and women were flocking to cooking schools to learn how to make the jellies. Although the konnyaku jelly hype has died down a bit but it still remains popular in Malaysia. The original recipe actually includes the addition of citric acid as a stabliser to make the jelly more crunchy. I have omitted that in my jelly recipes as I'm not a great fan of adding chemicals to my food. Even without the citric acid, the jelly is bouncy enough for my liking.

My recipes are based on a locally published cookbook called Taste of Sweet Temptations; it's chock block with jelly and agar-agar recipes. One of my all time favourites from the book is their Thai Style Coconut Konnyaku Jelly. I tend to steer away from anything that requires milk, whether coconut or evaporated so this clear jelly made from coconut water was just what I liked. Another thing I try to avoid is adding colouring to my jellies. The beauty of this jelly is it's extremely refreshing as it's made completely from young coconut water. Originally the recipe did state a combo of water and coconut water but I instead I have replaced the water portion with coconut water.
Thai Style Coconut Konnyaku Jelly
1 packet (12g) konnyaku powder
160g sugar
1,000 ml of coconut water
1 Thai young coconut, scooped out flesh

Combine konnyaku powder, sugar and mix well. Ensure you blend the two together well or else you will get lumps in your mixture. Bring coconut water to boil in a saucepan. Add in the combined konnyaku powder and sugar, cook at low heat till boiling and sugar has dissolved. You will need to stir the mixture constantly and watch the pot to ensure no overboiling. Once it has boiled, remove from the heat. Pour the mixture into mould, sprinkle coconut flesh into the mixture and leave to cool. Chill in the fridge till set. 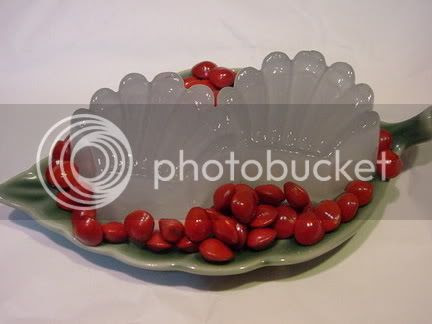 My two coconut jellies did look a bit white and plain on top of my leafy plate, so I added some red saga seeds as a decoration. The seeds are inedible and usually collected as they are called "love beads" by some romantics.

After making the coconut jelly, I was in a total "jelled up mode" and came out with this new concoction of mine. It's made from Justea, a canned green tea drink which is popular in Malaysia. As I added pieces of canned peaches in the jelly, I chose the peach flavoured green tea. The recipe is based on the coconut jelly.

Drain the canned peaches from their syrup. Dice them into small cubes, place them in the jelly moulds. Combine the konnyaku powder, sugar and mix well. Bring the Justea Green Tea with peach to boil in a saucepan. Add in the combined konnyaku powder and sugar, cook at low heat till boiling and the sugar has dissolved. Remove from heat.

Pour mixture to fill up 1/3 of the jelly moulds. Wait a few minutes then top up with 1/3 more of the mixture for the moulds until it reaches the top. This helps to keep the fruit at the bottom of the jelly. Leave to cool and chill in the fridge till set.

My peach bits did not really stick to the bottom of the jellies as I poured them out a bit fast. Instead they hovered around the middle bit and if you see the picture, you can see bits of orange within the light brown jellies. The peach flavour and smell is quite strong from the Justea so it's actually quite aromatic and does not need any additional flavouring. 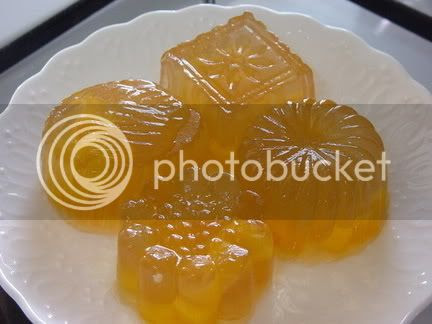 To round up my trio of jellies, I went back to my cookbook and they had a Kiwi Konnyaku Jelly which I had yet to try. They did not specify what kind of yoghurt used so I chose a low fat kiwi flavoured one to keep the sugar levels down. Surprisingly there is no taste of yoghurt in the jelly. This jelly was a bit tart though with the kiwifruits inside ( I think my kiwifruits weren't so sweet even though they had ripen).

Put the konnyaku jelly powder, yoghurt, sugar and water into a small pot. Stir and bring to boil until ingredients have dissolved. Add in the kiwi fruit cubes and use low heat to boil for another 5 minutes. Pour mixture into mould and leave to set. Chill in the fridge before serving. 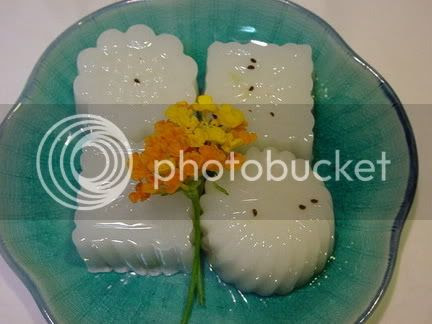 Thanks Elise for hosting IMBB 15, I had so much fun making these jellies. In fact, I forgot how fun it is that I will be adding them to my list of things to experiment. My taste teams suggested that the next round should be based on popular drinks in Malaysia; soya bean milk with cubes of cincau (glass jellies), rose syrup jellies with kiwi seeds and etc.
Posted by boo_licious at 9:59 AM

These are beautiful jellies. I can't wait to try them. No where in the US can I find recipes like this using agar agar. I am hoping to find konnyaku powder in our asian grocery.

I appreciate your comments very much and want to thank you.
By Discount Air Jordan

I am craving for these desserts. I cannot find those in LA!
Online Credit Score

I'm glad to see this blog. It really is a nice surprise! I also want to introduce you to see my website. Because it is very exciting.I believe that you will like it!