We recently had Teochew porridge with some dishes for dinner. I must admit that although I do eat porridge occasionally, I have never cooked it before at home. I got the inspiration to have Teochew porridge when I received some yummy deep fried ikan bilis (Malay for anchovies) and peanuts that my aunt made. (See the small little plate of them in the picture) They go perfectly with the plain and watery rice gruel.

The Teochews are famous for their porridge which they can eat throughout the day with a variety of salty accompaniments like kiam chai (salted vegetables), chai por (preserved radish), boiled salted duck eggs, fried salted fish and fried peanuts. They also eat porridge with braised duck (lou ark). The gravy from the braised duck is also used to cook fried bean curd (tau kua) and hard boiled eggs that all go perfectly with the porridge.

I tried to ask my mum how to cook the porridge but she said that it is all based on estimation so I tossed some rice grains in a pot, added some water and boiled it. After it has boiled, I stirred it and left it to simmer. I stirred the pot occasionally to ensure the mixture did not catch at the bottom of the pan and slowly the porridge got cooked. Once the rice grains had formed and softened, I turned the fire off.

Besides the fried ikan bilis and peanuts, we also had pan fried chicken fillets with a tomato sauce and Chinese cabbage with dried scallops. Not your usual fare in Teochew porridge but Splashie Boy is no great fan of salted vegetables and I did not have any salted duck eggs in the larder.

I had cut the Chinese cabbage in smaller pieces and soaked the dried scallops in boiling water. Peel and slice some garlic cloves and fry in a bit of oil. Once fragrant, put the cabbage in the wok and toss the mixture. Leave for 1-2 minutes and then add the dried scallops and their soaking liquid. Cover the wok and leave it to simmer for about 10-15 minutes. Season the vegetables to your taste with salt or soya sauce. 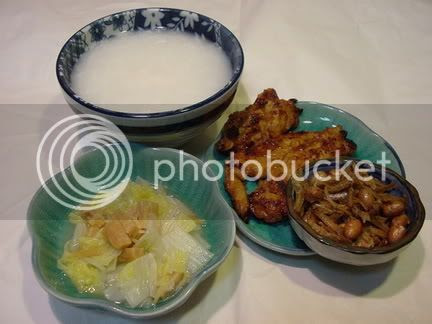