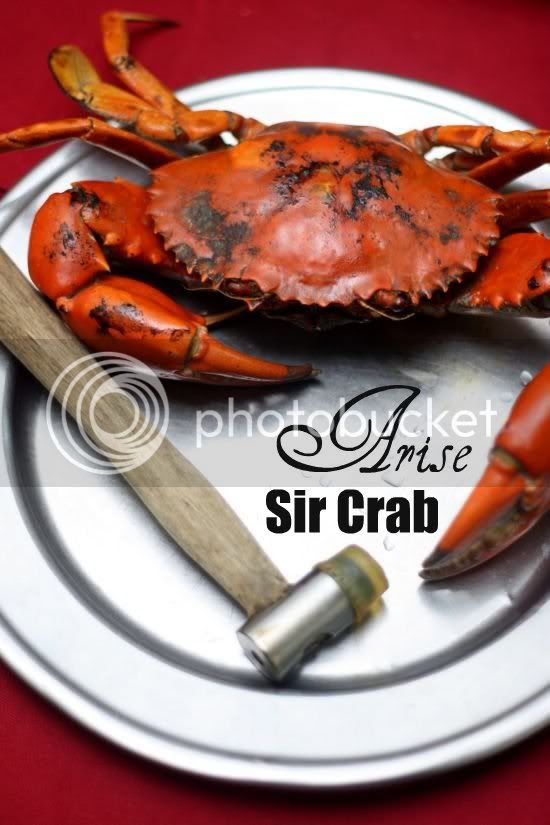 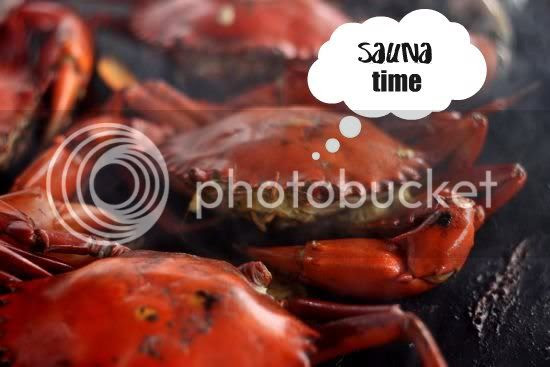 Since Precious Pea, my faithful crab partner-in-crime (yes, I confess we are serial crustacean eaters) had moved on to Down Under for bigger and better things...aka Champagne Crab (wails! I want some too), I've had to slowly cultivate a new crab partner.....in Splashie Boy. 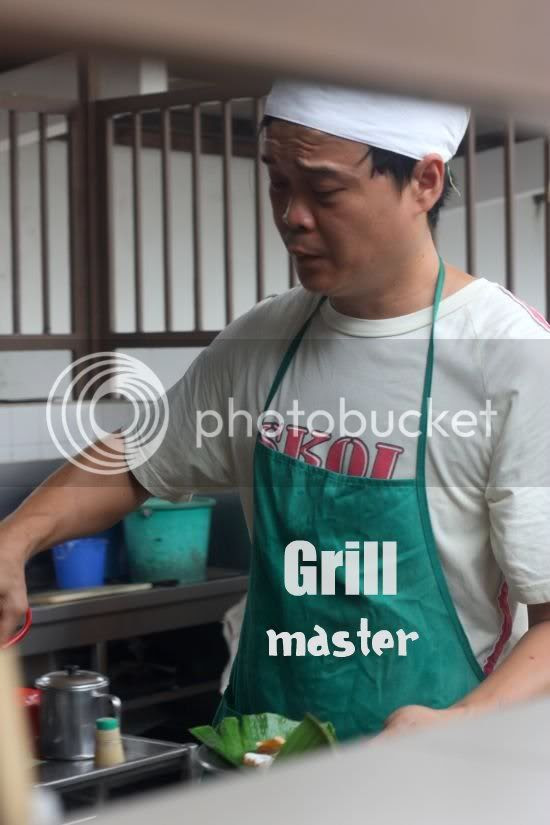 Completely in stealth mode, I've been intermittently feeding him various kinds of crabs to lure him into the crustacean eating groove. It's not been easy since it involved messy fingers and countless crabs sacrified for this one purpose, but one can happily report that the secret project barely hit its target hours before the deadline expired...as the non-crab-eater is now a convert. 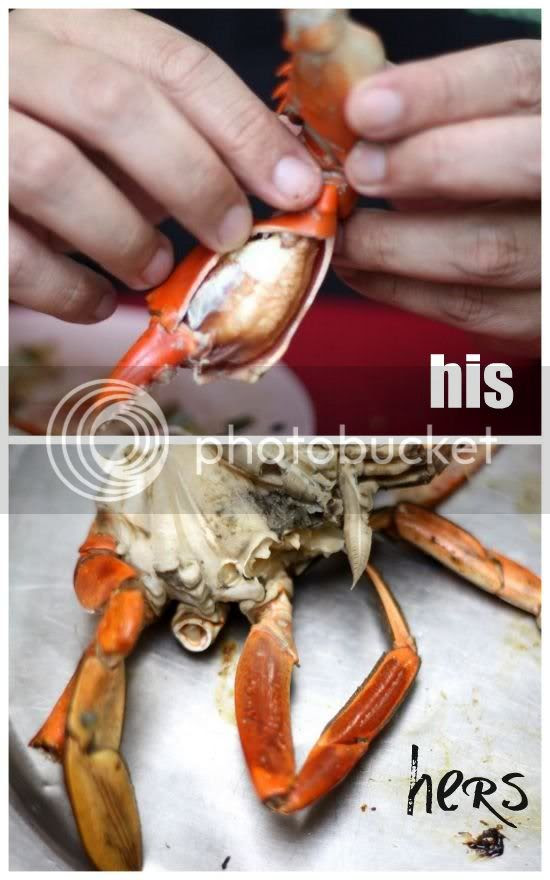 Like all successful projects, lets review each stage to gain knowledge on the best practices. We kick off with the initiation stage, where one needs to analyse the situation and understand why Splashie Boy was anti-crab-eating. A sneaky interview over dinner revealed that he finds it just too messy and bothersome to spend so much time on such tiny pieces of meat even though they're darn sweet morsels. "Give me a steak that I can just cut up instead, " he growls in fury when prodded on his eternal dislike. Luckily its more hopeful than his strong hatred for aubergine (too mushy!), durian (too smelly!) and coffee (too strong!). 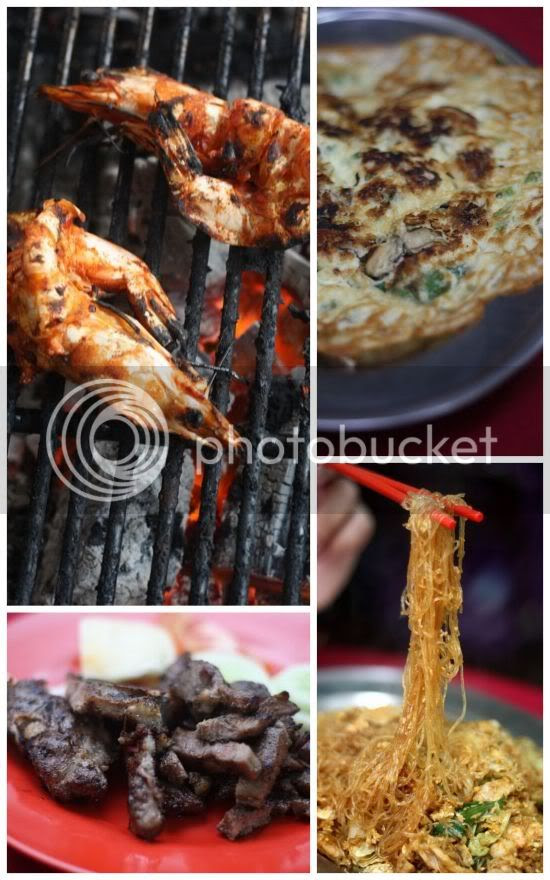 The second stage of the project is the most crucial, as it needs to be planned and designed properly to work. Hammered out in my head, my scope was to convert this non-believer. Team members were also recruited in the form of friends, who would be the perfect excuses I could use them to lure him into eating crabs in their presence. "My friends insist on eating crabs for their birthday," I reply when he gives me quizzical looks on why we're eating at a seafood restaurant. The timeline was worked out...about a year and half to give him more than enough ground to cover before he truly start to love his crabs. Like all budgets, even though a cost was worked out, it would overrun like some crazy mega project but hey, who cares right since it'll be written off in the future. 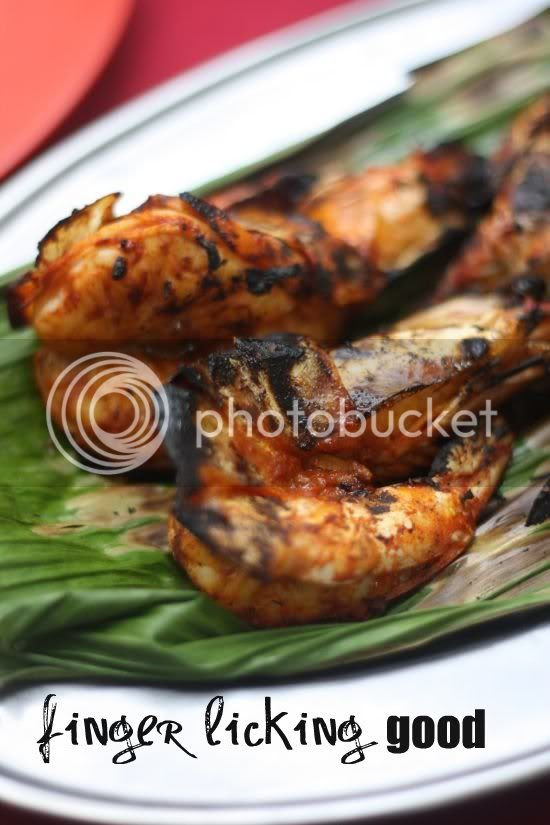 The action plan was put in place and I slowly dragged him to sample Venicia. He complained that the crabs were too buttery. Then came the next pretext around January 2010 when we introduced new friends to the joys of Robson Heights Seafood. We sampled marmite, salted egg yolk and sweet and sour varieties that he was lukewarm towards. I was skeptical it was working and decided to retreat into enjoying the mighty crustacean instead with friends. After a long lull, I cheated in October 2010 with trouble-free king crab legs at Il Primo. He slurped that up since it was the easiest way to eat but darn, was it also a pricey way to indulge in sweet crab meat. 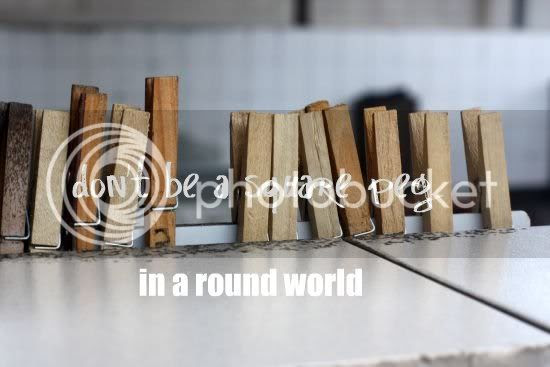 I persevered with monitoring and controling the project and just before the year became 2011, I threw down the gauntlet...grilled crabs at an old familiar place of Hing Ket. Maybe because it was the year end, he indulged me and even sought out GPS directions. I decided to play it safe - one sole grilled crab to stake my win on. It arrived steaming hot to our table, which I seperated and like playing a his and hers game, he'll go for the easy-to-eat claws while I claimed the body. Even though its troublesome, I don't mind the extra leg work to slowly coax out each piece of the tender sweet flesh....simply heaven! 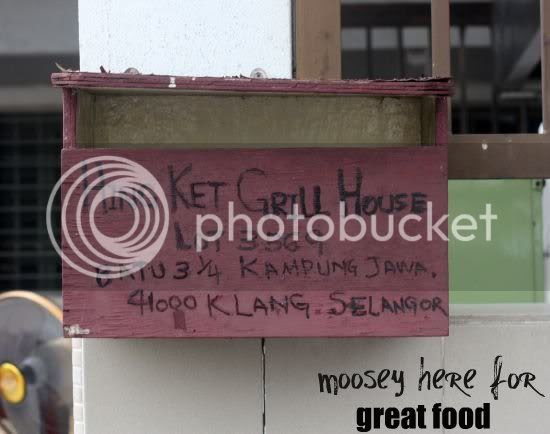 At the end of the meal, which we polished off grilled lamb and prawns, oh chien, fried tung hoon and of course the grilled crab, he gave the thumbs up to the place. It slowly dawned on me that because the crabs were grilled sans sauce, it was less messy for his fingers hence this place earned full brownie points in his eyes. Phew! I finally ended my quest and declared the whole project formally closed since he was even willing to return for more grilled crabs. He may not be a fanatic but the fact, he's willing to come for seconds in the future is a positive sign.
*Note: Hing Ket Grill House is an old school place nestled within a Malay village that sells grilled items such as seafood (an assortment of crabs, calamari, fish, prawns). Lamb chops are also grilled at this front grill section (about 4 charcoal and electric grills). They also serve fried noodles, steamed pomfret, oh chien and etc to fill up your tummies. The restaurant is split into three areas: al-fresco, fan and air-conditioned behind a glass door. That night, we dined on fried tung hoon (strands jumbled up with prawns and chicken - RM8 for a small portion), finger licking juicy grilled prawns (4 extra large pieces for RM36), fluffy o chien (RM12 for a small portion), tender and perfectly grilled lamb chops (2 pieces for RM17) and of course, the star of the show aka Sir Crab (1 crab for RM18) in his red glory. The whole meal was just a shade below RM100 for all the dishes.
Hing Ket Grill House
Lot 3569 Batu 3¼
Kampung Jawa
Klang
Tel: 03-3371 3913/ 3371 0861
(Pork Free. Open from 11.30am - 2.30 pm, 5.30 to 10.30 pm. To get here, take the Federal Highway exit for Taman Rashna, make a left turn at Taman Rashna where the Bak Kut Teh shops are. At the first junction, take a right. Go straight and after the Petronas station, you will approach a traffic light, Take a left turn and go straight. You will pass a power plant on the right and power lines. At the next traffic light, take another left turn. About 400metres down, opposite a mosque (but not directly) will be the restaurant (at the curved road) across the road. Don't take an immediate turn as the cars from the other side will be fast and furious so slowly make a u-turn by turning into another road further down. Ample parking available in the compound unless its packed to the brim. Full set of pictures are found in the Flickr set.)
Disclaimer: The opinions expressed here is entirely based on my personal tastebuds and may vary for others. This review is time sensitive; changes may occur to the place later on that can affect this opinion. The reviewer also declares that she has not received any monetary or non-monetary compensation from this place for writing the review.
Posted by boo_licious at 5:03 AM

I have read a couple times about this place but have not venture into it. As I see your pictures of the grilled seafood I can smell aroma in this early morning. Thanks for the reminder I will bring my family there.

LOL.
Good luck in Project Crab - sounds you are already more than halfway to achieving a complete win/ conversion of the non-crab lover. :)

Happy Happy - awww, that's real sweet of you to say that about my pictures. Yes, this place is fantastic and worth the drive. Loads of families also come here so hopefully yours will enjoy the whole experience.

J - am sure you had to see the pictures since it's banned and I think Project Crab has a new convert. Yipppee, just in time for 2011.

C&C - come come, we all go one day with Monkey and Fairy Godmother. She said she's not eaten here before and wanted to go for an excursion.

"Sauna time" - very funny. As you know, with saunas in Sweden, Finland and Russia (and probably other countries also) you alternate between sauna and dips in the pool. Probably not for these crabs, its just a one way traffic:)

Hahahaha, you naughty little girl! But at least all the hard work payed off! Let's make a date with Precious Pea to go for some Crab Eating when she is back in town ;)

That's hilarious! I remember when you took us to Robson Heights and I felt so bad when he said he didn't like crabs! Haha! Glad to hear he's come around! Great post boo-boo!

5 more weeks partner..another 5 more weeks to go. I am dying for crabs, crabs and more crabs. Nothing beats mud crabs back home..slurps!

Sometimes im amazed how floggers can the hidden gems like this one here! i loveeeeee Grilled crustaceans . wonder whether GPS can take us there! AND its so affordable too! 100 bucks for all those? Slurps!

Looks like you hard work paid off! Next thing you know, he's going to want to eat crabs EVERY DAY! LOL

i share splashie boy's sentiments about crabs! maybe the solution is to peel all his crabs for him and to pass him just the crab meat :D
i was reading your directions to this place, and yikes! i'd be sure to get hopelessly lost. it sounds like an incredibly complicated drive!

You sure plan your work thoroughly! next step, world domination. LOL.

I shall totally blame you if I feel "crabby" the next time I step into a sauna... :P

Three Cookies - poor crab indeed since that sauna is his last one ever!

Unka - sure, we shld all go out for an eat fest when the Queen of Crabs return to our shores.

Aly - u're the new friends I'm referring to in the Robson Heights line...but he'll only like grilled crabs, since less mess.

Precious Pea - yup, looking fwd to the day we go feasting on mud crabs and yes, local small ones rawk with their super sweet taste.

August Diners - just search on GPS, coordinates are all there and it'll direct you there like it did for us.

Bsar Babe - LOL, nope he ain't that type to keep asking for one item but he does love his steak and roast beef.

Sean - I already do that for prawns when I'm bored but I ain't doing that for crabs! Just GPS it?

Au&Target - LOL, I learn from the cats!

Life for Beginners - u won't feel crabby after the sauna but u'll be as red as a crab!

Does it come with a dip or some sort?

This is an old favourite - eaten here donkey times but never blogged abt it, hehe! I think my pics are somewhere in some folder ;-)
It's one straight road fr my house - no need for all that convoluted turnings, LOL!
Come, let's ALL go togeder-geder soon! (I'm surprised Fairy Godmother has never been - abt time we bring her there!)

Haha, what a success eh? Coaxing a non-crab lover into half a fanatic. Now for that durian-coffee-aubergine saga ..... work hard in the new year!

A good place to enjoy a tasty crab dish!

tis 'old school' is still at its best! i went there when i paid juz rm10 for a crab haha...
i still patron tis place at least once every 2 mths. Go try their fried tapioca noodles (hokkien style)-weekend only.

Preceding month I exceedingly needed buying essays. Considering especially protracted examination I discovered Write my resume who do exactly the thing I hunted. as a result dudes you actually need to try where to buy essays

I like crabs, it tastes very good, but I really hate to spend so much time getting small pieces of meat. I usually prefer someone to do that for me. I enjoyed reading your post. I am a freelance writer, you may click here to see my page. Everyone is welcome to visit.