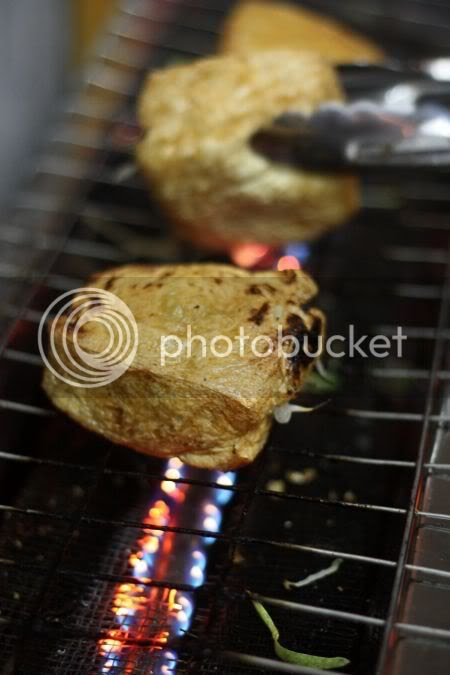 grilling tofu puffs
Hoi Peng or Hai Peng??? Recently, I had a chance to compare the two places, when we dropped by Hoi Peng for Precious Pea's farewell dinner. Well known in Petaling Jaya, Hoi Peng is actually a branch of the old stalwart seafood place Hai Peng located on Old Klang Road. While you would think the branch won't do as well as the main outlet, I must admit I felt the branch's food was way much better than the original outlet. 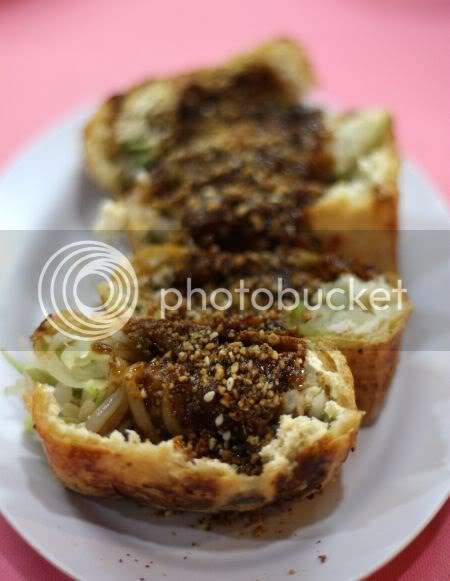 tofu bakar from Hoi Peng
Literally a neighbourhood hangout, Hoi Peng is definitely a place you need to book ahead as it is packed during the weekend. If not, you get relegated to a small table that can barely hold everything together or one that faces the kitchen and bathroom. Unlike Hai Peng that has a vast space after they expanded to the back of their single shophouse, Hoi Peng is quite cramped. The other thing we also noticed from eavesdropping on the loud conversations in nearby tables is the crabs tend to finish quite fast. Some regulars book their crabs ahead to avoid the dinner crowd. 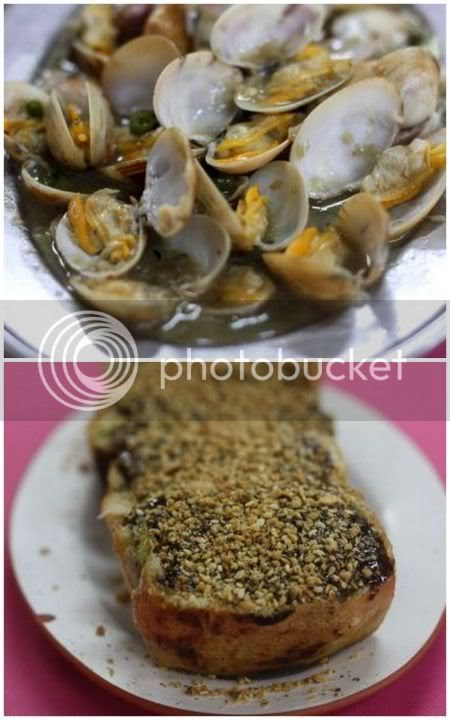 clams and tofu bakar from Hai Peng
The menu for both outlets are carbon copies - at Hai Peng there's a stall outside that gives you quick snacks while you wait for your main meal. Ditto for Hoi Peng but again there is a difference in the taste. At Hai Peng, the tofu bakar stuffed with cucumber slices don't make the mark as the extra cucumber juice has not been squeezed out making it a soggy mess when you bite into the crispy tofu puff layer. Even the sauce seems watered down with just a hint of prawn paste. Hoi Peng's version was so much better - crunchy cucumber shreds and a thick brown sauce with a strong hint of prawn paste. We also tried Hoi Peng's chicken wings as a starter - not fantastic as the meat didn't have much taste and it was a tad too dry from the deep frying. 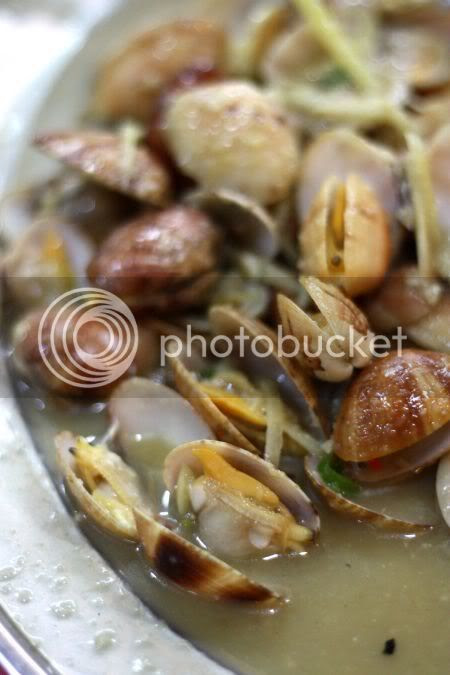 ginger fried clams from Hoi Peng
More comparisons: the ginger fried clams. Weirdly enough, this one Hai Peng got it right as Hoi Peng's version was too thick and laden with corn starch to taste great. The ginger taste seems quite muted here too at Hoi Peng. 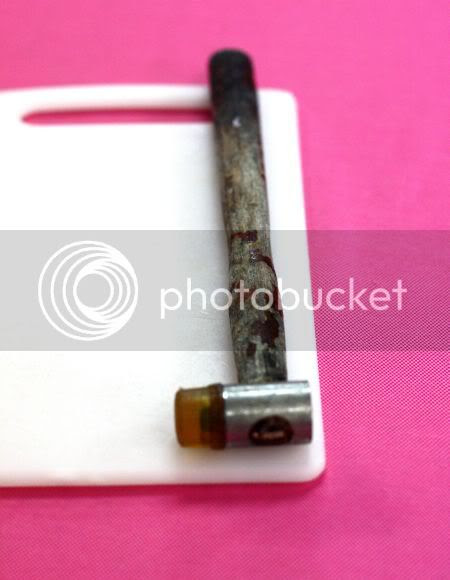 Hammer time
Next up, it was the battle of the noodles - their signature fried mee sua. It comes laden with prawns, shredded cabbage and beansprouts. At Hai Peng, the noodles still maintain quite a lot of moisture making it slightly soggier. As the places are pork free, no lard is used but they compensate that missing taste with teeny weeny crunchy small prawns or har mai. Strangely enough, even though Hai Peng also has these prawns, the Hoi Peng version tastes better as it seems crunchier, more aromatic while the noodles are also drier. For this battle, Hoi Peng wins hands down! 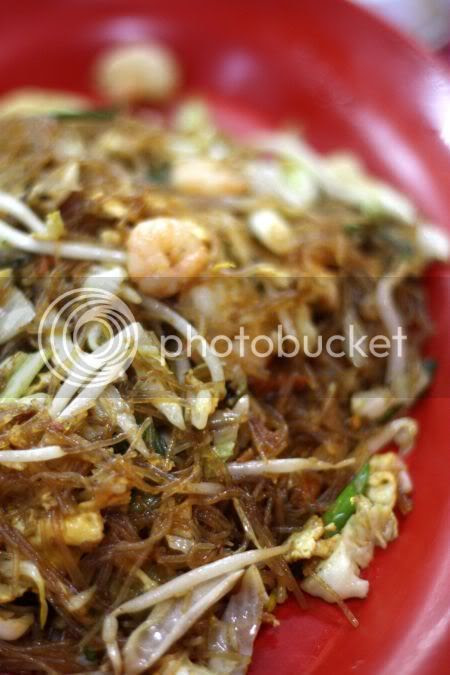 fried mee sua at Hoi Peng
Crabs was a lot tougher to determine who is the winner. Both places don't use local mud crabs but instead they go for the Indonesian version, that yields thicker claws and more meat. At Hai Peng, a minimum order of 1kg is required while Hoi Peng does not seem to limit you on the number of crabs - we had one crab done in sweet and sour and another in salted egg yolk. 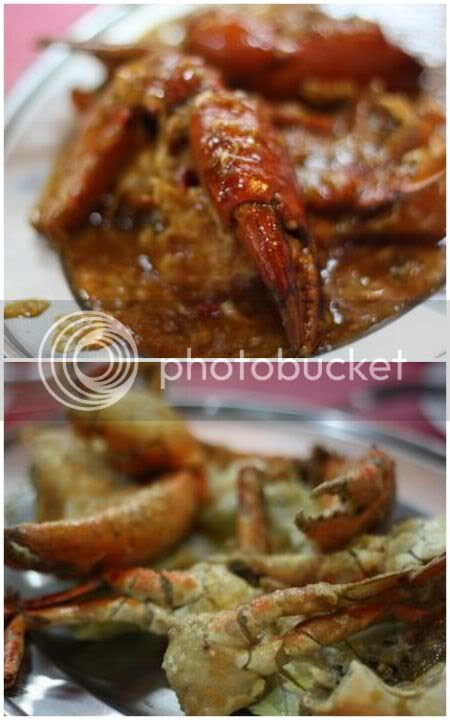 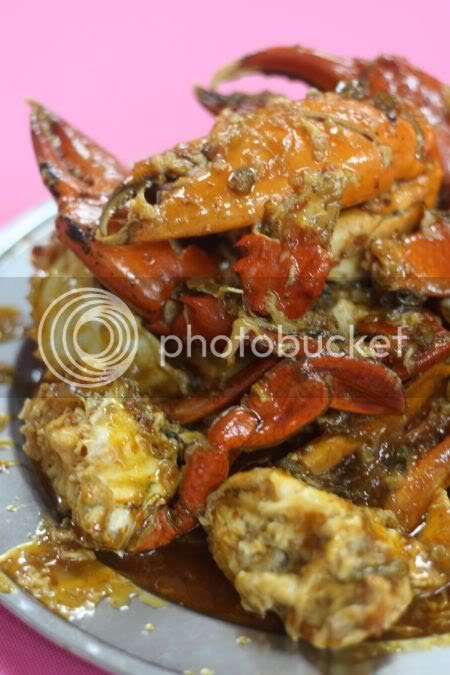 Hai Peng's sweet and sour crab
The sweet and sour crab - their signature dish has a nice thick sauce with bits of eggs. While it may not seem spicy, it did tickle my throat that night. I would have preferred a more sour taste.
In terms of comparing both restaurants, I would say in this dish, they seem quite similar. Maybe but then this just could be a figment of imagination, I felt Hoi Peng's version was thicker and tastier. No clear winner here. 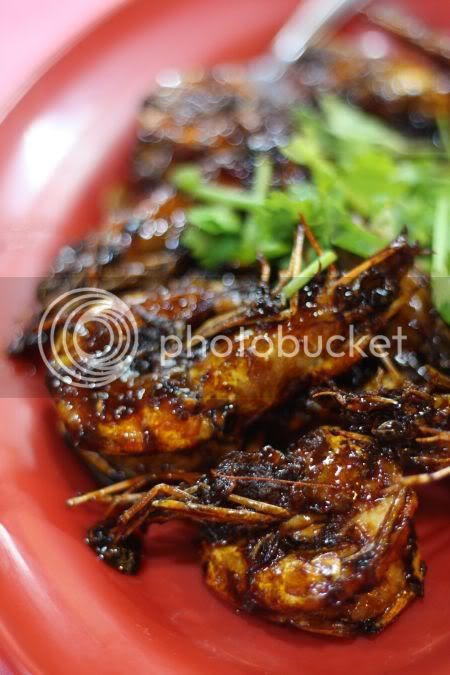 kon cheen har
Last but not least, it was their soy sauce prawns or kon cheen har - a last minute add on since the Ravenous Rabbit didn't eat the clams. While it was coated with lots of chopped garlic and soy sauce, I felt it was just too salty and it seemed to lack the sweet taste of prawns. Definitely another thing we will not reorder again.
Thus in this battle between the two, I must say Hoi Peng wins hands down while I'll try and avoid Hai Peng for a while more. Nevertheless Hoi Peng is also not perfect since some dishes ain't too great like their chicken wings and kon cheen har. Personally, I didn't think the crab dishes were that fantastic though. They tasted decent but I reckon places like Robson Heights does a better version for their salted egg yolk crab and places in Klang are way better. However, if you don't want to travel all the way, this makes an excellent choice especially if you live in Petaling Jaya.

(Pork free. It is only open for dinner. Same row as Nonya and New Formosa. For more pictures, see their Flickr set.)

(Pork free. It is only open for dinner. Near the entrance to the turn off to Taman Desa. For more pictures, see their Flickr set.)

Wow... the battle of the seafood restaurants! Me, I think I'd only drop by either HP's if I am in the neighbourhood... I tend to stick to old favourites like Robson Heights which are more consistent. But good to have more options. :)

whatever the name, it looks fabulous.. hmmm, maybe we need to organize the FFBFC here soon hor? LOL

How were the prices? The seafood here looks great and I am getting confused between Hai Peng and Hoi Peng but I think Hoi Peng seems to be the clear winner for most categories! So, Hoi Peng is definitely better then eh? =)

really?? How come I didn't notice Hoi Peng during my visit to New Formosa a few weeks ago??? Must be blind :P

i've never been to hoi peng before, but i went to hai peng last year and was rather disappointed with everything from the crabs to the kampung chicken ... so i probably should check out hoi peng next time :D

nice photo of the tofu puff.
The crabs they served are too big and the meat are too coarse to my liking.

I'm just like you. I hate it when my salted egg yolk crab has such little sauce.

Hai Peng was a bit of an office favourite for a long time, purely due to its geographical proximity to Mid Valley. Food's absolutely nothing to shout about. Proud to say that I managed to successfully engineer workmates away fr Hai Peng to nearby Robson for a way better dinner recently over CNY!

life for beginners - yes, Robsons definitely seems to be your local hangout as I've bumped into you there b4.

C&C - are we having FBBFC gathering soon??

Christy - prices were pretty ok, we paid lump sum for Hoi Peng so I can't remember the exact bill. Hoi Peng is definitely way much better than Hai Peng but only if you're in ss2.

leo - so many restaurants there, I think you'll miss it. Sri Siam has moved from their large corner space too. Think a kopitiam is set to open there.

Sean - yeah, I think u mentioned abt yr dismal visit to Hai Peng before.

neko hime - yeah, not easy to get mee suah right! I love the crispy small prawns hidden within the noodles.

minchow - Ah, the officemates are lucky that u have introduced them to better food!

I don't know how you do it! You really know where to find yummy food. Will be in SS2 end of hte week and plan to check out the fried mee sua.

Ah, the grilled tofu looks good. Can I just go there just for that? :p

The only people who can tell the difference between the original and the Bentley GT is a jeweler and he will probably have to use a jeweler's loop to do so. In fact other than not being part of the family of original Chronomat B01 , your Chronomat Evolution is the same in all other categories.

The food is MEDIOCRE but PREMIUM PRICED !! Crab RM55/kg. We ordered crab for 2 person, they gave ONE medium crab and said it weighed 1.2kg = RM66. Crazy expensive (almost same as Sri Lanka Crab price). century egg+ ginger = RM7 ! Then when the crab is served they bring a small plate of cucumbers.. Since we did not order this, we were shocked that they charged RM1.20 for this. Wht a lowdown tactic. Guess it sums up wht this place place is about.