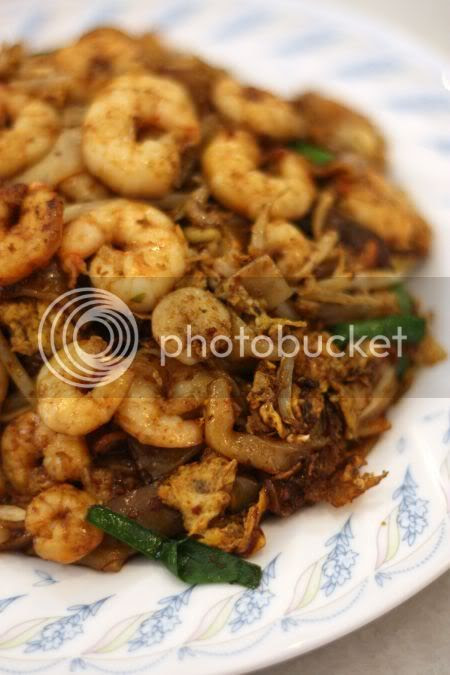 the hefty special kuey teow goreng for a whopping RM10

Those from Taiping would have heard of the infamous Doli Kuey Teow Goreng, the halal version considered as one of the best by many around. Boasting a legacy of 35 years, it got named Doli, as the owner's wife thought it was catchy. Now the son has opened up this place at Taman Tun Dr Ismail, usually more famous for their kitchen and furniture shops in front of TTDI Plaza. I must admit I was curious to give Doli a try, since I missed out in giving it a shot in Taiping once. soy sauce with chopped chillies to add a spicy kick, the waiter had to stand on the dustbin to get on top of the counter, sweet drinks to cool down

The menu is quite limited - two choices of kuey teow goreng, the "biasa" or ordinary variety for RM4.50 and the special version that is priced at RM10, nasi ayam, mee rebus, kuey teow soup, mee kari and sup ayam. 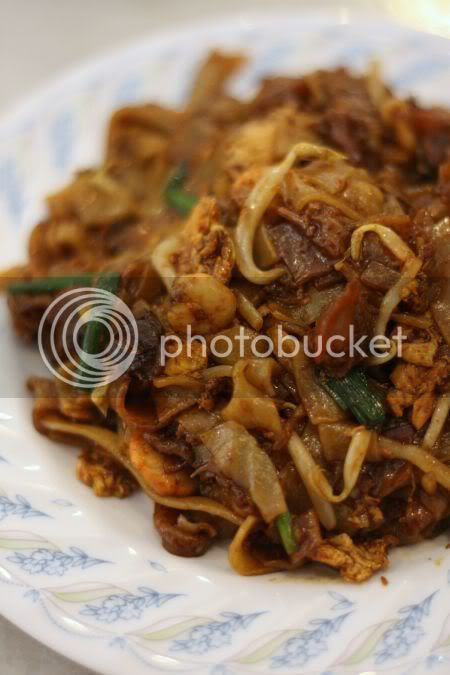 the biasa version for RM4.50

The fried kuey teow here comes with cockles, prawns, bean sprouts, eggs and spring onions except of course it's pork free hence no lard is used to fry it. It's not very dry but definitely better than the usual Malay styled fried kuey teow I've tasted before (almost soupy ones!). What's unusual is how they don't add chilli paste to fry their kuey teow goreng but instead it's served with soy sauce with chopped chillies. There's two types, the ordinary one with tiny prawns and cockles while the more premium and luxe version for double the price at RM10 gives you a mountain of larger prawns. It's also a bigger portion as the normal one comes in a teeny weeny plate.

While the fried noodles were tasty, I felt it lacked the wok hei or breath of wok compared to say the other halal kuey teow goreng at Restoran Jamal in Kelana Jaya. That wok hei part is one of the hallmarks of well fried noodles and with these two plates, they were sorely lacking as it tasted lukewarm vs piping hot from the wok. Definitely dissapointing even though my plate came laden with prawns and cockles. If you're looking for good halal char kuey teow goreng, my advice is for you to head towards Kelana Jaya as you'll definitely get a more satisfying meal there.

(Halal. Open from noon to 12 midnight. Closed on Fridays.)

RM10 for a plate for kuey teow goreng...that's really a lot...font mind trying though, if it taste good

Hi there masak masak boo licious, I would like to recommend my salmon spinach pie to you and perhaps I could make one for you and you could do a write up on my food.
www.gregs1950.blogspot.com
I also blog on success strategies at my website at www.jonathanboudville.com

I don't like lukewarm CKT...so I guess I'll check out the CKT in Kelana Jaya. ;)

i was curious too whenever i pass by there but never knew it has history back in Taiping. looks like i can remove from my list to makan :p

that's a lot of prawns on the terra menerra version!

Oh my! Look at the big juicy succulent prawns!! *oogle*

Had to do a double take. Char Kueh Teow or Char Hae. So many prawns on the first plate!

Seriously I don't think you missed much of that Taiping outing. The Doli CKT is famous there, catering to the Muslim crowd, but tastewise, even my Malay colleagues admit that it's nothing special.

Only the premium price. :)

The biasa kuay teow looked yummier than the expensive version. I'll take the cheap one any day.

You can't compare Doli with halal kuey teow goreng at Restoran Jamal in KJ because they are in different categories. But I do admit in Taiping, Doli's kuey tiow tasted much better in the 80's compared to present one. Haven't tasted the Tmn Tun one yet.