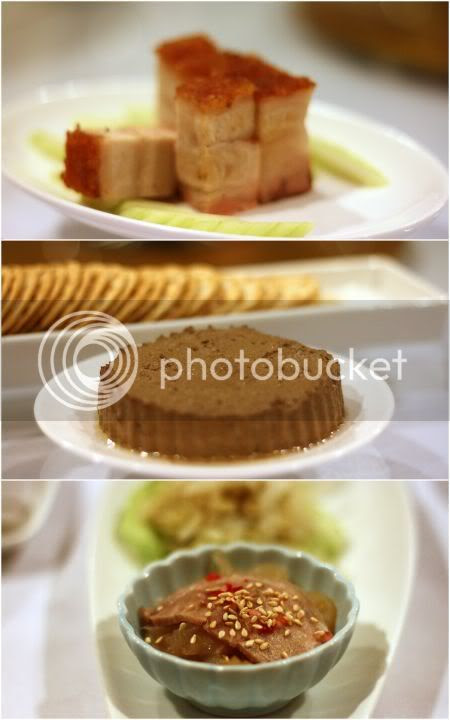 1. crunchy siu yoke, 2. homemade chicken liver pate, 3. Meet Jerry or Jellyfish hidden in the bowl.
As the US will be waking up to the start of the Thanksgiving celebrations, I thought it'll be nice to share my recent Thanksgiving experience in the heart of Kuala Lumpur. We kinda do the celebrations differently in Malaysia but one thing is sure, the gist of the dinner is still the same like a traditional Thanksgiving - to give thanks and express gratitude. This time round, the Chans were doing the honours for friends who have supported their restaurant, Chef Choi at Jalan Ampang. It was indeed a privilege to be invited for the dinner, where I managed to meet new friends who are also fellow foodies and catch up with old ones too. 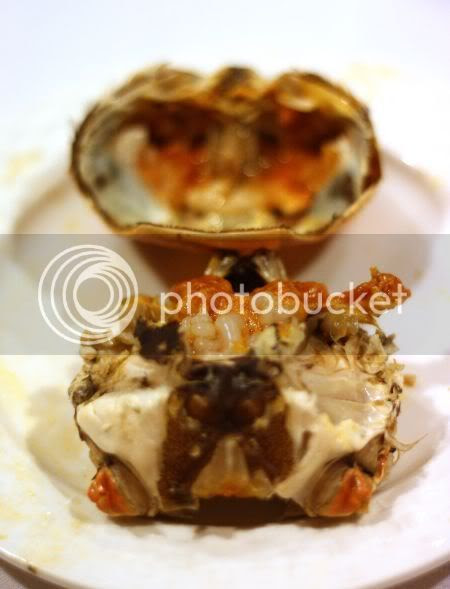 creamy decadent roe from hairy crab
Unlike the typical sit down Thanksgiving meals with a roast turkey, the sides and a pie, this was by far the most unusual variation I have eaten. Literally an east-meets-west version, we started off with some crunchy siu yoke as a starter and the restaurant's own-made chicken liver pate with some crackers. 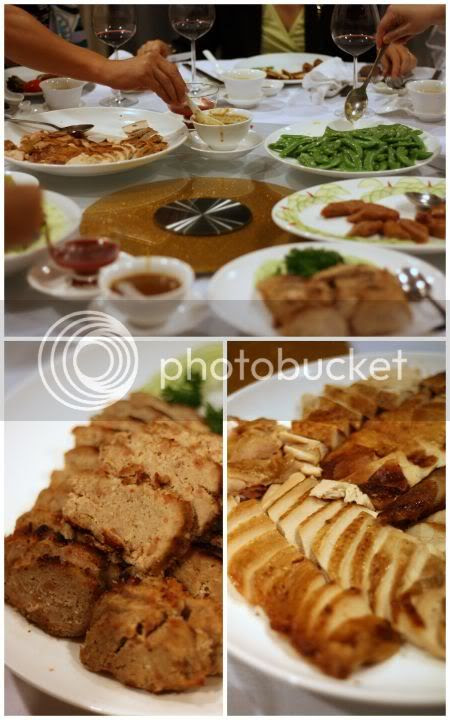 1. help yourselves on the turntable, 2. roast turkey, 3. divine stuffing
Once everyone gathered, it was time to meet Jerry! Since the menu had mentioned a "jerry fish" we were all curious on what new specimen it will be. Turns out he's just a crunchy bouncy jelly fish thus named because they messed up the spelling. Anyway, dear Jerry was out for a surprise, since Tom the turkey (his old nemesis from the ever famous cartoon) was just two courses away. 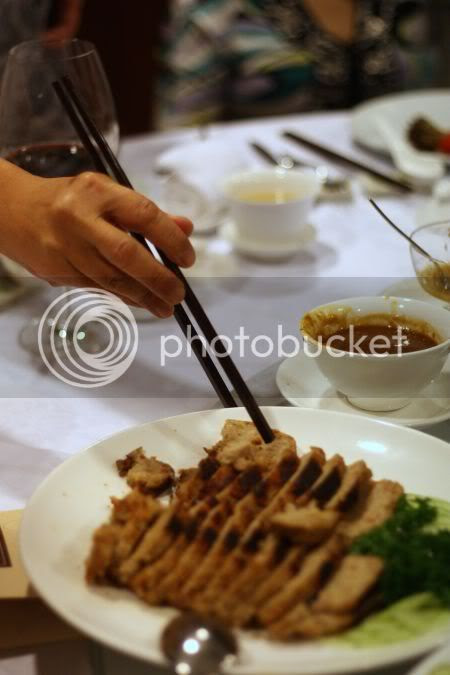 We even managed to get a taste of the hairy crabs - incredibly decadent creamy technicolour orange roe that you scoop up and relish. Once you have devoured the richness, it was time to slowly enjoy the sweet crab flesh within. Usually people only eat the roe but due to the crazy prices for these fluff covered crustaceans, we also eat the sweet tasting crabmeat rather than throw it away. After enjoying the crabs, a must is the hot ginger tea to get rid of any "wind" from consuming the crabs. I loved the strong hot ginger tea served to us and could have just drank that the whole night if I had an option. 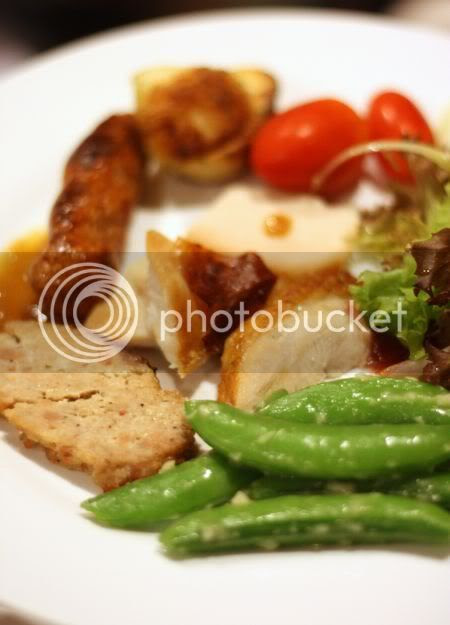 the beautifully decorated plate of goodies

Next it was a prawn bisque followed by the main star of the dinner - Tom the Turkey and his co-stars: divine stuffing, sausages, roast potatoes, salad and sweet peas cooked in a garlicky sauce I couldn't stop eating! Served on platters and placed on the glass turntable, there was an air of communal sharing (kinda reminds me of Chinese New Year!) with everyone helping themselves. While forks and knives were available, some were even using chopsticks to pick the food. In fact, I ate my turkey dinner with chopsticks!! 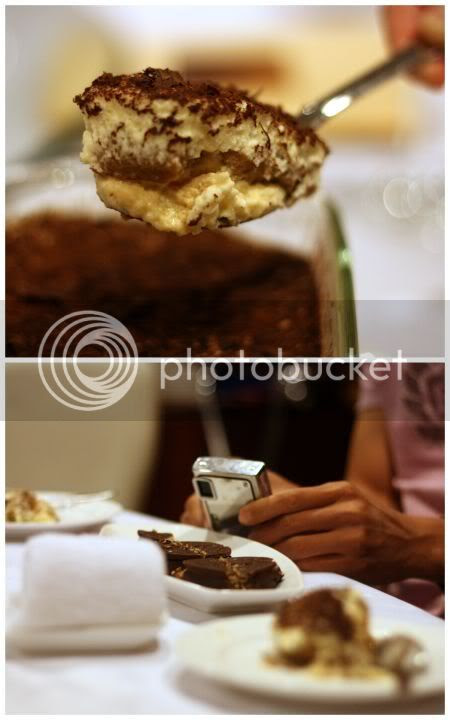 1. lightest ever tiramisu, 2. cameras were welcomed of course to take the gorgeous alfajores from Argentina

Last but not least, we wrapped up with dessert - Chef Choi's signature tiramisu that is light and fluffy. The secret we discovered to its incredible lightness - only beaten egg whites are folded in and there's no mascarpone cream. Simply gorgeous! As another treat, Alfajores (chocolate sandwich cookies with a dulce de leche centre) all the way from Argentina was shared by my friend S, who had just visited the place a few weeks back. She gave me a stash too and I have been slowly savouring them as they're incredibly good.

Thanks so much to the Chans for the invitation! Happy Thanksgiving everyone!

not so unusual for Thanksgiving, you still have the turkey!

i would be very 'thankful' if i was there for this meal :-)

slurps!! cant rmbr the last time I had turkey...hmm...

I would be celebrating thanksgiving I it were celebrated with this meal! Every item looks equally delicious and tell me what you want from my cellar to trade for your alfajores dulce de leche or classico.

oh my, look at the siu yoke! i'm hungry! haha

i celebrate thanksgiving with seafood, no turkey :)

I'm sure you had a satisfying and stuffed thanksgiving! haha...

so sad i missed it! evermind.. next one.

foodbin - yup, turkey is a must with gravy and cranberry sauce or else I guess Thanksgiving misses the Happy Turkey Day name.

sc - it was, mix of Chinese and Western cultures. Oh, we also had red wine with the meal plus Chinese tea.

Happy Thxsgiving Paps! It was fun, eating it with chopsticks, since u end up eating it very daintilly vs chomping it down.

Keropok Man - indeed, I was also thxful to be invited. Hey, when r u ever coming up to KL? We shld do BKT.

thenomadgourmand - yearly thing for me, as we usually get turkey for Xmas.

brad - seafood is good, as long as there's good food, it's always a big celebration.

eiling - thxs, it was fun but I decided not to eat too much or else, I won't sleep.

Jules, Happy Turkey Day to you too!

drat! missed out! did you say there's no mascarpone cream, or no cream?

I like the idea, siu yoke for Thanksgiving. Should try it for Christmas

This blog give an stupendouys idea of what I could cook for my dinner anniversary. I just hopoe to get the same result as yours.