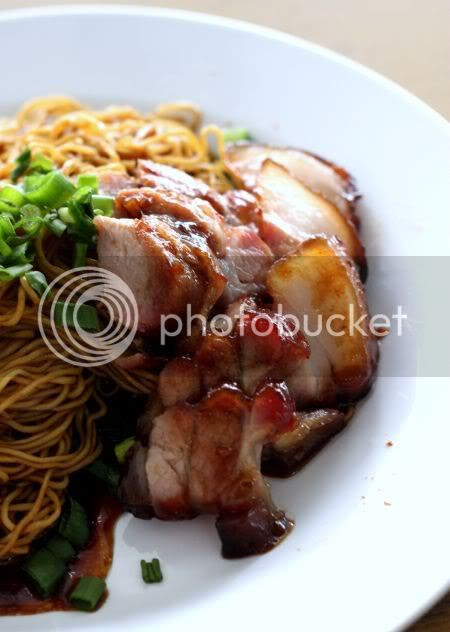 chunky melt in the mouth char siu pieces are the highlight here
It's sad, when a legendary place like Ho Weng Kee in SS2 closes down. The owner has been threatening to retire for quite some time and he finally did so, supposedly due to his poor health. Taking over their former space is another famous char siu wantan mee place that used to be at Section 17 Restoran Mel's Corner. It is thanks to one of my blog readers aka carsam carsam, who informed me of this change. He wrote about the Section 17 noodles for the Knife/The Star's competition on food places. 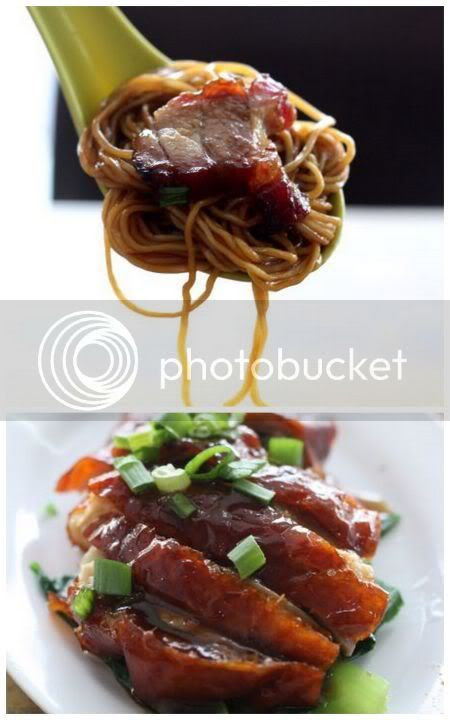 1. one mouthful to go, 2. roast duck
Nothing much has changed here except the shop is now called Chan Meng Kee (the owner's surname is Chan). Previously in Section 17, the stall only sold char siu wantan noodles, here they have expanded their selection to include roast duck, curry noodles, ngau lam noodles which is quite similar to Ho Weng Kee's previous offerings.
Tastewise, the char siu was very good - chunky melt in the mouth pieces with a generous portion of springy wantan noodles for RM5. The wantans on the side, wasn't as tasty compared to their days in Section 17 (a lack of dried sole powder) but was still quite decent. I thought the roast duck (RM5 for one portion) was average tasting - not much meat and instead all I got in one mouthful was a lot of skin. Nevertheless, I'm curious to return here and try their ngau lam (beef brisket) noodles and curry mee to compare it with Ho Weng Kee. I doubt the old owners pass their recipes to these people, as when I asked them if they were given the recipes, they kinda ignored me. So sad, since those recipes will be lost forever.

Chan Meng Kee
32, Jalan SS2/66
Petaling Jaya
(Non Halal. Open for breakfast from 8am to 3pm daily except Mondays. Next to Piau Kee seafood and same row as Lorong Seratus Tahun.)
*Disclaimer: The opinions expressed here is entirely based on my personal tastebuds and may vary for others. This review is time sensitive; changes may occur to the place later on that can affect this opinion. The reviewer also declares that she has not received any monetary or non-monetary compensation from this place for writing the review.
Tagged with: Malaysian Food+ Wantan Noodles
Posted by boo_licious at 8:14 AM

Awww... that's really sad if the recipes are not passed on. It's like part of our (yummy) food culture will be lost forever... :(

sigh..i wish I havent procrastinated and gone to eat at Ho Weng Kee one last time be4 it closed!

Read abt this Mel's corner WTM but havent tried. Well, time to make a visit!

During the 70s, Ho Weng Kee was located near by Petaling street. My mother picked me up from school, MBSKL. We took out wantan mee for lunch. My favorite was the pork ribs. I visited Malaysia last year and saw Ho Weng Kee in PJ. It was too bad that I had lunch already and it was my last day in KL. I didn't get a chance to eat their noodles. There was another famous wantan mee restaurant called Koon Kee closed by Rex cinema. I am unsure if they are still around since this is more than 25 years ago.

Alex - time to do a Fried Chillies review.

Meng - wow, that is a great walk back to memory lane. Koon Kee is still around for now. You must visit when u're back.

thxs neutral daily for the tip.

sh - I've tried the one in Dsara Uptown and it wasn't too good. Not done the Dsara Jaya one but it seems to be more famous for the claypot rice at nite.

Boo : The Claypot chicken rice has shifted out from the Koon Kee @ DJ. They have their own restaurant now. Both Koon Kee's WTM not too good. Prefer the one down in SS2, same street as Kayu, on the opposite end :)

Will definitely give the new Weng Kee a try :)

but even if they did pass on the recipes to them, i doubt they'd admit. for the one thing they dunwan ppl to say is that, they're plagiarizing the former's recipes, in stead of coming out with their own.

Unkaleong - thxs for that info. Where are they ah? The wantan mee u like is Restaurant OK, nice stuff also.

j2kfm - I doubt they did get it, as I imagine they'll proudly claim they use back the same recipes as that is what people prefer.

The char siew looks delicious. Tender and moist with just enough stickiness. Making good char siew is one of the endangered arts these days !

their mentor is char siew chai presently operating next to Restoran Loong Foong in Paramount Garden-give him a try.

i went by this place this week! i had their prawn wantan kuey teow. Was disappointed. :( The one at Soo Kee in seapark is lots better!

Grace said...
This comment has been removed by the author.
9:30 PM

Seems like Ho Weng Kee is moving to Lot 10.

You may refer to this URL:
http://www.ytlcommunity.com/commnews/shownews.asp?newsid=48136

Borneoboy - yup, it's an artform that needs to be preserved.

Foodbin - ah so! Thxs for the tip. Will go trace that mentor/mentee thread.

Sharon - Prawn wantan kuey teow? Are we talking abt Chan Meng Kee or Chan Toong Kee? They're both on the same row, also as Chan Meng Kee does not serve kuey teow.

Grace - thxs for the info. I did read abt that food court, seems they will have Soong Kee, Kim Lian Kee Hokkien Noodles also. Didn't know it includes Ho Weng Kee.

so sad to find out Ho Weng Kee is closed in SS2, and if it's really true they will open in Lot 10, that's just too far! I wonder what will the price be as well...

shit! I'm so hungry and the char siew looked so juicy and succulent!

darn, i didn't know about the change in ownership until i read ur blog.. thanks for the info :)