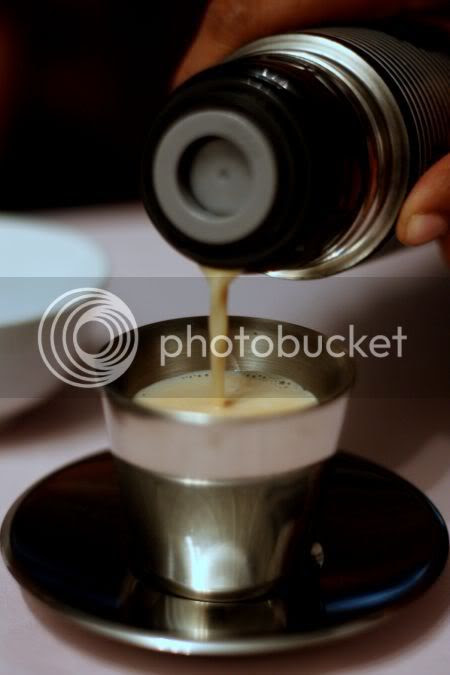 we love their smooth and rich tasting Tibetan butter tea, which comes in a flask to keep it warm (RM12.80 for 1 litre)

Tashi Delek everyone! That's auspicious greetings in Tibetan that you can find in Kechara Oasis' menu. Although it is labeled as new age vegetarian cuisine, their chefs were sent to Tibet to receive some culinary training. Loads of that written up on the Net so google and find videos by Ho Chiak!, invited food reviews and etc on this place tucked in Jaya One's carpark! 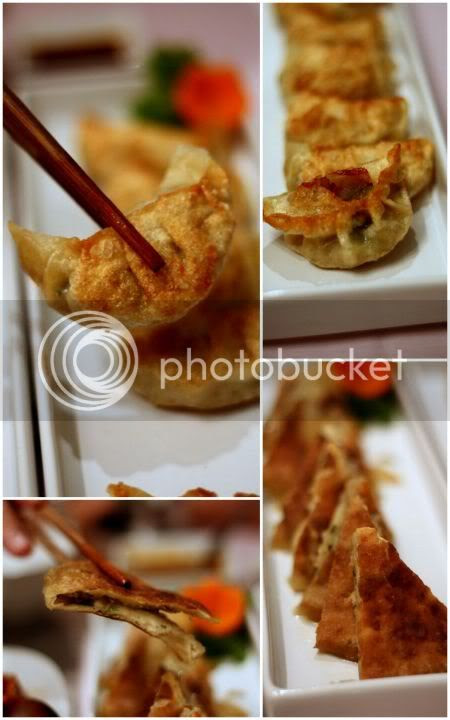 We zoomed in on the Tibetan goodies on the menu, which ain't much and consists of ando yak beef, momos, camel meat with butter sauce, shabalay, tingmo (steamed buns served with a special sauce), asa bhima, tibetan baked bun with fillings and tibetan butter tea. Not being able to order everything, I settled on the momos (the main reason why I wanted to eat here), the shabalay and the butter tea. I decided to mix and match the food with the other vegetarian choices like the fried noodles and a sweet and sour mushrooms (I love sweet and sour!). 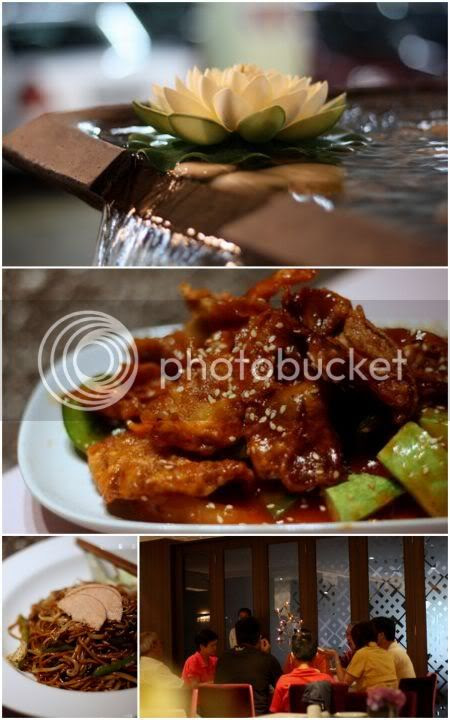 Before the meal, they served us a complimentary clear soup, which according to Splashie Boy, "tastes just like what your mother makes at home!". We were served on tibetan butter tea in hollow metal cups from a flask to keep the tea warm. I can imagine it'll taste awful when cold but drank hot, it was very good. Smooth with just a hint of butter at the end.

I wanted to compare their momos (6 for RM21+) to the Khukri (the Nepalese place in KL, which I never did blog about despite visiting it during an FRU raid) but to be honest these ones just didn't make the cut. Shaped like gyozas, they're steamed and pan fried till crisp. The vegetable filling within just didn't have any oomph at all and if it wasn't the chili oil dip, it would be absolutely tasteless. Note that although Khukri's version is shaped like small xiao loong baos instead of gyozas, this does not mean this version is not genuine as in Nepal they shape them both ways per my friend who has been to Kathmandu.

Next was the shabalay (RM18), a kind of crispy pancake with potato fillings, which came with a curry dip. We both felt this was a little too oily and again not much taste unless you dip it with loads of curry sauce. The dry fried noodles (RM14 for a small portion) was pretty good and tasty with some vegetarian ham on top and while the sweet and sour sauce for the mushrooms (RM17 for a small portion) was not as good as the one I love at Chef Choi's, this was pretty decent.

Honestly, I thought the food was average tasting only as the Tibetan cooked items just didn't "wow" me at all. The only item I really liked and thought was very good was the smooth and decandent tasting Tibetan butter tea. Am not sure if it is just my tastebuds as I've read glowing reviews of this place from others, so I may be wrong or may be I'm not so into vegetarian food? Larger pictures are in my Flickr set.

Tagged with: Tibetan+Food + Jaya One

hmmm... maybe I should just go there for their butter tea... also the vegetarian dry fried mee + mushroom

i've tried butter tea in yunnan and it tasted rich and smooth. i likez! they served us ground nuts too, to be taken before drinking the tea.

they are having promotion for lunch, isn't it?

Hmm I can't really say this is rocking my boat... I am however intrigued by the butter tea for purely nostalgic reasons. One of my dad's old eccentric approaches to beverage making was to add a slab of butter into strong tea he would brew over the stove!

Butter tea sounds nice, would love to try this place out. Tibetian food are certainly new to me, read through your post and realized most names are new to me.

Gotta say this again, there're so many eateries around Jaya 1!

i've seen that tea being served in Tibet, frmo yak's milk or something.

special from the rest, but vege only? alamak, may not visit lest there's no other choices in Jaya One.

My sister ran a food business for a while in delhi, and the momos were ¡Wow! (closed now, sorry) ...they have to have a lot of flavour even without the sauce, so these guys are not getting something right.

P.S. have to get the recipe out of my sis!

Never even thought tibetan restaurants existed outside Tibet! I am tempted to give it a try though!

Thanks for the link :P Now I know that "roti canai" is called shabalay, hehe ^.^

Malaysians:
While looking up food courts/places to eat in Hong Kong, I found that Wikipedia does not even have Malaysia on its List: no 1 place for street food!!!!!!

Or is it being kept as a secret?

I have never had Tibetan food before. The fried foods looked pretty, the lotus flower looked pretty, and the restaurant looked pretty. I am wondering if this food isn't very good, but there are good Tibetan dishes to be had somewhere else? I don't know of any Tibetan food in the USA, but I am tempted to try it if there is ever a time when I am near a Tibetan restaurant.

leo - I reckon just drink the butter tea only, as I felt other food also so so only.

foodbin - no idea but that day when we ate there, it was the 15th day so people were dining there since they were vegetarian.

babe_kl - good idea, I guess but I was looking for someone to make momos hence I was trying out their dishes.

550ml - oooh, that sounds so good, the butter addition. Maybe you just drop by for a cuppa here but be prepared as its a lot for one person or even 2 persons!

sugar bean - loads of places there, so little time though to try them out.

6th sis - I love momos too but not these ones. Guess I rather eat the ones at Khukri.

j2kfm - shld be last on yr list for Jaya One!

nomadgourmand - can put it on that list of "I'll try if I ever am desperate?"

Wow bawa, yr sister's momos sound so good. Do get the recipe and pass it down.

Hazza - hmmm, I was also surprised to read abt this place from ho chiak!

bawa - go edit wikipedia and who knows we'll be no 1.

Lannae - well, I guess Tibetan food is not everyone's cup of tea hence this place fell short. There's another Nepalese place in town, run by the immigrants that serve better food though so this one fails in comparison of taste.

i went to try out the restaurant after reading ur post...my personal opinion on the butter tea, yes it has a very smooth and buttery taste to it but its a disappointment to me coz im a sweet tooth person :P and i initially expected it to be sweet...and after 2 small cups of the tea, somehow it made u feel really full...oh but the spring rolls there are awesome!!!