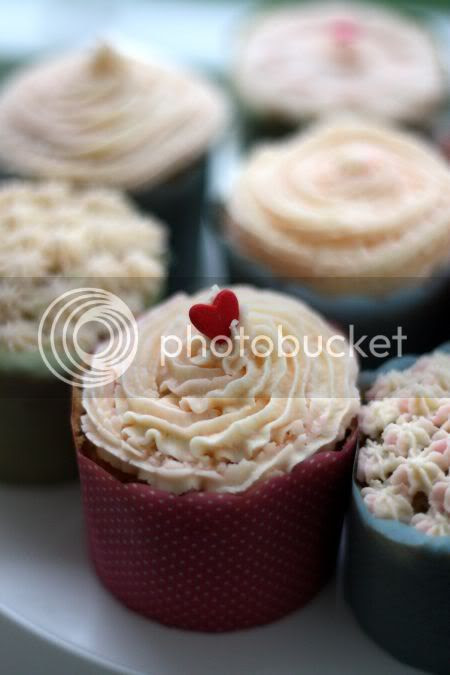 Regular readers to this blog will know, I usually celebrate my million hits count by making some homemade treat for friends. This time round, due to work commitments, I let my 3 million hits go quietly by and pushed celebrations until yesterday when a small group of us got together. 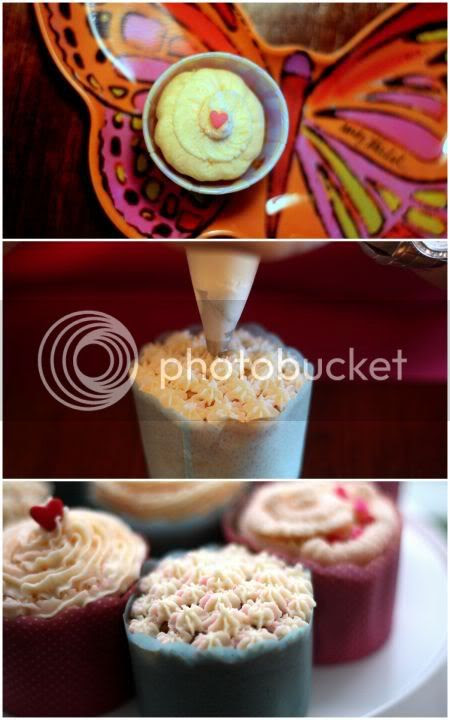 1. cupcake meets butterfly, 2. here's how you do it with muruku piping skills, 3. pretty as a picture cupcakes with barely pink buttercream
When it comes to baking, I've no problems churning out baked goodies but ask me to frost or make anything pretty, I shudder as first, I lack the patience to nicely ice anything and second, my hand has a teeniest tremor hence my piping skills is slightly shaky. Hence when Lyrical Lemongrass said she wanted to decorate cupcakes, it sounded like a perfect match. Baking on Sunday morning didn't yield perfect results - vanilla cupcakes in large muffin-like but very pretty polka dot cases I had discovered in Bake with Yen Puchong, teeny weeny chai cupcakes that didn't taste like chai even though I used 2 bags of Gryphon Straits Tea Chai, buttercream that died on me (the eggwhites didn't see to rise, probably because I dripped a little egg yolk) and a new cake, blueberry tea cake from Bill Granger's Feed Me Now! cookbook. 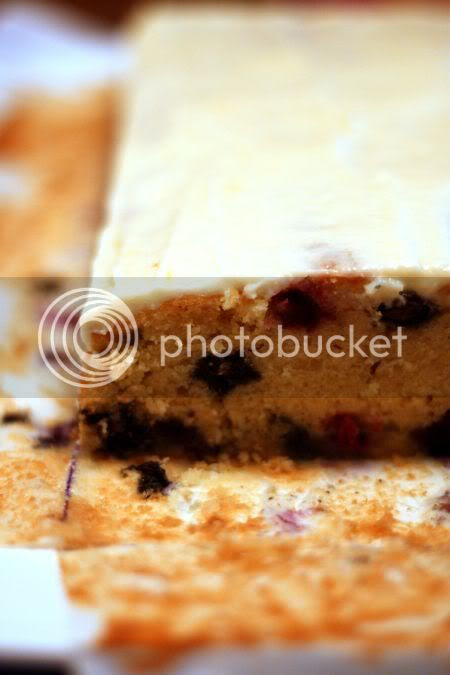 the gorgeous fluffy and slightly rustic blueberry tea cake courtesy of Bill Granger
We gathered at Paprika's place and discovered Lyrical Lemongrass is a pro in decorating cupcakes as she's been honing her skills on muruku making. Believe me, she can make perfect circles with her steady piping hands and give any professional bakers a run for the monies! Under her skillful hands, my cupcakes became uber pretty with a barely pink buttercream whipped up by Paprika. 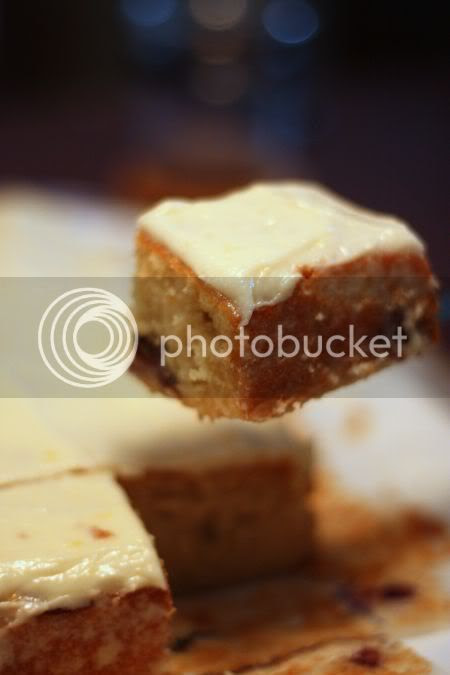 rise, oh mighty cake.....levitation skills by Paprika
Suprisingly the cake of the moment was this "first-time attempt" - the blueberry tea cake with a cream cheese frosting from Bill Granger's new cookbook, Feed Me Now! It calls for seasonal blueberries (currently going for a very reasonable RM9.90 at Cold Storage) and sour cream mixed with soda bicarbonate to give it a fluffy, moist and light texture that had all of us clamouring for seconds. In the midst of cutting cake, we also discovered Paprika's hidden skills - she can make cakes levitate in mid-air even better than David Copperfield!
It was a great afternoon, a little hectic in the morning churning out cakes but so fun to see someone else do the decorating. Thanks to Paprika, Hunky and Lyrical Lemongrass for celebrating with me. Last but not least, thanks to all of you readers for clicking away on this blog and keeping it very alive for me to even celebrate this way. I'm enclosing the blueberry tea cake's recipe below, so enjoy making it! For more fun decorating pictures, see my Flickr set.
Blueberry tea cake (adapted from Bill Granger's Feed Me Now! cookbook)
210ml sour cream
1/2 teaspoon soda bicarbonate
180g butter, at room temperature
250g sugar (original calls for 330g sugar but I reduced them for my cake)
2 teaspoons finely grated lemon zest
1 teaspoon natural vanilla extract
3 medium eggs
250g fresh or frozen blueberries
375g plain flour
1 1/2 teaspoons baking powder
cream cheese frosting
250g cream cheese, at room temperature
100g butter, at room temperature
1 teaspoon finely grated lemon zest
1 teaspoon natural vanilla extract
200g icing sugar, sifted (I reduced it from the original 250g)
Preheat oven to 180 degrees Celsius. Grease a 23 x 33 cm baking tin and line with baking paper. I cut the paper a little longer on the sides, so I can lift it up from the pan and peel it off after it cooled down. Mix the sour cream with soda bicarbonate and set aside for 5 minutes.
Beat butter and sugar in a bowl until light and creamy. Add lemon zest and vanilla, beat to combine. Beat in the eggs, one at a time and add the sour cream mixture (which would have puffed up and became fluffy!) and mix until evenly combined. Put blueberries into another bowl and toss with a little flour. Sift the rest of flour and baking powder over cake mixture and fold to gently combine. Gently fold in the blueberries. Spoon mixture into tin and bake for 45-50 minutes or until skewer inserted into the centre comes out clean. Leave to cool in the tin for 10 minutes and turn onto a rack. Alternatively you can let the cake cool in the pan and remove by just plucking it out with the longer sides and peeling the paper off before icing the cake.
To make frosting: Beat cream cheese, butter, lemon zest and vanilla together in a bowl until light and fluffy, then mix in icing sugar until smooth. Top cake with frosting or you can even do a lemon drizzle where you just melt icing sugar with a little lemon zest and lemon juice to drizzle over warm cake.
Posted by boo_licious at 7:20 AM

Congrats and great wishes to another million hits in the near future.

"sweetie, pass me the champagne!"

Congrats! Would it be too much to ask for a small slice of cake now? Hehe

BFF sure is skillful. Will wait and see what she'll come out for her Bento challenge. Happy Monday!

Congratulations! 3 mil is a lot! Keep up the good work. Will be visiting often. :)

The cupcakes are nicely decorated. So much fun and came out with something nice too! ^^

It's so delicious looking and tempting too! Will you invite me for the next 1 million hits>?!! Hehe... Congratulations!

Awwww, thanks for giving me the opportunity to decorate your delicious cakes! And happy 3 millionth! (Just realised that I've celebrated all the "millionths" with you...cupcakes, ice cream and more cupcakes!) :-)

congrats boo! here's to many millions more to come!

liked the photography skills u put in the "levitational" cake..did it float all the way to the mouth after that?

Congratz on your 3M hits! Feel great to see so many good foods in your blog.

Congrats! Those cakes are lovely

3 millionth! wow, boo, this is why you are my idol. bow bow bow...even if you minus one zero, i am miles away from hitting 300K, let alone 3m.
thamby sure is skillful huh!

based on appearances alone, u guys could give delectable, bisou, just heavenly pleasures, etc a run for their money if u ever go into the cake-making business!
congratulations, and i hope to still be reading when u celebrate your 30th million and onwards! :D

congratulation! and wish u have many more hits (blog hits) to come.

ur cuppies are pretty!!! and u can deco them so well!

Gratz! Wish you have more hits in the future!
OmFg~~ the cup cakes are so beautiful~ and look so sweeett.

Joining in the chorus of CONGRATULATIONS!!! What a gorgeous palate of pastel buttercream! I feel like repainting my room in these shades now!

may i know where to get the polka dots pink paper cups??? they are cute!

congrats!!! keep up the good work! Hope that one day I will be able to taste ur cupcake creation.. lol!!! don't leave it all to Splashie Boy only... lol!

uhh uhhh, hey KY how u? been a long time! congrats...lol. u r up there with DrM and RPK man! lol.

Congrats Boo! May you have many more millions!

congratulations on the hits and the popularity of your blog.... your blog is trully amazing and you deserve it...

the cupcakes looks gorgeous, i wish i could have some of them now..

Thanks everyone for the well wishes.

Monkey - am sure someone's bento challenge will be excellent.

Joe - Paps is the magician!

Sean - we're not pros. Those fellas are trained chefs, I'm just a beginner at all this.

550ml - do a raspberry ripple colour, very nice and sweet.

Ai Wei - I bought them from Bake with Yen's shop in Puchong.