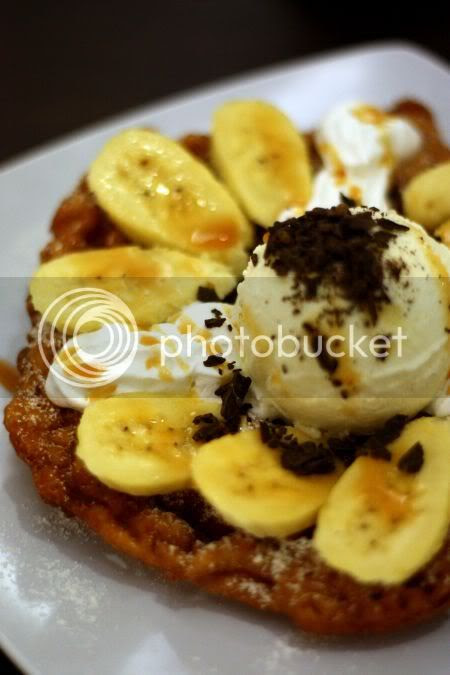 the light as air banana caramel funnel cake, which we both love to bits

Confession time again! It has been ages since I dropped by 1 Utama. I must admit I absolutely hate battling with loads of people for a carpark space and jostling with others when the mall is packed. While I have found one way to easily find a carpark space during weekends, it still does not mean I'm ever eager to drop by this minefield of people. 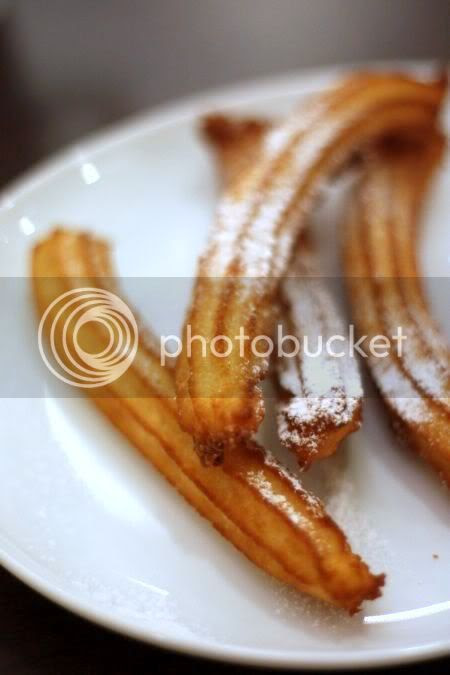 let's go spanish with these churros

After a long absence, we finally braved the traffic and ended up here to sample these unusual snacks for a quick dessert. I have had this small place in my "to-do" list for the longest time ever but never got around to it until last weekend, when I finally got some time to r & r away. Located just opposite Cold Storage, this small store serves interesting churros (RM5.80) - that Spanish deep fried snack one can never get enough. Best thing about these "doughnuts", like some term them, are they're made fresh and as and when you order them. Crisp on the outside, these were nice on their own sprinkled with cinnamon sugar or dipped in molten chocolate lava. While the texture of the churros was nice, we were a little dissapointed with the watery and lacklustre chocolate dip we received that just didn't add any oomph!

Instead, we found our epiphany with the very unusual funnel cake they served here. Made from a flour batter that is drizzled in hot oil to form a flat cake, the funnel cake (RM8.80 for the banana caramel ice cream) won us both over with its light as air but crunchy texture. Simply heavenly with chopped bananas, a drizzle of caramel and vanilla ice cream. Only problem would be to eat this elegantly, so don't order this on a hot date, unless you don't want a second date with that guy or gal ever again. The stall also does roti paratha, thick toasts, various flavours for churros including ones that have fillings, glutinous rice, cupcakes and etc. Seating is quite limited within the area and some tall tables outside.

Others who have also eaten here:

Another place which I haven't heard of in 1 Utama. Is it new? The funnel cake looks SO delicious. Bet it's really good. Yeah, hate to look for parking in crowded places, makes me lose my temper. Haha!

I love the sound of confession time! hahahaha. btw i'll like to say you are really really good blogging almost everyday! keep them coming yeah :)

walked pass this place many times, but never tried... hmmm think i'll do it this week! :)

This is my "snack-between-work" place when I'm in the mall.

Totally agree with ya on the watered down chocolate dip. Hence why me and my colleagues always end up ordering the regular cinnamon sugar version.

Never got to try the funnel cake yet tho. Banana? Munkey like!

mmm...funnel cake always makes me think of carnivals in the states...

sugar bean - not very new I think but probably forgotten since quite hidden.

Brad - I confessed, was feeling a little disillusioned this week...need to find new exciting stuff. Hopefully I get lucky tday.

alexandra - hmmm,I never did eat funnel cake but it was toffee apples for me at the English carnivals.

After a long slumber, my sweet tooth awakens at the sight of that funnel cake! I am so excited, even if this means I have to drag myself to a mall for this!

a new place this is???!
and the churros seems interesting! and that funnel cake is heart alluring!

wow, i don't recall seeing the funnel cake on the menu. i hadn't been planning to revisit this place, but now it looks like there's a good reason to! :D

hate battling for carparks in 1Utama?? Don't worry, you are definitely not the only one.. that is why I will be here around 10am... 11 am the latest!
Actually it's within walking distance from my house but Jenn hates the heat from the sun :)

These churros are equivalent to the local crullers with a touch of class.

its one of my fav dessert in the world! tried making it once but all came out crooked hehe

I miss funnel cakes! Haven't had them in a while. Do they have it with strawberries? Missing the one's served at Wonderland!

550ml - LOL, go early or be like me, find sneaky ways to park completely legal or else the mall parking will definitely turn u off!

ai wei - not so new I think, opened the same time when Cold Storage opened here but probably too small for people to notice.

Leo - we do that too sometimes, go super early to avoid the crowd!

worldwindows - I wonder if our yau char kuih guys can make them? Am sure it will be a winner.

Lianne - make it smaller so less crooked? I had mini ones the other day that were yummy too.

Kwong - they do serve it with strawberries. I think that was per the Star review I read with ice cream.

thenomadgourmand - Happy Birthday! Ask unka to bring you and if he wants to know what is the secret to parking on a busy weekend, ask him to sms me.

I had the churros last week, but wasn't impressed. Like you, I thought the chocolate dip was diluted! =(

bangsar-babe - yeah, was way more impressed with the funnel cake.