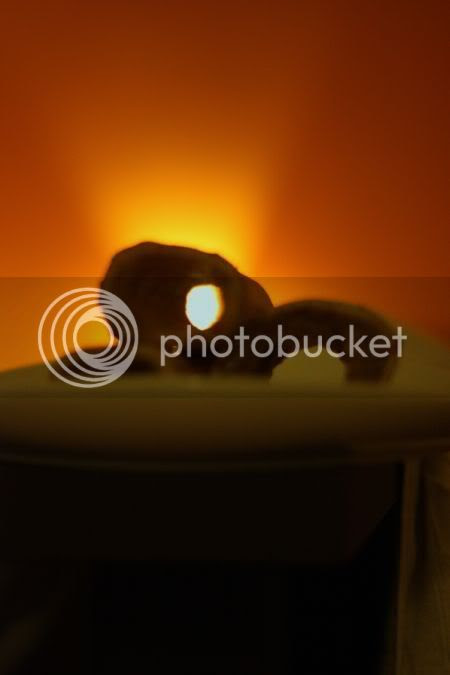 apa ni???? answer the riddle to get some personal satisfaction

Let's shake up the week with something different - little notes on dining related news and a riddle for all of you, especially dedicated to those whose brains are rotting away in the office. Time to crack those brain cells, people and guess what is the picture all about???? No prizes though since I don't have any sponsors but give yourself a big pat on the back, if you scored correct.

Saw that Maredos Steakhouse in Bangsar has closed down, replaced by a interesting named place - Banana Jones. Looks like a banana leaf rice joint, hence I guess the banana reference. Not sure where the Jones part came about unless Indiana Jones aka Harrison Ford is a shareholder? Red Ginger at Plaza Damansara is also gone (I think the one at Northpoint is still around) and replaced with place called Daddy Kitchen. The char kuey teow man in Restoran Seng Lee, Damansara Heights has re-located to Section 25, Shah Alam. Instead, his daughter has taken over the Damansara Heights' stall.
Heard that Cilantro will re-open end of the year, after Micasa finishes their renovations. No one knows what is going to be the arrangement since Sage is now opened and Takashi helms the Chef's Table every night. I guess we will have to wait and see. WIP in Bangsar Shopping Centre closed on 22 February, with a lot of fanfare - they're shutting down to renovate the place (the whole side of that wing has also closed for renovations) as it seems they found their concept. Enter the contest to name the new WIP and win a free dinner for 4 pax. Seems Il Divo of Desa Sri Hartamas is moving to Ampang soon. I guess works are in progress as on Monday, the Italian joint was closed. Sounds like bad news for Desa Sri Hartamas as it has been quite quiet there ever since Solaris opened their doors.

Read that Prive, that hot place in Singapore is opening an outlet at the GTower in Jalan Ampang sometime in the fourth quarter of 2009. From their website, it says that the restaurant will be on the 28th and 29th floors. It also includes an al-fresco rooftop lounge called Modern Alchemy. Sounds like it will give Skybar a run for their monies? Also found while flipping through the pages was the news that we can expect a new Italian joint by Paolo Guiati, the guy behind Nerovivo around Changkat Bukit Bintang in the very near future.
And finally, from now on, there will be a change to how we dine i.e. book ahead to earn points! The Qguides has launched their online booking system, which I had the privilege to beta test last week. A boon for those who hate to wait at the phone, the online system will work with SMS and email confirmations. Believe me, it works as I tried it out last week as long as you book at least 30 minutes ahead. Best of all (for all of us who love great bargains!) they do a reward system - book with them and get cash vouchers back. At the moment, they have 20 restaurants and hopefully more will jump on board with them. It is definitely a very revolutionary idea and it disciplines us to plan ahead (something I rarely do I admit) but with freebies as the dangling carrot, I may change my mind and join the club. The site also carries a list of places to eat, nicely segregated to different types of cuisines. Something great for foodies, as it will be a source for information even though it is not comprehensive.
Posted by boo_licious at 12:00 AM

yeah prive is a very nice place! i been there twice alredy, and will certainly go back again. haha didn't know they are gonna open a branch in Malaysia. good for you all over the other side :)

WOW! That's a lotta news to digest at such an early hour of the morning ...

Signed,
One of those whose brains are rotting away in the office

brad - hope it will shake up the Msian dining scene a bit.

Julian - "throws Eno packet at him, to help digest all those news"

LL - Aww, jumpstart that brain! Clue No 1: it was once featured in a TV show by some fella u mentioned recently in your blog.

fbb - nope, sorry and it is also not cheezels. Hint, it is popular with Western chefs.

my brain fails me again :(

What are those? Roller coaster snack izzit? haha

I also guess cheezels but too flat wat..

leo - aiyah, try and guess? Or maybe u go get some fish for lunchie since it is brain food?

ciki - neither can I, Prive sounds very cool and interesting esp the mixology bar. LOL...not roller coasters even though those are Splashie Boy's favs.

LL - no wor, related to that sharp tongued fella u featured in your blog.

LL - oooooh, sounds yummy but nope it ain't. This is a pork free item.

cos LL featured bourdain before and he at it in singapore at haji kadir! ;)

cos i was there wif ciki last week..hehehehe...

boo, i saw tablescape the other day and they used bone marrow as a salsa dip! omg! ;)

fbb - aiks! so many rings??? hmm, I wonder what deep fried elephant intestines look like but they ain't these babies.

bravo nic...u get a big pat on the back!!! I kinda suspect you will guess it since you mentioned to Ciki on Sunday.

Noted nic(khkl) won your pat. Bone marrows? U purposely stacked them up to photograph?

btw i think changkat bkt bintang (and its surroundings) is the most exciting spot right now ... at least five new places have opened in the past month! delucca (italian place on one residency opposite no black tie), nerodeli at somerset, engka portobello (pork knuckles, ribs, chops, belly, etc!), pinchoa and el cerdito (both specializing in non-halal tapas). frankly, when anyone asks me where my favorite area to eat is, i can't think of any better reply!

wow you really go all out to update the foodies community huh? :)

a great effort. thanks.

tummythoz - hahaha, yeah they make an interesting pix after we dug it clean.

Sean - yeah, that area is very happening. Read yr review abt delucca not being impressive though, couldn't leave a message though as my pc takes very long to register the image I need to key in before my msg can go thru.

j2kfm - yeah, more like the place and the way we shot the pix, hence it had the glowing feel to it.

hey boolicious,
the char kuey teow has re-located to Section 25, Shah Alam. Do you know which restaurant he shifted to?

thow - the daughter mentioned the shop was called Yau Kee. Hope that helps.