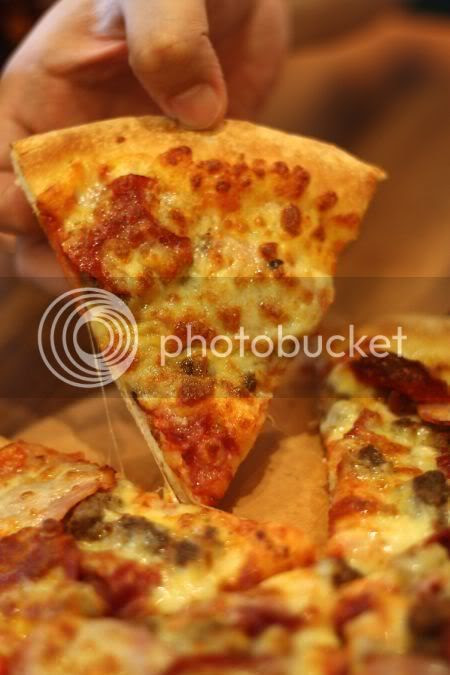 Mention fast food and Splashie Boy's ears will prick up. He's the fast food freak among both of us and won't hesitate to eat it the whole week, if he had a choice. Thus, when it came to deciding where to eat last weekend, he picked Papa John's, the pizza place he has been dying to try out. Another of Berjaya's new franchises (they also have Wendy's), currently the only outlet opened is in Berjaya Times Square. Next should be IOI Puchong.

I was sceptical at first but hold on, the outlet was packed to the brim with people that afternoon! Kinda gave me hope, as honestly I wasn't impressed when I saw the menu. I was keen to go all out for unusual i.e the Texas Heat, which sounded very promising with jalapeno peppers, green peppers or capsicums and beef bits. However, Splashie Boy wanted the Super Pizza, hence we compromised and went for the All the Meats. 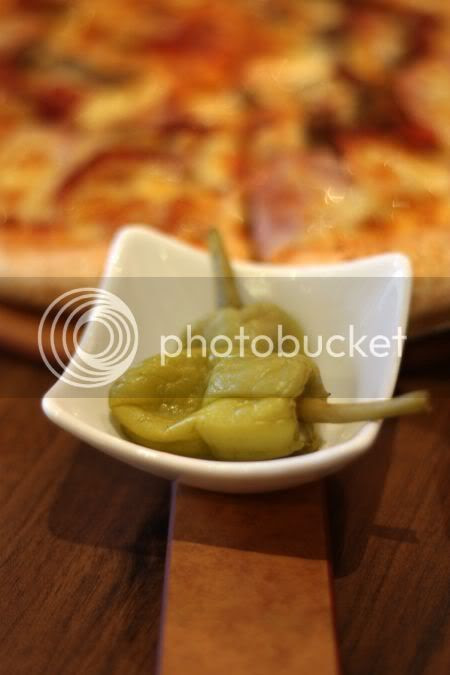 my fav peppers - tangy and yummy

While waiting, I was busy reading on Papa John's. Their tagline, "better ingredients, better pizza" is said to be due to them using fresh dough and unlike the boring run of the mill pizzas, here they serve these green pepperonici peppers and a garlic sauce dip with the thick crust pizzas. 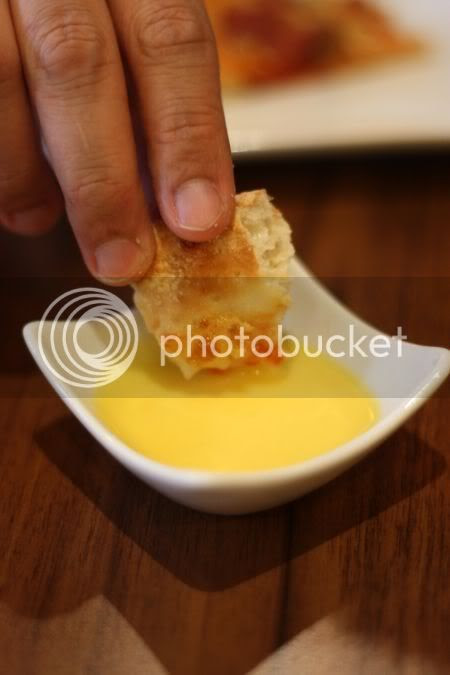 don't throw away the crust, use it to dip into the garlicky butter sauce - warning though, it is very high in fats and cholestrol!

I loved the not very spicy but tangy peppers, wish they gave more as they were kinda addictive. You dip the crust in the garlicky butter sauce or drizzle it over your pizza. Drizzling doesn't seem to work as it clashes with the flavours but the crust dip thing works fine for me.

Surprisingly, the pizza is actually very good stuff (definitely beats yucky Pizza Hut hands down!) and tasty. Not as fantastic compared to Italian made pizzas but definitely one of the better fast food pizzas I have eaten. We also ordered a pasta dish (they have pastas, baked pastas and even baked rice dishes) - the Beef Balls Bolognaise. The sauce tasted quite good - no sour tomato taste and filled with lots of minced meat and diced carrots. Meatballs was also tender and not dried out. Only bummer was the pasta was way over cooked and too soft. Guess someone got overzealous in boiling the pasta away! 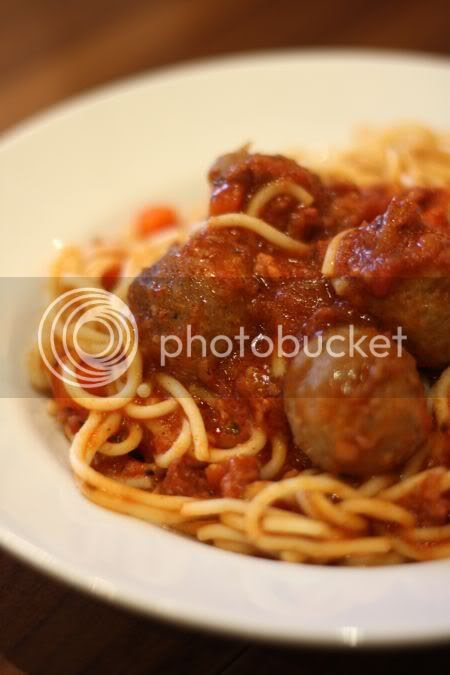 Overall, dining here was pretty good for a fast food joint. We enjoyed the little extra and different touches and won't mind returning (my fav are those peppers!). However, since it is only one outlet, I wonder whether the standard & quality will be affected after more outlets open. Guess we will have to see. If you are in the neighbourhood, do drop by for a quick slice of pizza. On another note, remember those rumours about Berjaya getting the Krispy Kreme franchise, seems it is confirmed per what I read in their website. Expect to see glazed doughnuts (estimated to be 20 outlets to open) in the Klang Valley soon.....

(Halal. Open daily from 10am to 10pm. Can't miss it from the entrance, as it is in the front part of the mall. Also does delivery. For more information, see their local website.)

Very good. Close to the real thing from a good Italian restaurant oven.

cant wait for krispy kremes..yeah apparently their franchise licence requires that kinda amount of stalls to open within 1 year..

so it would be good..no long queues i hope!

haven't tried this place... but so far my fav is still Pizza Uno with its Napoli pizza (anchovies)... otherwise it'll be Domino's when I'm feeling too lazy to go out.. lol!!!

Love the pizza too, but didn't like the fact that they will charge you RM1 for any additional sauce, be it the melted butter or the peppers..

I wasn't impressed when I saw the menu too. But now that you mentioned it's better than pizza hut, I will give it a go the next time I'm there!

the nomad Gourmand - totally hands down. Pizza Hut is getting from bad to worst!

worldwindows - will add you and ciki, didn't know you blogged abt it recently also.

Joe - well, we now know Puchong wil have one...but imagine how empty it will be, as the Klang Valley can only take that much sugary treats?

Leo - I haven't dined at Uno Pizza for ages, sounds good too.

Amanda - guess that is how they make monies? But I think one small dipping sauce is enuf for me, or else it will be very guilty.

Bangsar-babe - do try it, it definitely gives fast food pizza a new image as the pizza is really good stuff.

I wanna sink my teeth into those beef balls... AT penang, we only have Pizza Huts and domino... Most is Elmondo and US pizza.

Waaa I didn't know they had Papa Johns here in Msia! I've been living under a shell it seems! I had some in the States eons ago. Thanks for this!

any papa john's in Penang? Just can't wait. By the way,I'm a foodie too :)
Finding Good Food in Penang

gosh..me & my fren can finish one large pepperoni alone!!!!

wondering if they refill them. i ordered a plate of those cheese sticks, and halfway through, the dipping sauce was finished. hmmm.

ciki - Hahaha, next time must call you when we go?

Allie - I guess it will come soon?

millipedemom - not much publicity, I guess they are doing a wait and see policy before they go for the full attack.

hi el the man, I guess Berjaya has yet to launch their Msian expansion yet. Wait a while, am sure it will come. They seem to be focusing on expanding Wendy's now.

j2kfm - no free refills here, seems you have to pay so better use every precious drop of that garlic butter sauce!

Yummy.. is it better than Yellow Cab Pizza?