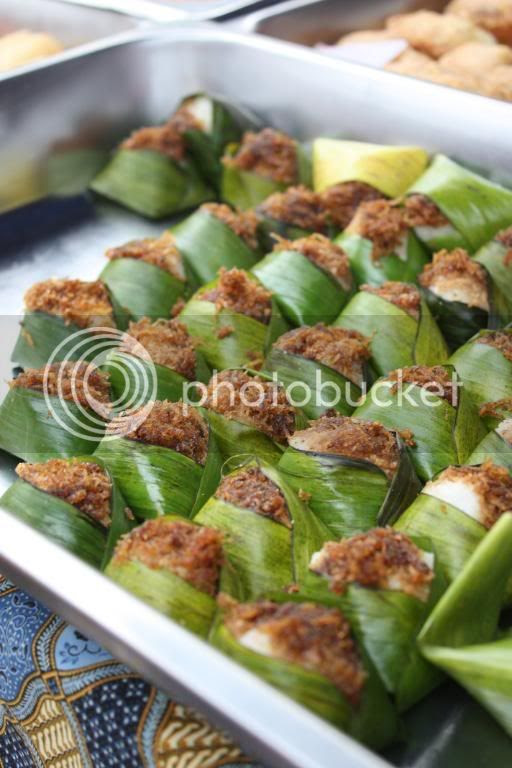 Apologies on not posting for a week - been very busy running around getting paperwork done. I finally had time to relax during the weekend and catch a Ramadan Bazaar yesterday! Initially I wanted to go to Taman Tun Dr Ismail's bazaar, since it was on the way back from 1 Utama. I suddenly remembered it would be a disaster if I went there, since the bazaar coincides with the usual Sunday night market. Luckily we didn't go as I saw loads of cars. Next was Bangsar, since we went grocery shopping at Village Grocer but we decided to give it a miss since we covered that. 
I wanted to go and try the bazaar at Pantai but Splashie Boy insisted on visiting the one at SS18, Subang Jaya. Am very glad we did pop here, as I had the most fun here. The bazaar here definitely ranks as one of the most unusual bazaars in town. 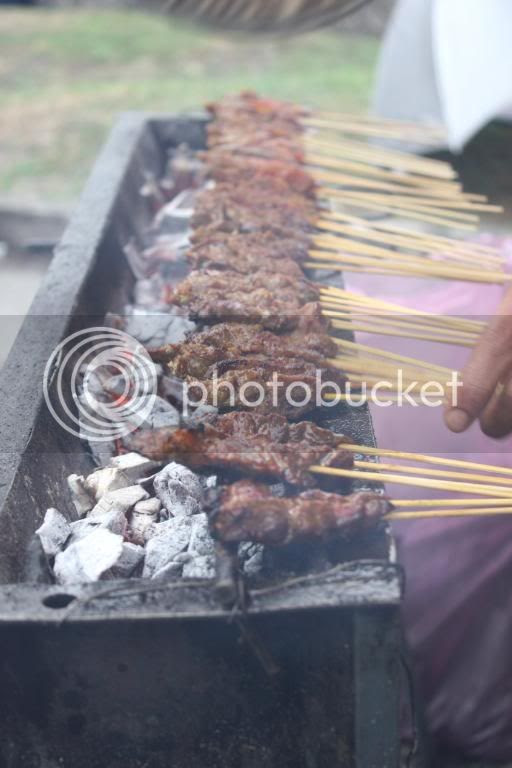 beef satay anyone...?
What is so unusual about this place? It still has the usual satay fellas - one doing an all beef version and another stall selling chicken. Both looked irrestible, hence I snapped both their pictures. Notice how white the charcoal is, indicating a very hot fire. 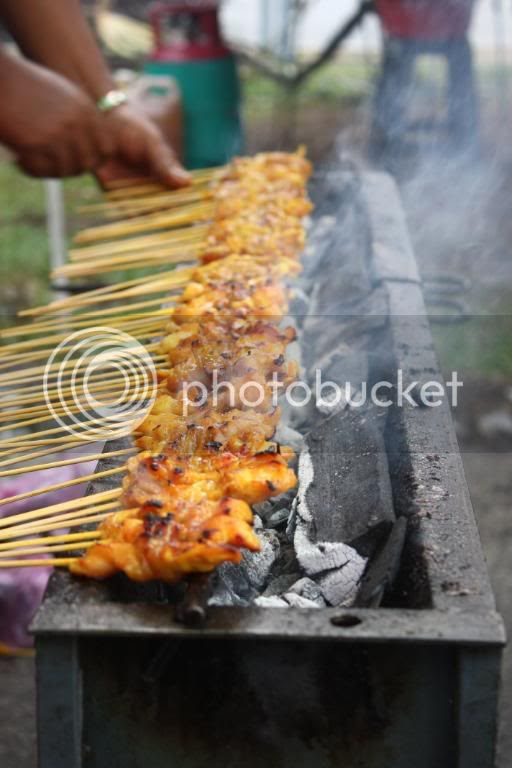 or you prefer chicken instead?

Fire definitely caught my eye at this bazaar. First, it was a fella frying kuey teow in a wok. Flames licked the wok from the side, and they seem to dance higher whenever he threw in his ingredients. Not sure if it tasted good, but he got good patronage from his customers who didn't mind waiting for their noodles. 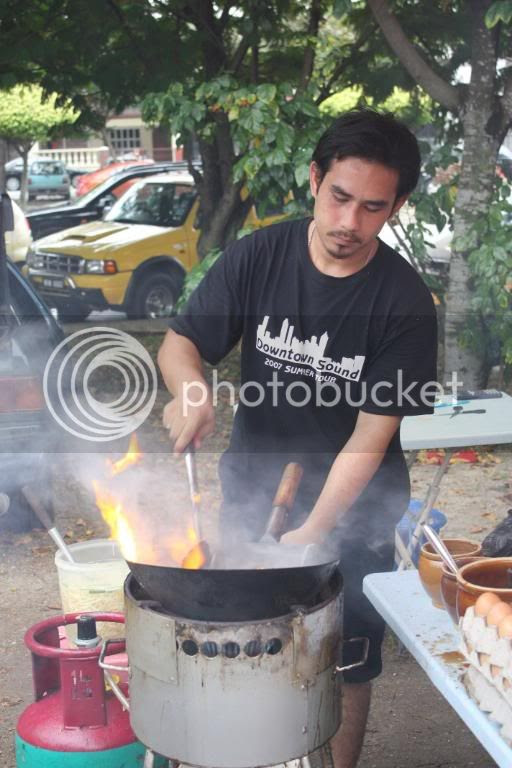 how high you want the flame ah??

Next was this enterprising chap who called me over to his stall and asked me to check out the stall next to him. He told me, there was live fish inside the fish curry - a big fat white lie of course, but it did catch my attention. I liked his grill - using a gas version which had tiny flames dotting the length of a pipe. Cleaner than charcoal but I guess the taste will be different. According to him, he adapted the gas burner to suit his grilling of pulut panggang and satar. 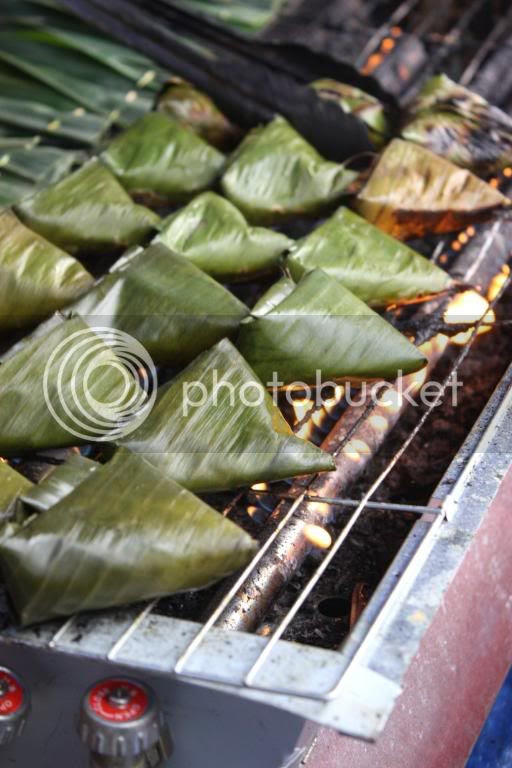 I did see another stall using this type of grill, but it was an interesting idea. 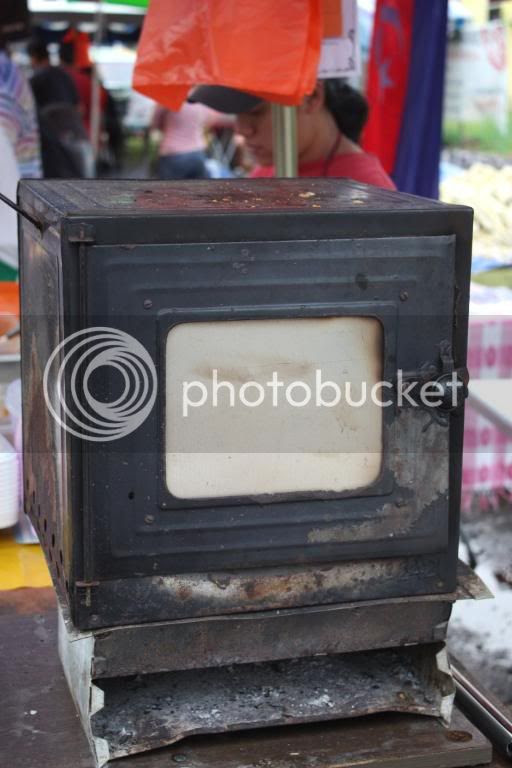 One stall amazed me...they were using this old Butterfly brand oven with a charcoal grill. Per Splashie Boy, these ovens are antiques and usually found in antique shops. This fella was putting the oven to good use - roasting potatoes inside it. 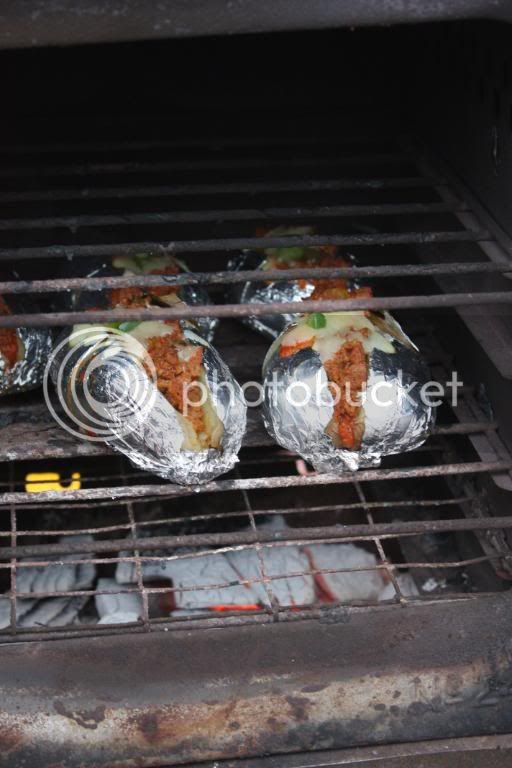 They looked delish - would have gotten some for dinner but I had plans to roast a leg of lamb. There's minced chicken and minced beef toppings with cheese. 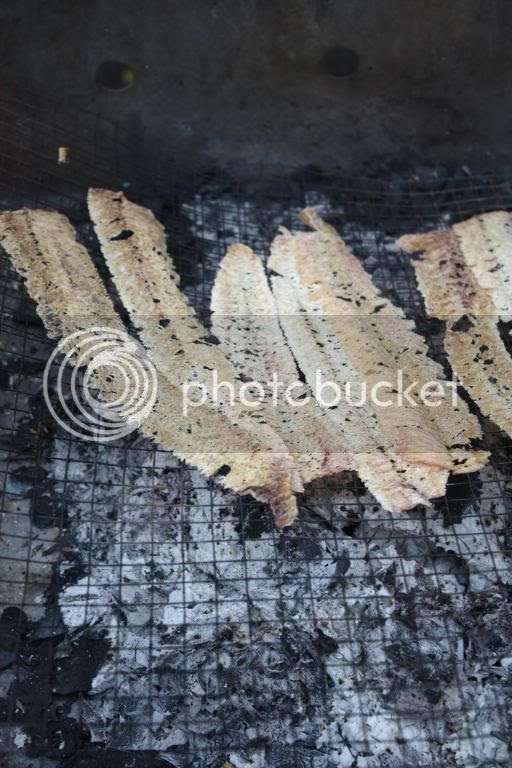 One of the best things of visiting these bazaars - they have the regular stalls you know you have to try every year. We spied the sotong bakar fella around - very aromatic and a smell to tempt you when the sotong pieces are on the hot charcoal fire. 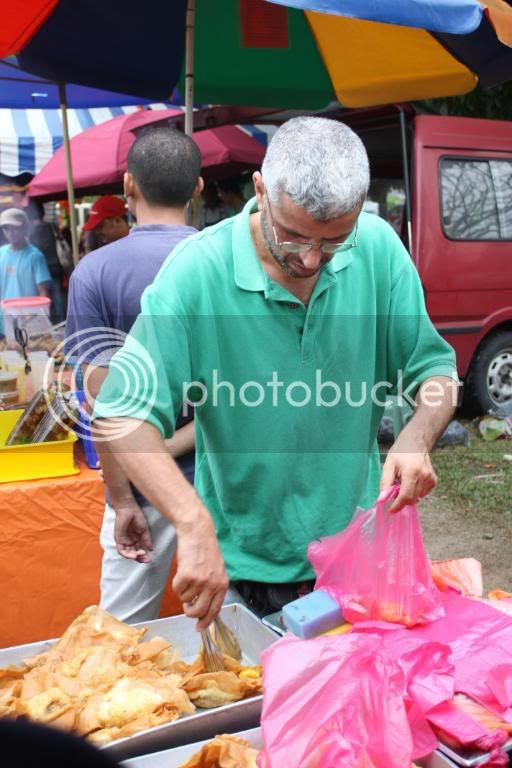 he's back - the Tunisian fella

Last year I thought, the Tunisian stall is no longer doing business, hence I was so happy to see the fella manning his stall this year. 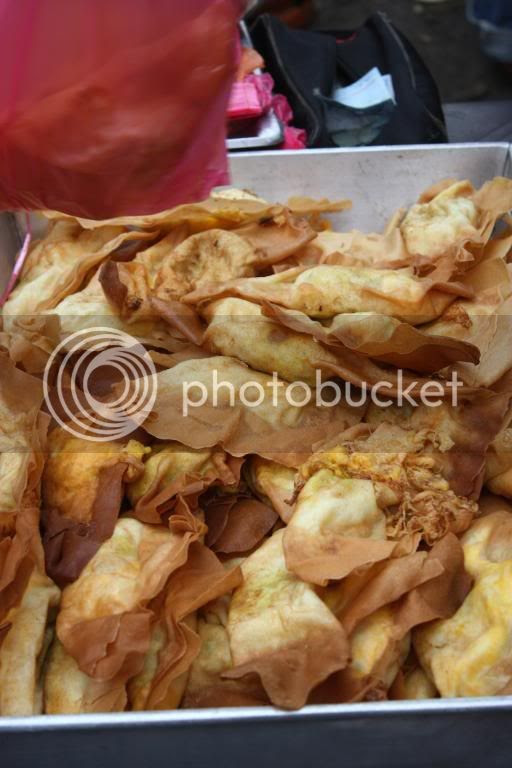 with his briq - stuffed with an egg

The briq tasted just as good - stuffed with chicken and an egg. Worth queueing up for the delish snack. You guys should drop by and try it. 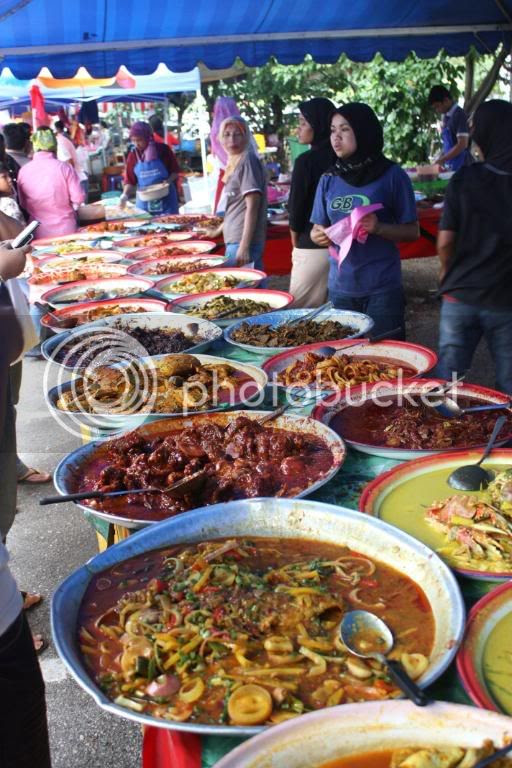 Another regular here - the lauk stall. The tables are groaning with the huge metal platters of food. Everything looks so delish, one often have trouble choosing the dish you want. 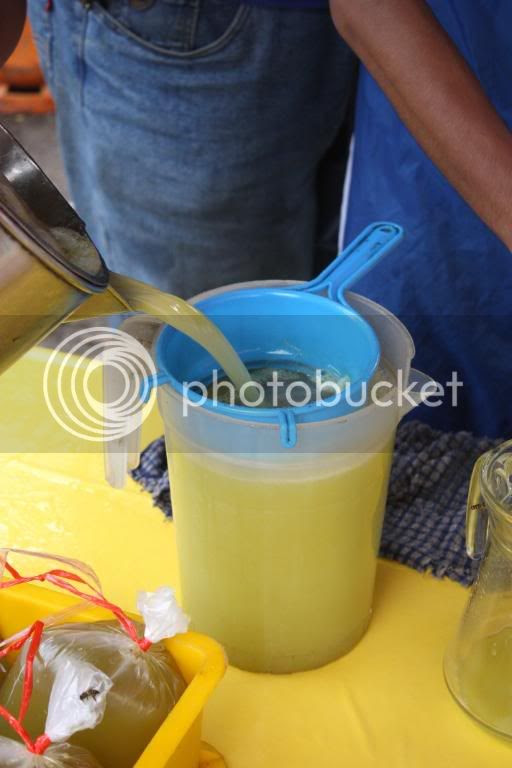 This bazaar seems to have the most stalls selling sugar cane juice. If you prefer other naturally sweet drinks - they also have fresh coconut juice. Everyone seems to prefer it to the colourful drinks made from cordials. 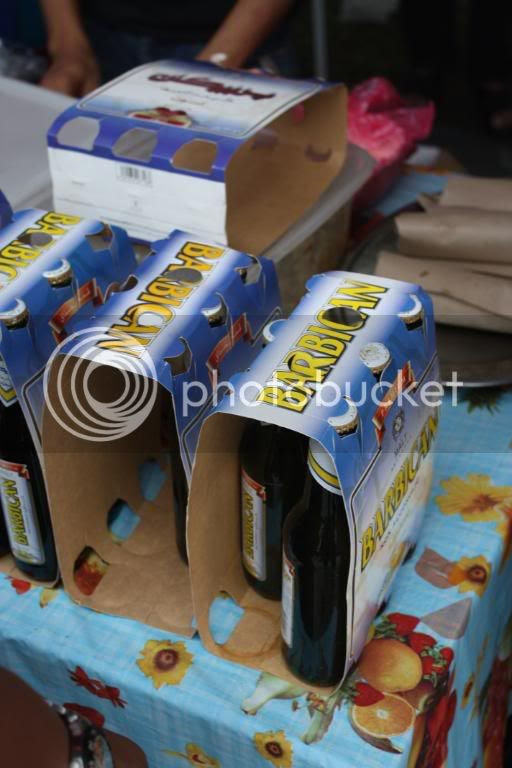 And if you love going for the unusual, try this non-alcoholic malt drink from Dubai. These Arabic looking fellas were doing brisk business selling these bottles. We bought 2 to try - am drinking the lemon flavoured one now. Tastes quite nice but of course, no alcoholic taste at all. Kinda like drinking shandy. 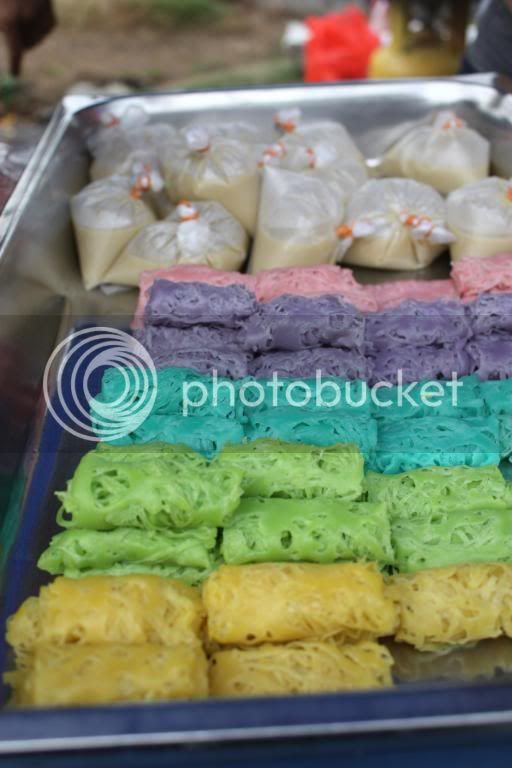 This bazaar has unusual stuff - like these colourful roti jala. I only snapped a picture but looking at the gravy at the back of the roti jala, I reckon this could be the durian version. Looks nice and soft - the type I prefer. I liked this one - the roti mat salai. Very similar to the Chinese version found in pasar malam, this one is halal, as beef is used and grilled. Looks simply delish. 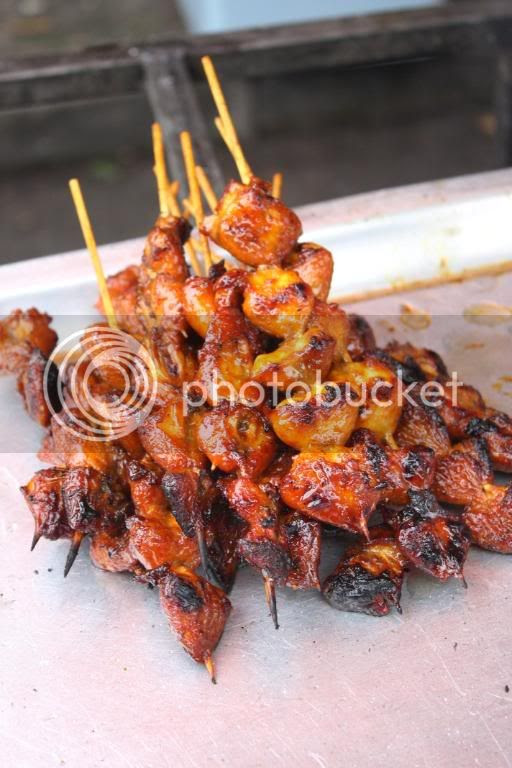 do you dare to eat chicken butts... 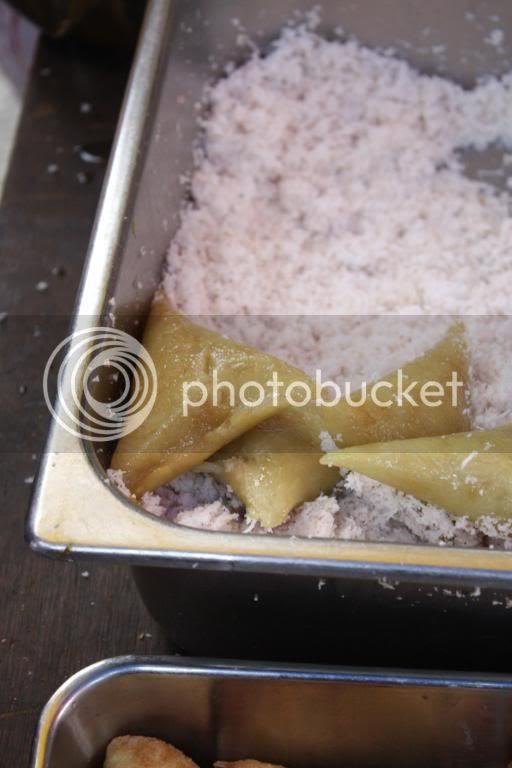 One stall owner, couldn't cope with the attention of his customers. Everyone seems to crowd around this particular fella and he sells the unusual pulut (glutinous rice) steamed in banana leaves and dipped in fresh grated coconut. The kuih is served with gula melaka syrup for flavour. 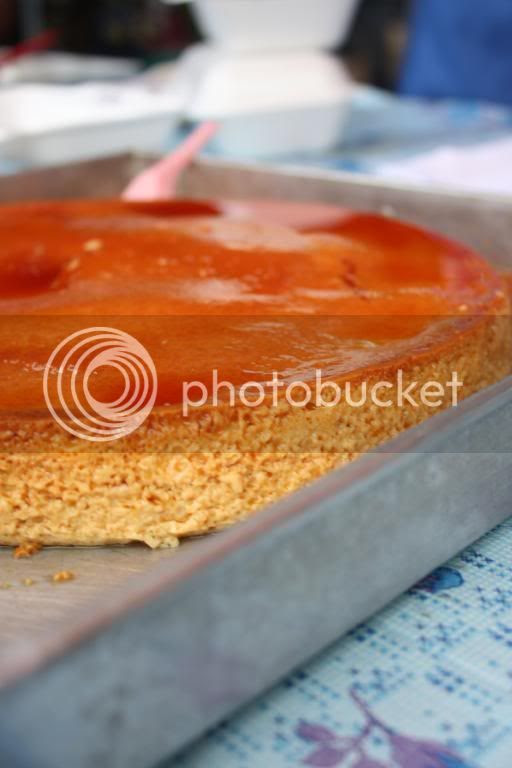 a must - smooth creme caramel

For both of us, a must is the creme caramel. A lot of stalls sell these big versions, which they slice them up. This particular stall run by an Indian fella sells very delish creme caramel - smooth and not overly sweet. 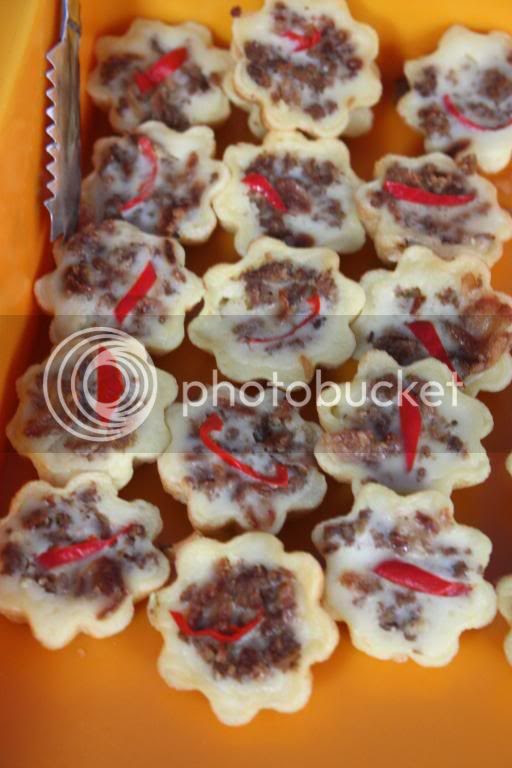 pretty kuih cara in a row

Hope you like the pictures - I decided to upload more so I can make up for the lack of posts last week. For more information on the bazaar, click on the 2006 entry.

Your photos from the bazaar are brilliant. Really enjoyed looking and reading your post.

Good job Boo and congrats as your ramadan bazaar posts were featured in Metro yesterday. Yet to visit any bazaar this year, not our luck as each time i wanna go, sure pouring like mad.

thanks for sharing boo. and the pics looks lovely! saw your ramadan posts featured in The Star over the weekend and everything looking amazing :)

groan, i am so hungry now, looking at your pics... and there's nothing to eat around my office. (for breakfast).
i'll gladly consider some minor crime to get my hands on that pulut inti or CKT.

WELL DONE on the national paper feature :-) Great photos, you deserve it!!

hi hi boo.. yup.saw ur write ups in Metro!
Though the articles "flow" would be harder to understd if the readers are not followers of your blog, the pictures sure makes it self explanatory..;o)
and SS18 is where i'll be in this Sat/Sun!

food in these bazaars doesn't seems differ much from each other. Planning to introduce some really outstanding one?

you are the Ramadan Queen! I missed your shots, i did:D

I love the colorful pictures; not to mention the unique and wonderful apam kukus (so unique, it must be soft!), the kuih muih....awww, such bliss to be a Malaysian, ain't it:)

wah .... so comprehensive one! haha... ppl wont stare at you snapping them up close? :)
good job!

Ramadan definitely makes me missed home alot more. We could use some sugar cane juice right about now too.. chloe is sick. would do her good eh.
The color roti jala is to die for.. :)

boo is definitely the Queen of Pasar Ramadans :) Thanks for all the great photos and reviews.

I love the Mee Hoon Goreng sold by the auntie from Johor (she's also selling makaroni goreng and other johor stuff), and the nasi kerabu with preserved (whole) garlic bulbs.

Wah...love the pics. Colourful roti jalas and lots of new stuff I've not seen before and ending the post with my favourite kuih cara!

RUN WITH THE WAVE said...

Hey there! Check out my website at www.runwiththewave.com Come and experience the waves of Penang! Join us for a BBQ buffet at the beach with watersports activities included!

All the pictures were fantastic!

This bazaar is just a 7 minutes walk from my old home. Rindu sangat2. I remembered on my last Ramadan back home in 2005 my my daily meal from there was roti bom (my kiddies fav), either nasi dagang or nasi ulam or soto, air kelapa muda or mata kucing. Since my hb was in Australia at that time, I managed to buy some sotong bakar. No one will complaint of the sweet smelling smell....

Wandernut said...
This comment has been removed by the author.
3:41 PM

The Tunisian guy's name is Adnan. He used to run a restaurant named Cascabel in SS14 right across the street from the bazaar. He sold the biz and does catering now. A very nice chap. His lasagna was so good. So sad the shop not there anymore.

The colourful roti jala is SCARY.

Just discovered this blog & I absolutely love the food pics here. Keep up the great job. Three thumbs up (Ehhh can ah?)

Hey, the satay man looks handsomer than all the Malay actors put together. *drool*

Incidentally, I just put up a blog post on Kuih Cara which I learnt how to make from a friend. (Sorry lah - plug!) Did you try it?

Sorry. I meant the guy below the satay pic (the one with the steaming kuali). *slaps forehead* (apalah saya...) ^_^

Just for your info...The butterfly brand oven is not an antique it is still selling in Chow Kit... I am still using one...

ur featured in the metro?
by the way ur photos are briliant!!! Im missing home so much now as i always go to ss18 Ramadhan bazaar during these time..
awwwwww. i miss malaysian food!!!!!!!

That is amazing!! Boo-u make all the bazaars look fantastic!

My gosh colorful roti jala???
well Ramadhan is towards the end, gonna miss the variety foods,haha!

Always enjoyed your ramadan posts. Its a riot of food! Thanks.

Question...
What time bazaar close?
Do u think I ll be able to make it after work today? Its last day... Shame to tell ... mel never been to ramadan bazaar b4 :(

hi there. being a resident of SS18 who have been away the past few yrs, reading your post on the bazaar 'partially' satiated my ramadhan cravings! . good to know the lauk stall is still ard.. & the tunisian man's briq too! :D

!! The Tunisian guy's name is Adnan. I'd been missing him ever since he closed his restaurant cascabel in subang. Do you know if he has another restaurant around now?

Your photos of ramadhan bazaar are really great!!