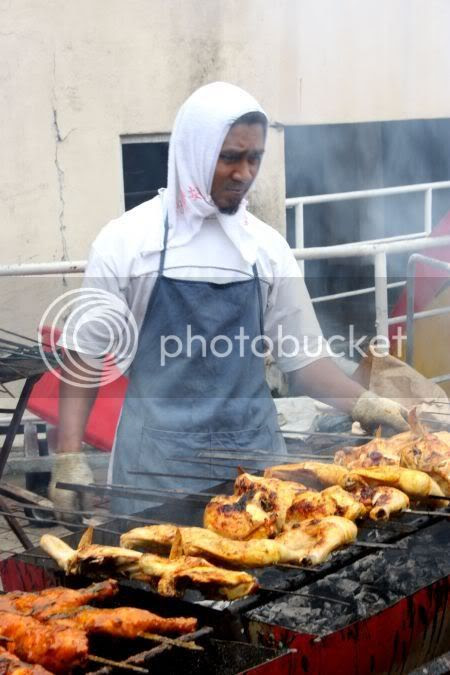 keeping cool in the heat of the moment

This year, we don't seem to be adventurous - sticking to the old places like this one in Bangsar purely because we went grocery shopping at Village Grocer. We were kinda lucky, as we caught the bazaar in between the constant rain fall during that day. Honestly, we're beginning to resemble the dull and dreary British weather. 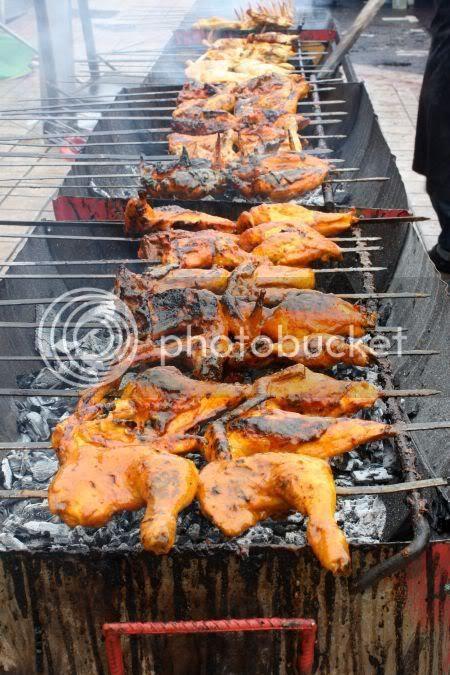 It's never hard to spot a bazaar anywhere, just sniff the air and follow the smoke plumes. Usually it is the ayam percik guys who rustle up the most smoke with the ikan bakar fellas running next in line. It's definitely a very "hot" business, and sometimes, you will do anything to keep cool - even though you drape yourself with Good Morning towels. 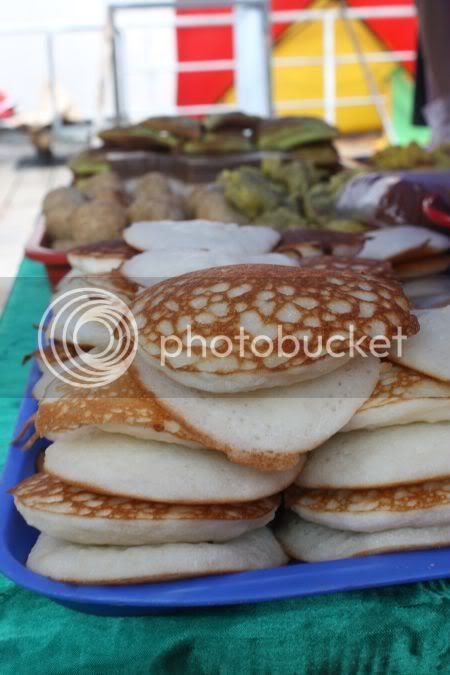 Kuih stalls are the first thing, people make a beeline for and usually the first to finish. I spied the bright electric blue kuih dadar here again - didn't snap a picture since I took it one year and this unusual coconut milk rich apam. The usual suspects were also here - onde onde, kuih seri ayu, doughnuts and etc. 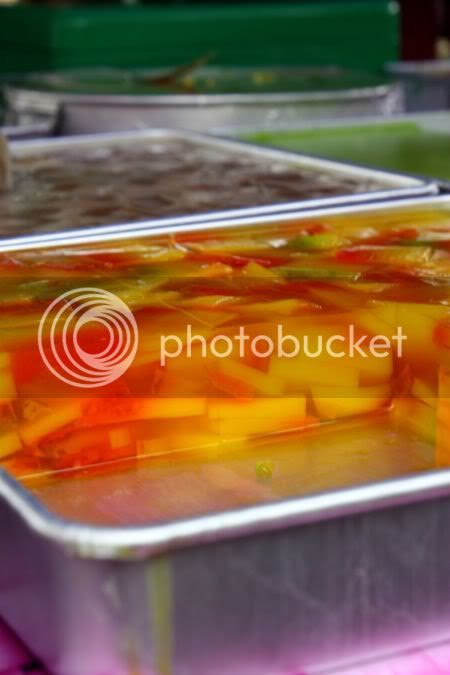 orange red agar-agar to tempt you

While some love those kuih, I absolutely love cool agar-agars. Set out in metal trays with a rainbow of colours, they also come in various flavours like Sarsi, banana and etc. I love the details some stall owners do - coordinating the various colours, like this orange and reddish one. 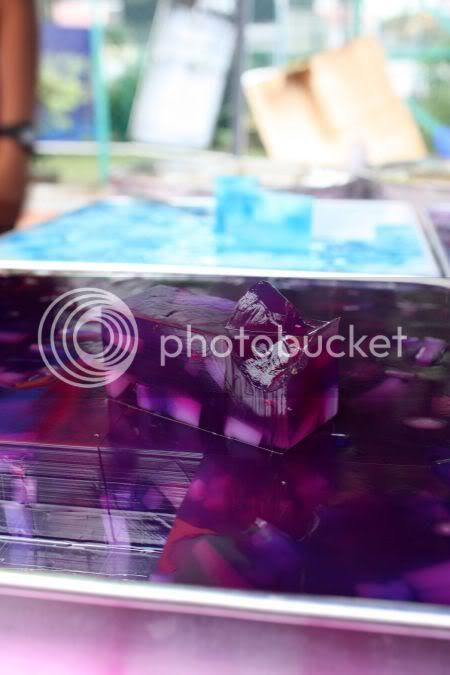 all in various flavours...even an icy blue one

Or, like this version in deep purple - must be a blackcurrant version or the pale blue version. 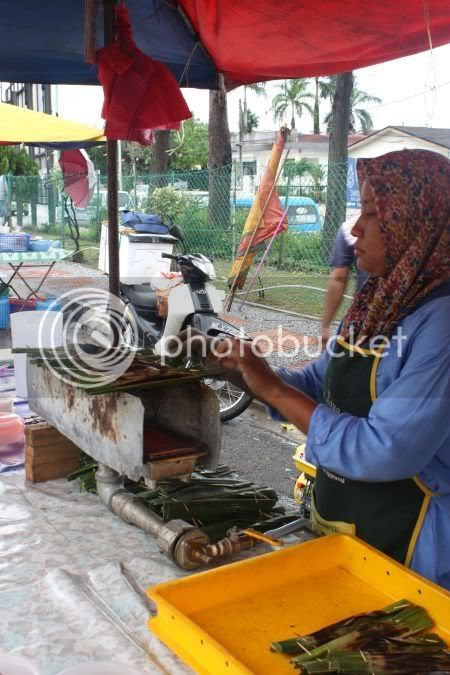 While most of the stalls were selling kinda ho-hum items - this particular one had an unsual contraption to barbeque the wrapped otak-otak. I reckon it is home made and it looks extremely sturdy. Saw one fella making satay on a make-shift camp stool....looked really flimsy and about to collapse, and kinda weird since it was so low. 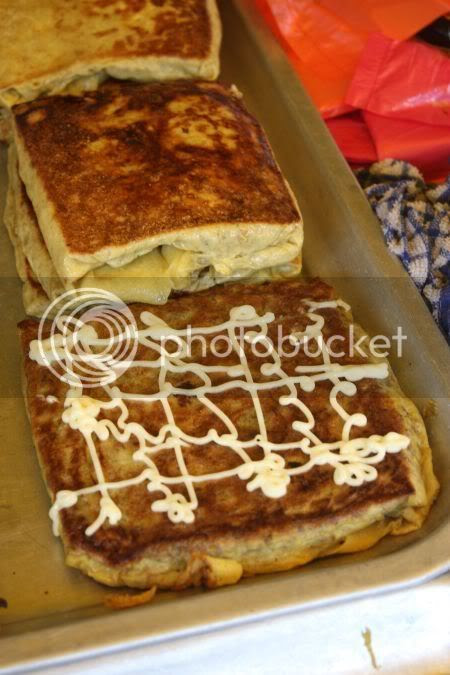 Murtabak Din seems to be spreading their wings here, with a stall. They claim to be the king of murtabaks. I wonder if it tastes as nice??? 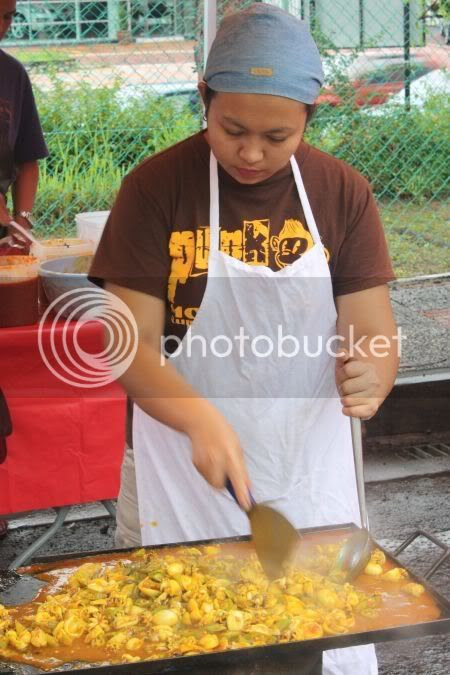 they're back - the Portugese baked fish and seafood people

The old regulars were hanging around - the people who fry up the seafood and foil packets of fish or seafood, Portugese style. Even the auntie who sells kuih jongkong was there. Two versions of this fried prawns - the cucur udang version pictured above and also another version at the Rojak Singapura stall. That one was plainer, without any chopped chives. 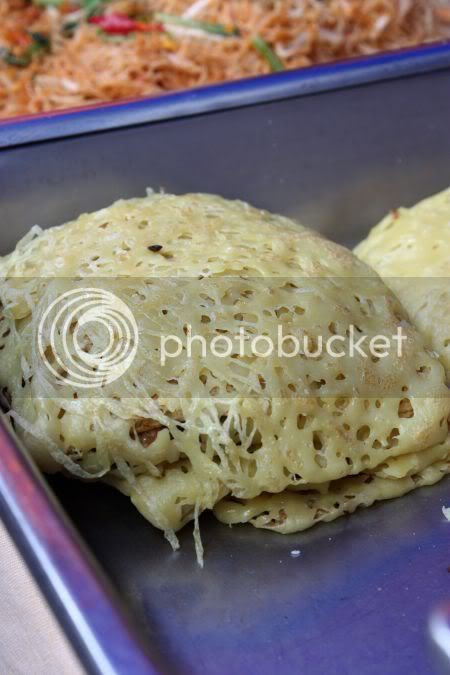 this year, the roti jala fusion item has a new name...."rojabak"

Bangsar is well known for one item, they seem to have come up with - the roti jala fused with murtabak. Seems it is now known as rojabak - ro for roti, ja for jala and bak from murtabak. 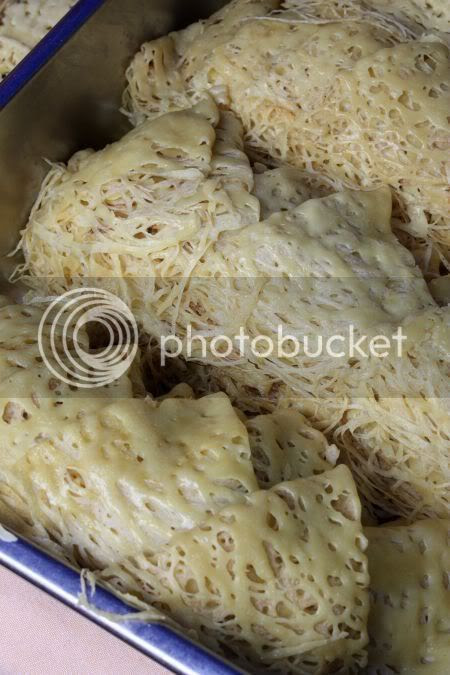 if that is too weird for you, go for the original roti jala

The original people who came up with this idea is Sarawak Cafe. The nice man at the stall even showed me the step-by-step to make this unusual item - first make a bigger roti jala, then dab planta margarine on top and flip. A ready made filling - egg with minced meat and vegetables, would have been fried ahead. Add to the roti jala and then fold and you get the new, "rojabak". For detailed pictures, refer to my flickr set. Tastewise, not bad but needs some curry or chili sauce to go with it. If you prefer, the original roti jala is also available - not the extra crisp version but the softer one, that I like. For the 2007 and previous years, click on this link.

Hmm, u r really into visiting Pasar Ramadhan eh? Come to the one in SS18 Subang...

rainning almost everyday...I went to pasar Ramadhan in Shah Alam and Bandar Baru Selayang in rain...~
Anybody know the taste for the king murtabak??

v cool, atmospheric blog - i can almost feel the vibes and smell the satay:D nice closeup shots of the desserts as well.. making me drool...

ayam percik is my all time favourite.....

Wow fusion food. But for me during this fasting month, I teringin makan traditional and simple food, like the otak2, bubur som2 or even the plain red agar2. I think I will have to make it soon. :(

oh ROJABAK? hhahaha ... wonder when they'll come up with PIZJABAK ...

the cucur udang has one big prawn in each of them huh? yummy stuff. how to refrain from buying everything eh?

now i am keen to try this new creation...

but i noticed that everytime i visit ramadhan bazaars, i go for kelantanese fare.

Love your Ramadhan shots, keep it up :-)

I love riti jala, don't mind to try the rojabak too :)

those cucur udang look so delish and crispy!

I always tend to over indulge when visitng the bazaars...but never stopped me from going back!

so fast... Ramadhan again...
i forgot to remind myself for not visiting your blog when i have empty stomach... ~o*

skyjuice7 - I think they just trying to be innovative.

sc - not bad but not brilliant either.

mochasourcream - maybe, I'll do that during the weekend? The last time I went, I bumped into fulltimemum there.

bizkutraya - I wanted to get some the other day but opted for rojabak, it looks quite good.

cumi & ciki - yeah, all the smoke and smells from the bazaar. Usually after that one will smell like ayam percik!

fbb - near your place!

worldwindows - hahaha, I like how you describe the atmosphere.

jackson - yeah, and the ayam percik at Pick & Brew is pretty good too!

flower - simple food is always good, as you can't go wrong there.

j2kfm - LOL, probably next Ramadan season you will see that pizza toppings on roti jala! A bit difficult to eat though.

I really love this blog. If I were to be in KL at this time, this would be my guide. They don't have, bazaar ramadhan in melbourne. I would give my right kidney for that ayam percik.

Keep up the good work.

Excellent stuff boo_licious! Well, you do a fabulous job with your 'not so canggih camera'. Yup, I hear rumblings from my tummy... off to the Bazaar!