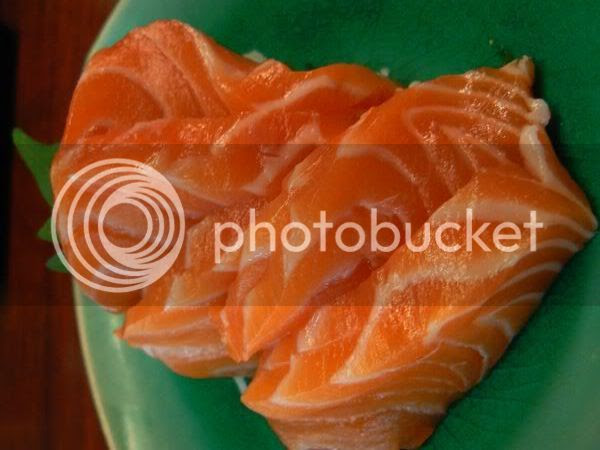 Although Sushi Groove sounds like it's from an Austin Powers movie with all the groovy references, it is a far cry from it. Decked out in an interior which is quite dark and gloomy with a few lights and lots of green everywhere, it looks more like a bar rather than a restaurant serving Japanese food. Strangely enough it's not even Japanese in origin but Indonesia. When you walk through the door, instead of the usual Japanese greeting of hello, here they herald your arrival with the word - "Groovy" which signals to all the wait staff to greet you hello. Depending on the availability of tables, you either get to sit at the individual tables at the side or share the huge communal bench tables with others.
When this place first opened, it was packed with people all eager to check out a new place in the mall which also offered a 20% discount. We ate here twice, once when it first opened and it was obvious how they struggled. Management was running around helping out with orders hence the service was brisk and friendly but the kitchen was slow in churning out the food. Then for a while they closed for business and only opened at 5pm daily citing renovation works needed. Now they have fully opened but with a limited soft opening menu. According to their wait staff, their full menu will only be available once they have their grand opening which is after July 1st. 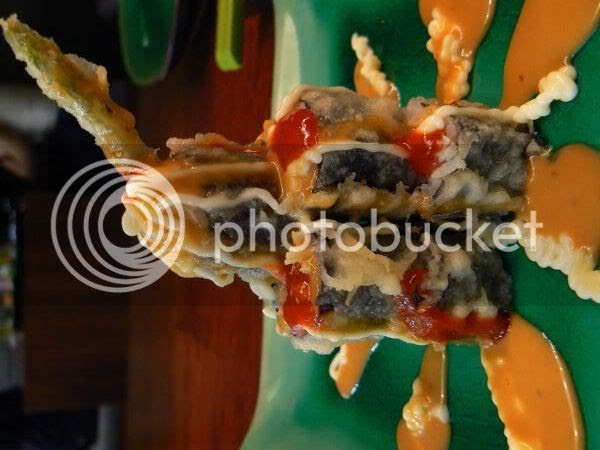 The menu consists of sushi with quite an emphasis on various types of makis, small plates which are appetizers and salads, various types of rice and noodles and dessert. For the more conventional eater, there's nigiri Sushi or sashimi slices. I ordered the Salmon Sashimi (RM13.90) which came with five thick slices. Although it looked pretty good, I realised after eating my first slice of salmon sashimi that it was a bit too chilly. After a while, I realised that they had obviously pre-cut the sashimi slices and placed them on a plate in the fridge since the plate holding it was cold. This was to cut down the wait time in slicing the sashimi in the kitchen.
Then it was the Krakutua Roll (RM9.90) which was stacked up to resemble a volcano with it's lava flowing down in the form of a sauce. Filled with gindara and asparagus, the rolls were deep fried before being slathered with the special mayo sauce. Not too healthy but quite tasty. The red sauce was chili which added a kick to the roll. 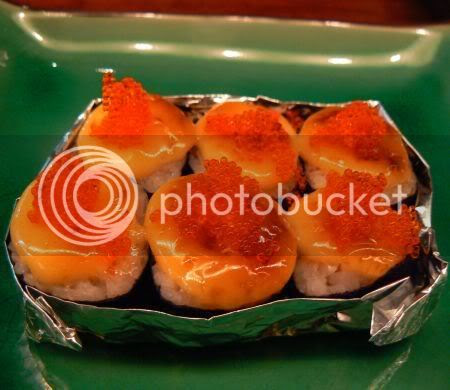 Their spicy mayo sauce gets used in quite a few of their sushi dishes like this one, the Mayonnaise Dream Roll (RM9.90). Filled with crabmeat, salmon and carrots, it's topped with the mayo sauce with a bit of ebiko and baked in the oven for a short while. I quite liked this one as it was pretty tasty. 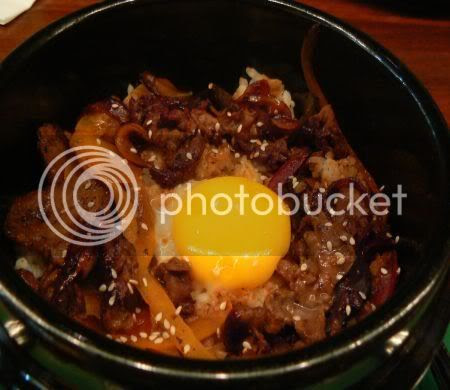 For something more substantial, go for their rice and noodles dishes. Splashie Boy had their Yakiniku Bibimbab which was served with slices of beef, an egg and rice on a hot stone bowl. He said it wasn't too fantastic and he preferred the one served at Bonjuk. 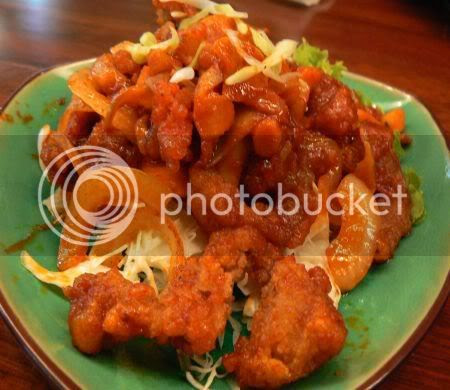 I wanted to try the Yakuza Fried Beef but I must admit it didn't look too appetising also when it reached our table. The fried batter was soggy and the sauce they tossed it in was quite sweet and spicy. Not one of their better dishes. I also had their Crispy Chicken Skin Salad which I didn't snap a picture as it was just a few pieces of lettuce, thin pieces of crispy chicken skin and a generous topping of bonito flakes. Although everything was super crispy, I didn't really like the soy sauce dressing which was slightly too salty.
Overall, I thought the food was not bad but definitely not pure Japanese but more fusion. It's a lot of deep fried items and usage of mayo sauce which is not too great for one's waistline. The soft opening menu is kinda dismal with their choices especially after you have seen the full menu which is so much better. Hopefully they get over their problems like service with the limited menu choices. The only thing I kinda didn't like was sharing a table with everyone else as things got quite cramped. The only good thing about it was I got to see what other people ordered from the menu.
Sushi Groove
Lot G342 and 343
1 Utama Shopping Centre (New Wing)
Petaling Jaya
Tel No: 03- 7725 3733
(Pork Free. Located on the Ground Floor Oval of the new section of the mall.)
*Disclaimer: The opinions expressed here is entirely based on my personal tastebuds and may vary for others. The reviewer also declares that she has not received any monetary or non-monetary compensation from the restaurant for writing this review.

Tagged with: Japanese Fusion Food + Sushi Groove + 1 Utama
Other reviews:
Posted by boo_licious at 12:55 AM

Your pictures sure make this sushi look good! And I don't even eat sushi! lol :))

the problem with all this sushi bars is the lack of quality in freshness and the fact remains the rice are churned out in balls by a machine and not by a pair of hands..the price is still on the steep side and i would rather pay a slight more to seat in a proper Japanese sushi bar and have "proper" sushi..

all those deep fried and mayo sauce is no good for our waistlines indeed..

It sounds like a Japanese Fast Food joint to me. But your picture of the food definately looks yummy.

I was there, my salmon shashimi was ok. But was not impressed with the long table sitting as can be very tight.... I felt like I am lost off breath.

Looks like fast food prices. Okla...the pics look good. Will try once the full menu is up.

Agree. Maybe they are still struggling and deep fried food are easier to prepare.

went on their 1st week of opening. hated the "groovy" intro as I was sitting near the entrance, it was very irritating after a while. didnt like the fact that there's chilli sauce on most of the makis we ordered. food we ordered was average, but the fried mushrooms was bad! service was ok though when i was there..

Now it makes me wonder whether I shall go visit this place. Seems like the food isn't that fantastic. I rather pay slightly more for better Japanese food.

oh yeah you know about the blog i was talking about..its semi launched

they got good presentation on their dish? or ur photography skills is great :)~ i think both ...seems tasty n drooling

been reading quite a few reviews about this place. Looks lovely and tacky! Mmm that mayo dream roll looks so heavenly. I get mayo cravings occasionally. Will remember to eat at this place the next time i have a craving! Must meet you at 1U for lunch/tea next month.

i like that mayo dream roll too...! :D heard from my friend there's one new sushi rest just opened month ago @ sunway pyramid.. wonder if you've tried them?

ann - time to change? The sushi looks the same so it's not my pix taking skills.

joe - hmmm, well I do hear you loud and clear abt paying more but once in a while, these places can be good esp when you're tired after shopping in the mall.

precious pea - yup, this is basically like a kaiten place minus the conveyor belt.

big boys oven - yeah, it can get claustrophobic if you want yr personal space.

lemongrass - worth trying for their fusion makis I think and a change from other Jap places.

xiu long bao - I think they're just struggling because they're new at it. Takes a while for a kitchen and staff to get everything going well.

sc - LOL on the groovy bit. Yup, lots of fattening mayo. The chili sauce I found is only for certain items so it was ok for me even though I don't usually eat chili sauce.

tankiasu - can't as then they're copying Austin Powers.

cutie - suggest if you want to try, do it when full menu comes up. Some items look quite interesting like the non fried items.

tummythoz - it's kinda not Jap food, more fusion though.

poonky - nope, their presentation is pretty good and the green plate does look eyecatching in the pixs.

paprika - makes a change from Oriental Cravings? Once in a while, I also love mayo esp Jap mayo as it's so addictive. Yeah, let's do makan at 1U next mth when you're off yr diet.

meiyen - yeah, that place is not bad. More conventional Japanese.

honeystar - yup, they're creative in their makis and presentation. Some of them they even light them up, it seems. Think that's the firecracker roll.

the pics of the sashimi make me wanna bite into my computer screen. i can almost smell the salmon.

fbb - time to dig out the handy Shang card and get yr fill at Zipangu.

hi masakmasak, i havent been by here is too long, why i dont know since it all looks so delicious with your beautiful pictures that my stomache is now ggrrrowling..... YUM!

Yum~ the texture of the salmon looks nice and delicious!