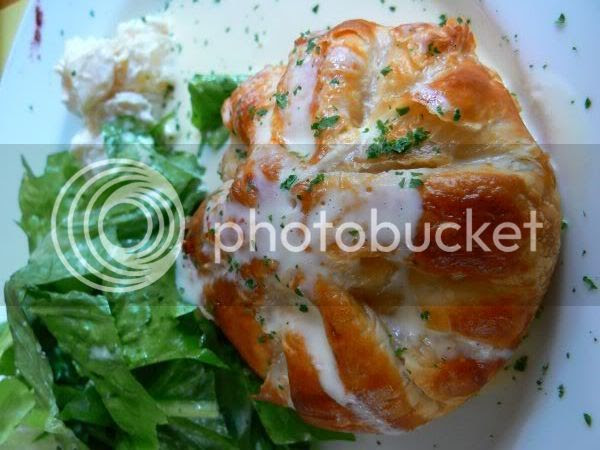 Rather than you think I usually end up eating good food at every place, believe me I sometimes stumble on places which just don't get along with my tastebuds at all. When I first saw Empress Cafe opening its doors to the public, I was excited since they're the old Bayou Cafe from Plaza Mont Kiara. However, when I tried the food there, I was sorely dissapointed with majority of the items ordered. In fact, I was so dissapointed, I actually visited it twice to make sure it just wasn't a fluke during my first visit. Not sure if I ordered duds from the menu but I just wasn't too impressed with the food nor their prices.
I was told that their Chicken Pie (RM18.90++) is famous hence we tried it. It takes a while to cook it as they claim it's made from scratch. The pastry is buttery and baked to a crisp golden colour. Really nice even though I did find stray bits of uncooked pastry within. The filling was nice and creamy which came with chunks of chicken meat. 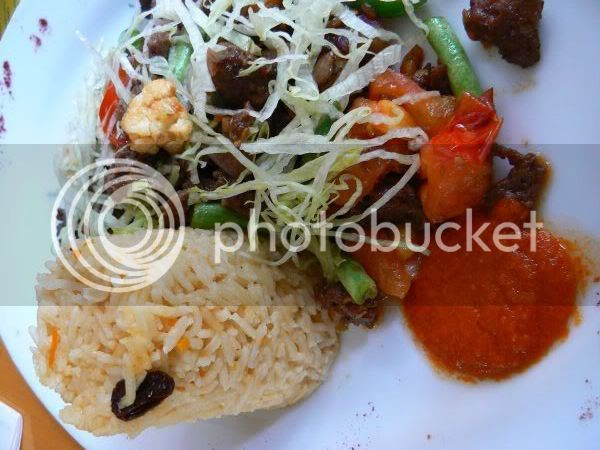 Now, in the old days when they were known as Bayou, they were well known for their Javanese dishes hence we picked this Ambon Beef (RM22++). Served with a mound of rice, the beef is cut in chunks and cooked with an assortment of vegetables. Although it was a pretty good sized portion, they kinda ruined it as the serving was too sweet. Thumbs down for this particular dish. 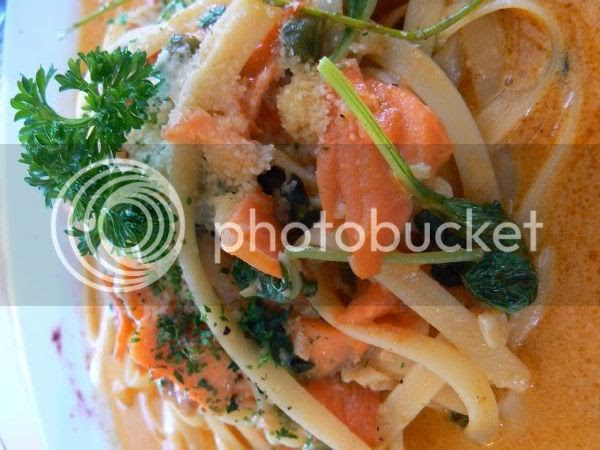 Since they had such an extensive menu filled with pastas, pizzas and asian meals, I decided to give them one last chance. This time round we sampled their pizza and pasta. First we ordered their Fettucine Al Salmon (RM32++) which came with an technicolour orange sauce. Big mistake as instead of a citrusy and tangy sauce which was what I expected, it turned out to be cloyingly sweet instead. 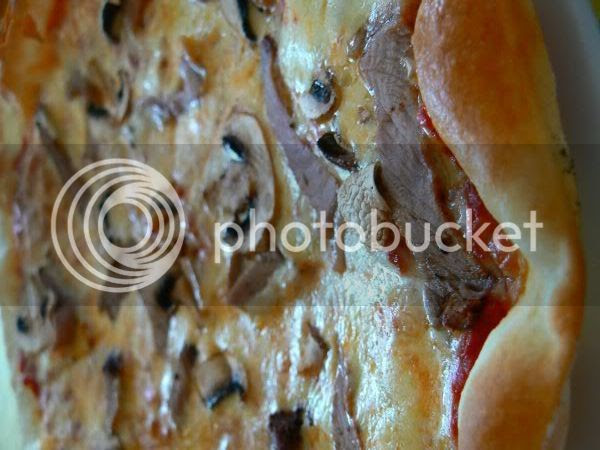 We fared slightly better with their Steak Pizza (RM28++) which came with slices of roast beef, mushrooms and sun dried tomatoes. Although it wasn't sweet tasting like the previous dishes we sampled, this one was kinda tasteless. Now I know why they handed us a small bottle of Tabasco sauce as they knew we would definitely need it to spice up the plain pizza.

I'm not too sure if I dare venture in here for the third time as I felt the food was mediocre only even though the chicken pie was pretty good. Pricewise, it ain't too cheap either. I'm sure there are fans of this cafe out here which will scream bloody murder to me for slandering the food but bear in mind, everyone has different tastebuds. Mine just can't take too much sugar especially in savoury dishes.

(Halal. Open from morning till late at night especially during weekends. At the end of the Street and is next to Nanxiang Mantou Dian.)

Empress Cafe..... I really love their cafe deco and design. The setting looks posh and something unique. I had a glimpse of their kitchen, hmm something I would dream of having.
But.......when I got to see their display chiller.... I got a bit or rather shocked to see what they display. It was really unattractive and unappealing cakes and deserts. Once I saw that, I think twice to go in to dine.

Just my one cent opinion

For me I only like the look of the 2nd dish with rice.

Like to add that u are the most hardworking food blogger around. Every morning I get a new dose of food adventure. ;-) Thanks.

I agree with big boys oven, even during their days in Plaza Mont Kiara, their display chiller wasn't very impressive and got to say, quite empty too. But their Chocolate Banana Cake is fabulous. Moist and Chocolatey...wonder if it still taste the same. So sad to hear they no longer serve good food like they used too. But one thing still as consistent for sure: their price.

hmm i was always tempted to try out this place..now that you mention..the chicken pie does look damn good!..but the rest is abit errr...

boo_licious, may I ask, what is those white slimmy thing on the first picture? Is it what I am thinking it is?

The old Bayou? Did you notice whether do they still have popiahs on their menu? I remember liking them very much last time. :)

Cannot stand "sweetness" in savoury dishes too! Except if its foie gras... lol. Thanks for all your precious info on makan places!

i have yet to try this place... sounds horrible! O_o and price wise, kinda expensive!!!!!!

Just the other day I was wondering where Bayou has located. Thanks for the tip. I remembered its delicious nasi bukhari, mee goreng mamak, mihun goreng and their pricy but yummy choc cake. Did u meet its owner at Empress?

The food is so average but the prices very above average.


I would not patronise this place again unless I have no choice.

U r so kind. 1st time not happy with food, willing to spend again to reconfirm.

That's the proof of a hardcore professional food blogger. First try, tak ngam, try second round to be sure. Impressed I am. ;)

was tempted to try it too based on the impressive deco.

now not too keen, even if the chicken pie looks so good. lol.

I'm with you, can't stand sugar or any sweetener in savoury dishes. Yuck, to me, that is an unfortunate hallmark of *American-style* Asian cooking so I'm so disappointed that someone is doing this back home in Malaysia!

big boys oven - Yup, I love how the decorate the place but their cakes always look like a total mess. Some are pretty good though.

wushu_kid - no problems in brightening up yr day with food.

precious pea - LOL, yes their prices are still so high but now food not so nice. Have eaten their catered food which was very nice though.

diary of kay el - what to do, instead of MSG they add sugar.

meiyen - sad as the place looks so beautiful.

sweettooth - guess you can try and tell me if I picked duds on the menu.

chocolalat - ah, sounds as though you didn't think the food was worth it also.

tummythoz - sometimes could be because I picked the wrong choices.

kenny mah - actually real food reviewers go there 3 times! Sometimes I do that too esp if I'm not sure abt the food.

jasmine - u're rite as I love their decor. Too bad abt the food.

cheesewithaspoon - that's how they avoid MSG in food. Add sugar instead which I hate esp if too excessive.

enormous disappointment. was there as a last resort, yet felt we were better off starving! And yes, rather pricy too.

scenedee - it's kinda sad since they have such a lovely cafe layout. Somemore near Cathay's Cineplex.

ha? so disappointted? I can't recall it well but most of the food i ordered was not the same with you...

jackson - maybe I ordered all the wrong things? Dunno but just not very impressed.

Rare that I read anything negative in your blog. Must've been really disappointing huh? Such a shame when standards drop.

aha... you seldom give such a bad comment. i will still give it a try, but they will be my last resource now at The Curve. :-)

i was at empress yesterday and it sucked big time! The service was horrendous, none of their staff could speak proper english if any and with all the decor, and choice location, their menu is a regular photocopy!!

empress is having a tropical shisha now, do give a try....The Flavor of course al-fakher...juicy and tasty fresh made flavored tobaccos...