Dining Out @ Chinoz on the Park, Suria KLCC, Kuala Lumpur 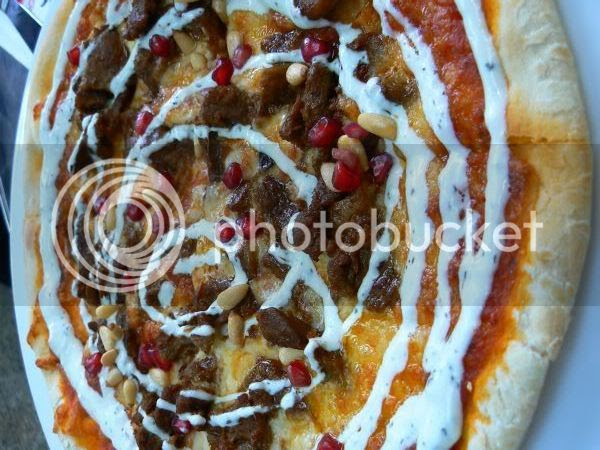 I always get hit with a load of memories when I think of Chinoz since it was one of those places I used to hang out at when they were in Bangsar long long ago. Originally starting out at the shoplot where Sri Nirwarna Maju is now located, it was THE place to dine. I still remember the bread which they served in tiny bamboo steamers. My friend absolutely loved the butter and would always ask for more. Then they shifted up to Jalan Telawi 5 near Finnegans where they occupied two shoplots - upstairs and downstairs. Food was still good and I remember the amazing appetizer buffet spread they had. Upstairs were posh private dining rooms where we had a party once. Not sure what happened but they closed that down and focused on their Suria KLCC outlet. This outlet used to be quite a fun place since it was located at such a strategic place and great for drinks and a quick bite. Now it's all modern and stark - totally unlike the previous Chinoz on the Park which felt warmer and friendlier. 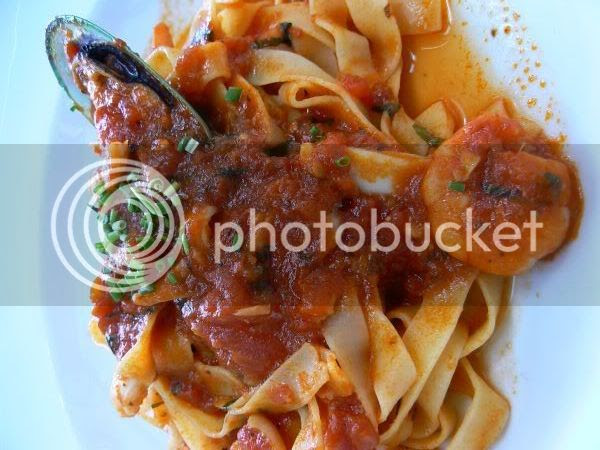 Even the menu has changed and the focus seems to be on their seafood bar with Japanese items like nigiri sushi, makis and sashimi. There's also crudo - the Italian version of sashimi whereby it's served with oils and dressings for instance tuna with hazelnut oil. We weren't in an adventurous mood that day hence we focused on staples like pizza and pasta. There's also tapas (small dishes) which caters for the drinking crowd.
We ordered the Turk (RM32++) pizza and the Fettucine Marinara (RM38++) to share. The pasta was nothing fantastic - just seafood like green lipped mussel, scallop, calamari and prawns mixed with tomato sauce. You can opt to have the seafood with olive oil or even cream sauce if you fancy. The pizza was pretty interesting and tasty. It came topped with slices of curried lamb, sprinkled with pomegranate seeds and pine nuts with a drizzle of yoghurt. Although we liked the pizza versus the pasta, we couldn't help comparing the lamb slices to beef rendang.
No desserts for that day since Splashie Boy had to rush back to work but I did check out the dessert counter which looked so like the one in Singapore's Marmalade Pantry. The counter is quite strange as it's tucked in one small corner far away from the service area. I spied items like Red Velvet Cupcakes and etc which kinda reminded me of the cupcakes Lyrical Lemongrass featured before in her blog. I wonder if they were made by the same person or the restaurant just has a baker who likes the Magnolia Bakery Cookbook.
Prices here are kinda on the higher side but then I guess it's to do with their premium location as the view from outside is great. We sat outside looking at the skyline under billowing fans and it was pretty nice especially with the direct view of the fountain in the KLCC park.
Chinoz on the Park
G47, Ground Floor
Suria KLCC
Kuala Lumpur
Tel No: 03 - 2166 8277
(Halal. Some menu items are cooked in alcohol but it's indicated with a red sign.)
*Disclaimer: The opinions expressed here is entirely based on my personal tastebuds and may vary for others. The reviewer also declares that she has not received any monetary or non-monetary compensation from the restaurant for writing this review.
Tagged with: Suria KLCC + Chinoz
Other reviews:
Posted by boo_licious at 12:45 AM

i often at klcc but chinoz usually not much people from what i see, probably the price too expensive for some ppl like me :P

I remember Chinoz from the "olden days". My friend and I used to hang out here..we had befriended a couple of MPO performers whom we fancied, and they ate here quite often. haha. The food? Okay la. Will have to check out the place again if you say that the dessert selection is interesting.

Oh what a beautiful looking pizza!

Is not the fantastic.
Tried once. Their foods is ok ok only. Now they had changed the menu. Didn't try it out. But i think others restaurant is much better than Chinoz.

I realize KLCC don't have great and nice restaurant.

Wanted to try their food but the price is a bit high. But the pizza do look gorgeous.

Please do not eat their cupcakes from that counter. They look so gorgeous right? My sister bought four different ones to try a few months back and they were terrible! Fake cream, slightly dry and really nothing special. Money down the drain. But, who knows, maybe they have improved since then.

wmw - u can visit when u stay round the corner.

poonky - yes, not many people dine here. Can't blame them as the prices are quite steep.

lemongrass - MPO performers? I think I saw them once at Dong Bei restaurant in Pudu. Maybe u want to check with Riz if his friend supplies cupcakes here?

tankiasu - very nicely decorated. U can mix and match 2 toppings, saw the next table doing just that which would have been good.

tummythoz - the tenants have a clause in their contract which says they must change their look every few years. Guess they went for the high end ID vs the warmer atmosphere.

adrian - yes, I'm personally sick of KLCC's food. Sometimes I have to crack my head on what I want to eat.

cutie - yes, it is quite pricey as after drinks and etc, can come up to abt RM50 per pax.

paprika - thxs for the tip! Sigh, guess they are like Cuppacakes. Look good from the outside but not nice.

teckiee - service is pretty good as they have few tables.