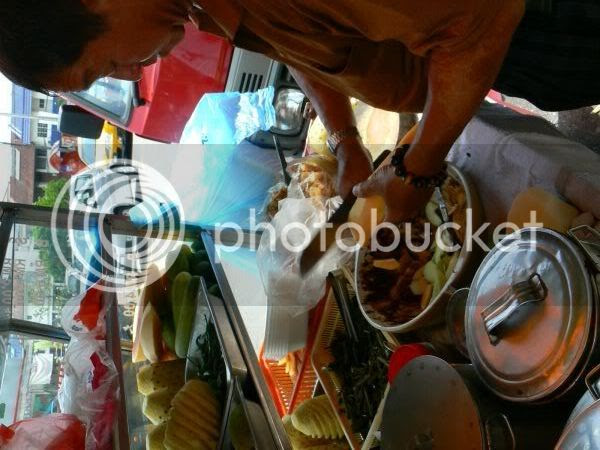 I'm often at the Taman Tun Dr Ismail area since that's where the pet shop we get our kitty supplies is located. Every time I'm there, I notice a van packed opposite the KFC which sells fruit rojak and tofu bakar and is run by a Chinese couple. Now on days when they're not around, instead it's just a man with a motorbike stall selling fruit rojak. According to my sources from the pet shop, this man is actually the father of the lady who usually sells from the van. Whenever she's on her off day which is Thursday, he steps in and sells rojak. 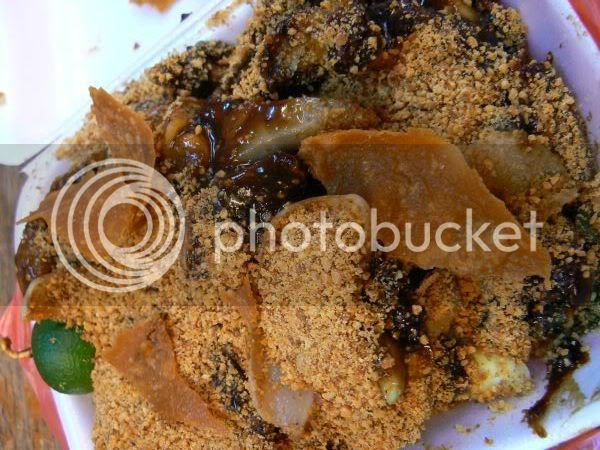 I've tried the daughter's rojak before which was pretty good stuff but after you taste her dad's rojak which is the original recipe, it pales in comparison. Here at his stall, he uses a different method - instead of pre-cut fruits and vegetables, he slices them as and when you order so they're not dried out. What is most important is his rojak sauce which is so much thicker and aromatic compared to his daughter's rojak sauce. We reckon she doesn't make it as thick since it's more cost effective for her business.
For this version, it was the ultimate one at RM5 which came full of blanched brown sotong, tiny grilled sotong, blanched kangkung (water spinach), chopped pineapple, cucumber, papaya with crunchy yau char kuai slices. Coupled with his thick rojak sauce, a sprinkling of crushed peanuts and a dash of calamansi lime juice, it was absolutely delicious. Do give it a try the next time you're around this area on Thursday or if you're lucky to spot him around.
Fruit Rojak Stall
Opposite KFC and in front of the furniture shop next to the 7 Eleven
Jalan Tun Mohd Fuad 1
Taman Tun Dr Ismail
Kuala Lumpur
(Pork free. Only available on Thursday afternoons or any days the van is not around)
*Disclaimer: The opinions expressed here is entirely based on my personal tastebuds and may vary for others. The reviewer also declares that she has not received any monetary or non-monetary compensation from the restaurant for writing this review.

Tagged with: Malaysian Food + Fruit Rojak
Posted by boo_licious at 12:00 AM

Yeah i remember this uncle. But last time i usually got his rojak at uptown. where the old fajar located. his rojak is special where got yau char kwai. taste great. like it.

eemmm, really? r u sure?

i remember cursing after trying it. BUT, perhaps it was the 'other' motobike stall/uncle huh? alrite, let me cek this one out...lol.

I like the rojak at Uptown Hawker Centre. Mr Choo, he use to sell in front of Fajar area too but that doesn't look like him in the pic (if Adrian is talking about the same stall).

wahhh my fav rojakkkk....i like the one near to atria shopping center... outside with the uncle selling it... have u tried b4?

Ohh..yes yes..i love the one near Atria too. But yours look good too..i love it with lots and lots of crushed peanuts.

I first met this uncle at Bangsar Baru, at the corner outside the old MPH. He told me that his daughter runs a similar stall in TTDI and boasted about how good his rojak is. I beg to differ. I don't know...maybe that particular day, he wasn't in his element.

hubby absolutely adore his or even his dotter's rojak!

i love his daughter's rojak!
i used to be such a fan, i'd be there every saturday all the way from ss3 [yar, boo, we used to be neighbours and play masak-masak together]
i prefer hers to her dad's.

Oohh, you are torturing me. I love rojak. Any kind of rojak. I've bought from this stall before. Yummy......

adrian - that is what I read before on someone's blog but I think he does not sell there anymore as he didn't mention to me that location. Will double check with him.

ktx - If you like very thick and aromatic rojak sauce then this may suit yr palate.

wmw - no idea but I did read from another blog that he used to sell in uptown long ago.

joan chew - yet to try that uncle. Heard he adds bean sprouts in his. Will look him up another day.

precious pea - yes, crushed peanuts are a must. He sprinkles them in his rojak to keep it from drying out.

hire - could be personal preference. His is definitely different from the other types as his sauce is so thick.

what a lulu - really? wow, it is a small world indeed.

sc - hmmmm, must go try the atria one since everytime I blog abt rojak, everyone says go try that one.

whoa..i know wheres the place but ive never noticed any vans..will pay attention the next time we r thre

WOw, Boo, what a great find. I read the ingredients you listed, it has got all the right portion and my favorites..squids, thick sauce, and lotsa crushed peanuts. I'm definitely sold ! So, now, I've to remember Thursdays hehe, thx !:)

Alamak ! Looks like everyone tried their ROjak before but why i haven't?? * cry cry* I love my rojak to add a lot of calamansi juice!

I like the uptown rojak but not sure where it is now since no more fajar. I think the rojak at different states taste different. You can see the Kl one got more variety of crispy stuff like prawn cracker and yau chaw kaw, crispy too fu.

kampungboycitygal - the van is usually there esp in the afternoon.

melting wok - yes, u can visit when u're back in KL.

jackson - quite far for you though.

big boys oven - yeah, every state or town always have their differences in cuisine.

wonder if its the same fler in bangsar?

When i was a kid.. i always tot rojak was called "loya" ... the uncle i buy from always say "loya loya...loya loya". When i was older I only realised that he uncle "lau fong" when calling out rojak rojak.

Ehh.. the rojak in KL used to drizzle with calamansi juice? Won't it tastes sour-er?

fbb - dunno, never eat the one in Bangsar before.

If you see the van with his daughter making rojak, try the tofu bakar which is done by her husband (with their 2 cute boys as little assistants). One of the best in town IMHO