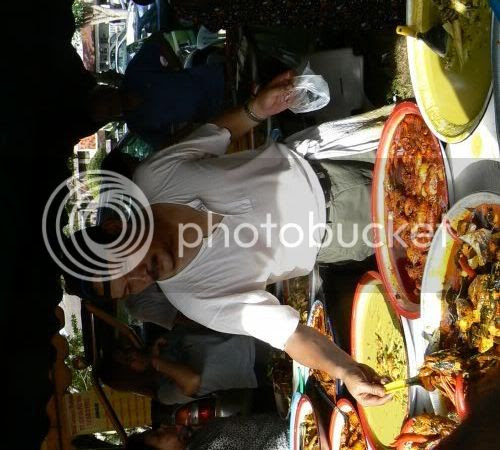 During the weekend, we decided to explore a new Ramadan Bazaar which we both had not been before i.e. the one located at SS18, Subang Jaya which was introduced by one of my readers, Fulltime Mom. It was extremely sunny and that played havoc on my pictures hence you see some being affected by shadows. What was most amusing was when we were walking around and snapping pictures, I got spotted by Fulltime Mom and her family. I guess it's not to hard to spot me since I was taking pictures like crazy but I think it's my first time being recognised by one of my blog readers! She was really sweet as she told us what was yummy at the different stalls.
The bazaar had quite a few interesting items that you don't get at other places. I saw quite a few Masakan Melayu stalls at this place. The items are all cooked ahead and put on these large round metal platters. You can't really see the dish the man is handling but they had decorated it with fish heads and etc. 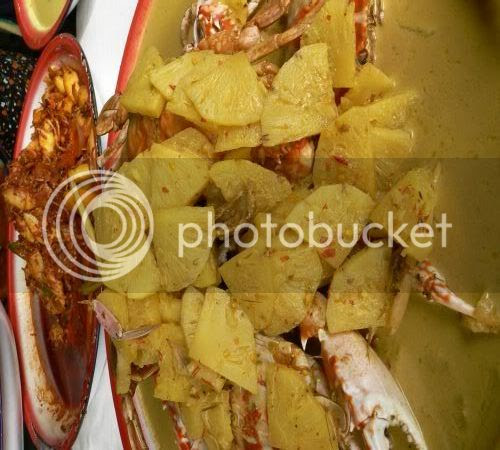 Some of the dishes were really unusual like this crab cooked in very rich coconut curry and topped with pineapples. At first we thought it was Masakan Minang but the stall owner clarified for us that it was Masakan Melayu. 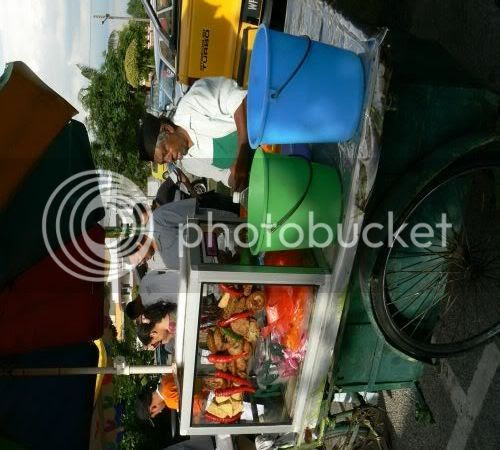 Just at the start of the bazaar, you will see this man with his rickety Indian rojak stall. Definitely a classic design that you don't see often in town anymore. 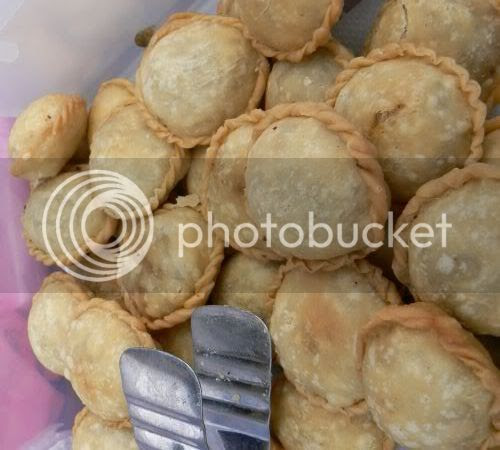 Fulltime Mom recommended these Tembosas Cikgu Tom which originated from Johor Bahru. They are selling two varieties - beef and prawns for RM0.50 which is quite pricey. We tried one each and liked them as they are much nicer than curry puffs with their flaky pastry case. This stall was also selling lasagna and shepherd's pie which was very unusual in a Ramadan Bazaar. In fact, western food seems to be featured quite a bit here as we also saw another stall selling lamb shanks, lamb chops, chicken chops and etc. 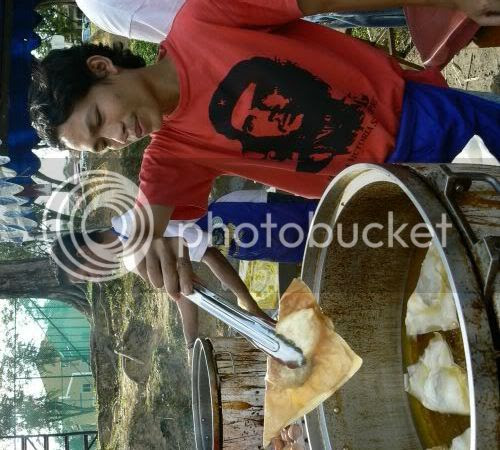 Another Fulltime Mom recommendation - this Tunisian stall. They were selling Tunisian Briq as you can see above being deep fried. It's similar to a spring roll since it uses the popiah skin but it's triangular shaped. There are two varieties - beef and chicken which are selling for RM2 each. The filling is made from potatoes and either beef or chicken. Just before they deep fry the Briq, an egg is added. We tried the two varieties and liked the beef one as it was tasty. It's advisable to eat them when they are piping hot (a feat that is difficult during Ramadan since you usually buy the food ahead). 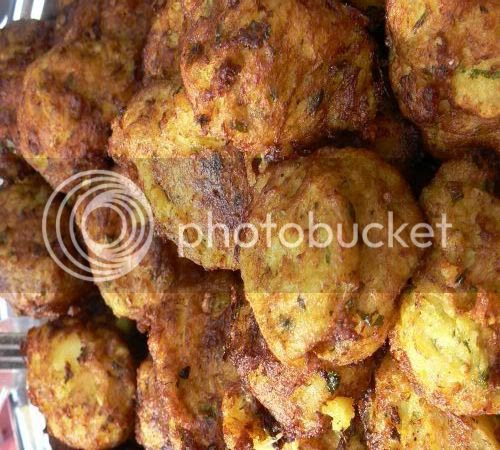 Besides the Briq, they were also selling these cutlets which looked interesting. However it was their Briq that is the best seller as everyone was buying that deep fried snack. 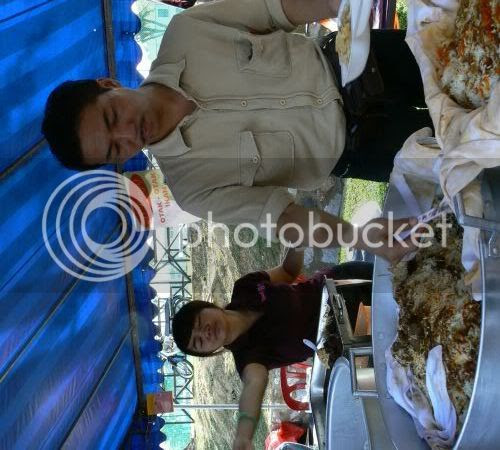 We tried the Bariani Power House on Fulltime Mom's recommendation. They use large steamers to cook their Bariani Gam that comes in three varieties: chicken, beef and mutton. We had the Bariani Daging Gam and the rice is quite fragrant but not as fluffy as the one in TTDI which is still my all time favourite. Incidentally, Sheraton Subang Hotel has also set up stall at the beginning of the bazaar to sell Nasi Briyani at RM8 whereby RM1 will go towards charity. 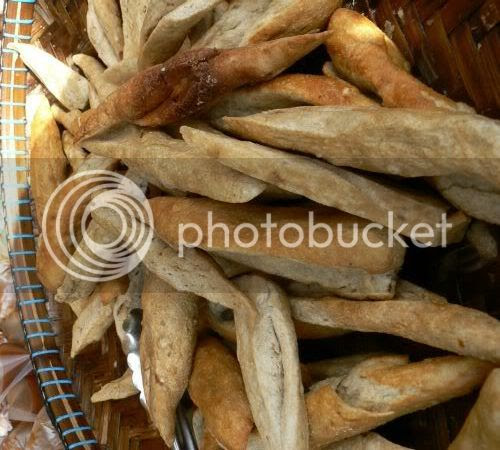 You get these keropok lekor stalls all over the place but usually they sell the thin varieties. This one had the larger variety which can be quite chewy. 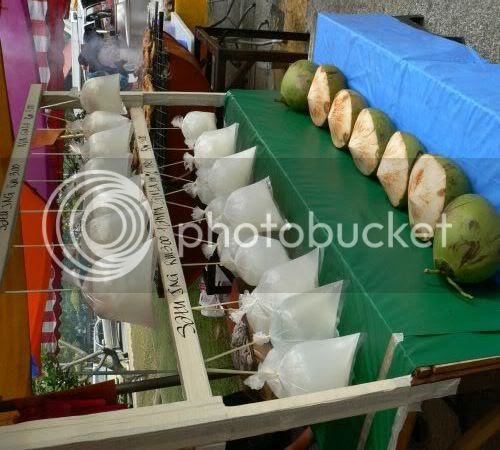 I liked how they arranged their coconut water drinks at this stall - extremely eye catching. We also saw an unusual combination at another stall - Milo and Cincau. Quite a lot of people were around this bazaar - the same Colgate people I saw at TTDI's Ramadan Bazaar and kids going around asking for monies to be donated to orphanages. 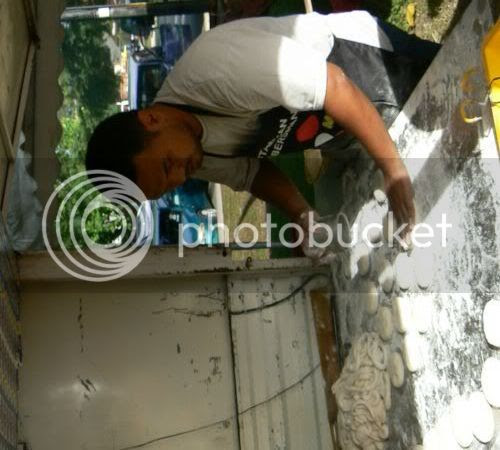 It was so difficult to take people working at the stalls as I was hampered by shadows with the hot sun. I did catch this man making doughnuts or char kuey for his stall. 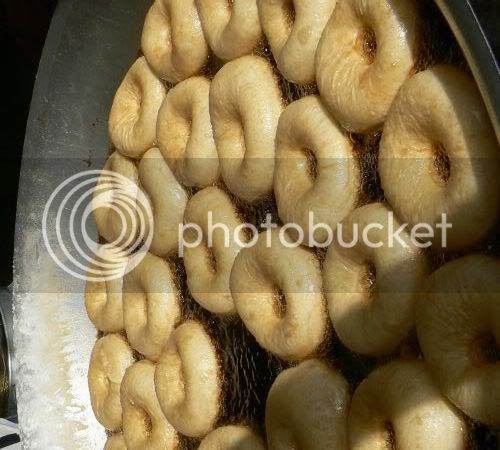 They looked so nice and puffy when they are inside the wok full of hot oil. 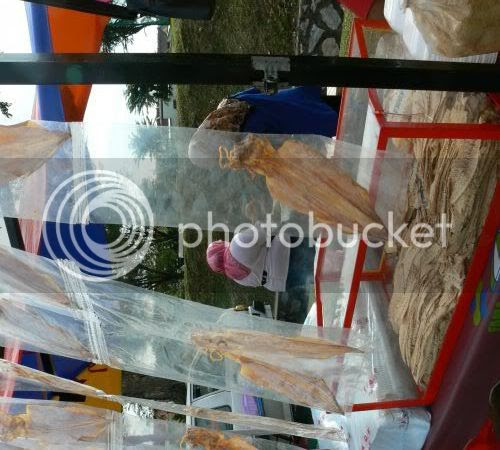 I saw quite a few of these stalls last year at Shah Alam which have dissapeared i.e. Sotong Bakar. The dried squid strips are roasted on an open fire and if I am not mistaken, this variety is then softened by knocking it with a hammer. It can be quite smelly hence it's definitely an acquired taste. We were fascinated with this sweet dessert - puding Johor. It's basically a corn pudding served with creamy corn sauce made with coconut milk. Pretty nice and refreshing especially when taken icy cold. Another interesting item this stall was selling was Sum Sum that is made from ground rice flour. I read about it at Robyn's blog and we gave it a try. It's pretty nice especially with the gula melaka syrup that adds the taste to it. 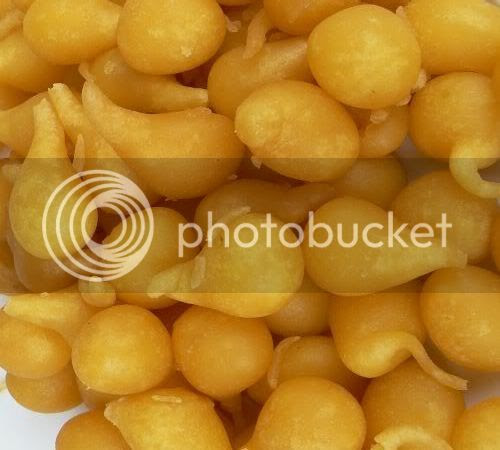 This is something you don't often see in Kuala Lumpur - the Kelanatanese sweet called Buah Tanjung. It's very sweet like all Kelanatanese desserts are since it's soaked in syrup and is made from rich duck egg yolks. 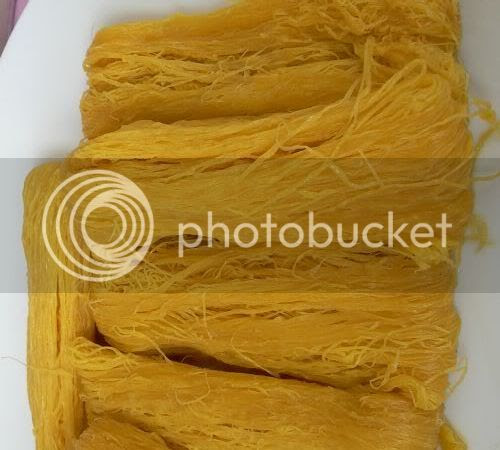 Another variety is Jala Mas that is shaped in thin vermicelli strips. Also made from duck egg yolks that gives it the golden yellow tinge, it is also soaked in syrup.
Ramadan Bazaar
SS18 Subang Jaya
(The bazaar is at the road parallel to Persiaran Jengka. If you are coming from Subang Parade, turn right just before Subang Parade and drive straight down past the traffic light where Spice Garden Restaurant is located. You will see the bazaar on your right hand side. Most people park at the side of the highway or you can go inside the housing area to park.)
Tagged with: Malaysian Food + Ramadan
Posted by boo_licious at 8:50 AM

tekko - I usually upload pixs first and save as draft the night before. Guess you caught it just before I saved it away. Write up is available now.

the chili squid and keropok lekor just made my mouth water and my tummy all rumbly!!

Boo.... i didnt even realise that duck egg kuih which i am going to try today.

ic... SG asked me what's that little golden snacks, now only I know it's called Nekbat. great Ramadan Bazaar series you have!

boo-licious,
This is too much. I'm sitting in my office working late this evening and I only have a few dates to break my fasting.
Those beautiful colorful agar-agar make my knees turn to agar-agar too.

flower - poor thing. The bazaar in Sec 18 is pretty good.

may - go satisfy that hunger!

fulltime mom - I think that must be super sweet since it's soaked in syrup!

meiyen - most of the bazaars are selling keropok lekor but this one was selling the thick version.

KY - I guess you can stop by the Kg Baru one on the LRT.

kelly - must stop soon as running out of places to go!

anasalwa - poor thing. Hope you get to break fast with all these delish food soon.

Boo, tell me, how many scrumptious Ramadan Bazaar's are there in KL? I just love all types of food at each place! Have you tried all the food at each Bazaar?

lannae - I try and buy food from each bazaar to taste them but only a small selection. There are lots of bazaars in KL since every area has their own. This is just PJ, yet to do inner city KL.

boo, I've been searching for buah tanjung for about 5 years now. It's hard to get them here. I even blogged about Kelantan delicacies yesterday.

nekbat is shaped like a baulu and softer compared tu buah tanjung. Your photo is buah tanjung's photo not nekbat.

attiesya and inmine - thxs for the info. Will amend the post. Is nekbat also soaked in syrup and yellow in colour?

Nekbat is soaked in syrup and the colour is more to orangy colour.