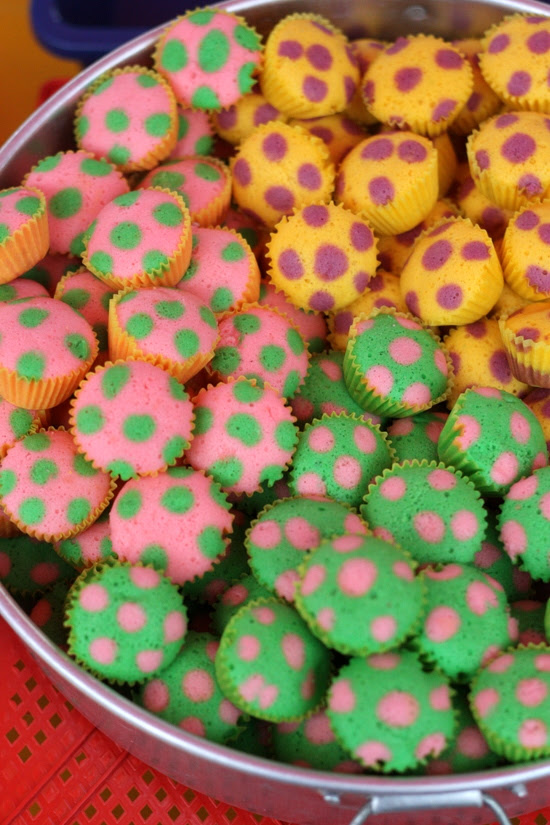 It always amazes me how good plans go awry at the last minute. I had grand plans for tackling the far flung ramadan bazaars for the weekend BUT a shoulder sprain or strain plus that stupid thing called work threw life in disarray. Since there was no way I would even be able to hold a camera and snap pictures, I decided to forgo the bazaar. 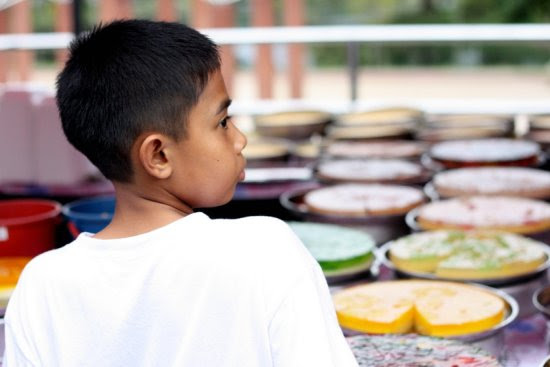 Luckily after some much needed bed rest, popping celery seed pills (the miracle cure), it felt so much better that despite a twinge and wince at the shoulder, I could manage the Bandar Tun Razak bazaar. It is still up and down with the shoulder where pain seems incredibly correlated with the lack of beauty sleep. Sleep 8 hours and it works perfectly but give it the usual 4 hours ration and it goes into whack 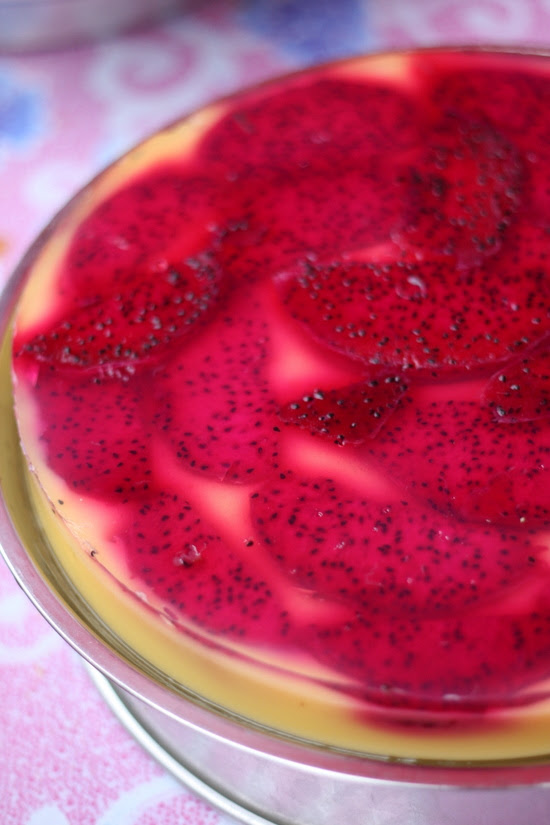 Back to the bazaar, which I stumbled upon last year. Unlike the previous year, the authorities seem to have done away with the massive tents that covered the walkway and left people to fend in the forces of nature. It makes slightly better picture taking since it is brighter but I do wish they had not picked magenta as the tent colour since some pictures end up with a reddish tinge. 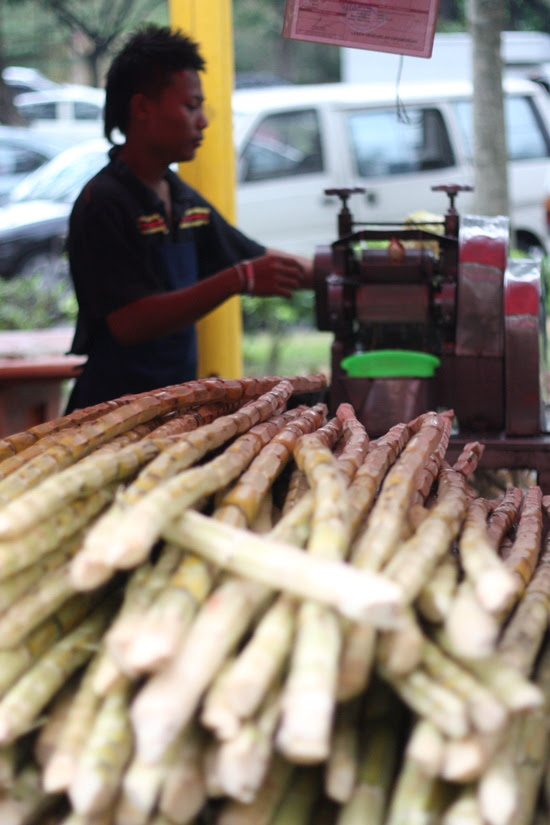 The bazaar is massive. I reckon there are 250 stalls all jam packed in this space in front of the lake. There's some new fangled items here such as the adorable polka dotted steamed rice flour cakes or apom. The artful dots and contrasting colours give it a ladybird look that kids adore and obviously can't resist.


The creme caramel and fruit puddings stall I featured in Taman Tun Dr Ismail also has a branch here selling the same wares. There are slight differences though as they don't look so artful. Nevertheless they have the fuschia pink dragonfruit jelly that makes the knees weak. Incidentally, I had a taste of the creme caramel from this stall and its pretty darn good stuff - smooth eggy texture that goes well with the sweet caramel. 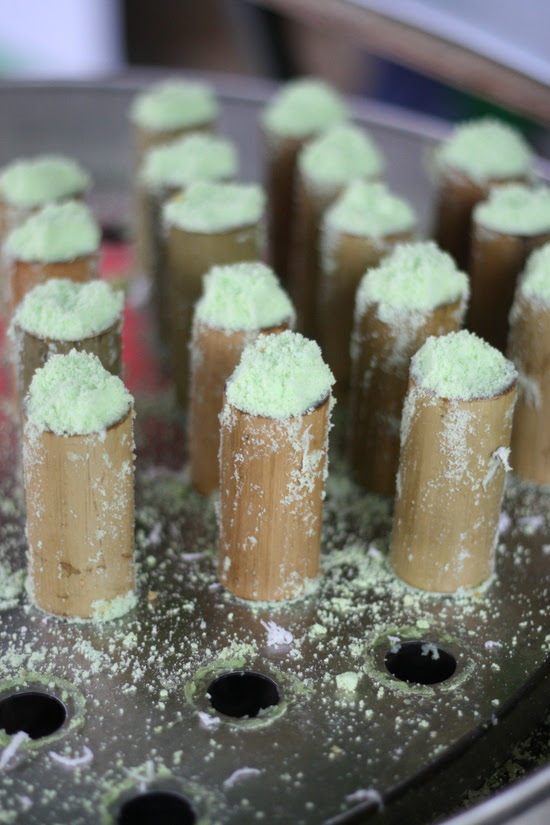 In terms of unique stuff on sale, there seem to be quite a few vying for that award. We stumbled on an old favourite, tepung pelita. The soft wobbly dessert is usually in a leaf basket. Usually made of coconut milk with a pandan layer below, they serve the taro version here - purple lavender layer with a wobble and a harder layer below studded with taro cubes. It's unusual to look at but honestly, I didn't think much about its taste, probably because not a lot of taro was used. 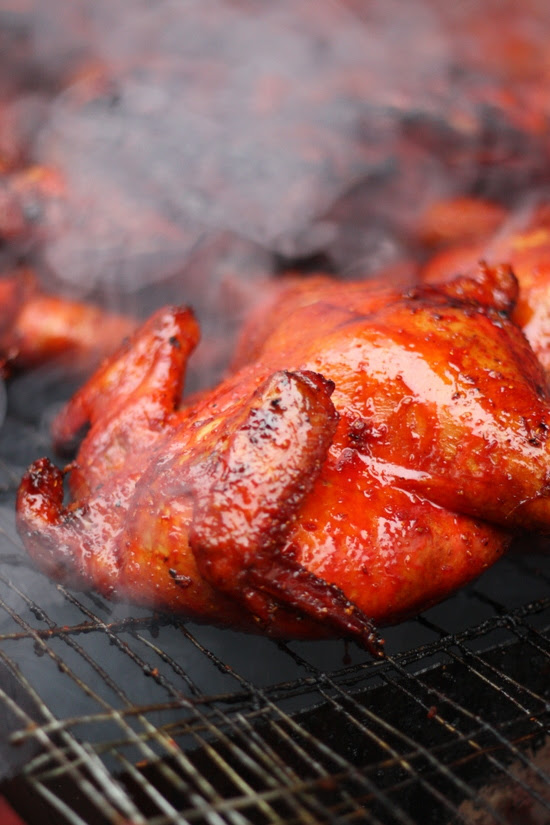 A twist to an old favourite is the pandan flavoured kuih bambu. Rice flour is beaten with pandan flavouring (the guys claim with real pandan leaves). Technically meant to give it a bang of pandan flavour, the stall failed in executing it since most of the steamed rice flour cakes seem a little overcooked and not as fluffy as the other putu bambu stalls. 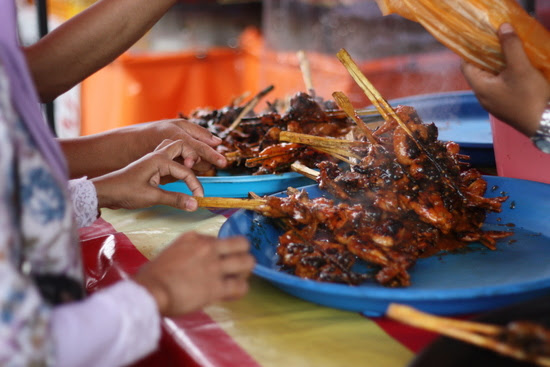 The authorities seem to have segregated some stalls together i.e those with the huge smoke flumes are banished to a corner to smoke out their competitors. Special to this area I notice is the ayam istanbul or turkish - glistening chickens being cooked on the charcoal grill that is basted in a honey like sauce. 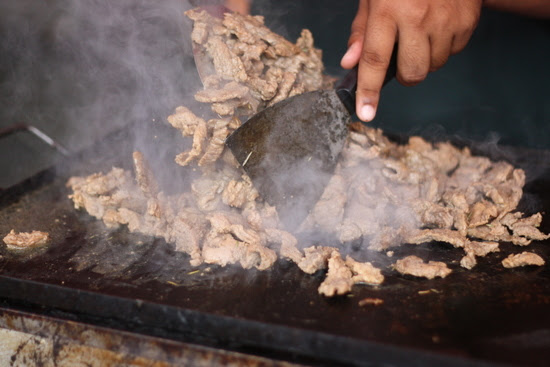 Around this corner is one stall selling deer meat. It's pan fried on the griddle and chopped onions and capsicums are added into the whole meat mixture. It's a little underseasoned and not as tender as 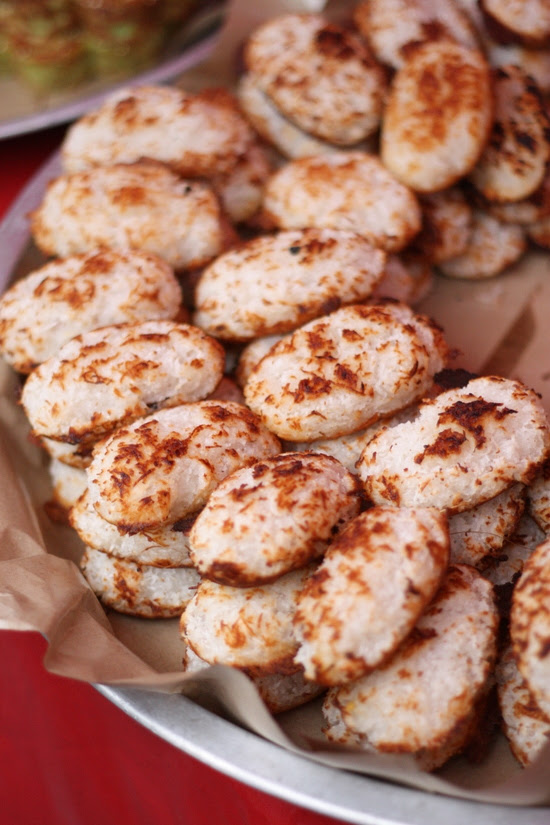 Another specialty from here is the nasi lemak ayam dara - fluffy steamed rice perfumed with coconut milk and crispy chicken. Just spot the stall with the longest queue and you won't go wrong there. 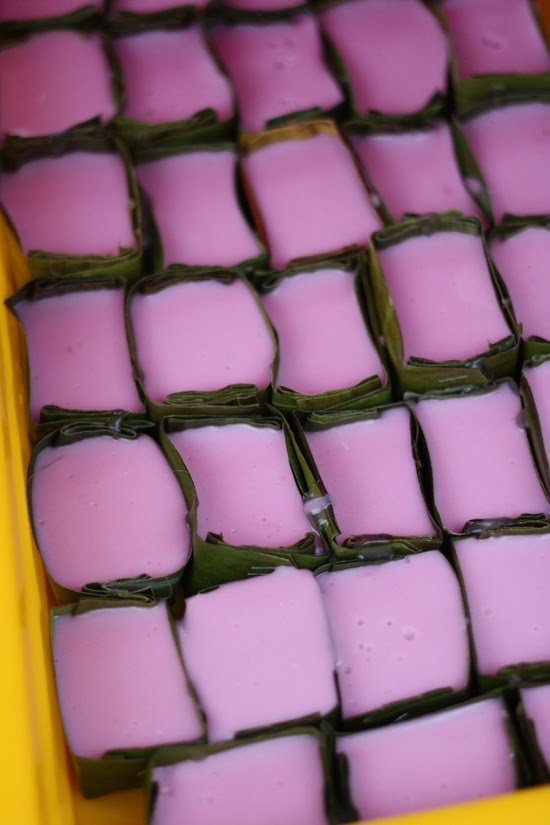 There are also akok stalls, the eggy custard rich cake. I spot so many stalls selling akok that trying to locate the guys I featured last year was like a needle in a haystack. 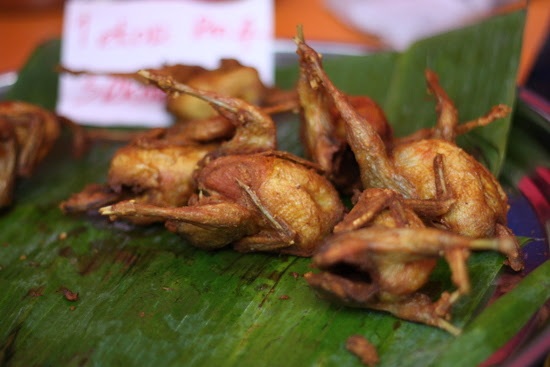 Overall, I enjoyed the bazaar with its mix of new and traditional food. Parking is on the roadside, ample space there for you to slot the car provided you don't arrive super late. For more pictures, see my Flickr set.

Oh..I really hope that my ulcers can recover faster so that I can enjoy those delicacies too :(

Your first photo is so cute! Ah I miss the real bazaars in Malaysia! Hope your shoulder's all well now!

One of the best Putu Bambu i've had was up in Cameron Highlands. I dunno if it was the cool weather, but the steaming hot putu was so yummy and comforting.

OMG those polka-dotted steamed kuihs are so pretty! Everything is so colorful in these bazaars!

Have always love your ramadhan bazaar photos! So colourful and happening. I have never been to one! So by looking at your photos, I can know more about our culture : ) and I salute to your determination to go despite your shoulder sprain.

I ahve not been to any ramadan bazaars yet!!
Hoping to hit some soon!
I think i will go to this one, since I have never been there before..

Lovely colours Boo. Not my kind of food, but you take some great pictures.

I love Ramadhan time. Wish I am in Malaysia right now! Great photos as usual.

I have to say I really don't know much about Malay food. There are so many types of dessert I have never seen before, they all look so attractive. And they have deer meat too, so tempted to try them out. Next year for sure will try them out!

Ooh, do celery seed pills really work that well? Gotta try them too.

Most drool-inducing picture? My vote goes to the ayam istanbul - oh yum yum! :)

I love putu piring, but quite long time never taste for it, will go Ramadan Bazaar ..... love t photo too :p

Everything is so amazing.I am really impressed by that place.These cakes are just perfect.

I'd get lost in a bazaar like that - too many options! The food looks so colourful and interesting, I'd love to get there one day ..