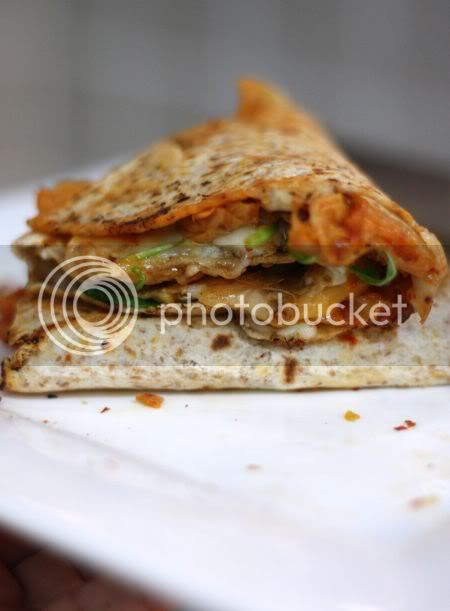 It's amazing how great food materialises from the most unlikely pairings of flavours. When I first read about the incredibly successful Kogi BBQ trucks in the USA selling kimchi quesadillas - my reaction was literally...."what are the Americans eating??" 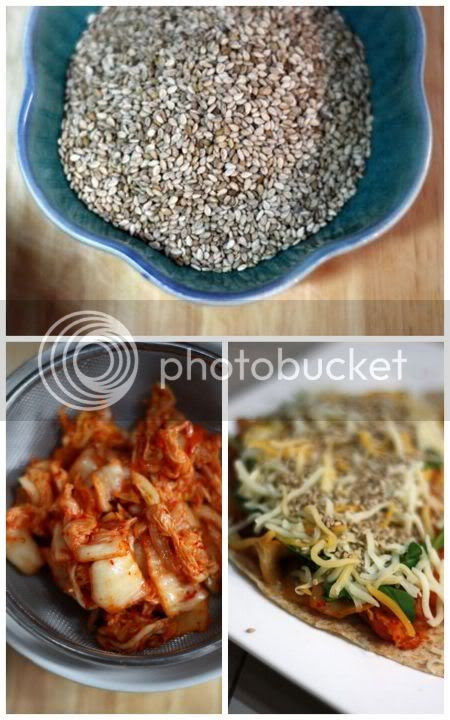 elements to a perfect dinner: toasted sesame seeds, loads of cheese and kimchi

Being a curious person, my interest was further piqued when I saw the recipe in a Gourmet magazine issue (one of those last issues before they shut down). Looks easy enough to recreate at home since all the ingredients are readily available I pondered and there's no harm in experimenting, I started thinking. 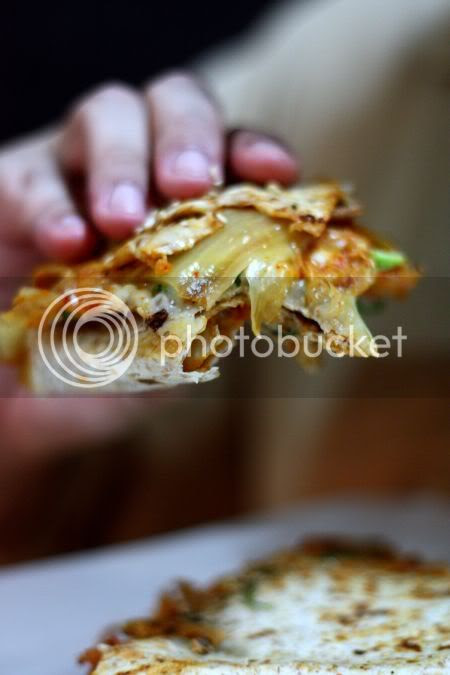 Thus one day, I was draining the pungent kimchi in the kitchen - it was so smelly the cats just walked the other direction when they caught a whiff. It felt weird to add butter to the pan and slowly caramelising the kimchi cabbage leaves. Hold on, ain't butter a no no in Korean cuisine since they usually use sesame oil or as little frying as possible I was thinking to myself. Never mind, I kept telling myself, if it does not work out I can always get dinner outside. 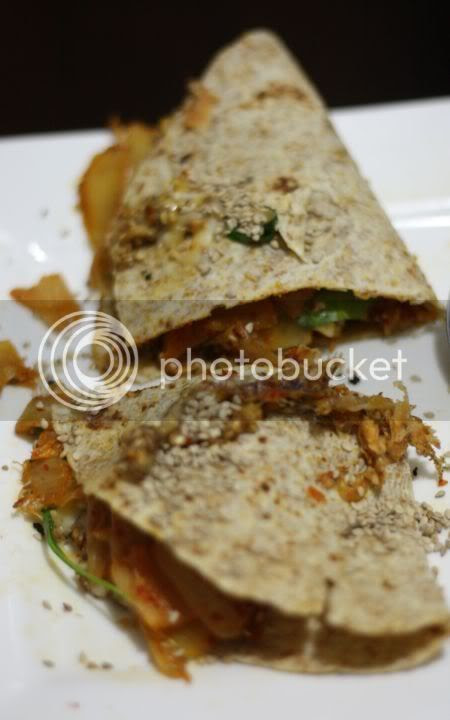 sprinkle as much toasted sesame seeds as you like for extra crunch
After assembling everything together and pan frying the ensemble on a cast iron grill pan, it did look inviting especially with the melted cheese. A bite of the quesadilla confirmed why Americans love Kogi's version - it was freaking awesome stuff!! You don't get the full whammy of the fermented cabbage leaves in this version but a mild smoky taste with caramelised bits that seemed to mingle so well with the toasted sesame seeds and melted cheese.
At first I thought, hey maybe I'm just the weird one who likes kimchi and these kinda out-of-the-world combos. I decided to experiment with Mr. Conservative Eater aka Splashie Boy and he also loved the whole combination, giving him thumbs up for the experiment. So go on people, be adventurous tonight and whip up a kimchi quesadilla, you won't regret it and may even get hooked on it. For more pictures, see the Flickr set.
Kimchi Quesadillas (adapted from Gourmet magazine)

Add the butter to a large skillet over medium-high heat. When melted, and the kimchi. Cook fo about 6 minutes, stirring occassionally, until the edges of the kimchi start to turn a little golden brown. Transfer to a bowl and let cool for a few minutes. Divide the kimchi, cheese, sesame seeds, and perilla leaves (optional) between the two tortillas. Fold each tortilla in half. Pour the oil into a large skillet set over medium heat. Add both folded tortilla to the skillet, cover, and cook for about 2 minutes per-side, or until they are golden browned and the cheese has melted. Slice into serving portions, and serve.
Posted by boo_licious at 12:44 AM

WOW...it does sound like an odd combo to me. Now I am curious how it taste like since Splashie Boy also gave thumbs up for it. I hope the Aussies catch the trend soon so i can try it out.

Mmmmm. That sounds like fusion at it's best! The blending of such unlikely ingredients :)

quite an odd marriage between Mexican and Korean :P

Looks and sounds fabulous!! Another great use for kimchi - I use it for stews, for sandwiches or simply a topping for hard boiled eggs... divine! We are forever grateful to the Koreans for kimchi!

oh what a novel idea! i know i'll love this because I always sprinkle some cheese over my kimchi ramen. shall give this a go this weekend:)

Your Kimchi Quesadillas looks amazing! I would have never thought to mix those ingredients together but love the idea!

Thanks for experimenting and sharing the great results. :-)

Have you heard of Kogi in the USA? It's fusion of Mexican food with Korean. Online Credit Score

hi boo, any idea where can i get a cast iron skillet here in KL? other than the ones from IKEA.

I'll follow your recipe to the last detail and hopefully i can have it done perfectly. 'll try it and share with my family.

Fantastic! I love the idea of this cross-culture and I am a devout fusion foodie, having had a fusion upbringing myself.

Interesting post. I Have Been wondering about this issue, so thanks for posting. Pretty cool post.It 's really very nice and Useful post.Thanks
advertising | top advertising agencies in Pakistan | Marketing Agency | Advertisement