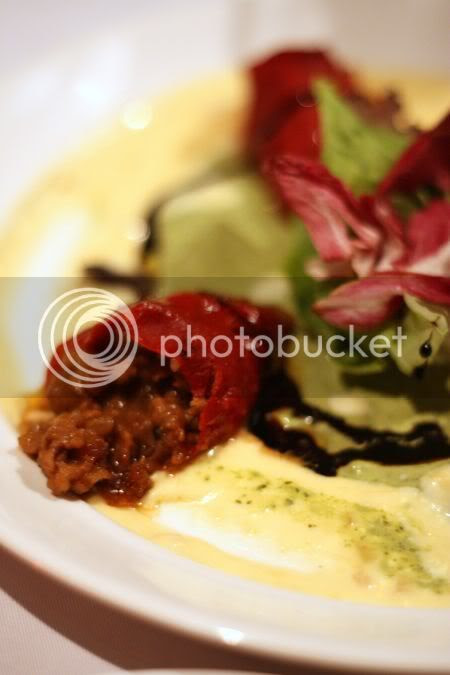 I like how some outlets just come to their own given some time. Take for instance, Leonardo's along the quiet suburbs of Bangsar - not a very new place as they opened their doors since 2009 but the food is so freakingly good that you just want to revisit it again and again. It's a far cry from those new places that open, serve mediocre food and have teething problems in terms of service and etc. Believe me, I sometimes wade through a lot of places (newbies I call them) that just don't make the cut (or satisfy the tummy) or warrant even a bad mention here. 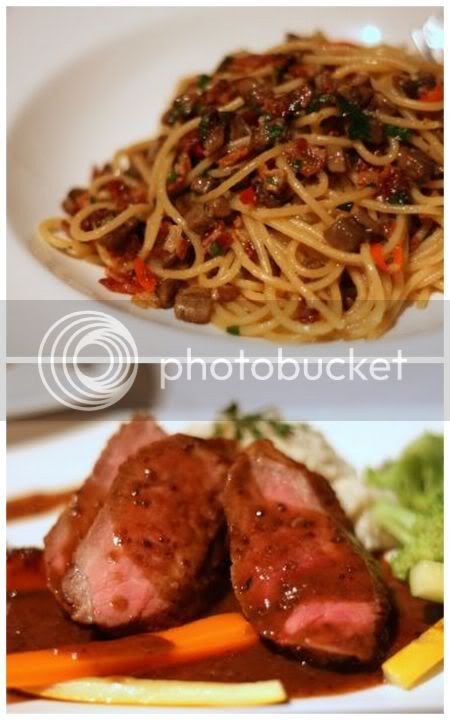 simple but lovely Ranjit's pasta, black pig shoulder loin steak
I'm enthusiatic about Leonardo's purely because it has not dissapointed me yet even after two visits and I hope it won't let me down for future visits. Judging from the positive blog reviews that pepper the whole Google search, I guess I'm not the only person shouting my approval. 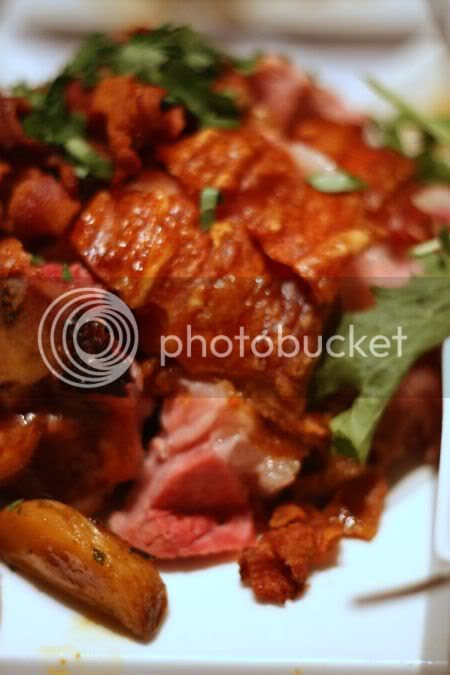 share this pork knuckle platter
My absolute favourite dish here - a must-have whenever we dine here are the amazingly good Spanish piquillo peppers (RM25) stuffed with black truffle fragranced pork mince served with salsa verde dressing and lashings of creamy sauce. It's drizzled with a reduced balsamic vinegar that seems to bring all the flavours together. Gorgeous stuff that I never tire of eating!! 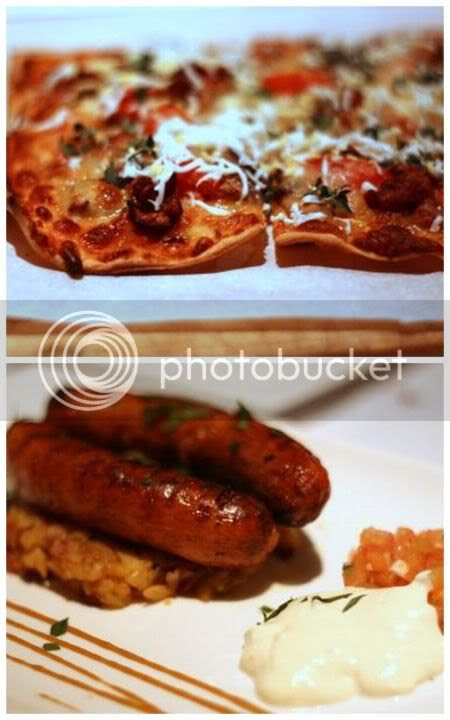 Great for sharing with lots of equally minded gastronomes is the Leo's Pork Knuckle Platter (RM75) - a hefty portion of crispy skinned pork knuckle cut to pieces with a crunchy crackling, a bacon stuffing, red saukerkraut and garlic herbed potatoes. It is served with a mushroom sauce that didn't seem to match the pork knuckle's flavours. However, the thickish apple sauce served on the side was a heavenly match with the chunky tender pork bits. They even give you the bone that one of my friends found simply yummy - right down to the last bite. 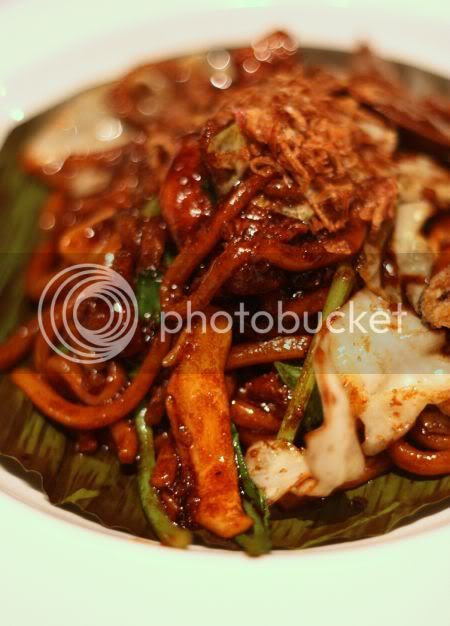 In a recent dinner, it was a smorgasboard of porky delights - grilled portobello mushrooms topped with bacon (the real stuff okay!), cheese and tomato (RM22), bacon, potato and apple rosti with grilled chorizo sausage (RM38), fried hokkien noodles (RM25), iberico pineapple pork ribs (RM45), with Ranjit's pasta (RM30) and the big breakfast pizza topped with bacon, egg, mushroom and tomatoes. While the grilled mushrooms, rosti, ribs and fried noodles didn't have the wow factor, it was still very satisfying. I loved the clean yet tasty flavour combination of the bacon bits, chilli padi, garlic and mushroom in the Ranjit's pasta - named after solicitor Ranjit Singh, one of the owners of Leonardo's whom I had the pleasure of working with before long long ago in a case. Pizza here is made by a magic number denoted by the great Leonardo Da Vinci who gave the world the Mona Lisa, great inventions including crispy thin pizzas! 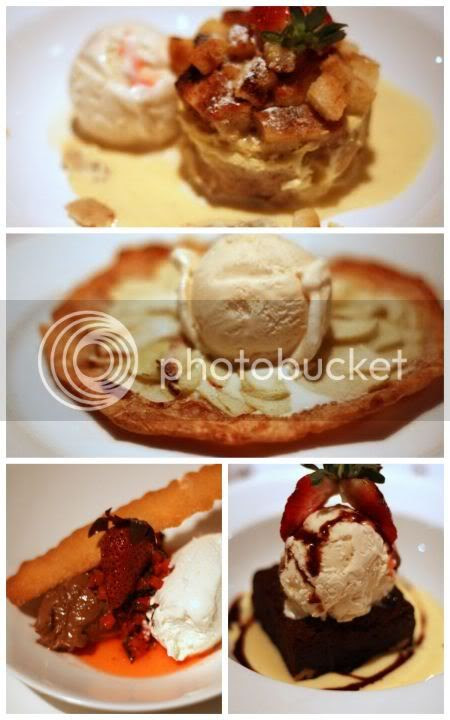 On an earlier visit, I had sampled their Spanish black pig shoulder loin steak (RM55) served with a picon blue risotto and mustard sauce. While the meat was pinkish and fork-tender, I felt it had a strong porky smell when eaten without its sauce. Once you liberally coat it with the mustard sauce, it is fine. We also tried Chef Vic's Wedge Salad - crisp cabbage served with even crunchier bacon, smoked pimento and picon blue dressing - a refreshing start to a heavy meal even though the blue cheese dressing was a little sparse (we asked for more and it was fine after that). 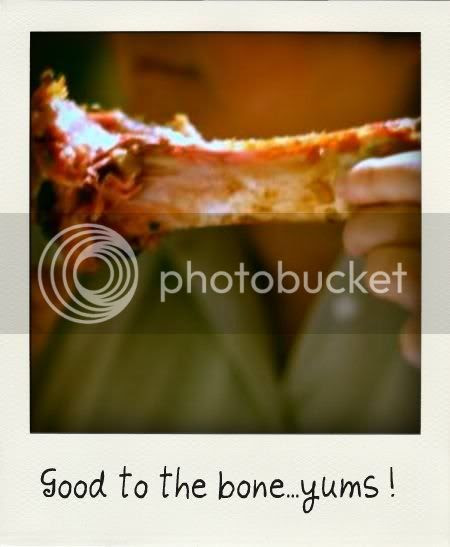 Even with the tummies filled with porky delights, we had room for desserts - didn't someone I know once mention we have a seperate compartment for those sweet treats? Let me see, we had the dark chocolate and walnut brownie with a scoop of Haagen Daz ice cream, banana bread and butter pudding with a warm rum sauce and ice cream and baked apple with fillo pastry and cinnamon creme. I liked the light baked apple, loved the moreish tasting banana bread and butter pudding but was not much of a fan for the brownie even though it was chocolate. Another item we tried before is the dark and white chocolate mousse served with vodka macerated strawberries (RM22) - a concoction that seemed to lack much oomph even though the alcohol drenched strawberries was a nice touch.

Overall, it was a very satisfying meal coupled with excellent service. Will I be back? Definitely so I reckon, for another round of my favourite piquillo peppers, another porky flavour hit and maybe some Kentucky fried frog - an interesting dish they have on the menu that I have been curious to try or some good old tummy warming bak kut teh.

(Non Halal. Open for dinner only. For more pictures, see my Flickr set.)

Tagged with: Bangsar
Posted by boo_licious at 6:13 AM

This reminds me of my Valentine's Day dinner date (sorta) with the Queen DSLR there last year. Oh it's been too long since then... Must return, for pork & peppers if not love and lemongrass... :P

nvr had a bad meal per se at this place..the knuckle is really to die for, dunno abt the bkt and hokkien mee though

I love Leonardo's too! The food's never disappointed and most of the cocktails are good too... :) :)
(Hmmm. I have heard kinda bad comments about the BKT tho)

This place definitely is a must-go and soon! ;-)

So far I've only been to Tasting Room in Jalan Bangkung. Waiting for my next visit... time is just not right

yeah Leonardo's quite a good place for porky delights.

Mmmm sounds lovely. Can't wait to come back to try it. Dinner anyone?

The food looks delicious. But it's a bit pricey for the undergraduate student (like me).

I wouldn't know which to eat first. They all look so beautiful.

Waitress trying to push us imported distilled water that costs close to RM30, even though everyone else is served free flow of plain water.

Pork knuckle was so-so, nothing fantastic.