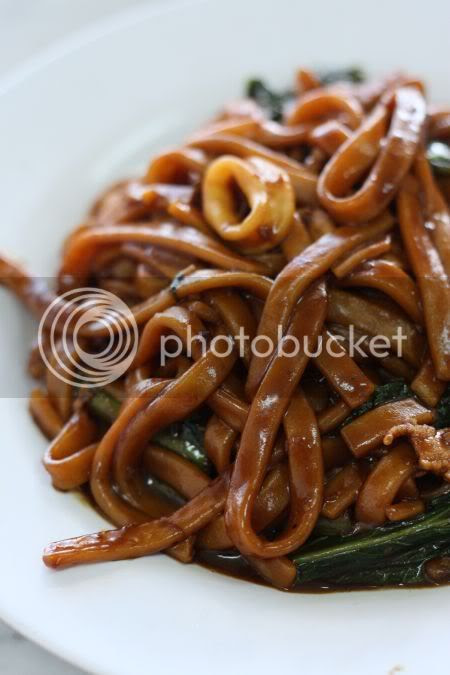 the yummiest ever Hokkien noodles

Nowadays, searching for the best ever Hokkien fried noodles is kinda like looking for a needle in the haystack ......or maybe the holy grail! My uncle has a theory that those fellas who used to wok up an aromatic charcoal black noodles with loadsa flavour have retired from active wok duty, hence the ones we now get just don't make the cut. He does have a point as I have blurry visions and memories of superbly great Hokkien noodles at the old D&C bank's corner in the city centre long long ago when I was a wee little one. Literally the heart of the city - the buses will gather across the road, adding a little "extra" into the already black-soot-like noodles, whenever they zoomed past. We used to chuckle, "that's why it's so tasty.....the secret ingredient is from the bus." fried beehoon, signboard, fishcake and signs on the table

When asked what's the secret to great tasting Hokkien noodles, people often say, "it's the fried lard bits" but there's actually more to that. While fried lard bits add a certain charm (and sinful crunch) to the silky black strands, it's actually the braising or "gau in Cantonese" part that seperates a great tasting Hokkien noodles from the sea of mediocre ones. An aromatic stock is a must - flavoured with a pinch of the dried flat fish (chor hau yee) grinded into a powder, which the noodles are boiled in until the sauce thickens. 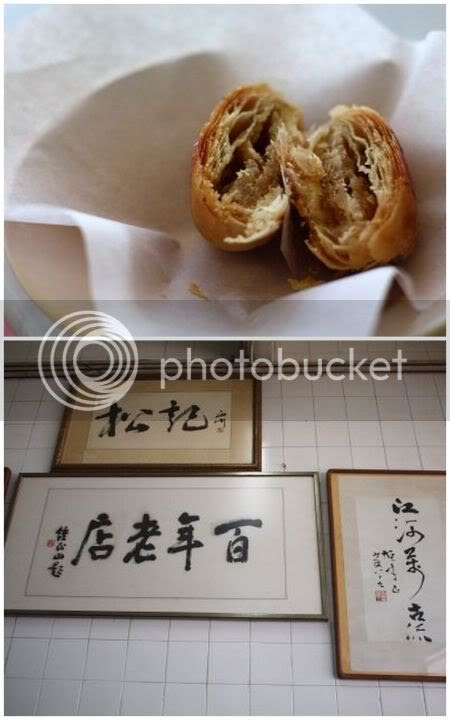 flaky biscuits, 100 year old sign
At this 100 year old restaurant more renowned for their flaky Teochew mooncakes and wedding biscuits, a must in any well deserving Chinese traditional wedding - it's a surprise to find they make one of the best ever Hokkien noodles (RM6 for a single portion). Their secret weapon - their own handmade noodles. Flatter than the yellow round noodles (tai lok mee) we usually find at other stalls, this one boasts of very little or no alkaline water, hence they taste is so much better and less artificial. Braised until the sauce just coats and hugs each strand of the noodles like a silky black dress, it comes without any fried lard fritters but is redolent with the scent of lard, since it is fried with the sinful oil. Owning up to its Teochew roots, you will find a fishball under the mountain of strands. 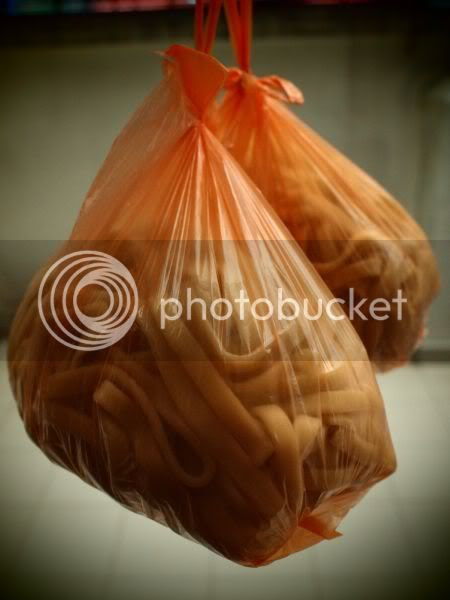 take me home noodles for 1kg for RM3.50
Another crowd favourite is the white fried beehoon, a pale looking noodle unanointed with dark soy sauce. I've eaten this before and liked it but this time round, it was a tad too oily. Nevertheless, it was still very aromatic and laden with ingredients (dried prawns, sliced fishcakes, shallots). I liked how they added a green chilli to the mix, which renders a teeny weeny tingle to your tongue from the spiciness. They also serve fishcake - deep fried with a crispy skin - utter yumminess!
On the biscuit level, we gave one a try. While it had a light flaky pastry that was fresh, I didn't quite like the sparse and not aromatic tau sar (mung bean) filling. They also have other traditional biscuits like the rice crackers, another must for Hokkien weddings. One thing that baffles me though, how a Teochew place is serving Hokkien styled wedding biscuits and noodles!! Oh well, guess there could be some intermarriage somewhere, hence the cross of cuisines somewhere. Lucky us, as it meant we get to enjoy these wonderful noodles.
Setapak Teochew Restaurant
283 & 285
Jalan Pahang
Setapak
Kuala Lumpur
Tel: 03-4023 8706
(Non Halal. Open from 7.30am to 4pm. Closed on Sundays. They also have a branch in Kepong. The place is on Jalan Pahang, further down from Tawakal Hospital but on the opposite side of the road. You can't miss the place, as it faces the main road. More detailed pictures in the Flickr set.)
*Disclaimer: The opinions expressed here is entirely based on my personal tastebuds and may vary for others. This review is time sensitive; changes may occur to the place later on that can affect this opinion. The reviewer also declares that she has not received any monetary or non-monetary compensation from this place for writing the review.
Tagged with: Hokkien Noodles
Posted by boo_licious at 12:30 AM

*gasp* i didnt know they have a branch in kepong!!! this restaurant has been around for ages and i remember lunching here quite often as a kid. the noodles here are quite well-known. and the preserved vegetable mooncake is really interesting. made with lard! woohoo!

oops, wrong info! (i blame the hokkien mee..hehe) i meant lunching at the restaurant a few lots from here...*malu only* hehe. but yeah, the mooncake's good!

Gosh this looks good ... i am drooling. so early in the morning.

Yum! let's do lunch soon? you know all the best places

for me i think the noodle is important esp. if it's home made-next is the braising part and should be fried individually not 4 or 5 plates at one time!
I always go for their signature white Beehoon.

somehow it does look dark n sinful enough..but in any case, never judge a book by the cover..lets c if i ever dare venture to setapak!

I think the ones in Jalan Pahang is better than kepong's. But nevertheless both are yums! now you r making me crave for hokkien Mee!

I love the analogy "like a silky black dress" ... Yummmmmmmmmm!

Its on my MUST EAT LIST when I come home that is :-)

Jalan Pahang's outlet will be the best! But due to the notorious reputation of the traffic on this road, I hardly use Jalan Pahang

Made with lard, made with love. :D

Now, I am craving for some! It has been a long time since I had some of this.
dining table

Agree with Julian, silky black dress hits the nail on its head!! Gorgeous post, Boo. There is nothing better to read nursing a hangover than the poetry for Hokkien noodles!

Not a fan of Hokkien Mee, but sometimes there ARE gems waiting to be discovered, or REdiscovered.
Just had a rather good Wat Tan Hor and Tai Lok Meen for dinner, which somehow ... reinstalled my faith in Kap Dai Fun.

eh, still got la.. those (original) uncles who use the charcoal.. mmmm! yarmie.

You are just like CUMI. his quest for the perfect chinese styled fried (any sorta) noodles is endless!

Hairyberry - I saw u blogged abt the mooncake before. Didn't try it this time. Bit confused abt yr statement, u ate the Hokkien mee here before or more the prawn mee around the road?? Nvr mind, not going to split noodle strands, just give it a try as it's good.

nekohime - it was yum yum yum and even more yum! Slurplicious food.

au & target - ah yes, good idea since Subang is near Shah Alam. Ok, we shld set a date and meet up. Will bring treats for the kitties!

foodbin - I think they fry in small batches as I notice the wait is longer for the Hokkien mee!

Augustdiners - maybe the old sifu is at Jln Pahang. Too bad since Kepong is so near your new restaurant that looks good.

leo - yeah I imagine traffic is bad but the other day we were lucky as traffic was nice and clear.

Life for beginners - not for the poor piggy though that suffered for our lard.

precious & extreme power - go get some!

minchow - someone shld write a poem abt Hokkien mee, it is worthy of eloquent words.

C&C - old uncles died already as they would have started so long ago, now too old to hold the wok.

eiling - they're yummy, give it a try.

Ahh..a flatter noodle u say?
Good! cos i hate the fat ones!
I think i'll like the white beehoon. will rmbr to order "less oil" !

sigh. i still dream of the hokkien mee at D&C and it saddens me.

I wonder if you knew what what happened to the cook was even sadder. Some drunkard (while backing out of parking), backed into the large boiling hot water metal tub.. right into the cook. He didn't die, but was paralyzed.

Such talent will never be found again! Til this day i am in mourning...

Louis Vuitton Travel decided to use Keith Richards of the famous Rock Band the Rolling Stones in there ad campaign. As for Louis Vuitton Shoulder bags Totes Monogram Vernis , the designers have their own brand value, even for their louis vuitton 2009 handbags .