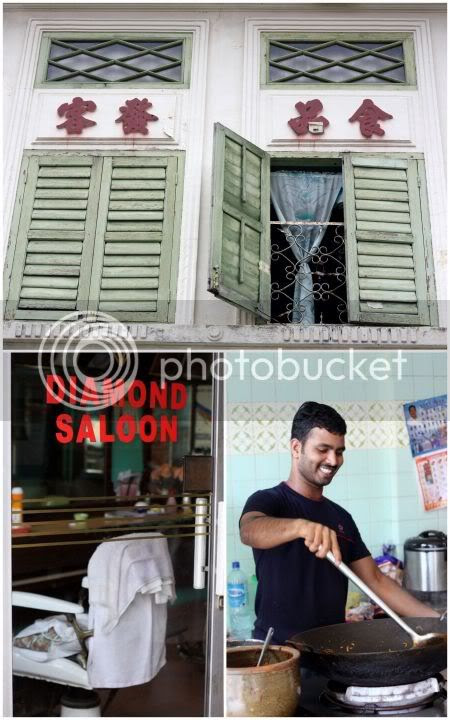 1. the amazing facade and windows here, 2. smile, you're on the camera, 3. old style barber
It's been a while, since we did some small town exploring and since we had to drop by Ulu Yam to pick up some documents, we swung by Kuala Kubu Bahru for a quick bite. As usual the journey vide Rawang is harrowing with the crazy traffic jams. The town seems to be booming, expanding way beyond the one road that you find loads of new shophouses around. A certain someone did get a little impatience with the slow driving of the locals, hence he overtook the car and unfortunately got caught for that. Turns out the police are always catching people at the Serendah corner and since we're no locals, we fell for that trap and Splashie Boy got a summons. 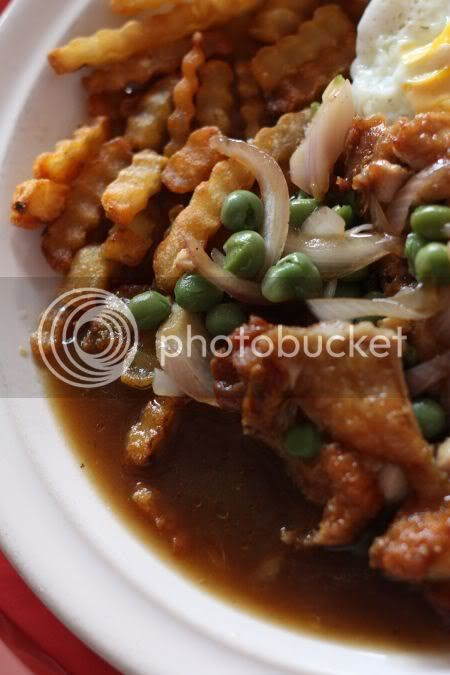 Hainanese chicken chop, simple stuff
Luckily the drive towards Kuala Kubu Bahru was uneventful after that. Been ages since I've dropped by the town. One remembers climbing the Chiling waterfalls and doing a number of river crossings here, a very long time ago. Most of you will know the town for its white water rafting now and also the town right before going up to the hill resort, Frasers Hill. 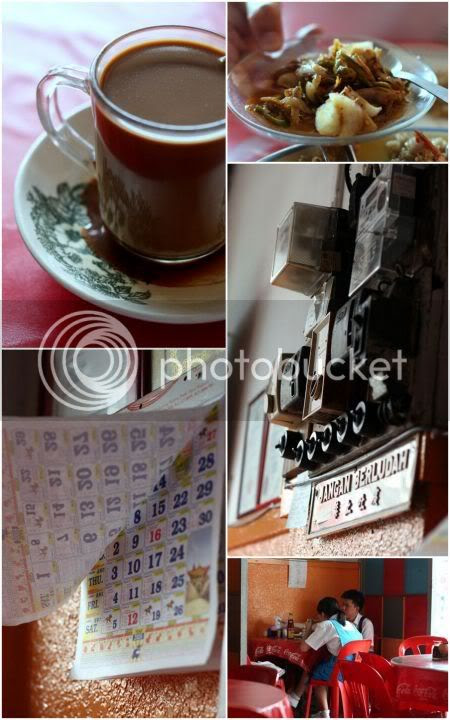 1. Coffee, 2. piquant pickles, 3. don't spit here, 4. dating couple, 5. watching the days flip by
The whole town is well preserved, with old buildings dating back to 1930s mixed with some modern renovations and new shoplots. For lunch, we ended up at the old style Hailam restaurant, Sun Sun Seng Nam on Jalan Mat Kilau. This place is quite famous with loads of Chinese newspapers cuttings on the walls. When we got there, lunch was just ending for the locals, who were still sitting around chatting. There was even a couple of school going kids dating at one corner. 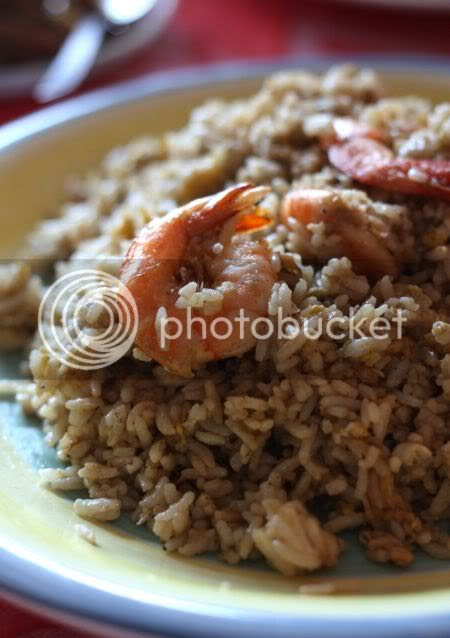 fluffy and simple Hainan fried rice
The place is obviously a great fan of Coca Cola, as the tables all have red plastic cloths with the word emblazoned on it. I liked the old wooden dividers that give a little privacy to people from peeping toms, for one side of the table. The owner is obviously an upright citizen of the town - there's a number of approval letters and accolades from the police, firemen and etc plastered all over the walls. 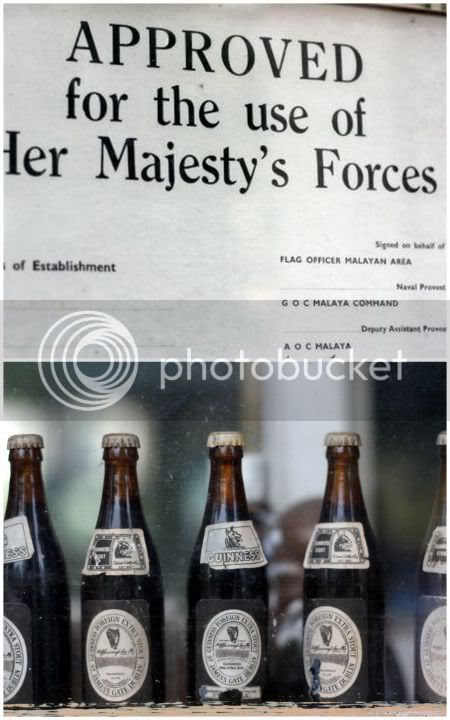 the bar with the approval, tiny bottles of Guinness from yesteryear
The menu is simple with the choices made clear cut for us - chicken chop or hailam mee or hailam fried rice. We decided to go for fried rice and the chicken chop. Thumbs up to the food! Fried rice was fluffy and fragrant with prawns and egg. They gave a sourish pickle made from green chillies, ikan bilis and onions on the side, that added kick to the rice, but it tasted fine on its own also. I liked my chicken chop, simple and plain with a brown sauce, onions and peas. The coffee was also good but not fantastic. 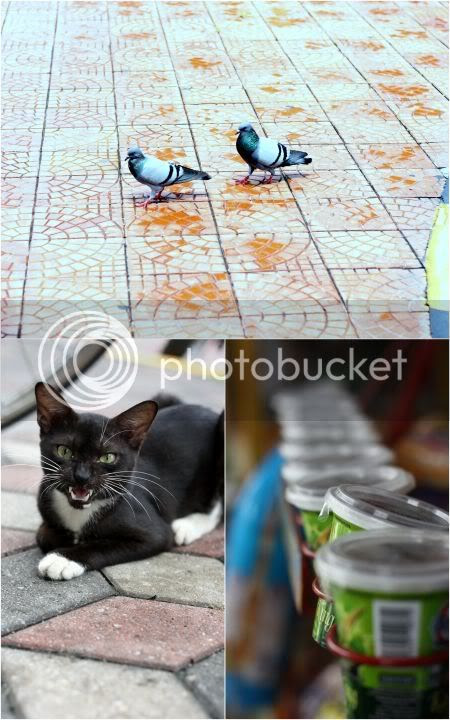 Best of all, we walked around the place and found so many great shots - an old bar with the sign saying it is approved by Her Majesty's Forces and tiny Guinness bottles from yesteryear. If you look closely, you will see each bottle has a different animal on the label. There's also an old Indian barber at one side of the road, mixed with modern shops selling Hello Kitty balloons and loads of sundry shops. Suprisingly there's quite a lot of youngsters hanging out at this town, probably because it is near a few government school hostels. Even spotted a cafe selling waffle cones! Nevertheless, the place is nice, relaxed and very well kept. Good place to drop by after or before a brisk walk up the waterfalls. For more pictures of the place, see my Flickr set.
Sun Sun Seng Nam
8, Jalan Mat Kilau
Kuala Kubu Bahru
Selangor
Tel: 03-6064 1168
(Pork free. Open from 7am to 4pm. Closed on Sundays.)
*Disclaimer: The opinions expressed here is entirely based on my personal tastebuds and may vary for others. This review is time sensitive; changes may occur to the place later on that can affect this opinion. The reviewer also declares that she has not received any monetary or non-monetary compensation from this place for writing the review.
Tagged with: Hainanese Food + Kuala Kubu Bahru
Posted by boo_licious at 12:00 AM

Simply brilliant. Love your shots. You've managed to capture the charm of the small town that's not tainted by time. Actually it's almost Yasmin Ahmad-ish!

Love the nostalgic, retro feel of this post and the lovely shots.

This is probably my favouritest post of yours to date Boo!! Small town in all its glorious simplicity! You can almost hear and feel the token eccentric small town characters lurking in the periphery of the photos!!

Another place that I never been there. Heard the kaya "kok" is nice there...

such a nostalgic post! wow ... how true, a little yasmin ahmad-ish, with the dating young couple in one corner, the serene and charming aura of the small town, and the simple, fuss free Hainanese fare.

Seems like a lovely place to explore during the weekends. I shall do that when I come back. And the chic chop...ooo...i just love crinkle cut!

the way you described the place it was like listening to the song "Penny Lane" by The Beatles.

Accolades from firemen and police? *lol*
So cute! :)

you can't really find those simplicities and charms anywhere in KL... this city has become too commercialised!!!

i must make a trip here....even if not going up to frasers. worthwhile or not?

whooppss... not commercialised.. it's modernised!!
by the way fbb.. it will worth the trip! not congested, still has the new village charm... what more can we ask?

Maybe wait for the annual 50% off summons to settle?

KKB has always been just a name on a signboard to me... never really stepped foot into the town. Nice gems all around eh? Beautiful pics.

The chicken chop looks so sedap. When I was young, on our way balik kampung to Kuala Kangsar, we used to stop over Tanjung Malim resthouse for some makan and Kuala Kangsar resthouse was also ran by a hainanese couple. Love their cooking. Another pit stop that we never missed, a little kopitiam in Tanjung Malim where the famous pau is. Not sure whether they are still there.

Old kopitiams and colorfully matched mosaics. Missing? Hope to drop KKB and FH but heard the new road is impassable?

reminded me the time we had summon cause we park by roadside at kluang for breakfast at the infamous kopitiam!

qwazymonkey - hmmm, didn't think abt the Yasmin Ahmad angle but yeah, now you mention it, it does have that feel with the dating couple.

550ml, awww, such nice compliments that made my bad work week perk up!

simplegirl - no need to watch, just take a trip out of the city and u'll be in the olden days.

Thxs David for dropping by, sounds like a great cafe. There was also a popular Indian Chettinad place across the road, seemed to be the new place in town.

j2kfm - u probably see these towns all the time, but for city folk like us, quite a big thing.

Precious Pea - good idea, we go when u come back from Down Under.

Hi, I'm new to KL (from the US) and just found your blog -- I love it! This Ramadan Bazaar looks SO amazing, and we'd like to go this weekend. I'm trying to figure out how to get there using your directions and Google maps, but I can't seem to pinpoint where Apollos is on Google maps. Is there an intersection you can give me so we can figure it out? Thanks, and we're looking forward to checking out some of these delicious looking places on your blog!

i'm a kkb local
the kaya puff definitely should not be missed
the bakery is at another street behind the barber shop (maxwell street). the name of the shop is called yun's bakery. yet the shop is closed on Sunday

Had an opportunity to sample the chicken chop, hailam mee and kungfu noodles today (6/2/2012). They were bad and definitely not worth the visit.