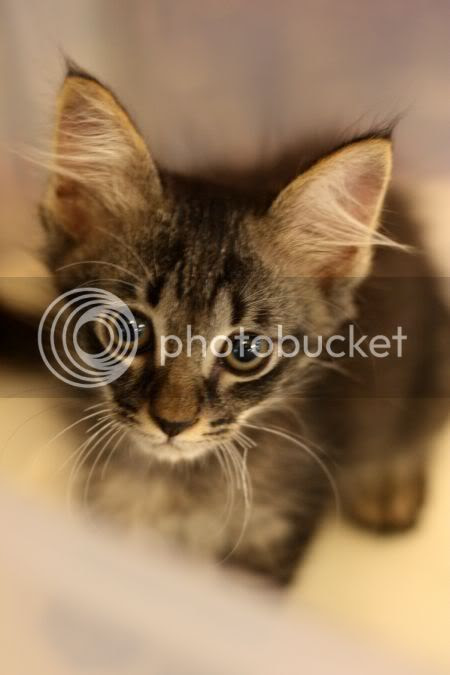 Last weekend seems to be aptly summarised as the 3 C's....kicking off with Chowtut - a foodie's ultimate paradise meal followed by a visit to sinful melt-in-the-mouth Charsiu at 747 (nope it ain't the plane!) Kopitiam, Sunway Damansara and ending with Mr. Cuteness, the stray kitten we rescued a few weeks back. 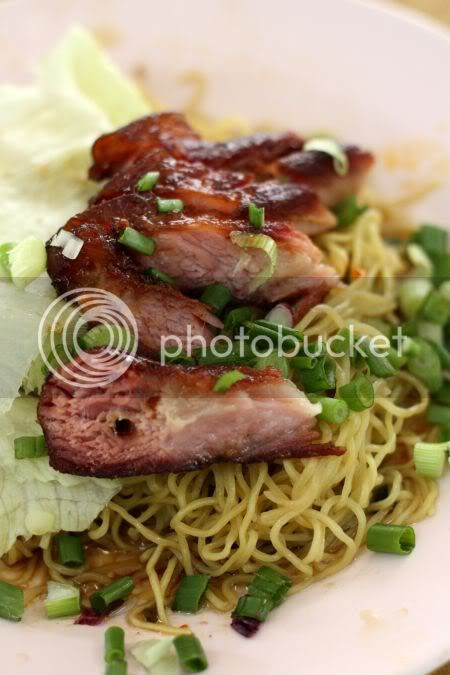 char siu goodness with springy wantan noodles
Foodies tend to do the craziest (but definitely the best) things in life to make sure they get the best out of the world. Take for instance, the super fun group from Integricity (also the people behind theQguides). These are ultimate foodies who devised this wicked feasting idea aka the Chowtut - a smorgasboard of the best in terms of hawker food. 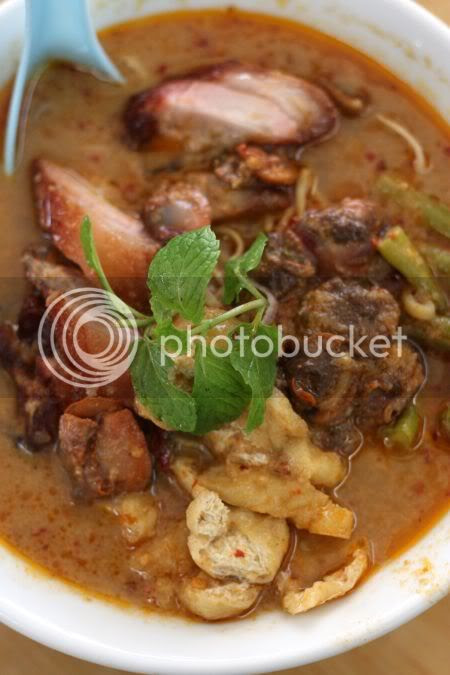 The list of items for the meal is like a Penthouse magazine centrefold spread for a raving hormonal teenager (or maybe just any average male) - droolicious, tempting and even better than just silicon & paper, it was incredibly edible (and lickable!). 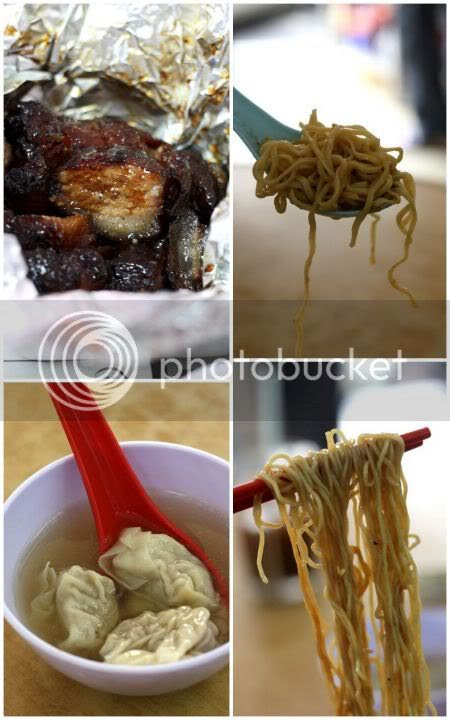 1. the packed char siu that started the cravings, 2. thicker and not so springy noodles for the curry mee, 3. springy homemade noodles, 4. large wantans with dried sole powder

Thus it was Pan Heong's mee mamak & sang har meen, Krispy Kreme doughnuts, Hatyai Street's crispy pork knuckle, Teluk Pulai's bak kut teh, Village Park's nasi lemak ayam, Ngau Kee's beef noodles and beef balls, KFC's original and hot & spicy chicken, 747 kopitiam's char siu noodles and extra portion of delectable char siu and Mama Kitchen's 2 versions of butter squid and braised pork noodles - all at one go, so imagine the multiple orgasmic sighs of happiness the tummy was making with the great spread of food. Thanks so much to Frat Mustard (the guy around the town) for inviting, as it was a one-in-a-lifetime experience. 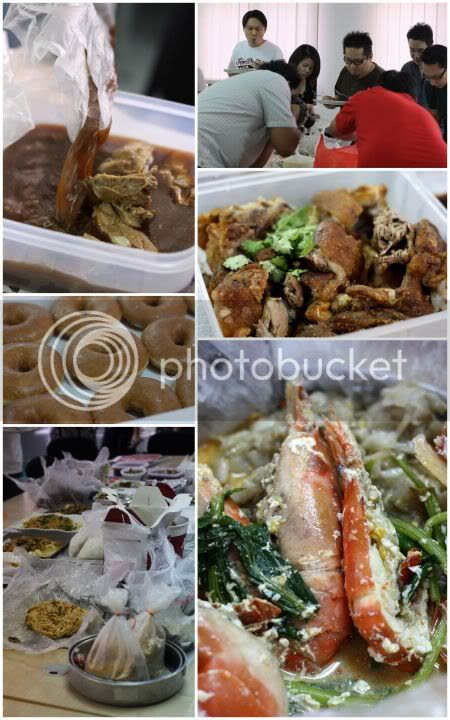 Through them I discovered the joys of 747 (SFS) Kopitiam at Sunway Mas. Gosh the char siu was so sinfully good - literally just fat with a blackened crust and drenched in a sauce that made it taste almost braised. One couldn't resist, hence I found myself waiting in the crowded kopitiam last weekend to get another dosage of sin... 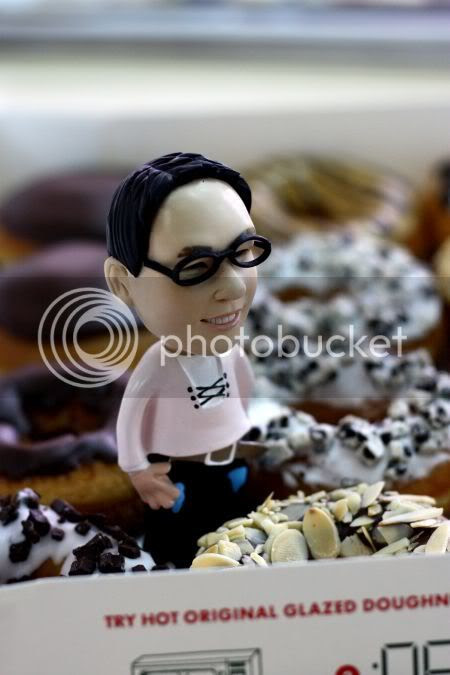 Frat dived straight into the pool of ultra-sweet Krispy Kreme...utter bliss
The wait is excruciating here...very long and drawn out (about 30-45 minutes) as the couple go through their long list of orders (she keeps it all written down so you can't say you were here first!). What was more worrying was how the char siu kept dissapearing from the stall.....making me so worried I'll end up having none. 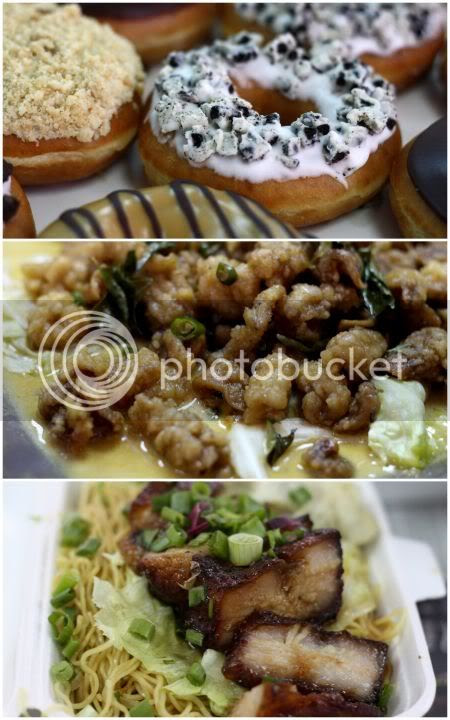 Luckily patience was rewarded and I finally got my order. Seems to be the norm here to order both noodles - the curry wantan mee and the dried wantan noodles as everyone seemed to be tucking heartily in their noodles. The curry broth here is definitely very unusual - diluted with coconut milk but very aromatic from the curry paste they make themselves (no curry powder says the auntie at the stall!). Laden with goodies - char siu, cockles (ask for them as an extra!), longbeans, bean sprouts, taufu pok, mint leaves the bowl is so slurplicious, you find yourself eating it all. What's also interesting is they use wantan noodles - a thicker and softer version compared to the ones used in the char siu wantan noodles. Seems this version has less alkaline water in it, hence it is smoother. 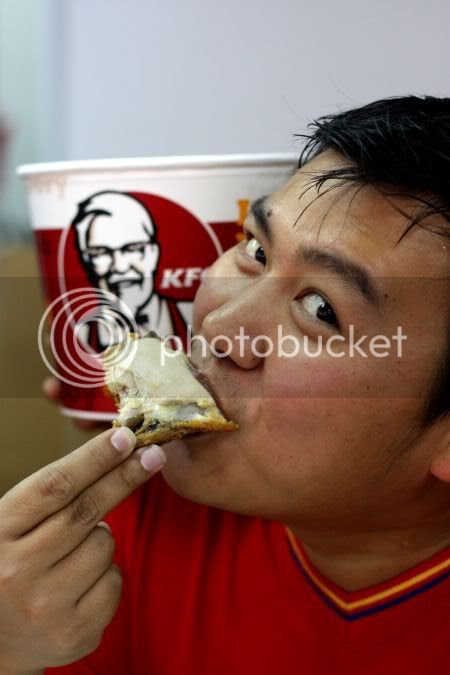 I reckon this is KFC's new top model...introducing Mr. Cheong from All of My Days

The char siu here may not be as fantastic compared to my earlier try at Chowtut but it is still very good and tender, just not as blackened as I like it to be. Usually wantan noodles always seem to lack something, here the stall has gotten it all right - 1. beautiful char siu, 2. springy noodles, 3. large wantans aromatic with the dried sole powder. Thumbs up to this stall, as it's going to be my favourite stopover from now on. More pictures in the Flickr set.
Last but not least, I thought I'll share with all of you, the last C of the weekend...aka Mr. Cuteness that we picked up a few weeks back. I finally got to see the stray kitten we found, after it finished a stint at the vet to cure its flu. Looking all adorable, fluffy and playful, the lucky fella has 2 new friends to play with and it seems a home to go to. Awww, don't you love happy endings! For more pictures of the kitten, see the flickr set.
747 (SFS) Kopitiam
Jln PJU 1/3C
Sunway Mas

(Non halal. Located at the corner shop, near Seremban Favourites.)

Others who have also blogged about this:

interesting concept. but in the Klang Valley only? aiya, tot can sit home and order liddat.

Tried 747 over the weekend. Great food. Too bad I was unlucky to have a portion of char siu that had about 50% gristle in it. The rest was scrumptious though!

what a good combo of food..its gonna b hard if you dont have a group of drivers to drive in all directions

What a fantastic spread!! And a great idea too... must have a bunch of people equally committed to bringing their portion of the feast to the table, and time trips precisely so everyone can dig in at the same time... Hmm, this is giving me ideas...

Ooooh my oooh my... just looking at the photos is giving me a high again. Pity you couldn't join us at Sid's for the post eating party :P

So you're all up for Chowtut 3 - Bonus round (Penang edition) right? heheheh.

Great having you there Boo. See you soon.

j2kfm - set up yr own in Ipoh. Definitely easier since most of the makan places are within one area rite?

Hazza - sorry, I missed you on Sat. Wanted to work instead hence I went earlier to get my char siu dose. I guess you went pretty late hence the gristle. In fact I noticed that the nicer parts were when we tapaued vs the ones she served in the stall probably because it was so late!

Joe - it's all abt organisation I guess.

550ml - oooh, u shld do this in yr office. Guaranteed to boost morales for all.

Frat - thxs for inviting. Yeah, one had to work till 9pm hence no drinks at Sid's (sniff).

aiyyoh either im seeing things or Mr Cheong's chicken looks like it has butter cream on top of it! i fear.. i may be losing my mind. ahem.. :P

chowtut, charsiew and cutey there are the perfect pick me up to a boring mon! cheers boo:)

Sad to be miss this.
My, the noodles (thicker softer version) like u said, is just the type I dig! weirdly, I dun quite fancy the thinner strands. Muz go ASAP to try.

OMG everything looked so fantastically delicious!

What a spread! I am not too sure which is my favourite anymore.

Frat - LOL, I am sure u did. Ooh, we must intro dear old Frat to the momiji gals. Am sure he wants a few Jap girlfriends on the tow.

babe - it was a lot of food, I just nibbled on bits as I was so stuffed.

c&c - hahaha, must be the power of him hence it looks so good.

nomadgourmand - ah, then u will like this place but the wait is very long. Best to come early I reckon or else u get the not so great parts of the char siu.

worldwindows - yeah, after a while I also got so confused on what to eat since my tummy could only eat so much.

It was nice meeting you and having you there. You guys are fun people! =)See you in chowtut 3!

OMG! I'm drooling here....I guess I need to visit Malaysia one day, the varieties of food seem to be fantastic!

Where was the curry mee from har? Mr. Cute, apt name for such a little darling :)

What a fantastic spread!

and yes i am drooling at that char siu. damn. really kenot come kay poh-ing here when you're trying to go on a diet!!