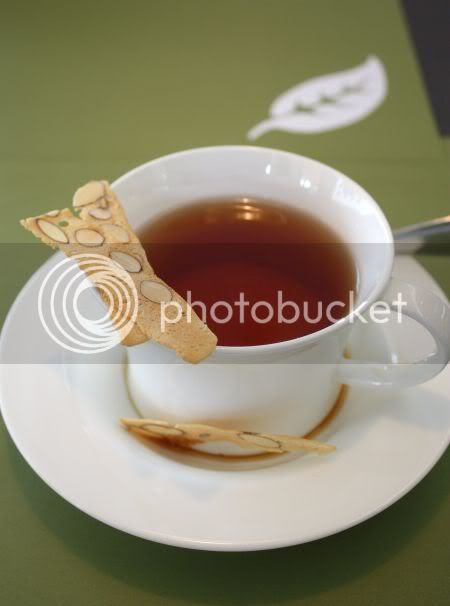 earl grey tea with wafer thin biscotti
One day, on a lazy dazy Sunday, we stumbled upon this small cafe, just round the corner from Yut Kee, Jalan Dang Wangi. Tucked very much in the corner, the place was in total contrast to Jalan Dang Wangi's old shophouses - all modern but somewhat cosy since it was quite tiny. However on that day, it was closed even though it looked tantalising ready. We peeked through glass windows and loved what we saw - nice comfy white leather booths, mirrors with writing from friends, a long dark wood bar, an outside kitchen and etc. Even the name was fascinating - Pink Sage, which we found out later referred to a wildflower. I got on the 3G network straight away to google about the place, but sadly I found nothing at all about it on the Net. 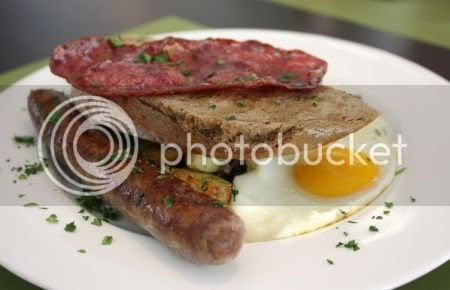 stacked breakfast (RM14.50) - simply awesome stuff, we will be back for more! (The pix looks nicer if it is bigger, see my Flickr account instead for the full size version)
Hence we slowly waited, and waited......I even swung by a few times but there didn't seem to be much activity. Then I spied a mention in last month's Klue magazine about it. It sounded open and so inviting. However, being supercautious, I call on a Sunday but no open picks up the phone. Did the magazine get their opening hours wrong??? Anyway, last week, we took a chance. 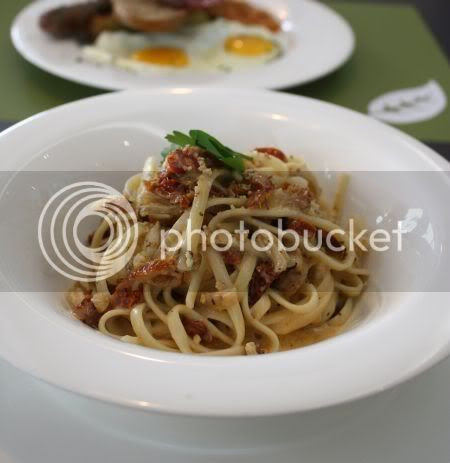 roast chicken and sundried tomatoes linguini (RM17)
I'm glad we did, as we were pleasantly surprised. It had been a stressful day - no breakfast or lunch yet in our tummies even though it was already late, hence we were famished. We got a chance to redeem our breakfast - they were serving brekkie until 4pm since it was the weekends. The weekend special sounded good, with all the works including fruits but since we had to share that, we decided to go for one brekkie and one lunch item. 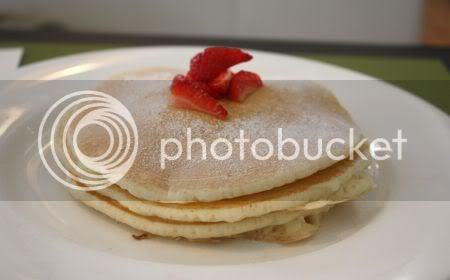 pancakes - fluffy and yummy (RM8.50)
Splashie Boy chose the Stacked Breakfast - eggs done sunny side up, beef sausage (or a choice of free range chicken sausage), rye bread, baked beans, mushrooms and something known as beef streaky. We totally loved the sausage - not easy to get good pork free versions in town but this one came close to the real thing. Juicy and well seasoned, it was excellent stuff. I liked the beef streaky, a crisp piece of beef that we kept eating up like bacon. Not as fragrant as the real stuff but much better compared to that limp stuff they call beef bacon. Needless to say, Splashie Boy polished up the food quickly.
My lunchtime item was pasta - a not too big portion (but just right) of linguini tossed in a slightly creamy sauce with sundried tomatoes and roast chicken. Not overly rich, it was pretty good too. For dessert, we went for the stack of pancakes, something I was eyeing for breakfast. Nice and fluffy pancakes, which we ate drizzled with Heinz Breakfast Syrup. They also gave a very sweet blueberry syrup (I think), but I preferred the less sweet Breakfast syrup. There's something about pancakes that always reminds me of good old days in Chicago, where you can get great pancakes at the pancake houses there.
On the way out, I spied some Magic Bars (RM4), which I grabbed one. No pictures as I was too busy eating it. Scrumptious stuff - a cross between Snickers and I reckon Bounty minus the chocolate coating, as it had peanuts, coconut, chocolate chips and breadcrumbs. A bit pricey though as it's quite small but after each heavenly mouthful, I didn't really care. I reckon, we'll be coming back for more, especially breakfast and maybe that free range chicken sausage.
By the way, no more posts for this week, I'm off for work up North again. Sigh, being on the road will not be fun but I do hope we get lucky with the eats this time round.
The Pink Sage Pantry
Ground Floor
Wisma RA
No. 12, Jalan Dang Wangi
Kuala Lumpur
Tel: 03 - 2693 6000
(Pork Free. For details on how to get here, click on the website. Open from 8am to 7pm. Closed on Mondays.)
*Disclaimer: The opinions expressed here is entirely based on my personal tastebuds and may vary for others. The reviewer also declares that she has not received any monetary or non-monetary compensation from the restaurant for writing this review.
Tagged with: Pink Sage+ Pancakes
Other reviews:
Posted by boo_licious at 12:07 AM

Nice discovery! Sounds like my style of cafe. If only more outlets like this would open in PJ area...

Yes Jackson .... I think we all do. But few can capture the essence of the deliciousness in words like our dear Boolicious can.

oh yum.. that stack breakfast is a good idea.

ooh, must try must try.

such whacky menu terms. and close of mondays...i notice quite a few closed on mondays :(.

ps.i hope you dont mind me linking ur page to my humble blog.just started.do come and visit :)

It seemed like Jalan Dang Wangi area has many nice food outlets popping up. I think I ought to make a list of all the nice food around Kl/Selangor area when I pop in next.

i'm already trying to slot this in this week! :P

can only have such luxury on a sat/sun morning..its too hectic to go through all the traffic on weekdays morning

Anywhere with pan cakes is good. But why can't i see the pictures?

I'll say the Stacked breakfast is value breakfast at RM 14.50. Better go try soon before they raise the price.