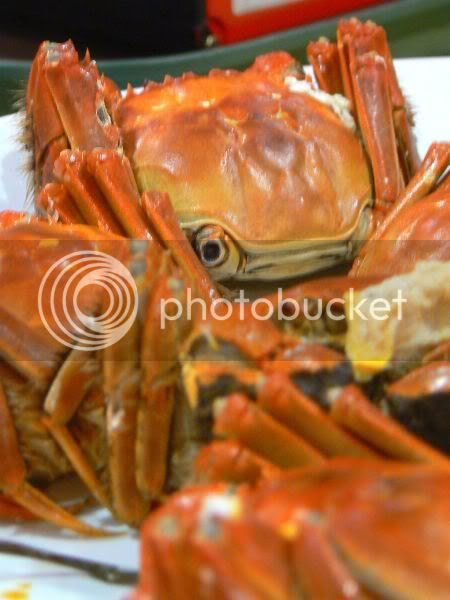 Meet Hairy! I met him for the first time last Friday. A jet setter, he flies in from China every week. A real popular dude, he gets swamped with fans especially during the months from October to January. I met two cousins that day - one from Tai Woo Lake (RM78++ per crab) and the other from the famous Yang Cheng Lake (RM88++ per crab). 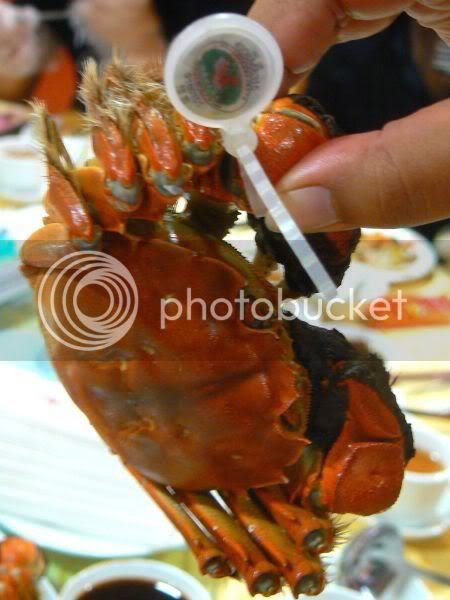 Hairy Crab from Yang Cheng Lake
The fella from Yang Cheng Lake even came with a tag with a number on it. Seems if you want to check if it originates from that lake, you can sms the number in China and they will reply you. See those hairy arms - that is what distinguishes Hairy from the other crustaceans. 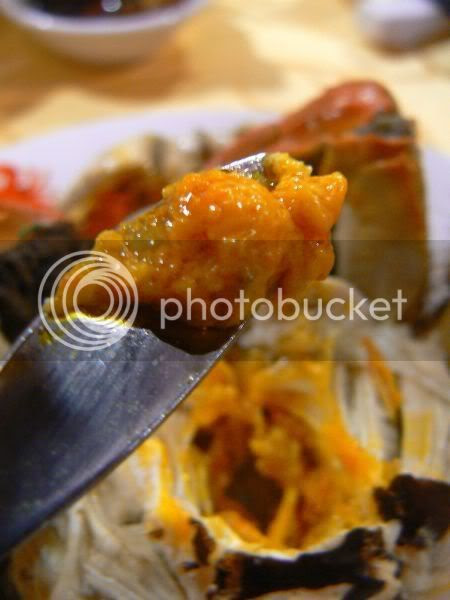 The mother lode of crab roe
There are loads of must dos and don'ts when you meet Hairy but whatever it is, he has a hidden lode of one of the yummiest and oh so heavenly! crab roe under his crabby exterior. The meat is so sweet that you'll end up sitting there savouring every bite. Since I used my fingers instead of the plastic gloves they gave, I could smell the sweet aroma even after I washed my hands. 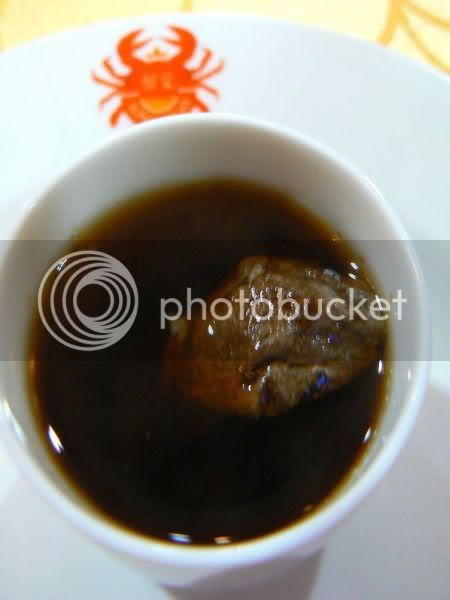 Fa Tiu Wine with Sour Plum
Hairy is such a special fella that one must follow all kinds of rules like, steaming him with Zhisu leaf and ginger to enjoy the sweet meat. Fa Tiu chinese wine is also a must with Hairy and since he leaves a cooling effect on people, drink warm ginger tea after that to balance back the coolness. For me the Yang Cheng Lake fella was sweeter and I felt the roe was thicker and richer. Some of my other dining companions felt there was not much difference between the two crabs. 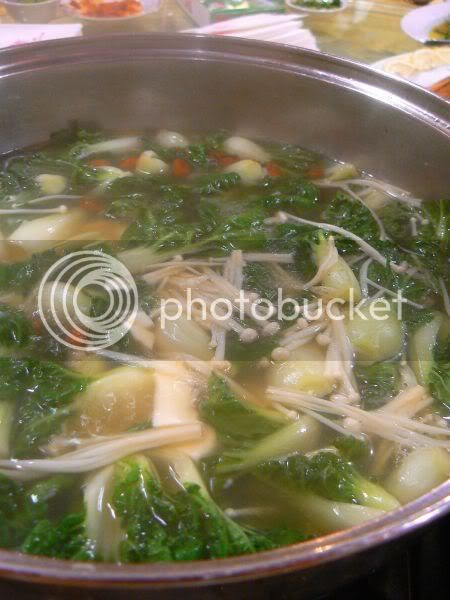 Hotpot of Vegetables, Enoki Mushrooms, Tofu and Wolfberries
To balance out all that cholestrol laden food, we had some vegetables, enoki mushrooms, wolfberries and tofu cubes cooked in a hotpot. It is actually intended for the lobster below but we ended up just eating it alone which was also good as I liked the clear soup. We also had a watercress dish which I didn't snap a picture of it. 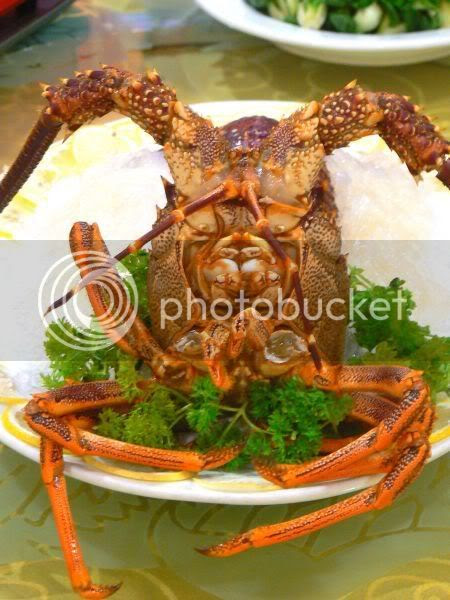 Dare u to eat me?
Do u dare mess with this fella? Poor chap, he came all the way from Australia and we ate him up instead. 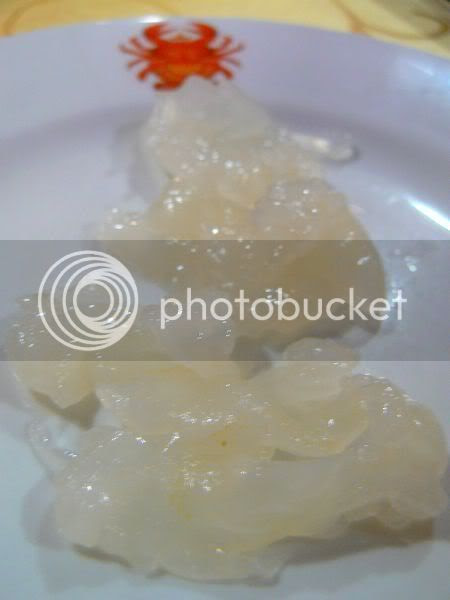 Lobster Sashimi
It got sliced up as sashimi (RM447++). Kinda firm tasting, this was eaten with a bit of wasabi and soy sauce. 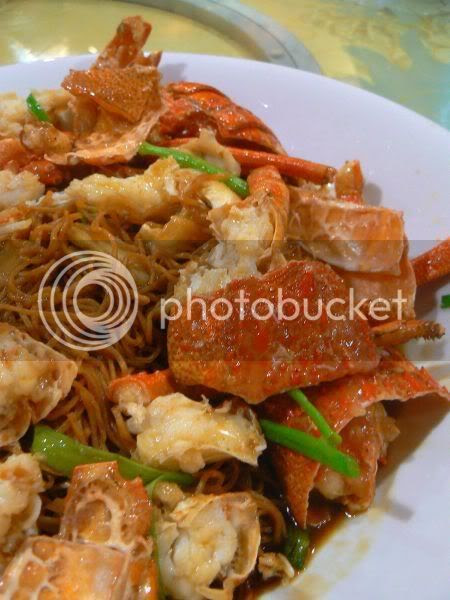 Lobster Head Noodles
Then the head was chopped up and braised with noodles (RM25++) to give it flavour. Not as strong tasting compared to the Water Prawn Noodles but it was nevertheless pretty good stuff. 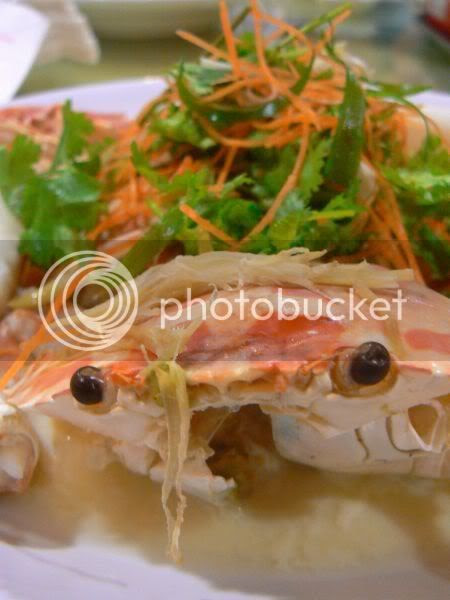 Steamed Flower Crab
More crabs but this time it is the humble Flower Crab steamed with egg white (RM67.50++). Really good stuff and one of the best flower crabs I have tasted. I liked how the meat came out in chunks which made it so easy to eat. 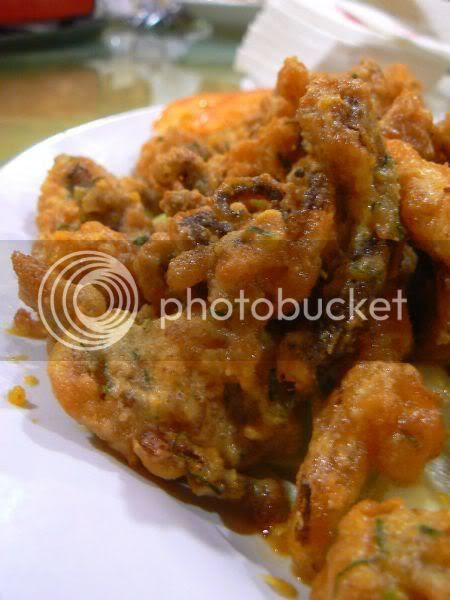 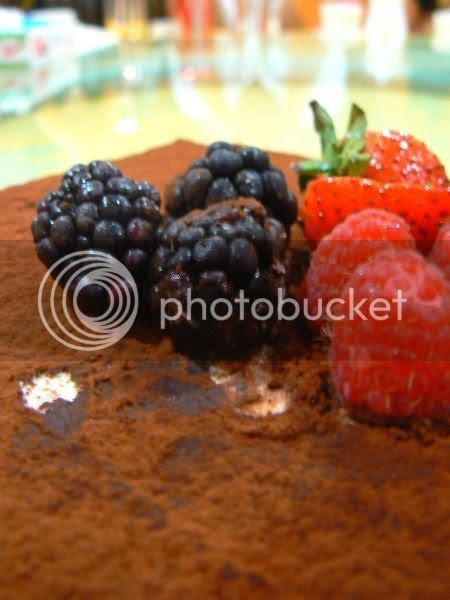 Yummy and Light Director's Cut Tiramisu
We even had yummy dessert - special Director's Cut Tiramisu topped with juicy black berries, strawberries, cape gooseberries and kiwi fruits. The cake was so nice and light, we all finished it quickly with little effort even though we were full from the meal.
It was an extremely satisifying meal even though it did take up almost the whole night and the company was even better! I don't think I will be meeting Hairy this year but I'll definitely look forward to seeing him next year when it is the season.
King Crab
No. 103 - 107
Jalan SS25/2
Taman Mewah Jaya
Petaling Jaya
Tel No: 03 - 7808 2388
(Non Halal. King Crab is having a Hairy Crab promotion until January 2008. Prices start from RM38 onwards and if you buy 5 crabs, you get one free.)
*Disclaimer: The opinions expressed here is entirely based on my personal tastebuds and may vary for others. The reviewer also declares that she has not received any monetary or non-monetary compensation from the restaurant for writing this review.
Tagged with: Hairy Crab + Lobster
Posted by boo_licious at 12:00 AM

i wan hairy!! hairy hairy come to me!

Yumzz...the roes...so good. I think I need a dose before the season ends.

lobster sashimi !! it had been a very long time since i last had tat... :(

Cool, such a lovely dinner, must be expensive. Must try hose hairy crabs!

i think i need to wait for next year too, haha..if not i think can OD..

director's cut? sounds interesting...bet it tastes good with all those fruits..nice

i'm beyond envy liao.. speechless by all those crabs!

When you get this do email me at joanna@maxnetic.net.

precious pea - I think I had enuf already!

ling239 - yeah, same here. Nice to have it once in a blue moon so it remains special.

Sin Tai Lim - thxs for the info. Bit busy though so must explore that another day.

BBO - once in a while ok this kind of food as the cholestrol level is crazy!

Nic - it was yum. More like the Jap version with the light taste.

Christy - I guess Hairy is not everyone's cup of tea but the lobster sashimi is good stuff.

joanna- thxs for the msg. Will reply by email.

lobster sashimis!! wow.. have not tried that before.
What a nice meal u guys had! ;P Drooling over those dishes. :)

It was definitely a very "enriching" experience! :o)

wat i can do now is drooling over the pics here. i wan hairy crabby!!!