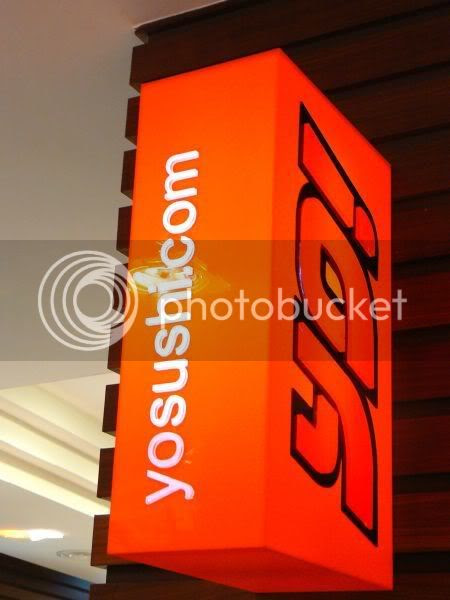 This weekend we decided to step into Yo! Sushi, the latest import from the British shores to our country. Serving kaiten sushi or sushi on a conveyor belt, I had read not "too hot" reviews from several blogs about this place. General consensus seems to be - "too pricey" especially when compared to local established kaiten sushi places such as Sushi King, Sakae Sushi and Sushi Zanmai. 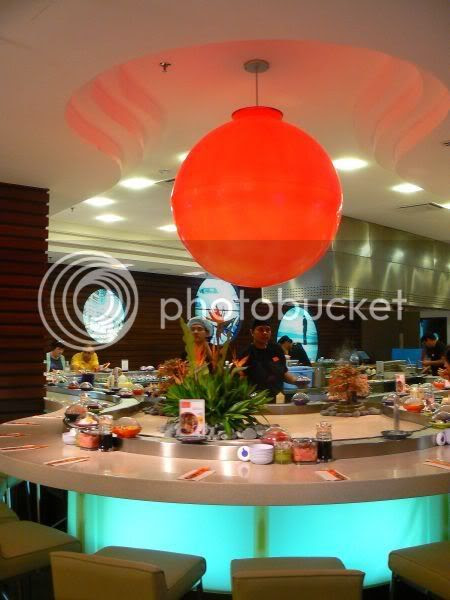 Yo! Sushi Interior
Yo! Sushi's concept kinda reminds me of Wagamama which never did make it to our shores but was instead copied all over town in several noodle spin offs. In the UK, it has built a brand for themselves with outlets everywhere and even a cookbook to their name. The cookbook is available at the local book stores hence it will be interesting to see how they create these dishes. 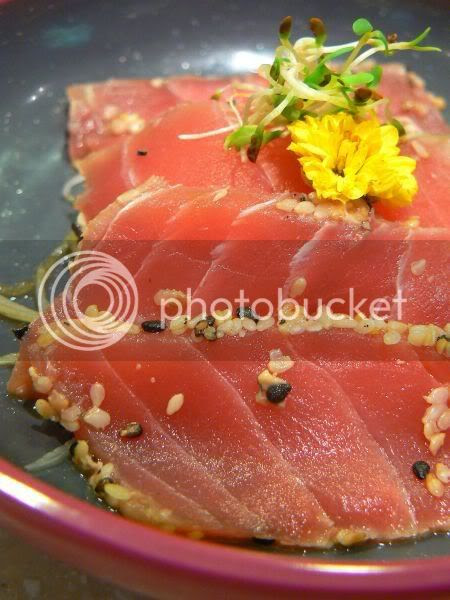 Tuna Tataki (RM14)
Once you sit down on the comfy and cream leather high chairs, you're given a small plastic binder which holds the key to their menu. Like other kaiten places, they use colour codes to identify how much is each plate. The price range starts from lime green which is RM3 to grey at a whopping RM16 per plate. Flick through the binder and you will find their menu divided into ramens, salads, futomakis, sashimi, nigiri, hand rolls and etc. 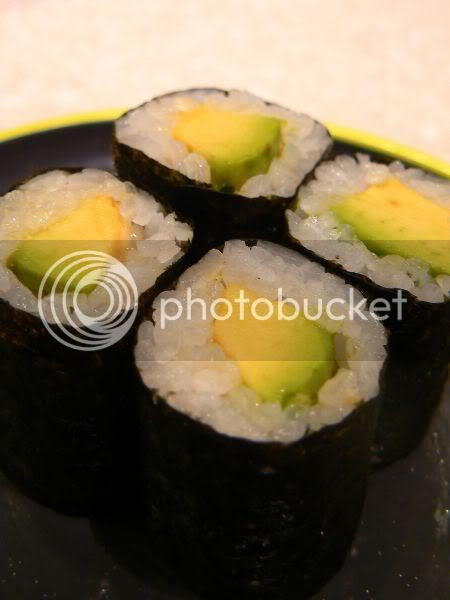 Avocado Maki (RM3)
We started out slowly - taking the cheapest item like the Avocado Maki. Similar to the plain makis served in the other kaiten places, we liked the Avocado version as it was nice and creamy. Thumbs up for this and we even had seconds. There are other types of this maki made with the interesting red peppers, cucumber, salmon and etc. 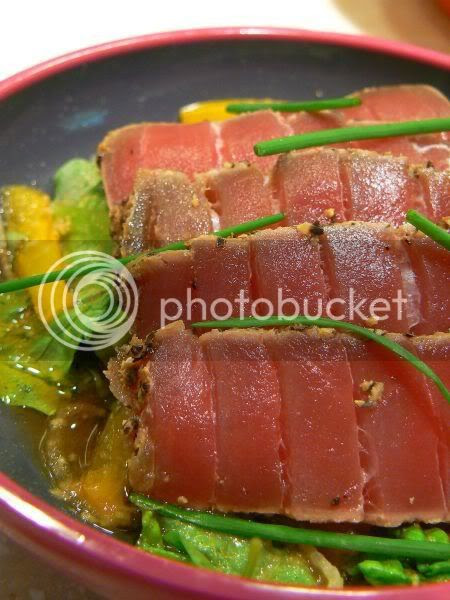 Crunchy Tuna Salad (RM14)
We got bolder and bolder as we took each plate off the kaiten. There were lots of unusual varieties. Instead of just plain sashimi slices topping sushi, they had seared the raw fish or embedded them with a sprinkle of sesame seeds. 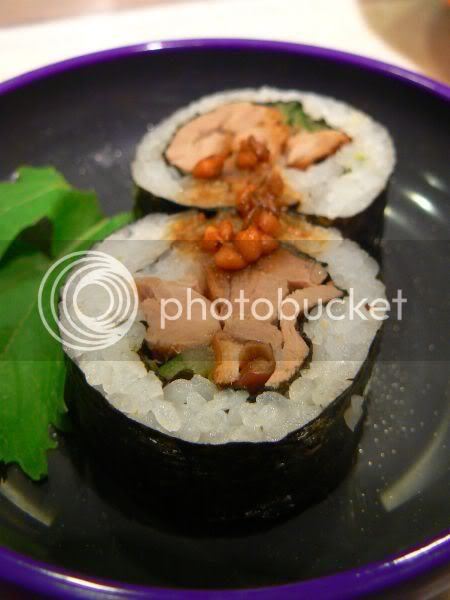 The Tuna Tataki was yummy stuff that we even ordered the salad version - Crunchy Tuna Salad. I liked the citrus soy sauce served with the Tuna Tataki. The crunchy vegetables - lettuce and yellow peppers went well with the tuna tataki slices for the salad. 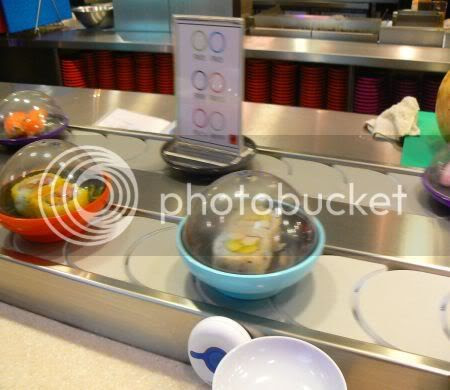 In between eating plates of sushi, we will stop and stare at the kaiten belt which was two rows hence it had a higher volume of plates zipping past us. One of Yo! Sushi's policy is they don't keep items on the belt for more than 2 hours. Seems they use a system whereby they'll mark what time the sushi should be removed - for instance if there is "4" marked on top, this means the item must be removed by 4pm. There's also call buttons at the side of the belt for you to get the wait staff's attention. 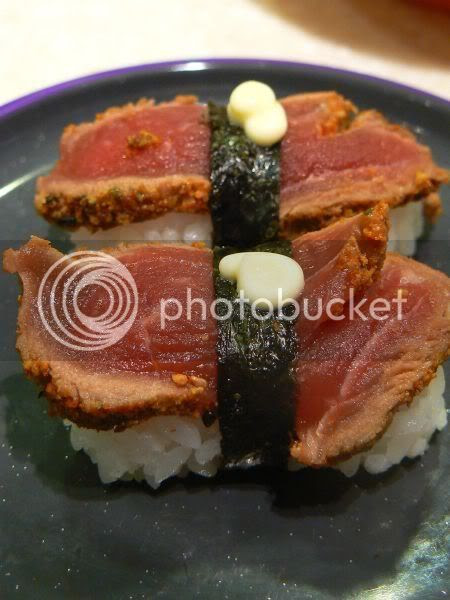 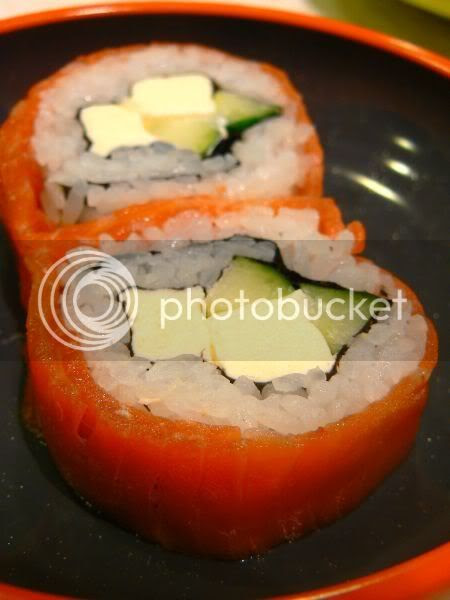 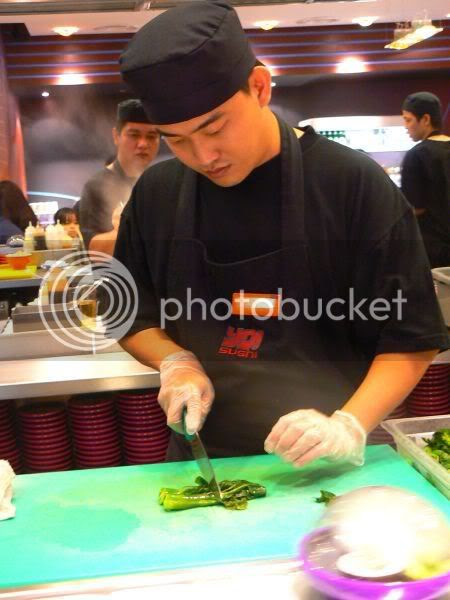 Preparing the salad
Operating in an open kitchen concept, you get to see a hive of activity from your seat. We had fellas cutting fruits and salad items in front of us. In the middle, they were frying rice and preparing handrolls. 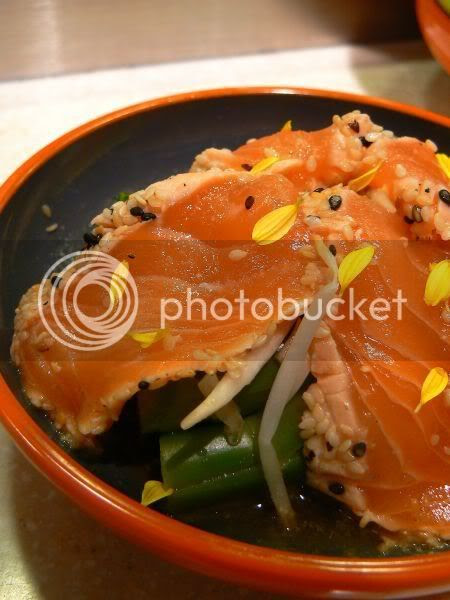 Sesame Salmon Salad (RM10)
We were into salads that day hence the second pick was sesame salmon slices which topped blanched Chinese Brocolli and bean sprouts. Drizzled with a sesame dressing, we didn't think the flavours were outstanding. 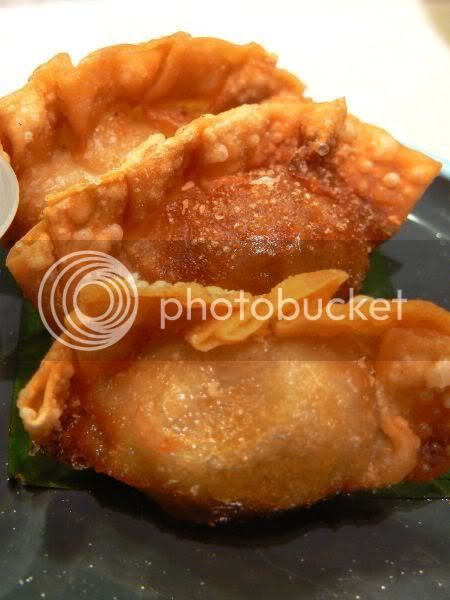 Vegetable Gyoza (RM5)
We were keen to try the gyoza which had 3 varieties - vegetable, prawns and chicken. Just to sample the fried dumplings, we chose the vegetable variety. Unfortunately, we didn't quite like it as the filling wasn't too substantial. A soy vinegar sauce was also served on the side as a dip. 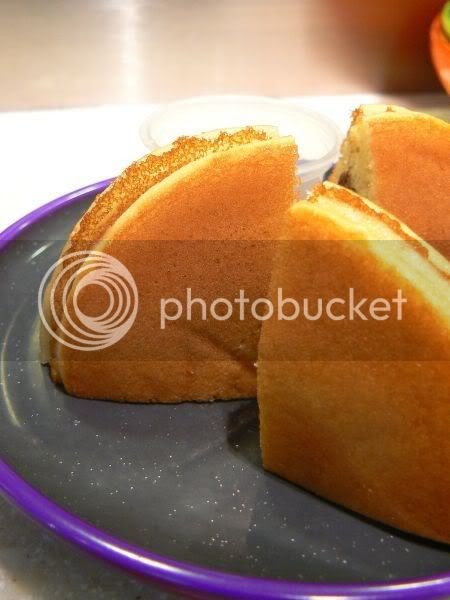 They had less desserts here compared to the spread in London hence we chose the Dorayaki - pancake stuffed with red bean paste. Other sweet items on the kaiten were mochi, green tea ice cream and fruit salad. 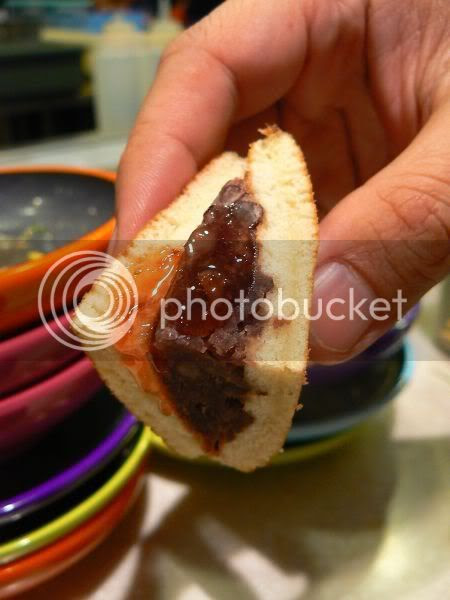 Dorayaki with Strawberry Sauce
It was served with a strawberry sauce which tasted good with the red bean stuffed pancake. Didn't quite like the red bean paste though as it was quite tasteless.

Overall we thought the food was pretty good. However there are some misses with the gyoza and the dorayaki. Prices are definitely steep versus the local kaiten places but here they don't scrimp on ingredients - it is a mouthful versus minute portions in other places. They don't also serve the usual varieties like the kaiten places and have a number of interesting combinations. Definitely a must if you have an adventurous palate. There will also be another outlet at the Gardens due to open in December 2007. For further details on the menu items and the company, click this LINK to their UK website.

Yo! Sushi
Lot 1.18A.01
Level 1
Pavilion
Jalan Bukit Bintang
Kuala Lumpur
Tel No: 03 - 2148 8588
(Pork Free)
*Disclaimer: The opinions expressed here is entirely based on my personal tastebuds and may vary for others. The reviewer also declares that she has not received any monetary or non-monetary compensation from the restaurant for writing this review.
Tagged with: Japanese Food + Pavilion
Other Reviews:
Posted by boo_licious at 12:00 AM

i've had yo sushi in london a few times. and i can honestly say it's one of the worst sushi joints in london. not worth eating there. lots of other independant joints which are better value for money and taste. wonder if they'll sort their food out over here.

but funky indeed it is..

I think it would be a perfect place for a quick bite. Pricey but like you said, quality and variety seems better.

I'm not sure what the fuss was about regarding Wagamama too.. I tried the branch over in Perth and was really disappointed by the quality of food. Perhaps it is just that branch..

Yo-Sushi certainly sounds a little more up-market than other sushi places but i do like the idea of them marking the plates and removing them after 2 hrs on the belt.

I was there a couple of weeks ago on a weeknight. I must say I left less than impressed. The price is much higher than what's on offer out there. Though is a global name, but the outlet does not have the same "feel" with the others I've tried. For the money I spent, I would pay a little more for Kampachi up on the top floor.

Joe - bit difficult to compare with Kampachi since concept here is different?

precious pea - yeah this one is a more non-traditional place. Will be interesting to see how they fare at the Gardens when they have so many Japanese places to contend with.

Daphne - I kinda liked how the wait staff knew the info too as compared to those who usually have no idea.

wanderlust - I do agree with you that the prices here are definitely the highest in terms of kaiten food in town but I thought it wasn't fair for me to compare them with Kampachi since they serve a different range. Seems more appropriate to compare Kampachi with other Japanese restaurants.

I think YO! Sushi bring in a new concept into Malaysia. I like the non-traditional sushi combination which actually quite nice in somehow. The price is a little bit high but the portion are big. I do feel that their ingredients are fresh enough compare to some of the OLD brand sushi shop.

christy - I didn't like the red bean part though. Quite dry without the sauce.

Mamabok - ah, if you come over no problems.

Chenboon - hmmm, I kinda feel the same way. A slight difference vs the other old stuff we get but there is no denying it is pricey though.

wah- the presentation looks so good and yummy...will definitely go and try...escpecially the tuna tataki...
was it packed during weekends?

Hi there! Just wanna say that Wagamama WAS here in KL. They were located at this place near Beach Club, at the building where they have Coffee Bean, can't remember what's that place called. I was there. But it was errrmmm... prolly 10 years ago :)

Oh yeah, Yo! Sushi is a bit pricey and the portion is pretty small.

cakemaniac - we had it on late Sunday and it wasn't that packed. Hope u like it. Maybe try a few pieces and if not yr taste then leave for somewhere else as everyone has been bashing this place.

Angel - heard that place was a "fake" one as that was not part of the chain. I still remember how fast it closed or changed its name becoz of complaints.

i concur with amita - the menu is the same sans pork, and crappy stuff, but probably hoping to appeal to the expats who are familiar with their name.

and yes i agree with daphne too - wagamama sucks!