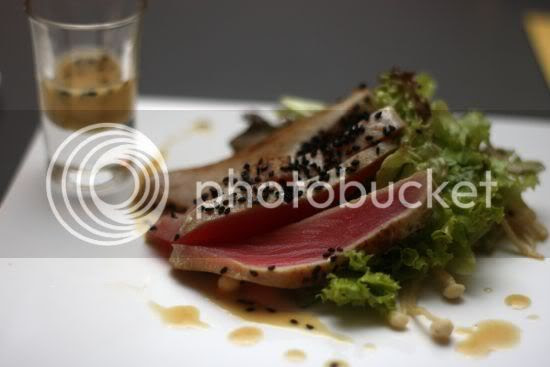 It's nice to stumble on surprises....kinda like discovering a forgotten Xmas present or a wad of cash you forgot you had stashed away for safekeeping. Last Saturday night, we both felt like kids discovering a hidden treasure as we spied the words "F" from afar as we walked towards Bangsar Village. To set the picture correctly, we were both arguing as usual on what to eat since both of us was tired from a road trip far far away (but that's another story)....he wanted his usual comfort food aka Country Farm Organics while I was batting for Mizu Bangsar since it served my all-time favourite Japanese food. "What's this?" we both chorus when we spied people and lights on top of Chawan....is that a new eatery, we both echo. Throwing wind to the caution, we pushed through the frosted glass doors and discovered wonderland.... 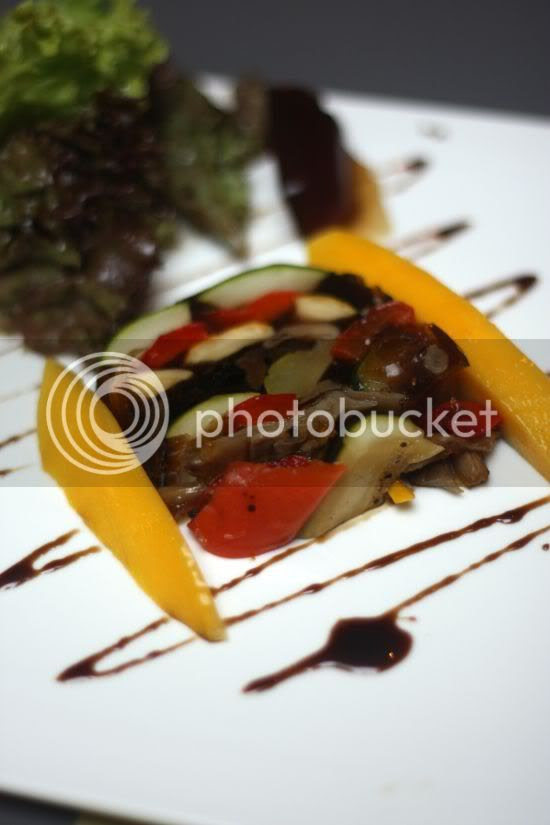 
It had only started business on Friday night but the place was bursting with happy people and sizzling from the open cooking stations. Luckily tables were available and with a warning by the friendly waitress that the wait may be long since they just started out, we waited in anticipation. The menu is simple, just a few items penned on a piece of paper while the drinks list is handwritten in a book that looked like my old school notebook. 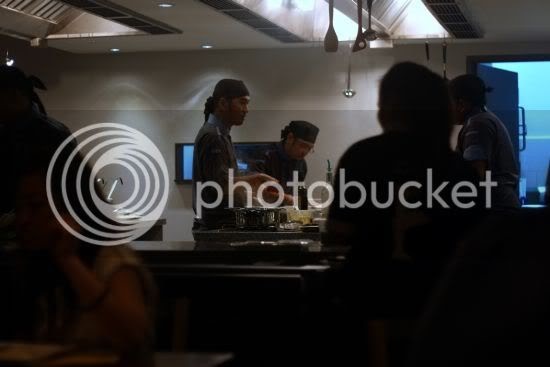 
Service is a little crazy but the wait staff are all friendly and helpful. It's a little noisy with the bar next to us (we could hear the clunking of their non stop juicer whirring away) but it's bearable. Instead I'll put it down to atmosphere - the warm sizzling sounds of the open cooking stations (that reminded me of being in a party or even my own home) and the happy chatter of people waiting for their food. 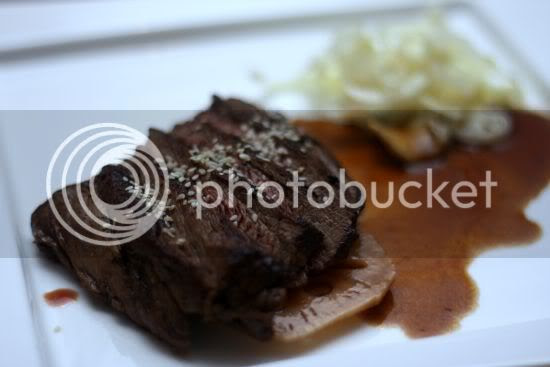 
Expectations were marked down since new eateries often need some time to "warm up" as the people learn how to work with each other. I was rather impressed with what we were served. First, it was a simple amuse bouche of couscous with an olive. Nice tart appetizer to whet the tummy juices for our appetizers. The menu is a mix of Western with a touch of Japanese as the Edwin Yau from Changkat Bukit Bintang's Daikanyama has a hand in it too. 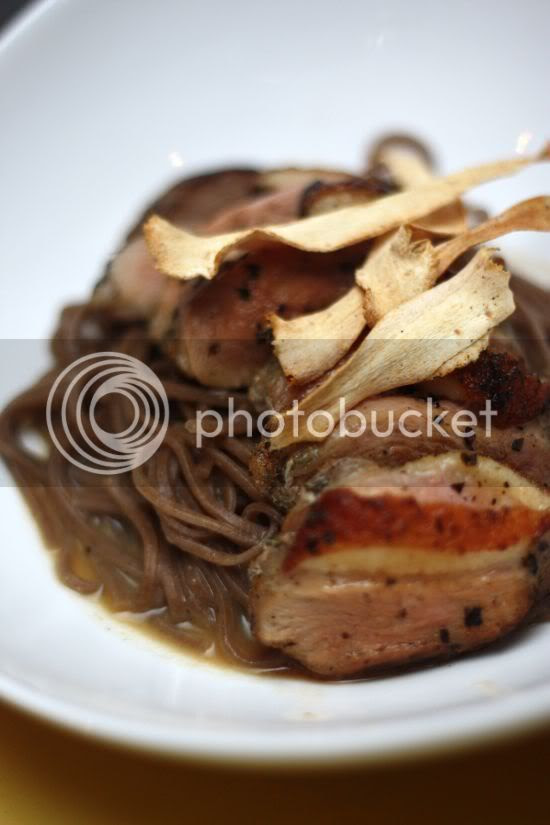 Splashie Boy insisted on the vegetable terrine with porcini jelly (RM18) and he loved the mix of vegetables encased in the jelly. I was hankering for Japanese hence my choices all had a Japanese slant like the pan seared tuna with miso mustard sauce (RM15). The sauce was a little weak but I enjoyed it with my fresh tuna, lettuce and enoki mushrooms. 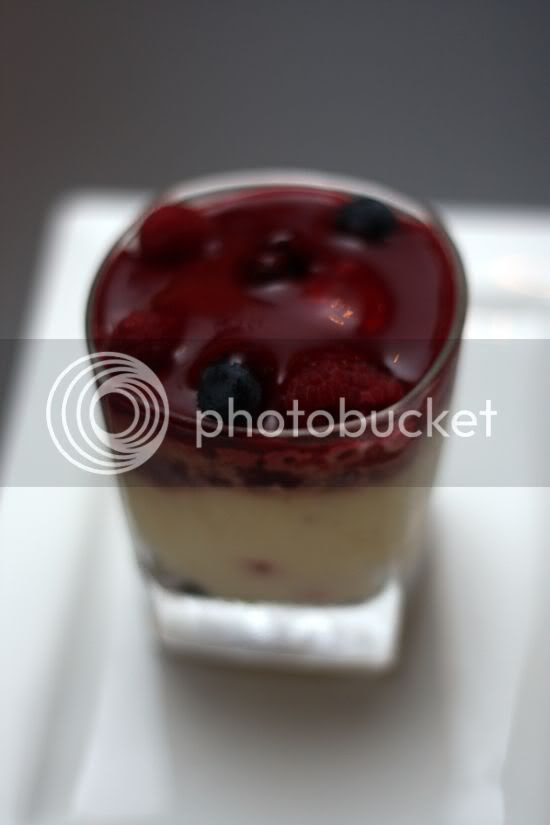 
Our mains came quickly after that, my generously topped duck soba (RM25) and his sesame steak with a fennel salad (RM35). I enjoyed the sauce tossed with my soba noodles making each strand slurplicious while the duck was meaty and tender. Splashie Boy enjoyed his steak that was fork tender. So unlike another meat place in Solaris Mont Kiara that served us bloody steak (obviously someone forgot to rest it!). 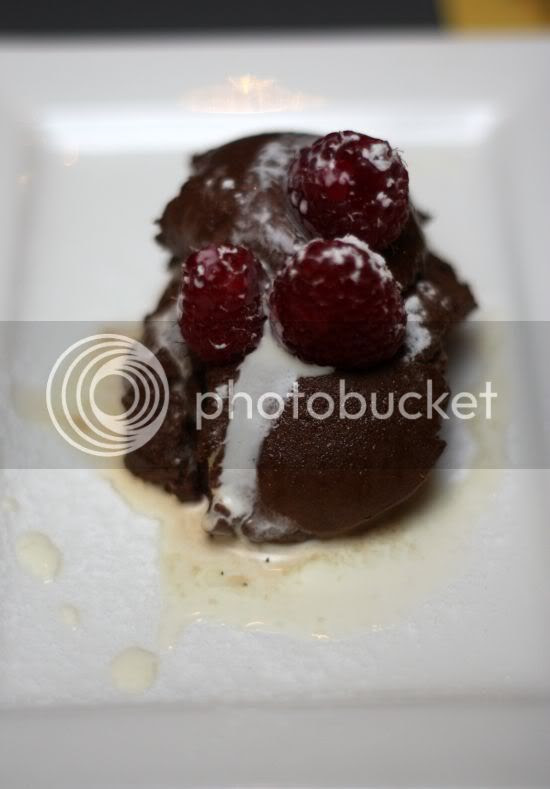 
What I liked about this place was the portions are just nice as we had room for dessert. We ordered the recommended ones: the dessert of the day (RM10) which they told us had meringue and the dark chocolate espresso mousse. We had some mix up with our order but once it was spotted, they quickly addressed our complains. We didn't know what to expect with our dessert of the day but it tasted good since it wasn't too sweet with the tangy layer of fruits. Not much meringue taste though and later we found out it was an Eton Mess (i.e. crushed meringues with fruits). I also enjoyed the rich taste of the dark chocolate mousse (RM12) topped with fresh raspberries.


Overall it was an above expectations meal under the circumstances they had just opened their doors on Friday! We'll definitely be back for more. At the moment, they're only open for dinnertime but hopefully once things run smoothly, they hope to open for lunch. There'll be cooking classes held in the kitchen in the near future. As it is rather too new  and things will always be in the flux for sometime, expectations should always be low for this place until things run smoothly after some time.


(Pork Free. Closed on Mondays. Open for lunch and dinner. Place is on top of Chawan Kopitiam and faces Bangsar Village. Note that the kitchen uses induction cookers. Join their Facebook group for more information. More pictures can be found in the Flickr set.)


The Life of Brian

always like stopping by your blog.. you seem to find all the good food... haha..

Tummy Rumble - a coincidence for this place. Hope you'll enjoy it but bear with it since they just started.

I love the look of the dark chocolate mousse! DId they mention which chocolate did they use?

This place is no. 3 on my to-do list this week (after Brotzeit and The Hill), now that I'm back from vacation! It was still covered with construction material when I left last month :D heard good things about their risotto from someone else who was also there last weekend ... and I lurrrrrrve risotto! :D

=) Mr A and i tried a different selection. thought the tomato/seafood soup was good (it's actually glorified tom yam).

somehow, duck soba, hmm, we didn't exactly enjoy it, the serving given to us was really tiny!

tried the chicken teriyaki with risotto, which was.....really quite weird. love the presentation of food though =)


portions for our table were really small, so were were still hungry and went for the wagyu steak (they serve the cheeks i think?), i thought it was a bit too tender for my liking...

i'd go back for the soup =) and the concept, perhaps i need to try what u tried! =) hehe

Stumbled upon a nice place to dine whilst arguing on where to eat :P what a day huh??
From ur description, the place seems small and sdn bhd tables :) will time my trip there wisely... normally before lunch hour just to grab myself a nice seat

Either u have a very good camera or ur a very talented photographer because ur pics positively made my mouth water! man... im hungry!!

Can I come over to your place cos I'd like to look for that wad of cash?! lol... Been staring at this place for the past few months. Must go visit. That is one very neat eton mess.

I love the symphony of sounds a restaurant produces. It's a sign of life and energy. And that for me makes an exhilarating meal.

F seems like a nice place to try out those duck soba and eton mess! :)

Michelle - it tasted like good chocolate since it had an aroma vs those el cheapo ones but no mention abt the brand.

Sean - oooh, I saw them cooking the risotto and it looked good. I was very tempted to give that a try.

Au&Target - it was yummy just as good as the roast chikkun Au loves so much.

Jade - hmmm, different opinion is always good as hopefully they will improve. Duck soba wasn't too big a portion but decent enough for me to fill me up. Wow, you had a lot for 2 people.

Leo - yeah, but I like the whole concept. The tables and chairs are also quite nifty, saw in one blog that they even built in special handbag stands.

Thxs for the nice compliments Coffee Girl. I just point and shoot so it must be the camera.

Paprika - LOL, sorry all wads of cash has been discovered. I know I had one Singapore dollars one the other day. yeah, it wasn't very messy enough.

qwazymonkey - this place is atmosphere and food which is a great combo. Hope you will like it too.

I was wondering the "Buffalo" in the name is related to the Taiwanese cookware?? hehe

babe_kl - yes it is the same Buffalo, as they'll be using their cookware in the kitchen and also doing demo classes with it.

I enjoyed reading your blog ~ thanks for posting such useful content./Nice article and great photos. Very nicely done!

I am Tung Wei, the guy that runs F concept dining by Buffalo Kitchens. Thank you very much for all your support, as we are still a new restaurant and we appreciate your patience and comments as it will only make sure a better place :)

We have recently and will also next week be adding a few new dishes into our 'small' menu, and have also started our affordable set lunches.
hope to see you guys here again!

boo_licious: Thank you very much for your wonderful review, i hope you dont mind me posting it on our facebook page :)

Went there with a group of friends last week but was very disappointed with the food. We each had a starter and main. The salad starters were average with lacklustre dressing.

For my main, I was looking at the lamb dish. I was quite suprised when the wait staff said they served local lamb? I'm not an expert but are there any sheeps raised in Malaysia? or is this a case of mutton dressed as lamb. Anyway I opted for the chicken which was quite bland and soggy, considered it was meant to be a schnitzel.

My partner ordered spaghettini cooked 'kung poh' style, which was extremely salty. We hate seeing food go to waste, but it was unfortunate that we just could not finish our meals.

At approx RM100 per head, I doubt I would go back there again.

Yesterday went to check out this place. Ordered Pan Seared Tuna Salad, Pan Seared Baramundi and Squid Ink Linguine. Overall is not bad. The fish was nice and Squid Ink also the same but I feel a bit spicy.

Environment wise is nice too. Think will come again for more.

The menu might seem limited but what Buffalo offers, it has got right. The two-way crab and seared tuna salad are a good way to start your meal, while the steaks and pastas as mains are impressive.
________________
buffalo kitchens