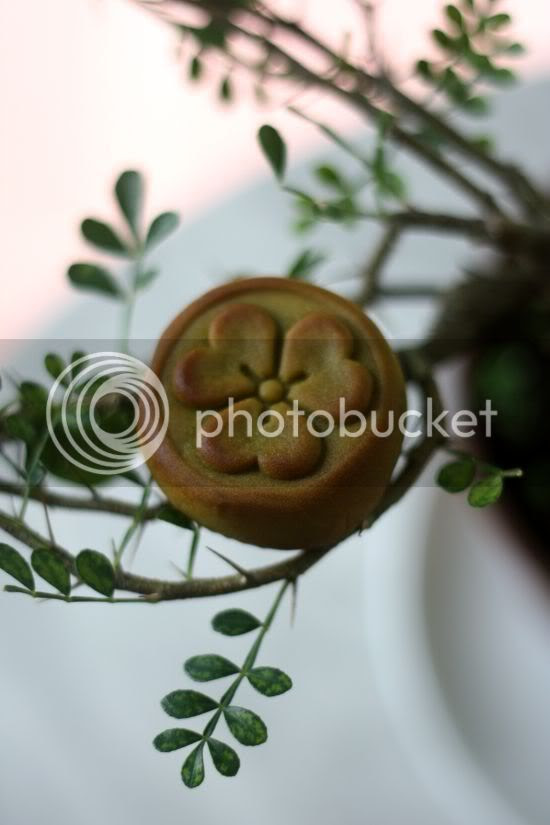 brown rice green tea mooncake
Recently, I was asked by Mrs. Jeanie Lee from New Formosa Restaurant whether I would review some Taiwanese mooncakes she is selling at her restaurant for charity. Since it was for a good cause, I agreed to sample some of their specialties. I was a little curious to also sample Taiwanese mooncakes and compare to our local ones to see their difference. 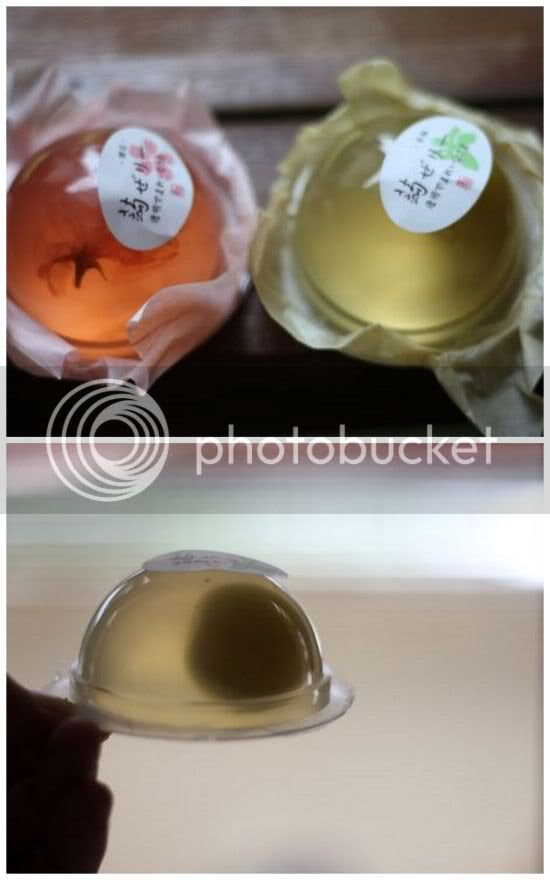 agar konjac jelly in sour plum and sakura flavours
In terms of looks, the Taiwanese mooncakes wins hands down as they all come in dainty little shapes that make them look so pretty and enticing. The mooncakes are packed in boxes with a mix of different types. There are 4 types to select from such as : 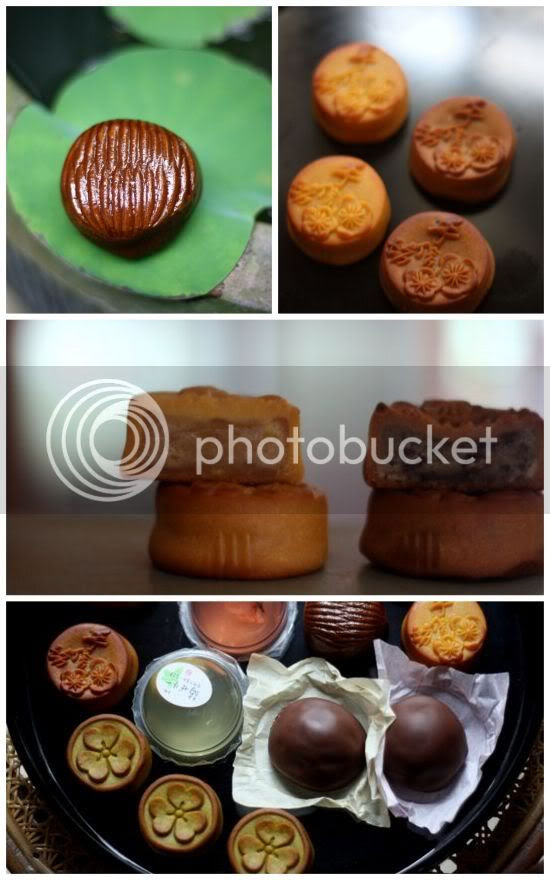 red bean chestnut mooncake, black bean kelp and Japanese sweet potato mooncakes, sliced, the whole selection of mooncakes
The one I obtained was the Emperor Mooncake collection. The baked mooncakes were adorable especially the green tea one which had a lovely flower embossed on top of it. In terms of taste, I did find the flavours very subtle and not very distinct. However, each mooncake seems to be less sweet tasting compared to our local ones. I also felt that it was a little on the drier side as I prefer my mooncakes with a wee bit more oil. 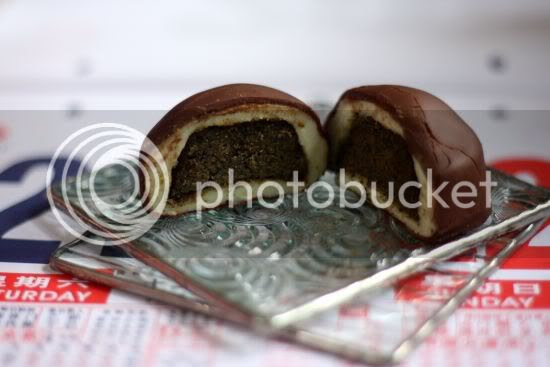 chocolate covered mochi with black sesame filling
The chocolate covered mochis were very interesting (no idea what chocolate they used but it must be some compound as it didn't melt!) with the abundant sesame and peanut fillings. I fell in love with the adorable transculent jellies that had a sour plum and a pretty pink sakura flower suspended within. Both tasted great as they were slightly tangy (especially the sour plum one) and I wish there were more. They come packed in transparent plastic cups with spoons on the side so eating them on the go is no problem. 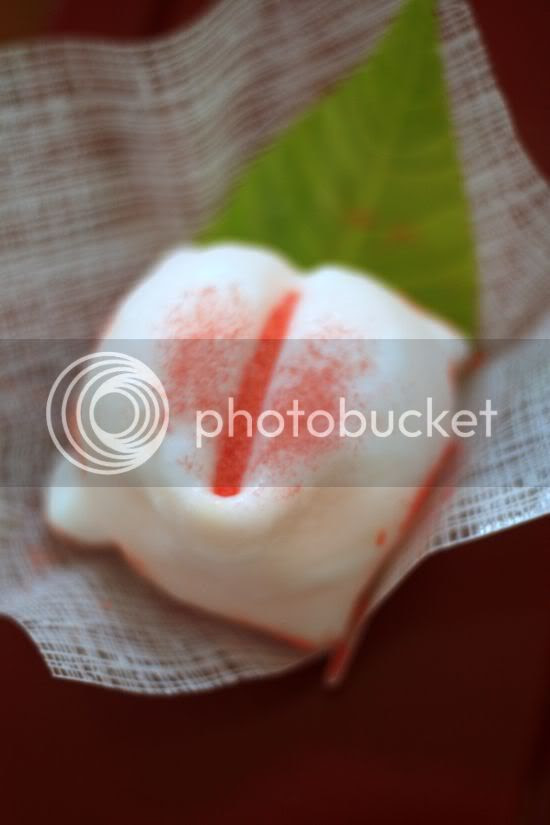 peach shaped daifuku mooncake
Aside from the usual mooncake boxes, Shou Xin Fang also sells these unusual frozen daifuku mooncakes filled with "ice cream". Seems these pretty little things have even caught the eye of our PM's son as he bought a box before (according to Mrs. Lee). A box of six daifuku mooncakes is RM66 with flavours such as: mango and peach, strawberry red bean, green tea red bean, sesame, red bean and chestnut and vanilla chestnut, chocolate and black forest. 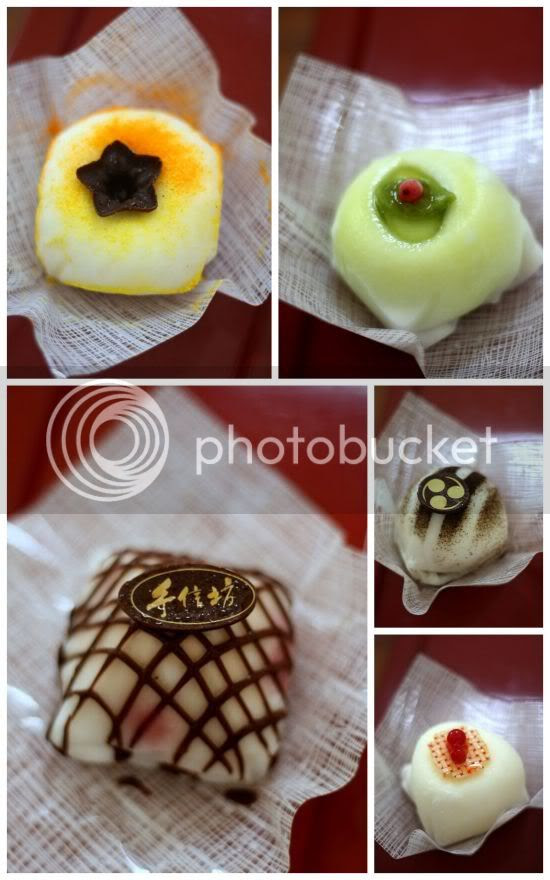 various flavours of the daifuku mooncakes
Each daifuku mooncake is wrapped with a rice flour skin (reminds me a little of our snow skin but less soft) and I reckon it is stuffed with cream (versus ice cream as it's not very creamy) and various flavours. It may look lovely but the flavours weren't very distinct and I felt the cream left an artificial taste to the tongue. When eaten straight from the freezer, you couldn't really taste the chestnut or red bean flavours so leaving it out for a few minutes is advisable.
Aside from these daifuku mooncakes, Shou Xin Fang also sells Dorayaki pancakes, yoghurt mochi mooncakes, mochi truffles and mixed cheese dessert that can be purchased for the Mid-Autumn festival.
New Formosa Restaurant
46 Jalan SS2/24
Petaling Jaya.
Selangor

They look so adorable! I don't think I am able to eat that!

ooohhh, these are pretty~

they all looked too cute to be eaten!

Your Props and Food Styling is impeccable. Love 'em shots! And thanks for sharing about Taiwanese Mooncakes with us.

ps - the shang mooncake didn't last 2 secs. whacked by me and cumi fast fast all :P

I'm always fascinated with Taiwanese cakes or such sweets ever since I got a box of Taiwanese wedding "biscuits". They're so cute and delish to boot too!

ai wei - they make great presents I reckon as they're so pretty.

Life for Beginners - They're so unlike the ones we get that seem so coarse and unrefined.

eiling - Too bad, had to eat them or else can't write abt them.

C&C - the Shang ones are super yummy! Everyone loved them too.

Baby Sumo - they are sweet aren't they. I was ooohing and aahing over them while I was snapping the pixs.

babe_kl - ooh, wedding biscuits wil be nice. My only experience was there bricklike pineapple cakes and that tasted great.

I must say, you are really good in capturing those foodies! There is a kind of "serenity feel" in those photos, esp mooncakes one! Love all your pix to the max!

Audacious, perfectionist, unique, passionate, and visionary, the 5 words are the cessation of Chanel .The archetypal replica Chanel handbags has been accustomed a brownish makeover. Now that you're salivating, this brownish calfskin another to the around-the-clock aboriginal 2.55 bag is accessible alone at chanel cheap new abstraction bazaar on Robertson Boulevard in Los Angeles.

Wow, such adorable mooncakes. Check out my
Singapore Food Blog too!