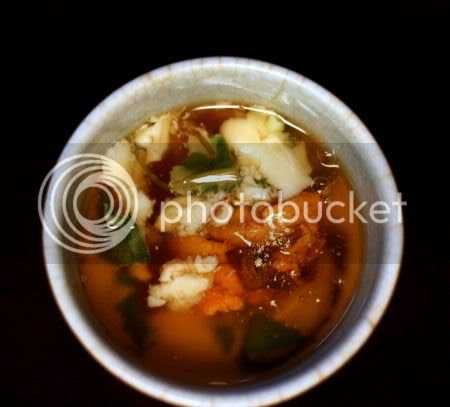 Due to a typical Daniel Powter bad day, I needed something to perk me up! Since I was already in town running an errand for a friend, we decided to try this place - the replacement restaurant for Sushi Dokoro Maeshima at Federal Hotel. 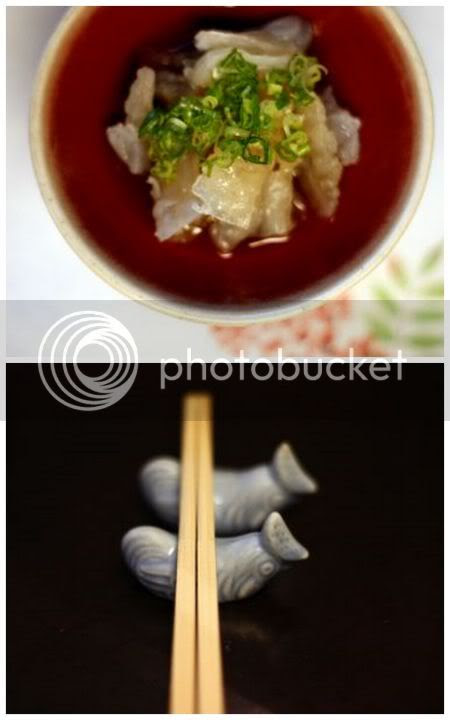 jelly fish and rooster chopstick holders
From what I have heard the owner of Sushi Dokoro Maeshima had to leave town due to an illness and another Japanese chef, Muneharu Tokunaga took over the business. Most things remains the same i.e. the Malay sushi chef behind the counter, the Chinese lady who serves us, the serving of Omakase and the rustic looking dining place with the tatami rooms. There's been some obvious sprucing up, new cushions to sit on, pretty floral sheets for our plates, some new plates used and etc. 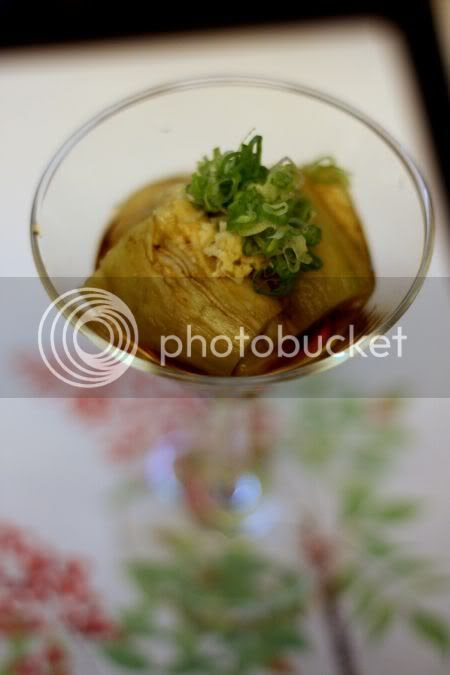 eggplant on a floral paper
Even though it's not the peak time for Omakase, the restaurant is still packed with people when we walk in about eight-tish. A group of men are at the sushi counter obviously on a holiday mood already while some serious Japanese business is discussed next to us. 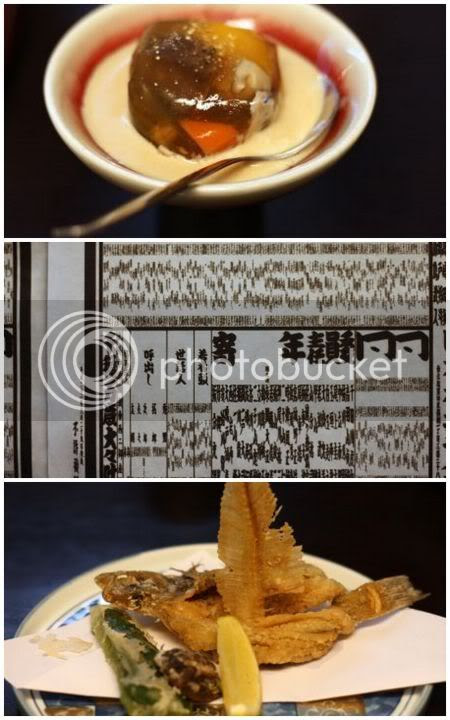 mixed vegetables with sesame sauce, paper with Jap characters line the windows, fried fish
We opted for the omakase (RM250++ per person) but for one person, as Splashie Boy had already eaten enough Japanese for the day (he had a lunch at Zipangu) and half of his tummy was filled with food from a farewell party at his office. 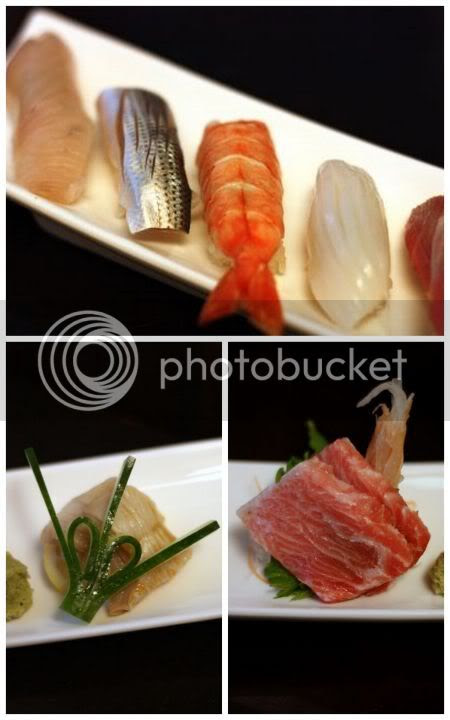 sushi on a platter, toro and akagai
First up, were appetizers of a very crunchy jellyfish in a ponzu soy sauce. Yummy and refreshing. Also served was eggplant - creamy nuggets that melted in the mouth swimming in a soy sauce. Next came the sashimi - the heavily marbled toro, which melted in my mouth. Simply gorgeous. Also in the platter, suzuki (seabass) and a chewy akagai (clam). Next came a big surprise - an unusual chawan mushi as it was cold and topped with a jelly with uni. Yummy stuff and hidden within was a large prawn. We also got served a weird thing - jellied mushrooms and vegetables with a creamy sesame sauce. Definitely an acquired taste. Then, came the tempura platter - lightly dusted with flour, a fish (I think she mentioned kari gei) that they had cut the bones out and also deep fried. Yummy and crunchy with the Japanese pepper on the side. I felt the batter here was lighter than last time. Next it was sushi time - a platter of 8 pieces that included a uni gunkan sushi, a prawn, a tuna one and octopus. I enjoyed the thick cut sushi in between bites of pickled ginger or gari to clear the palate. A miso soup rounded up the savoury section. 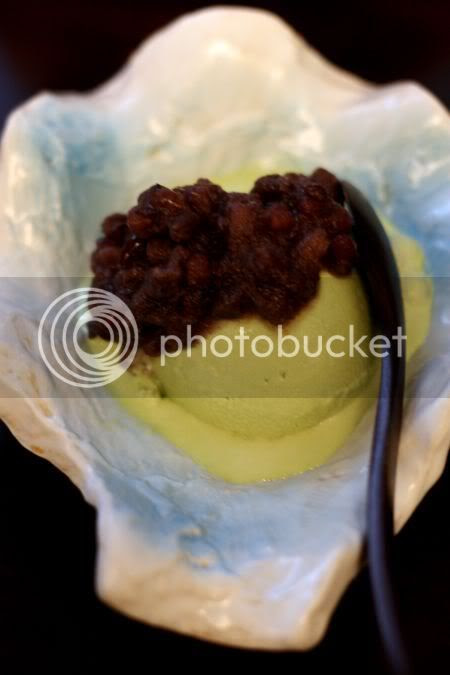 green tea ice cream with red beans
Lastly came the green tea ice cream topped with red bean, their signature dessert. Overall, if I had to compare between both of the places, I preferred Sushi Dokoro Maeshima for its more unusual selection of items given to us. Somehow Sushi Dokoro Maeshima's execution of food was cleaner and seemed to let the produce shine for itself. One cannot fault this new place, as their food is served in a different style. Don't get be wrong, I still think the food is definitely still above par from other Japanese places (thus the high Japanese clientele) and won't mind coming back here but I do miss the old Sushi Dokoro Maeshima that wowed me with simple Japanese dishes like their steamed tai fish head, the unusual whale's tongue, tiny firefly squids and etc.
Kapoh Muneharu
Arcade One Front Entrance
Federal Hotel
No. 35, Jalan Bukit Bintang
Kuala Lumpur
Tel: 03- 2144 6909
(Pork free. Place is opened only from 6-11pm except for Sundays. This Chinese New Year, they are opened throughout the festive season including the Sunday. More pictures can be found in the Flickr set.)
*Disclaimer: The opinions expressed here is entirely based on my personal tastebuds and may vary for others. This review is time sensitive; changes may occur to the place later on that can affect this opinion. The reviewer also declares that she has not received any monetary or non-monetary compensation from this place for writing the review.
Tagged with: Omakase + Japanese food
Posted by boo_licious at 9:00 AM

Oooh! Now I know where to go for Japanese food after wandering around Low Yat. Missed the Old Dokoro Maeshima.

looks like it's worth a visit! the current chef must be pretty proud of the place, since he stamped his name on it. wonder what "kapoh" means. :D
i remember the whale tongue; this was the only place i've ever had that (but i didn't exactly love it). uni chawanmushi sounds interesting though =)

Nooooo...I'll miss Sushi Dokoro Maeshima. :-( Will have to try this place some day. thx boo.

My guardian supports that restaurant ! and Im really surprise that u went here! plz come again and support this restaurant XD

This restaurant MUNEHARU was use to be the one u talking about MAEJIMA but since the chef changed, the restaurant's name changed as well. Both name were taken from their chef's name

Sounds good! Too bad they serve toro instead of otoro. But Still, it's quite a good deal for an omakase, i think. Heading for j-food in sg? :) happy cny, boo!

Just make sure you're getting a genuine lida daidaihua product so you'll reap all the benefits of this super health supplement from the Amazon. slimming capsule are used to encourage quick and successful weight loss. They are prepared using the natural herb slimming capsules , as well known as Ma Huang.