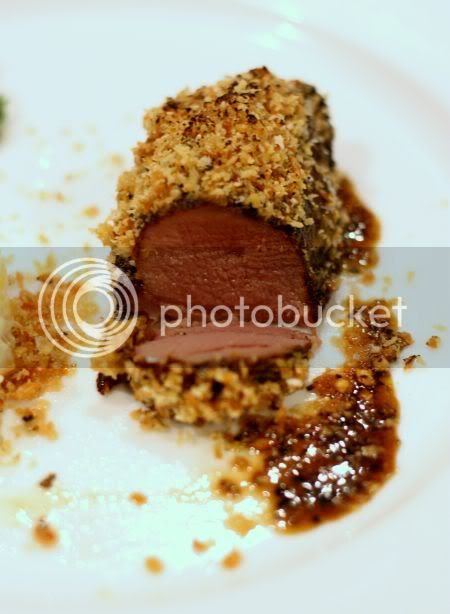 Last week, saw the return of the Crab Queen aka Precious Pea to our beloved shores. Hailing from Down Under which she now calls her second home, it was a day of food celebration a la foodblogger style with loads of yummy food. We started with an early morning nasi lemak rendezvous at her favourite stall in SS2 with WMW, and ended with a scrumptious Chinese dinner at Regal House with Lyrical Lemongrass and the Ravenous Rabbit. 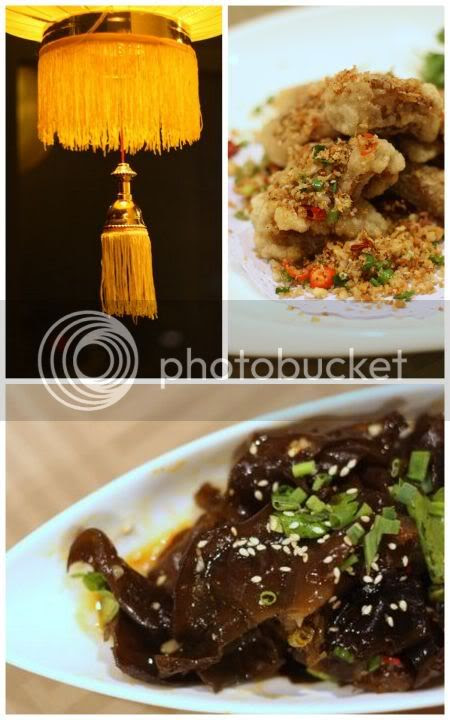 It was such fun to catch up with my "makan kaki" after such a long time. We also had fun exploring and testing out the menu for the newly opened Regal Kitchen that takes over the defunct Hatyai Street Food (may those crunchy pork knuckles we love so much, rest in peace!). 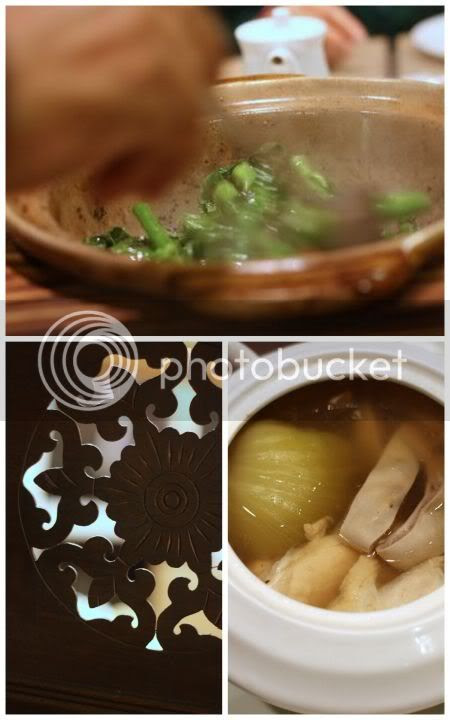 Kicking off the meal, were tangy and tongue tingling starters to whet our appetites for the main meal - a spicy and crunchy wood ear fungus and the deep fried lion fish with salt and pepper. I've always had a penchant for the sweet and delicate flesh of the lion fish - a little seen and super ugly looking specimen with unusual curved bones. These tiny delicacies are usually used in Teochew restaurants (my first time eating it was with loads of soy bean sauce) and the bones are so flexible you can eat the whole fish. 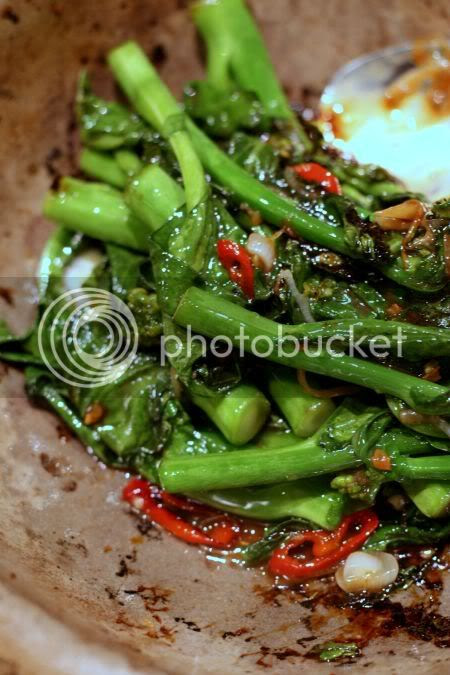 kailan in hot pot
My absolute favourite came next, the smoked duck with a wasabi crust (RM16) - a combination of fork tender meat with a melt-in-the-mouth skin. Pop it in your mouth and little bursts of burning sensations hit your tongue from the wasabi bits. Simply sublime stuff that I wanted more. I didn't quite fancy the fruit salad served on the side, but I guess it was meant to help you cool down your fiery tongue but who wants to get rid of that wonderful tingling sensation. 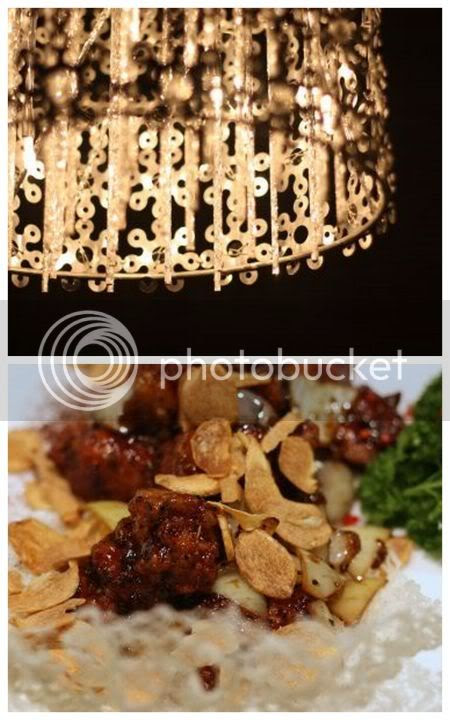 We did cool down our tongues, just slightly with a peppery double boiled ham choy (salted mustard cabbage) soup with pig stomach (RM88 for 6-10 portions). Then it was time to tackle an even more peppery dish - the deep fried spare ribs with black pepper and garlic (RM25). A little salty on its own, the slightly caramelised spare ribs crusted with black pepper niblets is best eaten with a bowl of hot white rice. 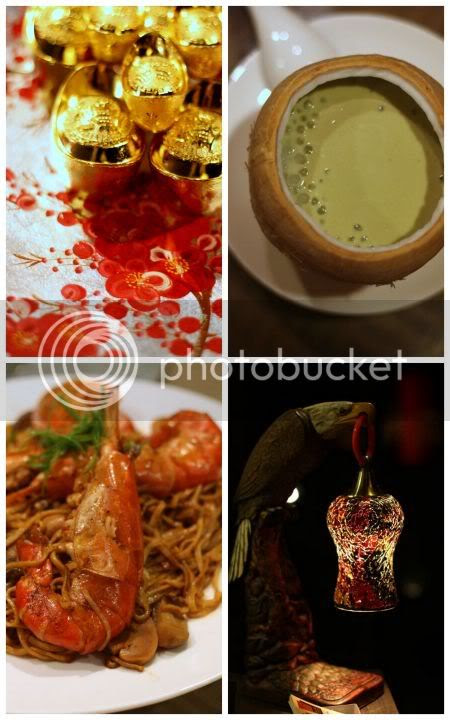 Usually vegetables are kinda forgotten - a must-have to keep us healthy and virtuous in times of indulging so much. I must admit the hot pot kailan in seafood sauce (RM23) had me rethinking that it was so much more than an obligatory dish. Perfectly cooked kailan are tossed in a hot claypot with a salty seafood sauce (more shrimp I reckon), hence you get slightly charred bits that mingle with the salty goodness of the sauce, making you wish for more. We end the main meal with Vietnamese freshwater prawns fried yee mee (RM76) - noodles cooked with large prawns that are so tummy satisfying. 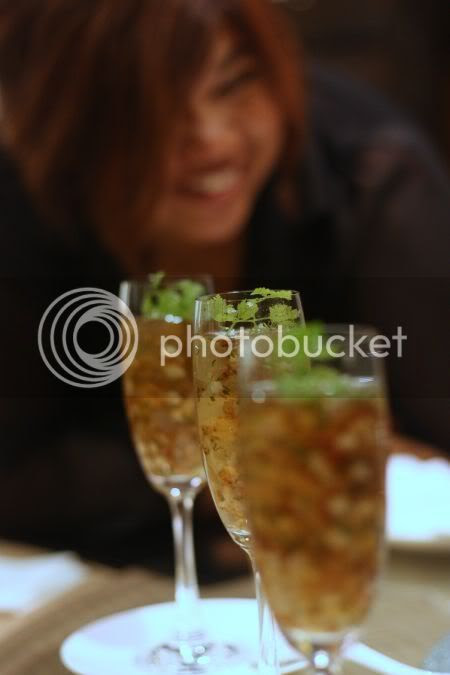 lemongrass galore - Lyrical Lemongrass poses with lemongrass jellies
Last but not least, it was dessert time - the aptly named chilled minty lemongrass flavoured jelly (RM8) served in tall glasses and the seasonally available avocado dessert. I loved the cool taste of lemongrass jelly and this version (think the original is from Sam Leong, as I've seen this dessert in A Wok Through Time) was extremely refreshing and slurpworthy with bits of barley, dried sea olive jelly, bits of mint leaves and water chesnuts. We didn't quite fancy the avocado dessert served in a coconut shell, as the coconut milk smell overpowered the whole dessert. Not a pairing we would advice for them to undertake in the future.
Overall, a very satisfying meal. They're doing their CNY menus at the moment with Yung Kee lap mei (waxed meat) and yee sang of course. For other reviews, see Eat Drink KL.
Regal House
One Bangsar
63E Jalan Ara
Bangsar Baru
Kuala Lumpur
Tel: 03-2283 3116
(Non Halal. Place is open for lunch and dinner. For more pictures, see my Flickr set. The CNY menus need to be booked in advance. They now have a written menu with hot and cold appetizers, double boiled soups, chicken and meat selections. Live seafood is still pending as they have only recently commissioned the aquariums.)
Posted by boo_licious at 12:00 AM

i do hope this place does well. their offerings seem a lot more interesting than bangsar seafood garden's!
was surprised to see hatyai street gone though. it seemed like the kind of place that would thrive...

I would call this designer food! Hope it tastes as amazing as it looks!

saw this on pea's site.. excellent;)

It was fun meeting up with you girls again. Aiii....Melbourne got great food but lack in makan kaki ler..sniff! So when shall we go for crabbing feast?

nicole andres said...
This comment has been removed by the author.
4:24 PM

We'd like to get in touch with you to invite you for a grand opening of a food & beverage outlet. Was hoping you could let me know your email address so that I can contact you directly.

I've also followed you on twitter under the name nicolemohg. You may direct message me if you would like to communicate from there.

I was just starting to dread the onslaught of Chinese dinners until I saw this - this is WHAT new year celebrations should look like!! Hmm... now to try maneuver the office CNY lou sang to take place here...

yes indeed interesting twist of some dishes with decent prices. worth a visit !

Sean - yeah I was shocked to hear of Hatyai's early demise, as I thought their food was good.

Hazza - it was good stuff esp the duck breast. Yums, now my tummy is thinking of it.

katztales - u can bring the visiting brother there? Au did spill the beans abt the "visitor"

nicole - have DM u already.

tng - get Unkaleong to take you here!