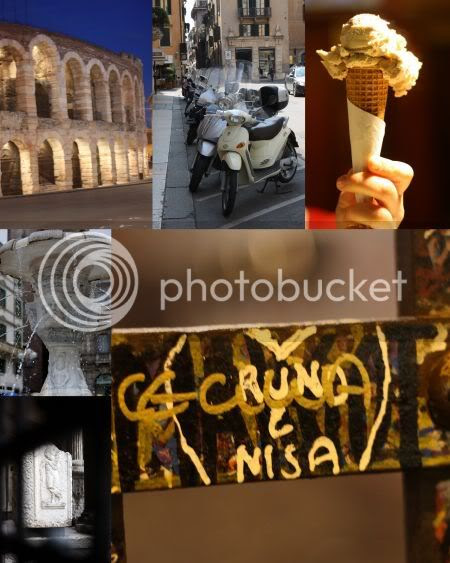 1. Italian cities have a lovely rustic charm to them
There is something so charming about their towns and where I was at i.e. Verona was rustic, even though it got a little damp from the occasional shower. The main focus of the town is the arena, where the opera is held. It looks like a mini Colliseum and whatever time you go, expect a crowd there. Most importantly Verona is known as the city of love as William Shakespeare named it as his setting for Romeo & Juliet. Hence there's Juliet's house (with her statue that everyone insists on touching her breast to get true love!) but weirdly enough, it is full of graffiti and declarations of love. Loads of statues around also with fountains and of course, those vespas that the Italians go around with. Bicycles are also popular hence you see them parked all over town. And while you are wandering down the cobbled streets, indulge in a little creamy gelato. Pistachio was my favourite and I love how you get 2 varieties in a cone, for 2 euro. Every opportunity I had, I gave it a try - even when it was pouring with rain! 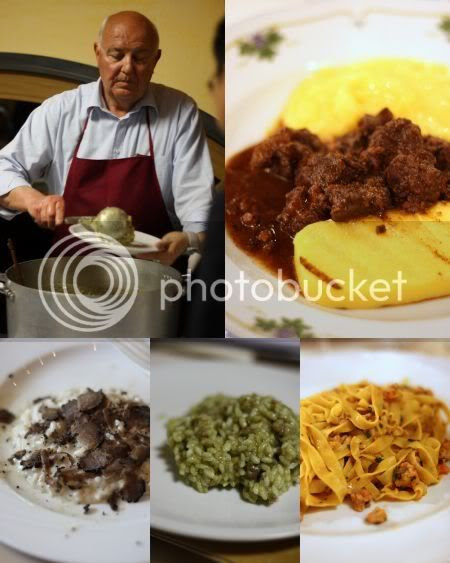 2. Too much risotto and polenta makes an Italian meal dull
Since the trip was for work, I had little say on what meals I had and unfortunately, I found out there was just a little too much carbs for my liking. Italians seem to eat a lot! 4 courses where the appetizer will be cold meats, first course is either pasta or risotto and second course is the main meal followed by dessert, usually a dry cake or a selection of cheeses. I reckon for the first few days, all we had was risotto until I was shuddering whenever I saw a waiter approach with a serving dish of the creamy stuff. The only exception was amazing and creamy risotto we had with indulgent shaved black truffles. That made those carbs go down really well. Am not sure how the Italians keep so slim with all the food they eat. Portion sizes remind me of America as we are always served with laden plates. Aside from risotto, it was polenta that tasted just like baby's food - gloopy and kinda tasteless. Occasionally, we will get fantastic fresh pasta that makes a meal worthwhile. 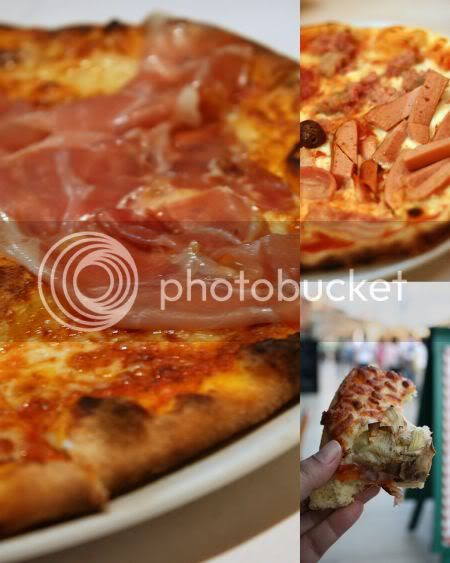 3. Nothing beats the pizza here.

One item I have no complaints about is the pizza. Every place I tried for pizza didn't dissapoint me. Whether it was a thick slab from a touristy spot near the arena (they bake them upon your order) or paper thin pizzas from a restaurant that used to be a church or an out of town trattoria, they have all been impressive. My favourite pizza was one topped with paper thin slices of ham with a creamy truffle centre as an appetizer. Another good thing I noticed is you don't get rubbery mozzarella cheese here. 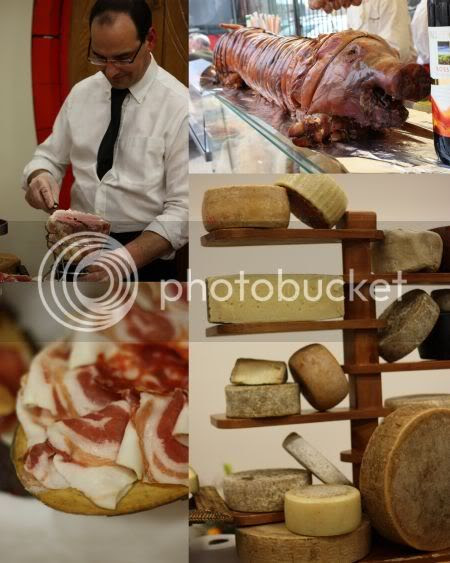 4. If you don't take pork and cheese, please avoid Italy at all costs

Throughout my 2 weeks in Italy, I just realised I didn't eat a single piece of chicken. Instead it was cold meats, beefsteaks, horse meat even (tastes like beef!) and seafood instead. Cold meats, thinly sliced like ham and salami are very popular. We also discovered hot sandwiches filled with caramelised onions, zucchinis, mushrooms and pork slices. A little salty, these hot meals were a welcome change from cold lunches. Aside from prosciutto, they have this very sinful stuff called lardo. It reminds me of jellied pork fat that they place on top of polenta or bread slices. Delish but extremely cholestrol-laden. Cheese is also great here, had a number of fantastic parmesan, wine marinated cheeses, blue cheeses and etc. Usually we eat this with bread and a glass of wine. At the end of the trip, we discovered this great little trattoria where we had a change, a tomato based seafood soup that made our day as it was tasty and hot. Everything from that place was good, whether it was pizza, seafood spaghetti and grilled meats. We must have eaten there almost every night after we discovered that place. 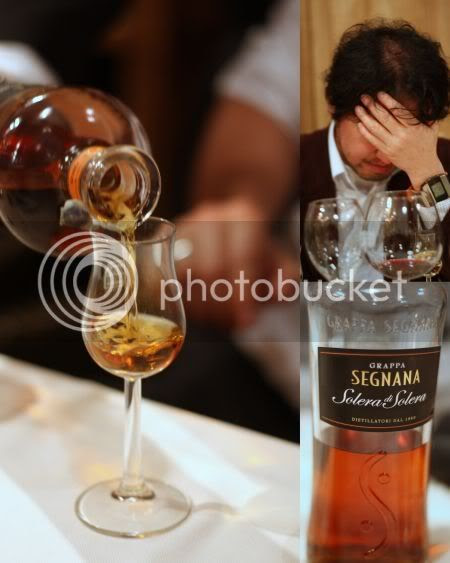 5. Grappa (or a little too much whisky and wine) gets people a little crazy

When in Italy, follow the Italians hence it was non-stop drinking of wine and something a little stronger aka grappa. Not for the weak hearted, you down grappa in one go and it hits straight to your stomach and then your head. The people I was with on the trip developed a taste for this lethal stuff and after a few shots of grappa, it led to crazy stuff like Bruce Lee and Michael Jackson moonwalk imitations. Nevertheless it was damn good fun and I reckon I got over jet lag pretty quickly with all that drinking every night.

6. Friends made over drinks stick together no matter what

Best of all, in Italy, I met a group of crazy Asian people who love to drink and party. No matter what happened during the trip, I reckon we became fast friends and hopefully this means, when I have the time to visit Hong Kong, China, Japan and South Korea, I can count on them to show me around the local foodie haunts and of course, the drinking holes. Like one fella's motto says, "drink till you die"!

Wish to visit Italy soon! We love cheese and pork, haha! But horse sounds a little intimidating! will try it anyway if we happen to visit Italy!

fancy u talking abt larda..bcoz we dropped by at nero deli to take a look and the first thing we saw was a block of larda and asked the lady who in the world and wat in the world would buy this?..she mentioned either eating as it is or flavouring soups..

overload of risotto? hahah perfect for me!

I love pork and pizza!!

I can live without chicken for a couple of days. Hahah! Looks like you had a fantastic trip!

talk about perfect life! i could eat pizza and cured ham all day till it die.. :P

Such a lovely trip!! Lucky you!! Nothing beats good food, good wine and best of all....new friends too! Ahhh....the pizza such a killer and I don't want Pizza Hut for lunch leh..how how?

Not too adventurous in cheese but you got me at pork.

Yeah. Why Italians I met are effortless slim?

Yes, nothing beats the pizza in Italy. I had pizza for the 4 days I was there! =D

I love the Pizza Margherita and Quattro Formaggi! At that time, I didn't now how to appreciate the ham... *sigh*

Yeah... my honeymoon in Italy was a perfect one :) simply love the gelato and their pizza.
one thing that I don't like of Italy is the cleanliness of the cities... Rome, Milan... not as clean as Germany...
But I love the architectures there :)

What wonderful life lessons!Boredom is absolutely not an option while in Italy!

Love this post. Really nicely written and deliciously descriptive. Feels like I'm holding a slice of pizza on one hand, and a glass of grappa on the other. Cheers

sounds like you had a fantastic trip. wish i could go visit one day ;-)

so italy is not suitable for muslims to visit eh? what a pity !!

I thought Italians love seafood too? That's why I was okay there too:)

But I agree, their pizzas were good...some of the places I tried when I was in Italy was so-so, but I've tried some which were really good:)
One of the best/worst I had was in Venice =)

What a lovely post! Makes me want to visit Italy again. I remember how wonderful the food was (but then again, I didn't eat risotto and polenta at every meal; my hosts were nicer). :-) I love your last lesson: Friends made over drinks stick together no matter what. I'd like to think that it is because we're able to let our guard down and allow others to see us for who we really are. I'm glad to see that you've made good friends with this bunch of people. They sound like keepers.

sugar bean - horse meat is a specialty for that area but the rest you can get everywhere.

jesscet - aiks, I only know good morning and thank you in Italian ok? What did you say??

Joe - they have a transculent type and one with just plain white. Both equally sinful. Drats, I should have thrown you all that risotto instead as I must admit, I really got sick of it after a while.

Unkaleong - I didn't realise I didn't eat any chook for 2 weeks until someone pointed it out to me when I was in the airport!

thxs ciki dearie. Hope you're getting the hang of the camera or going to get a new one!

Pea - Pizza Hut just ain't the same...you're so much better off with Papa John's Pizza.

tummythoz - yeah, I wonder what is their secret. The guys are kinda sleazy looking though but the girls definitely score in the looks and style dept.

bangsar-babe - yeah, just eat pizza and it is good enuf.

Jenn - I heard it is not very clean esp if the garbage trucks go on strike! That is when it will stink a mile away.

Thxs Ben for those sweet words. I now feel like having a glass of kick ass grappa and a slice of that truffle and ham pizza.

babe - you can always enter the Heineken contest??? It is to Rome.

souled out - There's seafood also but becoz my meals were all organised, they seem to opt for loads of cold cuts as it is cheaper.

Christy - I think for my trip, it was cheaper to do cold cuts vs seafood but we did eat good seafood on our own.

LL - Lucky you to have nicer hosts as we got laden with the risotto! Yup, I hope we get to keep in touch, seem to be missing some people from facebook though.

gosh, like LL, reading this makes me wanna revisit italy too! i simply adore their large meals..hehe yes, i'll finish the whole course of appetiser, primi, secondi and desserts. and i need to have their gelato's everyday! such sinful pleasures :). did you have time to visit other places or just verona?

sc - nope, no time as we had loads of work in Verona. Too bad, as I would have love to see other parts of Italy.

Yeah !! But did you find that theor carbonara is very much diff than the ones we have here ?????? But I love their pasta and pizza Neoplolitana very much !!!!! Agree with you that their pizza is really nice there