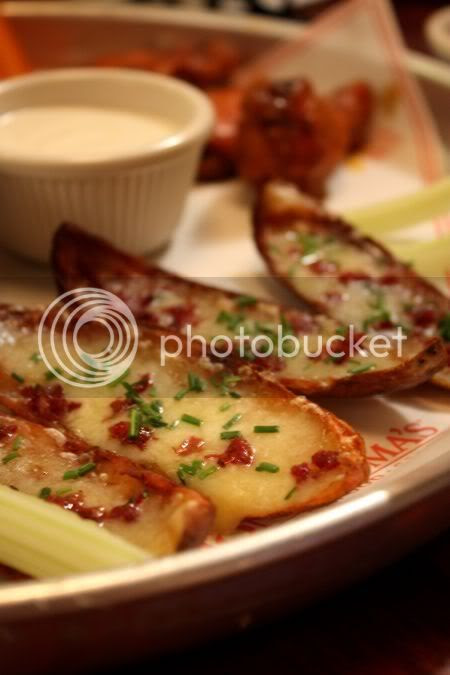 I reckon, everyone's heard a comment or two about this place, since they have opened so many outlets in every major mall in town, so there should be no surprises here. I'm currently clearing my backlog of pictures - things I ate long long ago with friends, that I never got around to blogging about. I reckon, I better clear these before I entirely forget about the taste of the stuff. 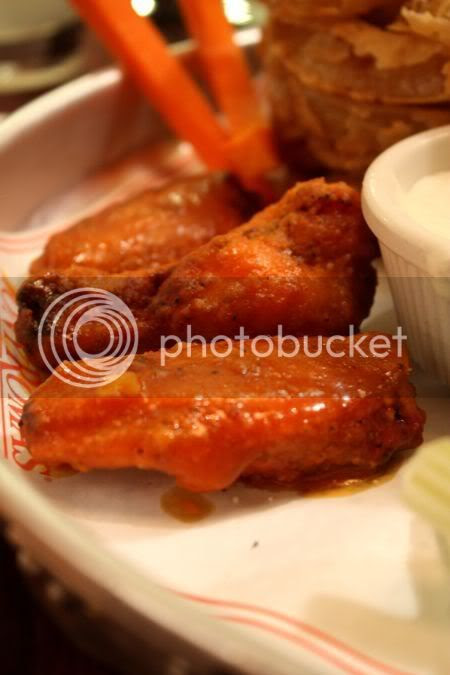 buffalo chicken wings - had better before

For those die-hard babyback ribs fans, Tony Roma's here is a major dissapointment, as they have decided to not serve any pork. While their major best-selling item is off limits here, the restaurant is doing quite well, and I have read some believe it is better than Chillis. Personally, I don't think so as most dishes I have tried in Chillis have been good while Tony Roma's seem to score lower in the taste category with their items. 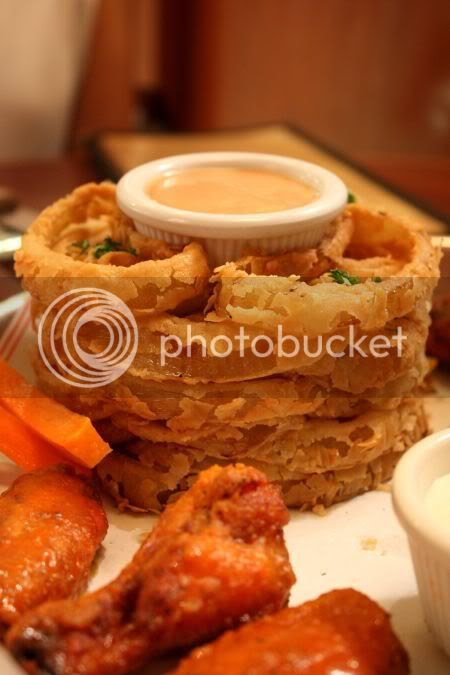 One weekend, we had decided to dine with friends - it was a good choice especially since portions were so huge, that we could share among the 5 of us. An appetizer platter was ordered - fried onion loaf, buffalo wings and potato skins. While the potato skins is quite sparse in terms of toppings, it was pretty good stuff. I didn't quite like the buffalo wings though, hence I drenched them with blue cheese sauce to get rid of that icky taste it had. Fried onion loaf was not bad, nice and crispy. 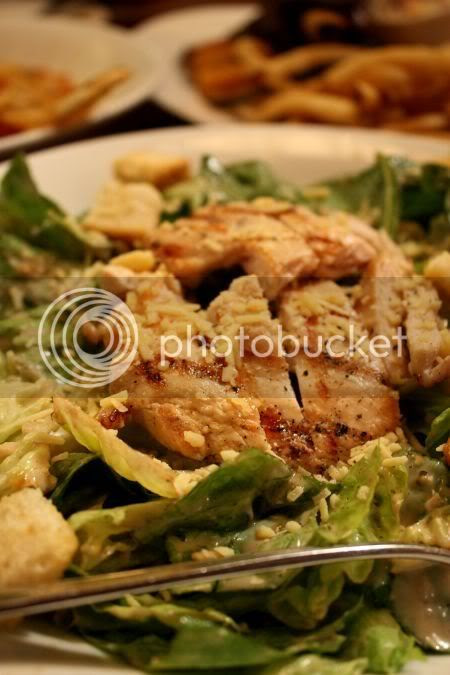 chicken caesar salad - a little too creamy for me

Since Jess was on a diet, we added greens to our order - a Caesar salad laden with grilled chicken pieces. I thought the salad dressing was a bit too much - very creamy and overpowering. We also had one gripe about the salad - they mixed romaine lettuce with other types of lettuce!!! Aiks, everyone knows Caesar salad is all about romaine lettuce and no other imposter lettuce will do! 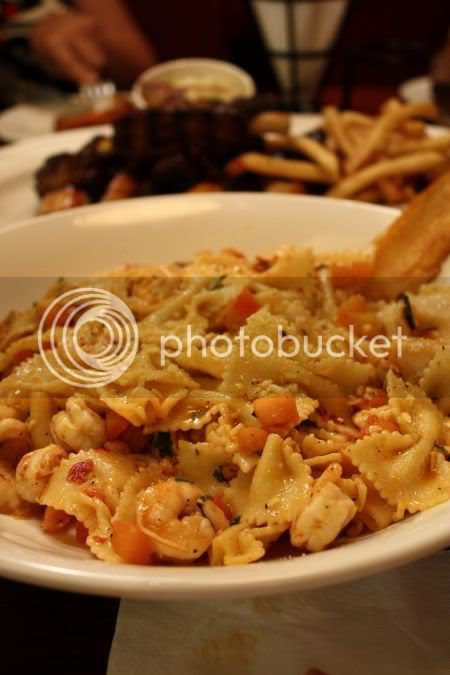 The pasta with its huge bowtie pasta, mixed with chopped tomatoes and shrimp, was frankly quite mediocre tasting, definitely not something I would re-order, if I dined here again. 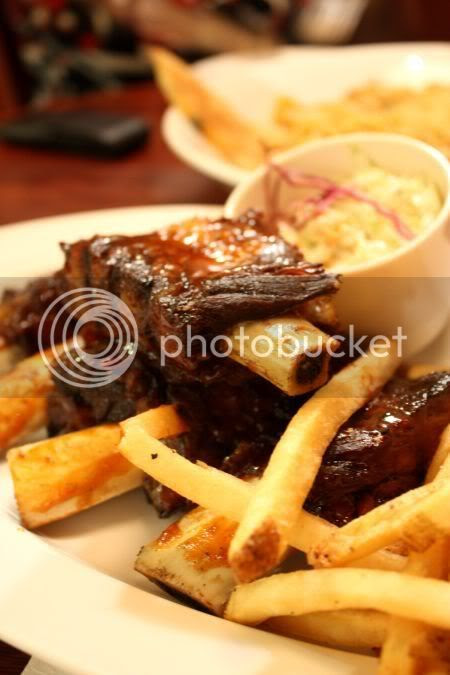 While all our other orders were mediocre or nothing fantastic, Tony Roma's redeemed itself with their a platter of bountiful beef ribs, which we shared - each one had a rib! Simply sublime - smoky with fork-tender meat, that I could eat these all day!!! Definitely made my meal here, or else I'll write off this place (I was kinda dissapointed the first time I ate here also but the beef ribs saved their rep too). 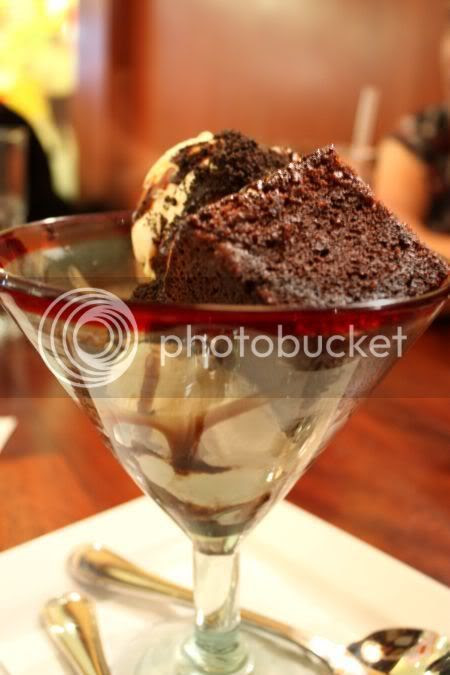 we made it to dessert...but it was dissapointingly not chocolately enough

Since there was so many stomachs helping out to finish the food, we managed to squeeze in some dessert - a chocolate Avalanche. While the dessert looked rich and inviting, it was sadly lacking any chocolate taste. Give me chocolate brownie with ice cream at Chillis, anytime instead.

While there were quite a number of misses here, one hit that I won't mind returning for again and again, are those melt in the mouth beef ribs!

(Pork free. Restaurant is located at the area that connects Mid Valley Megamall to the Gardens.)

only tried them once, had the Tony Roma's special burger or something. dry, hard patty, nothing compared to Chili's, TGIF, Paddington's.

but the value set lunch is rather affordable.

hi Boo-licious, ive been following ur blog since late 2005 but this is the 1st time im leaving a comment. Cuz this looks simply scrumptious! Im wondering whether you hv blogged on any good mexican places in KL..? any reco?

The food looks absolutely delicious - in fact, your food ALWAYS looks great! I get so hungry just looking at it. :)

Tony Roma's is really famous for ribs in US and it came all the way here and even made a big hit here, look at the number of outlets they have here in KL:)

I didn't try here but I've heard great reviews about this place.
The appetizer looked a little like what we can find in TGIF and Chili's though:D

well done! must say the food surely look nicer in your photos than how they tasted! hmmm was I on a diet then already? it's now down the drain already.. :(

Mama Mia!
the beef rib is just the all time favourite! Great pics!

I thought this is supposed to be Pork Ribs place?? It is one in Spore though.

Really wish if they could open a non-halal TR restaurant here too....

My sister and I were disappointed by the food during our visit. So, no more Tony Romas

I saw the restaurant somewhere in Kl, forgot where but it does not seem to have crowds. That's a sign right?

ciki - LOL! I actually vowed never to return but had no choice for this dinner, so my expectations was super low. Like I said, luckily the ribs came to save the day!

j2kfm - yikes! Overcooked too long. I know the one at the Curve area, pre-cooks their stuff as everything arrived too fast!

Radha - a good place is Frontera in Jaya One. Very authentic. Sandias the other authentic place has closed down already.

worldwindows - sadly the taste is quite lacking though.

katie - we're gluttons! but american food is so popular here!

christy - I guess being big is not at all that great, since they have compromised on taste, quality and etc.

jess - LOL on your diet. I guess we can eat other things, the next time we meet?

kaiba - ah, beef rib definitely worth eating here but not the rest!

tanalan2 - cannot lah, as company has Malay dtrs, so not possible to go for nonhalal food, unless they change franchise holders???

chenboon - yeah, really not worth it.

criz - not really. some packed places serve yucky food, but maybe becoz they are slow, you see a crowd?

Oh My God the ribs again, I wonder what camera you use to take these photos. They really excite my palate and take my mind to limitless imaginations. Its official, I love your blogs particularly the pics. Its a lovely post too.

The food is ok only. I've been to a couple of branches and both experiences were different.

Anyway, was hoping that the non-halal version came down from S'pore but.... :-(

Been meaning to try out TR for ages but most reviews i read are either so-so or not good at all.

Maybe shud try it in my next Singapore trip .. porkiliciouussss i like

So, only the rib and onion loaf worth eating here eh? I think I'll stick back to Tony Romas in Singapore.

You have an excellent food blog.

My friend when to the Pavilion branch and also kind of disappointed with the food. She told me and I helped her wrote a blog on it as well. Haha..