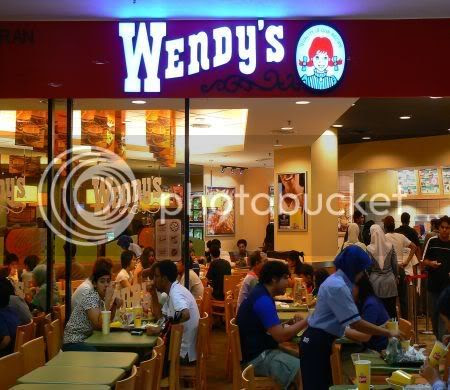 Last night, I finally got some time to check out the new Wendy's at Sunway Pyramid. It has been at the back of my head, that this place has opened but because of work commitments, I only made my way there late last night. 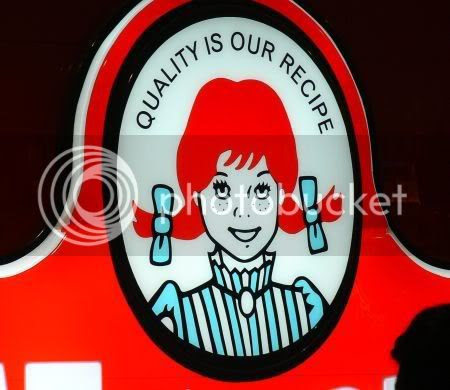 that red hair gal is back

Even though it was almost closing time, the place was packed with a queue. Opposite it, McDonalds looked forlorn and empty. We even bumped into an old friend, who also made an effort to come from town to sample the new fast food joint. 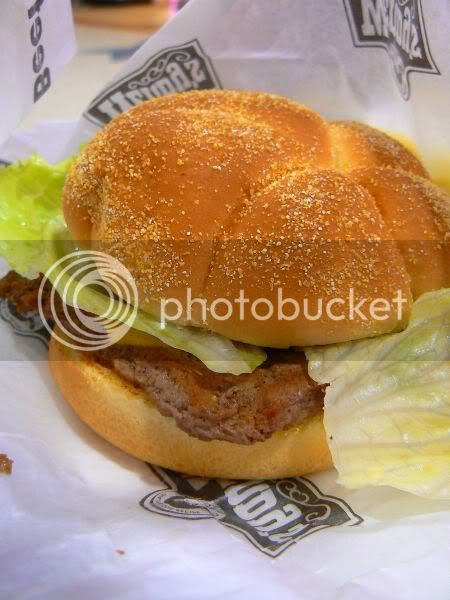 Owned by Berjaya Corp, they plan to open 10 more outlets this year. Next one is Jaya One, followed by IOI Mall and of course, at Berjaya Times Square where Berjaya has all their franchises housed - Borders, Starbucks, 7-Eleven and Kenny Rogers Roasters. 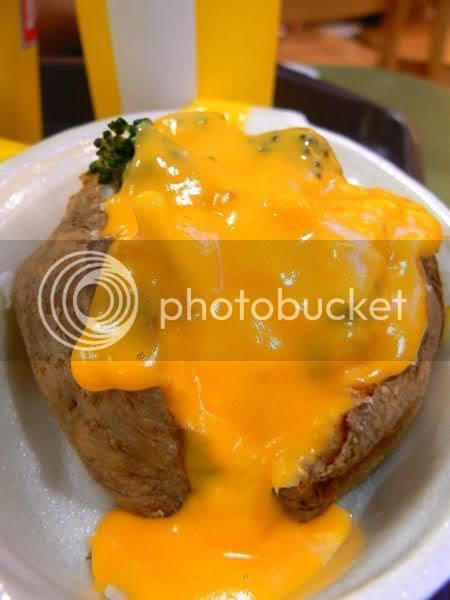 I vaguely remember Wendy's was located at Sungai Wang Plaza. My favourite there was their yummy chocolate milkshakes. So thick and yum! 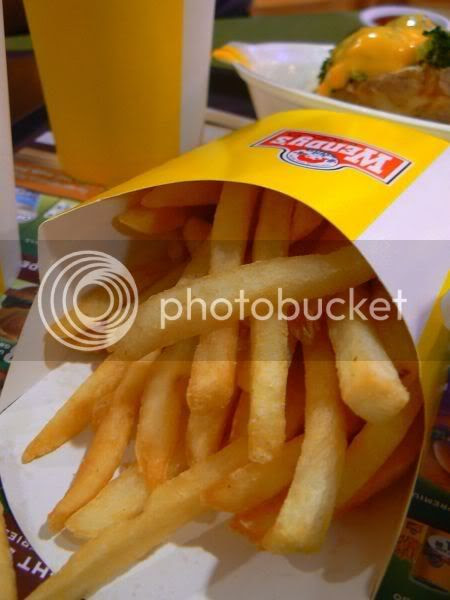 For the franchise in Malaysia, they're serving Quarter Pounders, Half Pounder Double with Cheese and the three quarter pound triple with cheese, fried chicken, fish fillet burger, shrimp supreme burger, spicy chicken sensation, ultimate chicken grill and chicken nuggets. Prices for the burgers range from RM6 to RM15 for the triple while fried chicken is RM6.90 and nuggets are RM5. Sets are also available with soft drinks and french fries.

They also have their signature sides - baked potatoes with 6 different toppings: butter, sour cream, sour cream and chives, chili and cheese, broccoli and cheese and cheese cheese. Chili is also available - minced beef with kidney beans plus who can forget, their yummy milkshake known as Frosty. They have a few flavours - chocolate, vanilla and twisted versions with oreo and m&ms. The twisted version looks like a Mcflurry. A seperate kids meal is also available. 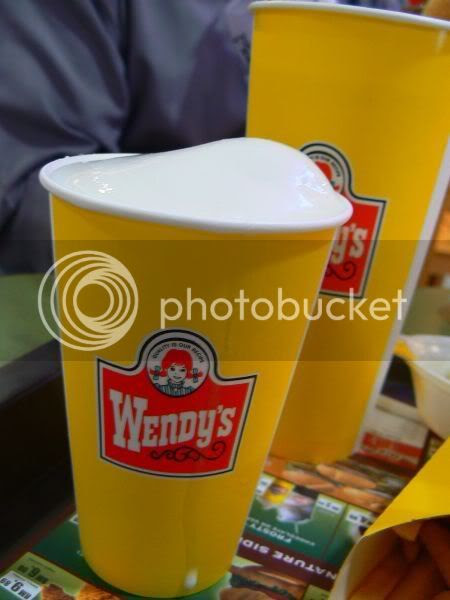 I liked the burger - juicy and square as "they don't cut corners". The bun was soft and quite old fashioned tasting. Said to be made when you order, it definitely didn't taste as it has been sitting in a warmer which is great. I thought the broccoli cheese baked potato was okay only - definitely not worth a re-order. I had great fun dipping my fries in the Frosty. Sadly no chocolate available as it had sold out. Overall, a satisfying meal and we preferred it to Carl's Jr in terms of affordability. The burger is good but a bit basic, the toppings.

Wendy's
Near the skating rink
Same floor as Marrakesh

hi, thanks for the review.. i remember going to wendy's in town during kiddie days so i've been waiting for the opening..

did i read correctly there's a 'cheese cheese' topping for the baked potato? double helping, yum!

u knw, to be honest i dont know what the big hoo haa wendys is..doesnt it look like another fast food joint like McDs?

oh this place...
i remember very long ago they were in Sg Wang
but unfortunately my experience there was not pleasant =.="

I remember the Wendy's in Sungai Wang too! I used to love the cheeseburgers. Even then, I would devour two burgers because they were so small. They look a bit bigger now.

i LOVE wendys. sheeesh, obviously ppl like nipples are too young to remember her...eugh, to compare her to mcdonalds...sacrilege. there used to be one off jln batai next to hock lee's too. nice to see her back in Malaysia. I hope the next thing they bring back is ARBYs. (american roast beef yes sir).
then again, in all fairness, things that tasted good in our childhood might not taste good now.

kinda confusing when i last when there. . .

Like some of those above, I remember the old Wendy's from the early 80s in Sg Wang. Wonder why they are trying to re-establish it again after all that time. Isnt it even more competitive these days to open a franchise? Also, with people being more health conscious as well.... bad timing?

Hi, I am writing to you from YouthMalaysia.com. We are a NGO that focuses
on Youth Development and also creating a community of Malaysian Youth
online. Check out our website if you want to find out what we are doing now.

We would like to invite you to be a part of this program. Kindly drop me an
email (michael@youthmalaysia.com) or call me at my office 03-8023 3352 if you are interested?

last time they used to be in Sg. Wang and I used to go there often with my parents (that was when I was a kid). Really missed it when Wendy's packed up and left town. Got to have it quite often when I went to Canada to study and missed it again when I came back, so I was very glad when it came back. (was waiting anxiously for the one at Pyramid to open!)

I love the burgers and the chili! can't find good chili anywhere here nowadays (at least not where I've searched).

i dunno abt wendy's when i was younger (prolly penang din have it), but i miss white castle! do u know if they're gonna be back?

You are right some years ago their 1st outlet in sg wang came and went quite fast even tho we know they are quite a hit in USA. Probably same timing when Grandy's and white castle hit the floor. We liked her pretty name tho , sounds too familiar.

Eh, seems like a lot of ppl know about Wendy's, we don't know about it at all. Haha! Guess it's time to try it out!

aww when i was in pyramid a few weeks ago, wendy still wasn't opened.. SOBBBBB..

hey, have u heard of Cheng Hu restaurant? its a chinese islam seafood restaurant owned by Amy Search.. im trying to find its location! erghh. they covered it in Melodi today but didn't reveal the location of the restaurant.. but i found some pictures though

petal - Iguess its double helpings of grated cheese. Great for a cheesey fan.

paprika - I guess they wised up that small burgers don't sell. I remember those teeny weeny burgers in White Castle also but they were so yummy though!

fbb - am sure they will bring back Arby's as we seem to be having a revival of stuff. Wonder when White Castle is coming back?

hazza - I guess Berjaya willing to take a chance. If they have the monies, why not?

married since 07, don't sigh! eat it in moderation or else it will be Fat Nation.

enochho - yeah, I guess each one has their USP. Thxs for the reminder.

I love white castle too, Jun! Berjaya, if you are listening, pls bring that back ok?

teambsg - ooooh, Grandy's! That is a blast from the past.

sugar bean - I guess give it a try one day, no harm.

Jackson - when u have free time, give it a try.

Little Corner of Mine said...

Finally the first Wendy's opened in M'sia. We love the fries and chicken nuggets there. All these are under $1 menu and Wendy's hamburger is priced at only 50 cents, such a cheap meal right?

I used to love Wendys when I was a kid, and I think Wendys was supposed to be like some kinda Diner Style eateries in the states.

Wah.... really can't wait to go try their food there.. lets hope Berjaya does a better job than MBF.

the cheesy potato looks so yummy...

there is a WENDY's now? wow, so so so long ago when they seemed to be out of business. Loved Grandy's as well. Is there a revival movement? Renaissance for fast food joints aka Carl's Jr style? love fast food, will definitely give the baked potato and 1/4 pounder a try.

Do they have chilli. I remember eating chilli in Wendy in Sg. Wang long long time ago. We have no Wendy's here. Here instead of Mc donald, I like to eat Hungry Jack (Burger King)

Agree with Fatboy, bring back Arbys. Love their roast beef. Arby's used to be in Pudu, near the cinema, if I'm not mistaken.

only in sunway piramid hows about others outlet??

the fast food outlet of my childhood days are back. the last time i had wendy's was back when it was near mun loong in KL.... mmmm...

I am waiting to try Wendy's. Many complimented on the 'old' one in Sg Wang, but I wonder, how is it it now as compared?

Found this latest updates on Wendy's outlet in KL http://gblog.gpros.net/?p=314