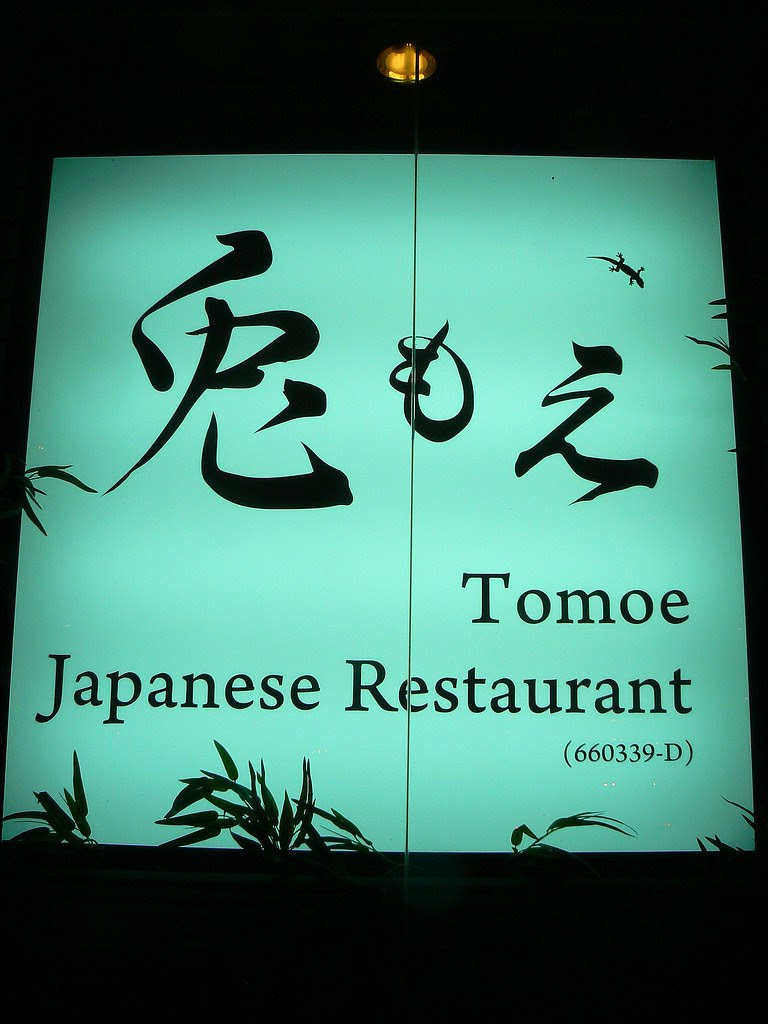 Last Friday, I was feeling a tad depressed since I was working on Saturday! Feeling like a boost in my system, I suggested we try Japanese in Subang Jaya - an unexplored territory for me. Original intent was Shun, opposite Subang Jaya Medical Centre but there was a function at the nearby Sheraton Subang ballroom, which caused a mini traffic jam plus a shortage of carparks around the area. 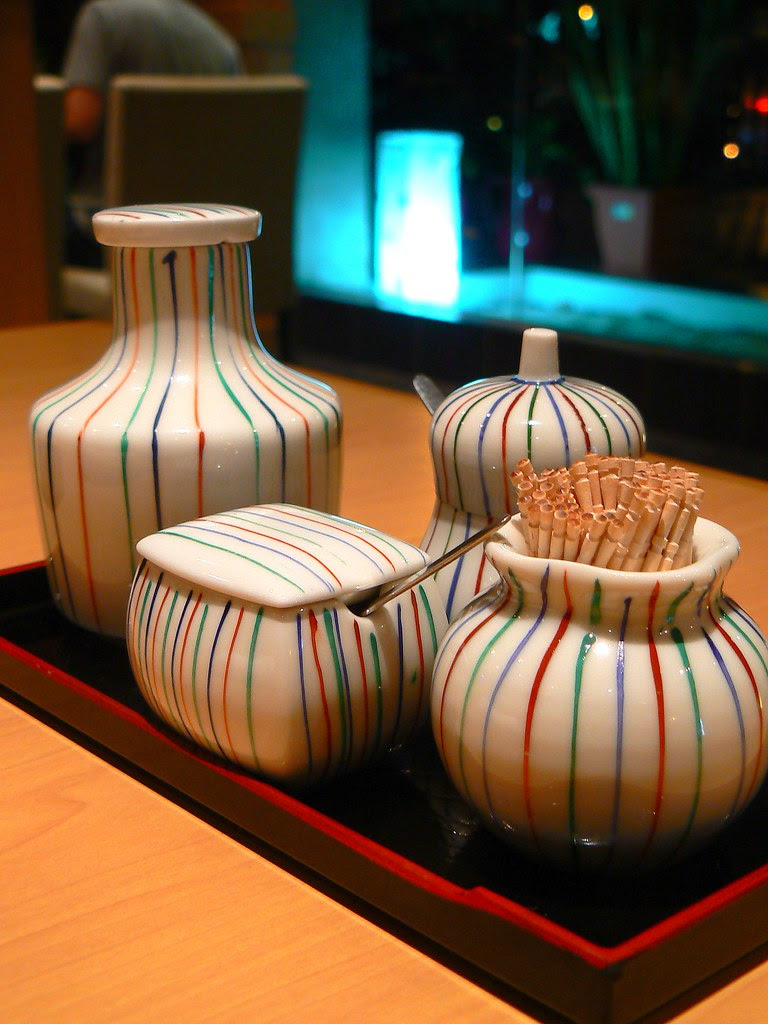 pretty condiments set on the table

Changing tactics, we decided to check out the other Japanese places along the same row as Rakuzen. Passed by Hyotan which looked interesting but ended up at Tomoe, the corner restaurant as there was parking nearby. Tomoe also provides free jockey service, an excellent idea since this area lacks parking spaces. Since Splashie Boy is super sensitive when it comes to his car, he vetoed the idea of a valet. 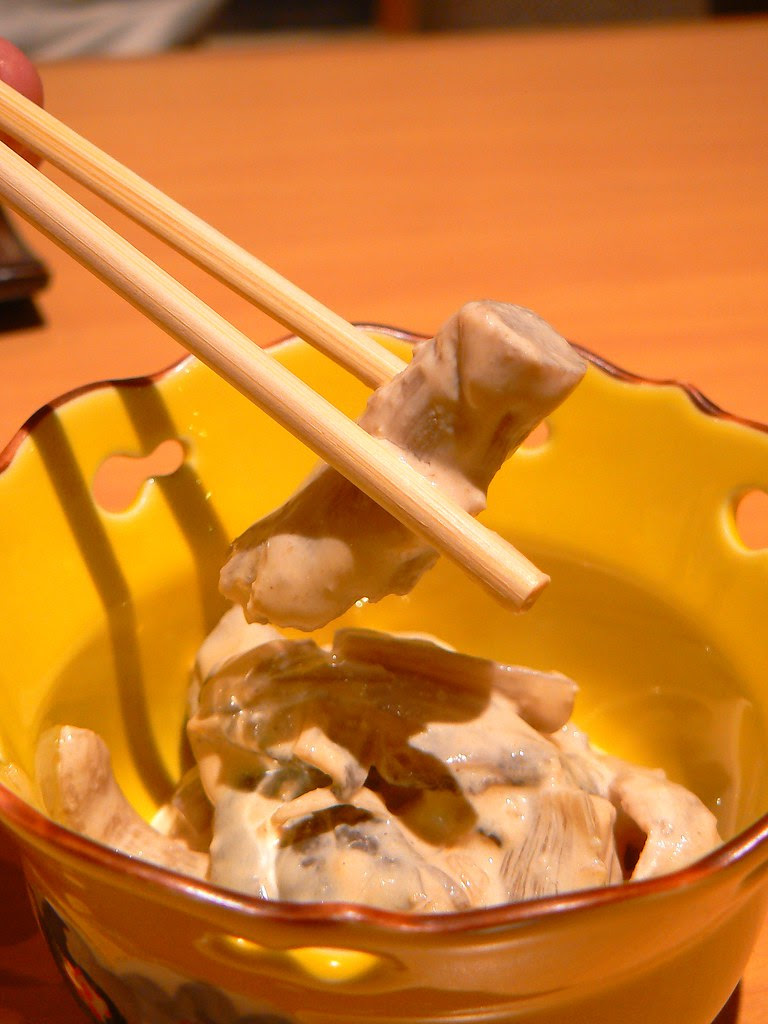 The place gave us a good vibe, as it was packed with people: locals and Japanese businessman out on the town, after a hard week of work. We ended up in the smoking section since no space was available in the other section. Luckily, no heavy smokers were around. 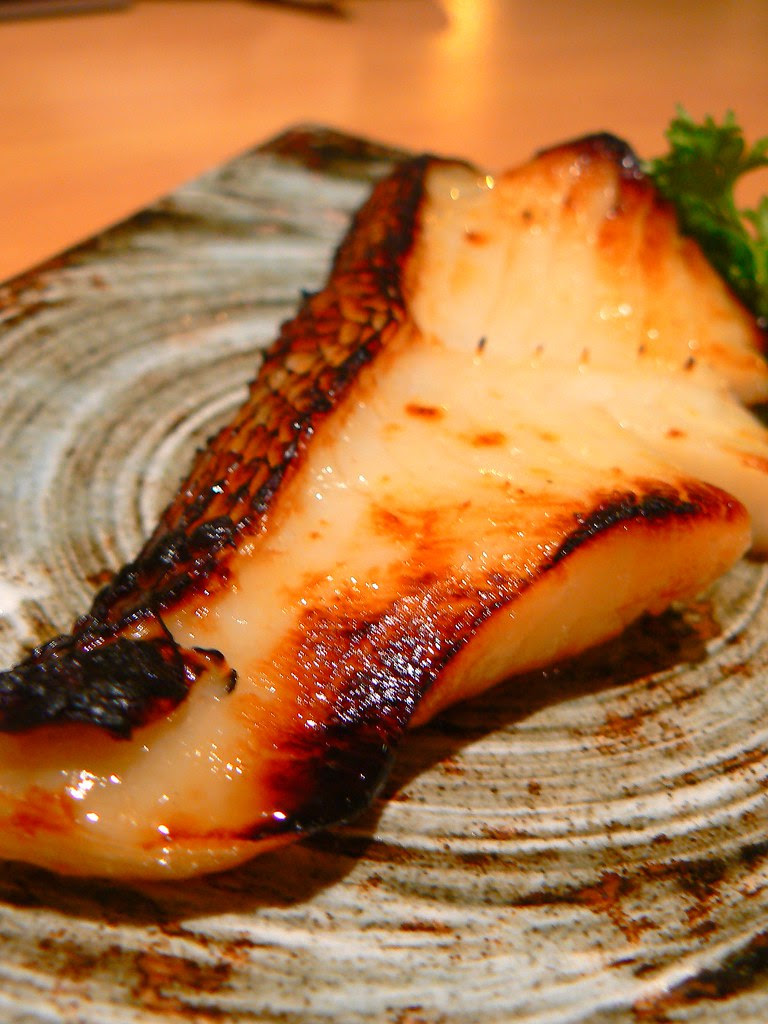 Feeling lost with their menu, I decided to ask the waitress for recommendations. What's interesting to note is, there's no set dinners available. I now know they have set lunches per reading other blogs but no set dinner menu was presented to us. Instead, what we got was the weekly specials list and their regular menu, which we ended up ordering from. 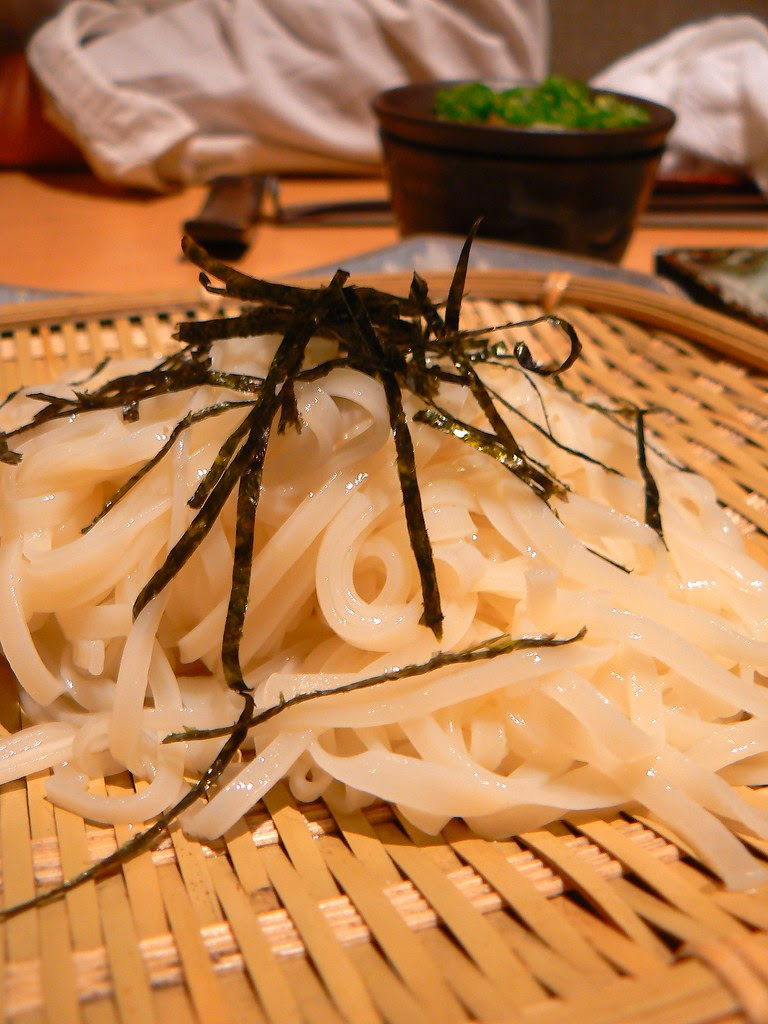 Throwing caution into the wind, we went for the waitress recommendations. First, it was a seasonal vegetables with sesame sauce (Shiradatu Goma). However, it turned out to be more mushrooms vs seasonal vegetables. Luckily the sauce was good - creamy with a not too overpowering taste of sesame seeds. We both felt it was a rip off as that small bowl costed RM18. 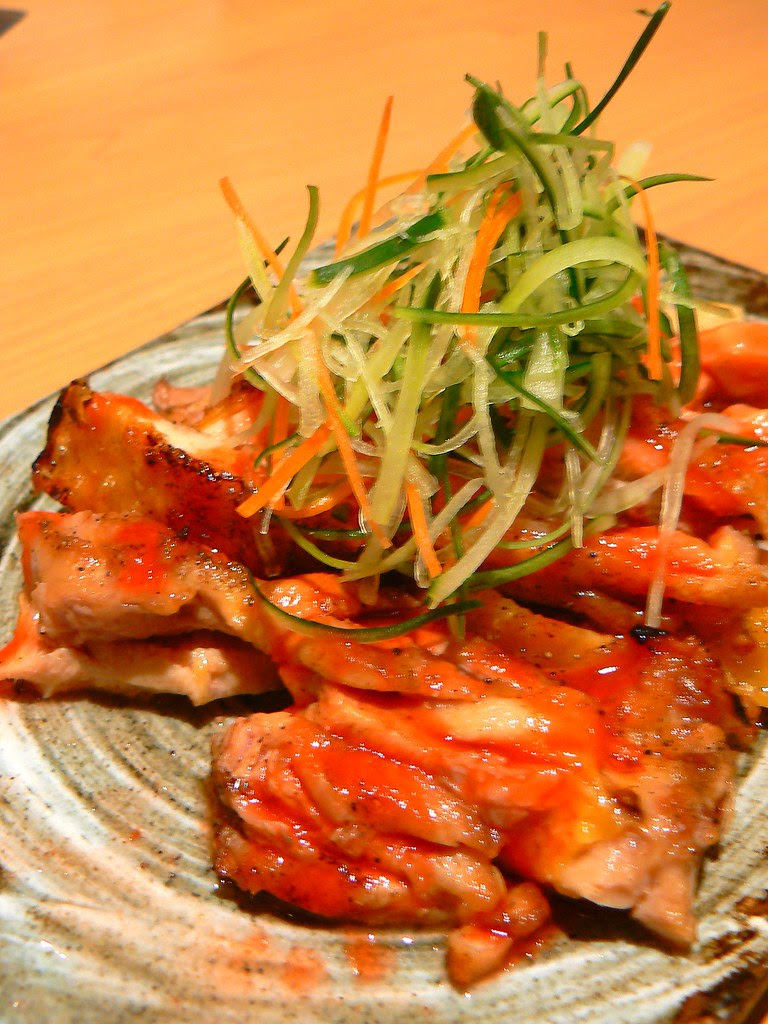 Next was the recommended grilled chicken with salt and plum sauce. This was good - the chicken meat was tasty and again very fresh. For those who prefer the soft antibiotic type of chicken meat, this is not for them as this chicken had a bite to it - imagine choi yuen kai (free range chicken). There's not much taste from the plum sauce but the chicken does not need anything else to supplement the juicy sweet taste. 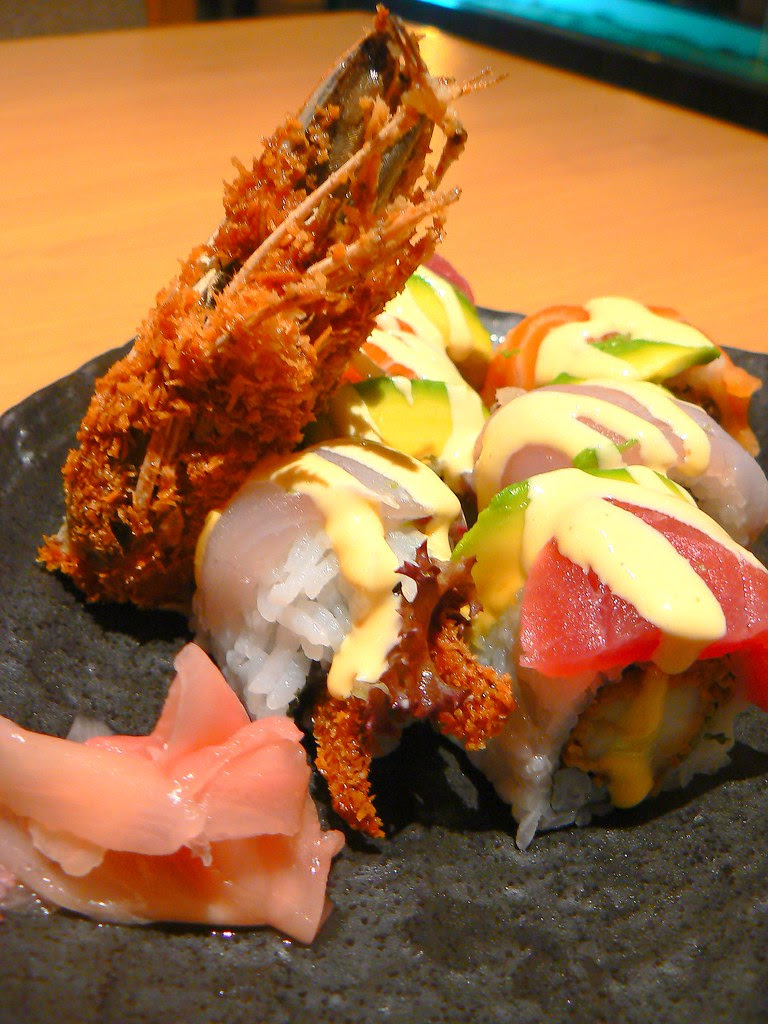 Dragon Roll (RM32)
As the dishes kept coming, things kept getting better. My absolute favourite was their black cod grilled with miso (Gindara Misozuke Yaki). So incredibly fresh, that the flesh has a nice bounce to it and so unlike the water logged frozen cod you get in Chinese restaurants. A quick check with the waitress indicated we had walked in on the right day, as the fish just flew in from Japan. Usually the fish supplies come in Tuesday and Thursday or Friday, so we were lucky to catch this very fresh fish. 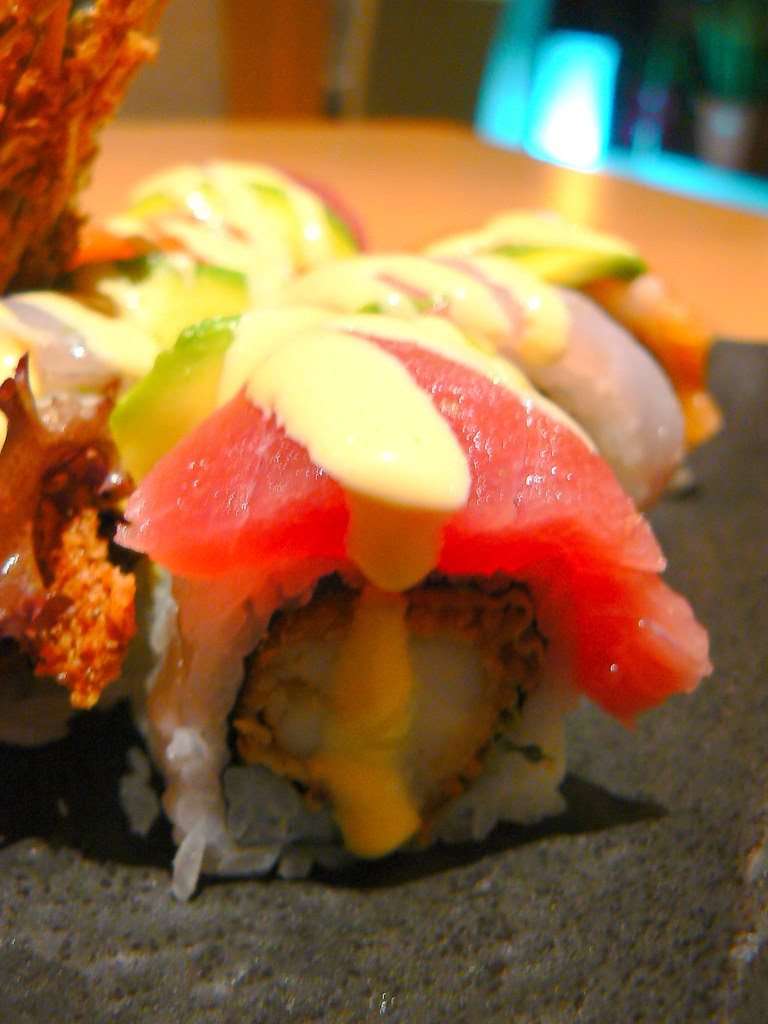 I also loved their dragon roll. Less rice than the other restaurants, it featured a gigantic prawn within and topped with generous slices of tuna, melt in the mouth avocado and a drizzle of mayonnaise. Weird but I didn't taste any mustard like how she, the epicurious girl mentioned. Maybe they had changed the sauce or toned down the mustard?
Instead of rice, we decided to go for the Inaniwa Udon - not bad but not my absolute favourite as I think I would have liked soba instead. I did like the tangy taste to the dipping sauce for the noodles, from a greenish plum sauce. Gave a kick to the plain tasting noodles.
Overall, we were supremely satisfied with the freshness of the fish, chicken and the dragon roll. Will definitely make a re-visit to try the sashimi especially on those days the fish do their fly in from Japan.

Post-script (16/4/2008) - I read Jules Eating Guide to Malaysia, he ordered different items on the menu and didn't have a good meal. Do take note, guess not everything on the menu is good.

(Pork free. Same row as Rakuzen.)
*Disclaimer: The opinions expressed here is entirely based on my personal tastebuds and may vary for others. The reviewer also declares that she has not received any monetary or non-monetary compensation from the restaurant for writing this review.
Tagged with: Japanese Food+ Subang Jaya
Other reviews:
Posted by boo_licious at 12:00 AM

the grilled black cod looks so good... but why the udon so flat one ? just like our hor fun :p

cumi & ciki - the cod was awesome! Thxs for the lempeng tip, we went and ate. Very good. Will blog abt it soon.

ling239 - think this is a special type of udon from what I read. Yeah, kinda like a flat wheat noodle instead.

Ooo..another gem discovered. So best time to have sashimi is Friday??

Interesting. Not many Japanese restaurant in Malaysia serve cold Udon because to make cold Udon, very good handmade Udon only can make it taste good.

I've been wanting to go for ages, but always seem to end up back at Rakuzen or Shuen located nearby ... Hmmm. I must try :-) Great pictures again!!

Ps - Thanx for your kind comments on my blog, I am well chuffed that Star picked up on my Williams write-up :-)

".. as the fish just flew in from Japan"

Hehe, the way you wrote it made me laugh! I was imagining the cod fish with wings and flies in the sky! :p

haha. i thought it would be a disappointing place but by the time i read the end of the post, i want to eat sushi now!

precious pea - I would think so. But from what I read in Julian's recent visit, not everything is good.

simon seow - I doubt it's handmade.

Julian - sorry to hear abt yr visit there. Guess not everything is good at this place.

j2km - ah...those are frozen ones and they're not even cod! some bass if I am not mistaken.

daphne - think only certain stuff nice. Read a not too great review.

Hi! Thanks for your comments :-)

Yah ... I was rather dissapointed at the place, but our selection of food differed ... My dinner party chose the cooked-Japanese foods, whilst you picked the traditional raw stuff :-)

Moral of the story? Stick to raw!

I am so impressed, you even have an updated Post-script section on your blog ... I am flattered by the mention. Thanks :-)

We went there last Saturday! A day later after you went there! Haha! We love the food there too, we noticed they have quite interesting menu, their udon with duck was good!

julian - no worries, sorry, you didn't have a great time.

sugar bean - oooh, udon will be good. I had soba with duck the other day and it was super yum.

Hello nice to meet you.
I saw your wonderful site.
Please link to this site !
Website：http://food-of-japan.blogspot.com/

yummy... i should try it out!! hahaha.. but i prefer if the place were managed by japanese, which means the quality of the food would be of a certain level.

however, i do not recommend shun as it is not as good as it is said to be and is a tad bit overpriced.

wished i did a review of it but then, the taste of the food @ shun seemed to be more sub-standard than rakuzen.

in fact, ever since shun opened, i see less japanese patrons there.

happen to bump into your blog while searching for something else :)

nice write up, you should try Hyotan Japanese Restaurant (the one you ended up not going), they have great food! I think it's because their cook their is Japanese.

The quality has dropped ever since. There's new competitors next door with better quality and lower price. I won't go to tomoe, slow service, small portion of dishes and expensive!