I Can't Believe The Election Results Pie - Inspired by The Waitress 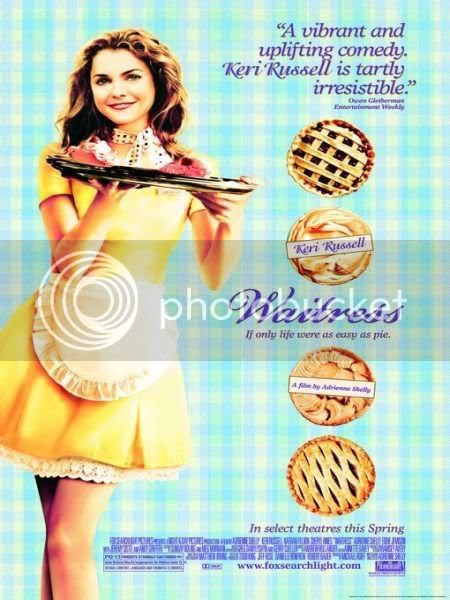 On Saturday, I managed to catch this amazing movie called The Waitress. Perfect for foodies, it has Jenna, the waitress making these delicious pies, which she names based on her situations and moods. They have weird combinations, but tastes utterly great, based on all the ooh and aahs from her fans in the diner she works at. A Sundance Festival 2007 pick, this movie became a hit in the USA. It is also a bit poignant as the screenwriter and director, Adrienne Shelley was murdered just before the movie's release. 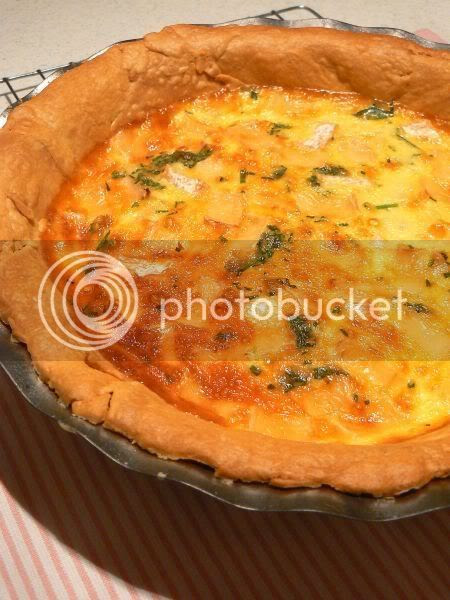 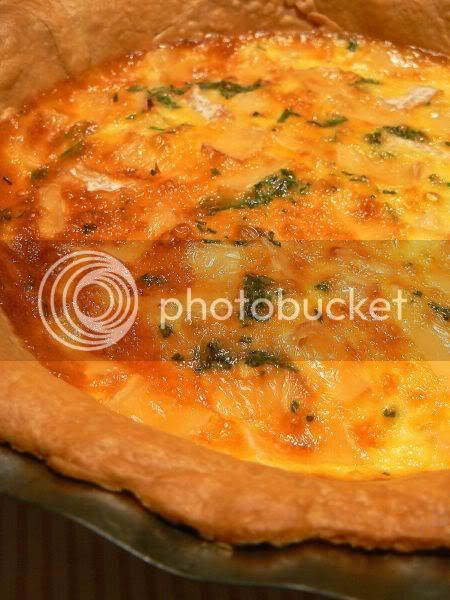 Close up of pie
It is a huge pie full of goodness - brie, chicken ham, eggs, cream (I used light thickened cream to ease the fat content a bit) with herbs. 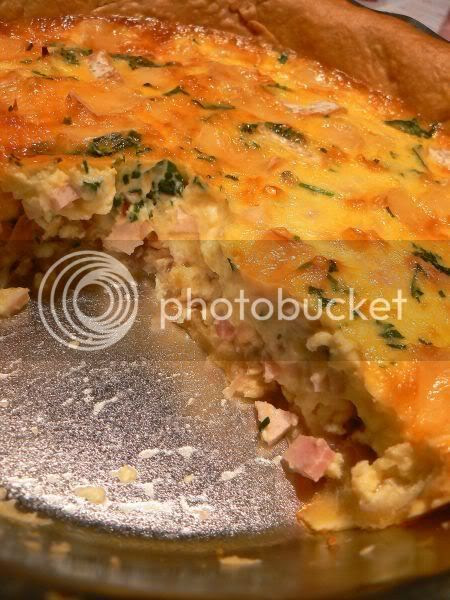 The inside of the scrumptious pie
The pie was downright delicious - Splashie Boy and I loved it, so much it was dinner on Sunday night and probably his Monday lunch treat. I did cheat a bit as I wanted to do this quickly, since I only started getting inspired on Sunday afternoon - I used readymade shortcrust pastry. Not a good choice as I found it a bit hard. Kinda prefer my buttery and lighter pastry.
Do give it a try, and maybe you can start inventing your own pies. I know I have loads to try as I picked up a copy of Page One's 500 Pies and Tarts from the Popular bookshop fair at Ikano, on Sunday afternoon.
I Can't Believe the Election Results Pie
(adapted from the Delicious magazine)
50g butter
1 tablespoon olive oil
3 large onions, sliced thinly
4 large eggs, beaten
400ml double or thickened cream (I used Bulla's light version)
1 large garlic clove, crushed
25.5cm shortcrust pastry case (I blind baked my ready made pastry)
175g smoked ham, chopped (you can adjust this to ham, chicken ham or turkey ham)
2 tablespoon each chives and parsley, chopped
100g Brie, chopped
Make the shortcrust pastry case first. I blind baked mine in the oven for 15 minutes, at 200c. Cool for a while before adding ingredients.
Heat a frying pan, add butter and olive oil. Fry sliced onions over a slow heat, about 30 minutes, till soft, brown and caramelised. Drain excess oil and remove from pan. Set aside to cool for a while. Mix eggs with cream, till well beaten. Stir in garlic and season to taste.
Preheat oven to 160C. Spoon cooked onions into cooked pastry shell and cover evenly. Top with chopped ham and herbs. Pour over egg mixture and add chopped Brie, all over the pie. Bake for 45 minutes, until golden brown and set. Remove from oven, cool slightly. Eat while warm.
Posted by boo_licious at 12:00 AM

now everyone would want a slice of ur pie i bet ;)

Wow, the pie looks so delicious! Don't think I'll be able to make one myself, gonna visit cafes for pies! Haven't have one for quite some time!

Wahhh Boo, am salivating oledi. Certainly looks very very very good. Yumzzz....I am thinking of making chicken pie too, inspired by FBB. Yet to get a pie baking dish so will do it once i grab hold of it.

The title and pie stole my heart ^_^ I would love to try this recipe after looking at the outcome, so delicious!

the recipe is easy and definitely look scrumptious

The pie looks wonderful. Thanks for providing the recipe, I cant wait to try making it.

when is a quiche just a quiche, and when does a pie become a pie?
well, pie or quiche, it looks delicious, like the magazine from whence it came.

can i have my share please? coz i exercise my responsibility..feeling proud and **pat on my shoulder**

That pie sure looks comforting! Mmmm. Can I just say something? CUPCAKES. :-)

The election results were surprising but the wake up call has been long overdue.

i'm not really a cook but I noticed that in your recipe you fried the onions for 30 minutes. Wouldn't that reduce the onions from sweet, caramelised slivers to charred bits?
But your pie does look great!

Oh NICE! I like the addition of BRIE!! hv to try that. And the golden colour of the pie is sooooo pretty!

ham, eggs and cream...what else can one ask for? finally, my post-sweeney todd trauma is gone....hehe

I can't believe that I can only look at that pie!

i'm wondering, what's make you so interested with food. I mean, is there any special things that make you interested in food so much or just because those food delicious?

haha! that's an interesting name for your yummy looking pie! well, i can't believe the election result either, especially when I found out that my hometown has fallen into opposition. :-P

brrrrillant! i absolutely loved the movie (all those creative pie names!)and was thinking of baking a "Make 'em suffer pie" on the week before elections (something with bananas (for the 'monkeys':P), nuts and er...custard?) but of course never got round to it...sigh.

hungry just looking at it..so creamy and delicious..can i have a slice? pretty please?

precious pea - whoopee, am sure FBB's pie will taste great. This one is an extra deep and big pie dish I have. Great for deep pan pies.

durianberry - hope u try it out. Pretty simple esp if you cheat with the readymade pastry but be warned as it is not great pastry.

babe-kl and jaded - good luck with it!

fbb - I think more American will say pie vs quiche which is French rite? It looks like a mash of pie and quiche to me.

Jojo - that is why the pie taste good as the election results were surprising and good.

paprika - sigh! I must search for my recipes. Dunno where I put them in the hse, unless I zap them with my friend, who also went for the same class.

henry yeo - I ate it and it was very good too!

jenny phang - fry it over slow heat and it won't burn as it cooks down in the butter and oil.

nic - comfort food of course. Yummy for the soul.

faizal - I guess I'm just a greedy person? Must eat, sleep and think of food.

piggy - yeah, I guess that one was in the cards for a long time already.

fbb - oops, all those double meanings.

Sam - high five! Someone who watched the movie also. LOL on yr pie suggestion. Not too late to create one.

sc - sorry darling, no more already. All in someone's tummy!

I haven't been here for a while and my...stumbling across the "I can't believe the election results pie", I must say it looks all too lovely. Although election results wasn't very lovely for BN :P

I must try this pie recipe soon. It'll have to be a vegetarian one though, any suggestions? ;)

Boo.. I wanna try the recipe. But May I know what is Brie and where can I get it? THanks!