Kicking off my culinary capers in the kitchen, I tried my hand in mixing up a large batch of meatballs. I've always viewed the making of meatballs a bit of a pain as it involved quite a bit of work. However they're a firm favourite of my boyfriend, Splashie Boy and since I have started my blog, I plunged into all that minced meat.

Although there a variety of ways you can mix up the meatballs ranging from the Swedish ones to even Chinese beef balls, I wanted the traditional Italian American ones that are served with tomato sauce and spaghetti. I chose to go with Nigella Lawson's recipe in her Nigella Bites cookbook as reviews indicated it was simple and divine.

For the meatballs:
Just put everything in a large bowl and then, using your hands, mix to combine before shaping into small balls. Place the meatballs on baking sheets or plates lined with plastic wrap and put each in the refrigerator as you finish them.

For tomato sauce:
Put the onion, garlic and oregano into the processor and blitz to a pulp. Heat the butter and oil in a deep, wide pan and then scrape the onion-garlic mix into it and cook over low to medium heat for about 10 minutes. Don't let the mixture catch; just let it become soft. Add the tomatoes and then add about 3/4 cup of cold water to the pan with the pinch of sugar and some salt and pepper and cook for about 10 minutes. The tomato sauce will appear thin at this stage, but don't worry, as it will thicken a little later. Stir in the milk and then drop the meatballs in one by one. Don't stir the pan until the meatballs have turned from pink to brown, as you don't want to break them up. Cook everything for about 20 minutes, with the lid only partially covering it. At the end of cooking time, check the seasoning, as you may want more salt and a grind or two more of pepper.

Here you have all the meatball mixture in a bowl ready to be mixed. The minced meat has covered most of the ingredients but you can see the egg on top. I whisked the egg to break it up so it's easier to mix it in.

After some mixing which was done lightly as possible with the fingertips, I made them in small balls. Don't they look cute in their little rows kinda like soldiers. After that I plonked them in the fridge while I made the tomato sauce. 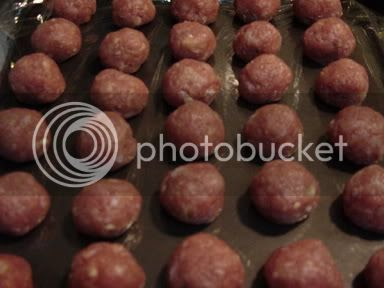 I made a slight variation to the tomato sauce and threw in a stick of celery to the onion mixture to be blitzed. As I had no passata on hand, I blitzed a can of whole plum tomatoes to liquidise them. What I love about this recipe is it calls to simmer the meatballs which is much healthier than frying them in the oil. However, this makes them a bit pale instead of the usual brown meatballs. As there was no spaghetti in the larder, we made do with linguine instead. 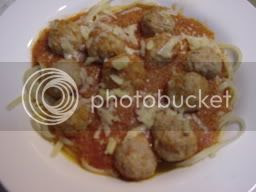 Once everything was ladled in, I sprinkled some freshly grated parmesan on top. 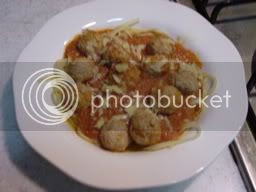 We had loads of leftovers as the recipe was for six people but that meant opportunities to use the meatballs for a variety of meals such as a meatball sub ala subway style with ciabatta bread or even meatballs with baked potatoes.

Thanks for the tips and recipe. I love the photos, they make me really hungry now :)
Free Credit Score