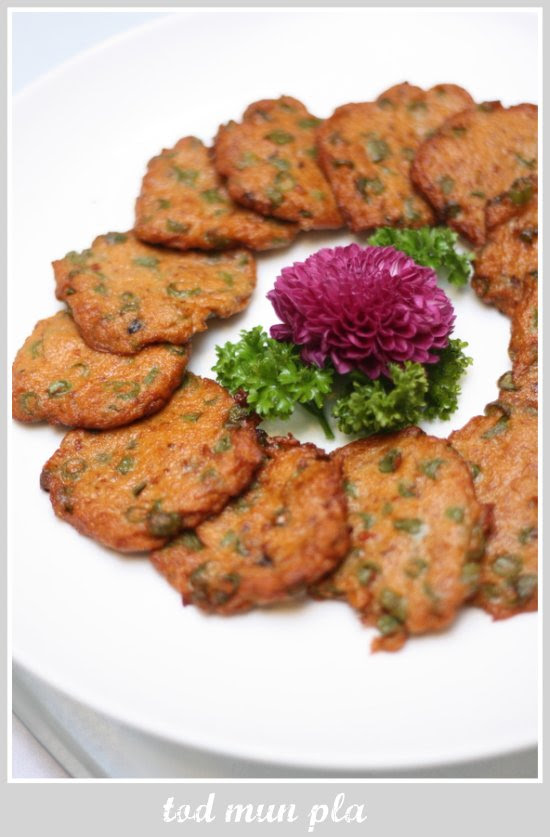 Thai food in a Chinese restaurant? 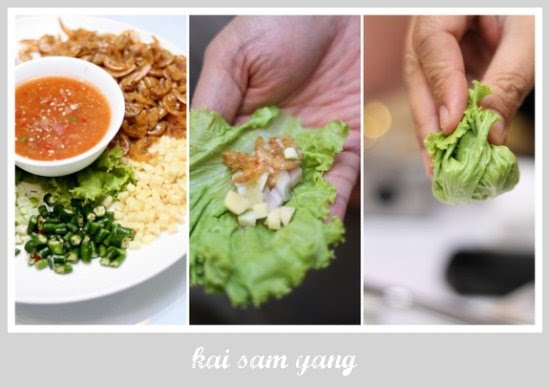 The owners of Chef Choi are extremely adventurous when it comes to food. Instead of just focusing on Chinese food as their name would suggest, it's literally anything that they love to cook and eat, that is served here.


Thus, you find Western classic desserts like crepes suzette, creme brulee mingling among steamed Soon Hock fish or Hokkien noodles in the menu. We recently sampled their Thai food and from what I hear through the grapevine, there's talk of a BBQ menu as they have outfitted the kitchen with a rotisserie BBQ. 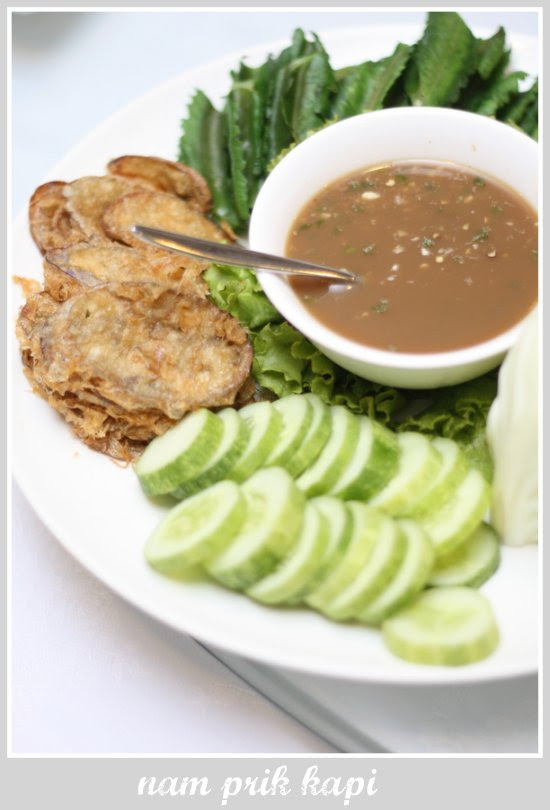 Since their main focus is not Thai food, the items featured from this particular dinner are by special order.


The dinner struck a chord among us as each particular dish had a specially concocted sauce that was utterly delicious. One of my friends G, who loves her Thai food hijacked the sauces and was literally drinking it down. 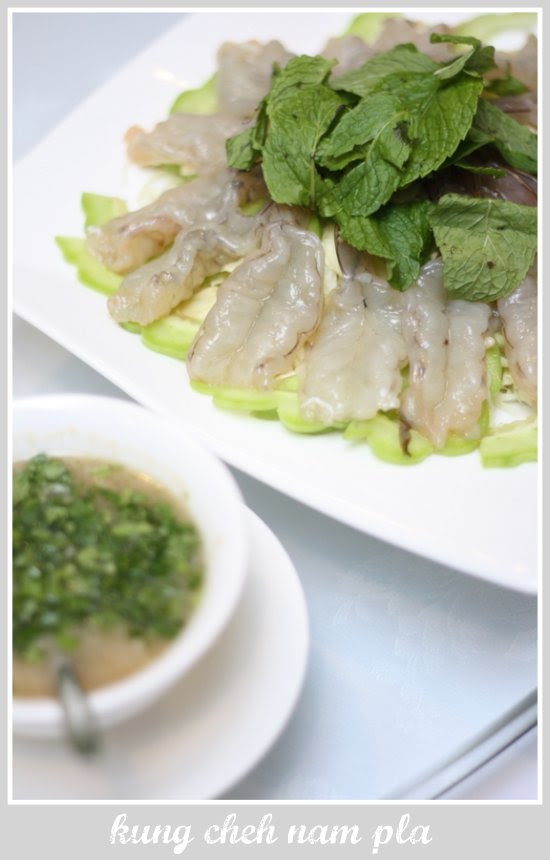 We started dinner with the Kai Sam Yang (fresh lettuce and dried shrimp in Thai style) - a variation of mieng kham whereby lettuce leaf was used instead of the usual betel leaf. It's simple as 1-2-3 to eat this.


Just lay a lettuce leaf on your palm, fold it to resemble a cup and start adding the goodies in it. You get a choice of tiny deep-fried aromatic prawns, galangal, chillies, lime and onions. Drizzle the Thai chilli sauce, a mixture of fish sauce, chillies, vinegar and lime that has all the nuances of a Thai dish. Shape into a money bag and pop into the mouth. 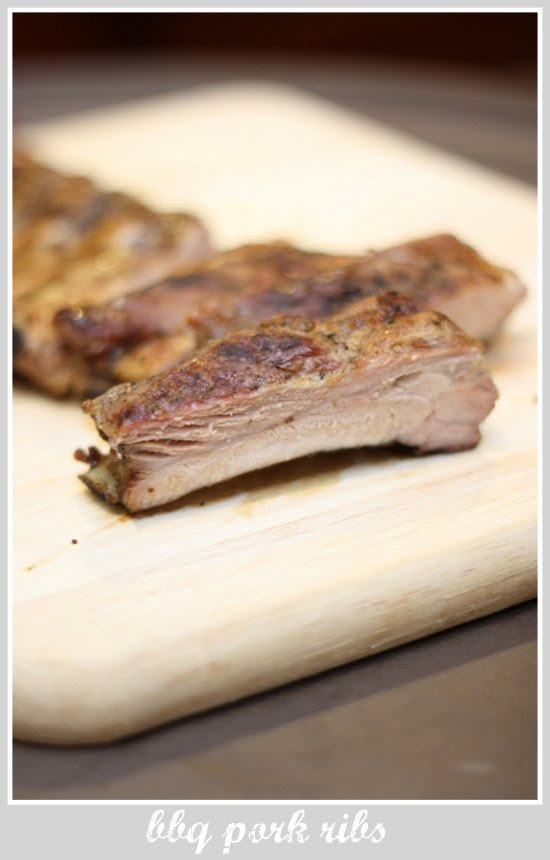 Next was the Nam Prik Kapi (fresh vegetables served with Thai shrimp sauce). Loved the pungent aromas of this sauce laced with Thai belacan. We could not get enough of the deep fried eggplant, blanched four angle beans, long beans, cucumbers and white cabbage. Who said vegetables are boring should give this dish a try. 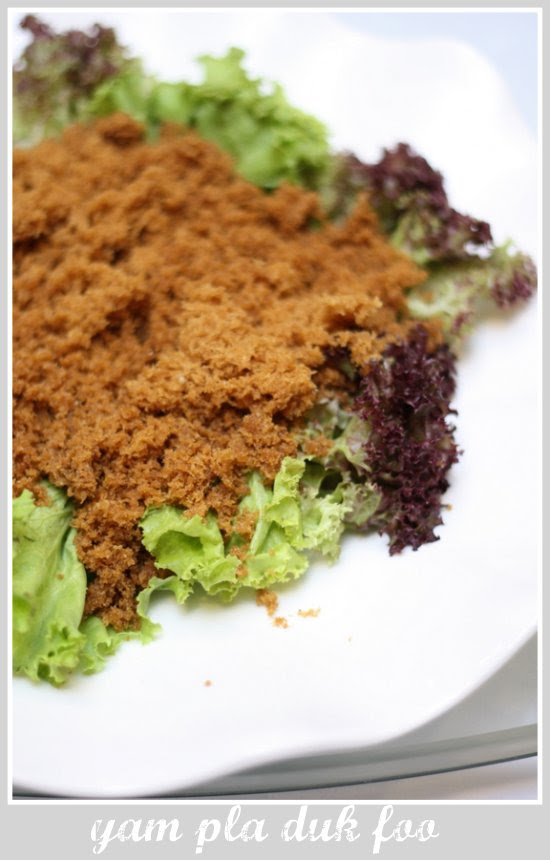 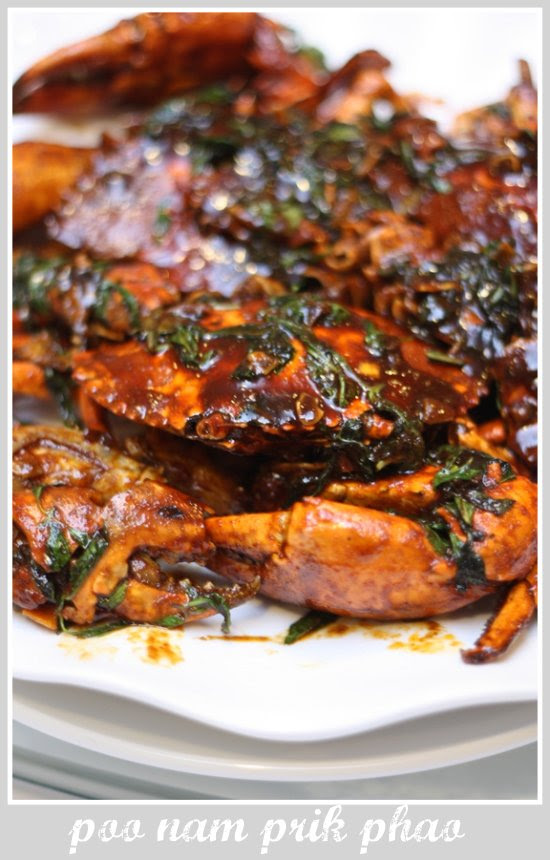 Then, it was a classic Thai dish, the tod mun pla (Thai fish cake). It's done beautifully here as each fish paste patty is juicy and bursting with flavour. Chopped long beans added a nice textural crunch.


Another classic was the yam pla duk foo (deep-fried fish with mango chilli sauce). Usually made from catfish, they had used siakap instead. No complaints as the deep-fried fish was beautifully light, flaky and crispy. It's Splashie Boy's favourite Thai item and he kept eating this "floss" like dish, drizzling over the mango chilli sauce that was more sweet vs spicy. 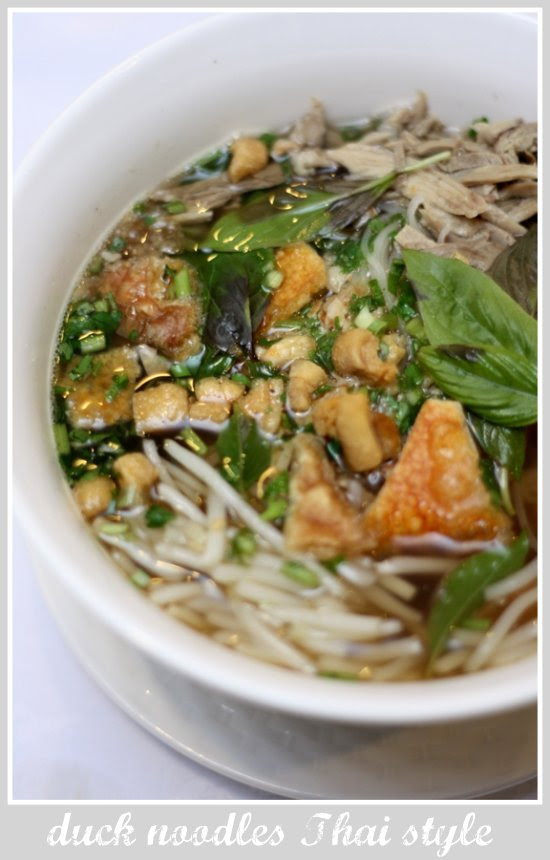 Our stomachs were groaning but we were almost reaching the end. I didn't expect it but the served my favourite food item, poo nam prik prao (crab with Thai basil and chilli). Local mud crabs were used so they had a sweet unbeatable taste that no Sri Lankan or Indonesian crab can ever imitate. It was again very aromatic with the Thai basil while the sauce was on the sweeter side. I wished I had more time to slowly pick through the crab but it was time for the piece de resistance.


Oh, I almost forget another dish not of the Thai genre but a preview of the BBQ menu. The full slab of juicy grilled pork ribs. Really good stuff that we had to use our fingers to enjoy each morsel of it. 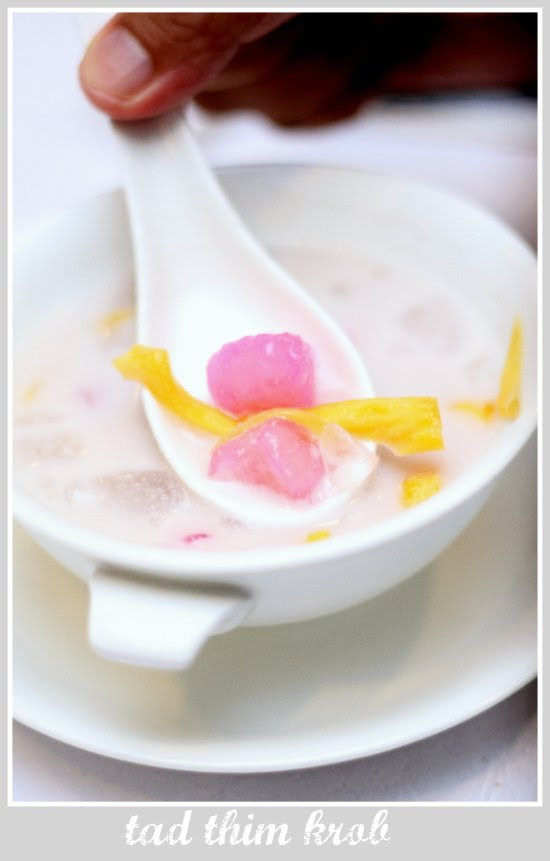 The dinner had started out as a request for Thai duck noodles, a specialty of the owner. Rather than just serve us the noodles, it became a full blown Thai meal.


We had left crucial stomach space for this dish and I'm glad we did. The broth was light yet fragrant from the pork and duck bones. It came packed with shredded duck, bean sprouts and incredible sin in the form of fried lard cubes and crunchy pig's skin. We also tried various noodles - the usual Thai kuey teow, Chef Choi's own egg noodles and beehoon. I preferred the egg noodles as it seems to absorb more of the broth compared to the Thai kuey teow noodles. Others had varying opinions. At one time, the room was silent from everyone slurping down their incredibly tummy satisfying noodles.


The meal ended with another classic, the tad thim krob (red rubies dessert) with water chesnuts and jackfruit in a coconut milk broth.

(Non halal. House next to Pelita Restaurant. More pictures are in my Flickr set. Remember to pre-order the Thai food.)

* This meal was by invitation from the owners of Chef Choi as a preview of their Thai food menu.

hmm, quite awesome to hear that. This got me craving for erawan. Had bad thai food at salem. :(

Oooh yummy yum yum! What was the dish that looked like raw fish?

Hmmm...any indications on the price?

does that look like raw fresh prawns in the 4th pic?!!

Sami.D said...
This comment has been removed by the author.
2:58 PM

tomj said...
This comment has been removed by the author.
4:11 PM

Interesting, Thai food in a Chinese restaurant and yet so delicious! How was the tad thim krob, was it good? The mains seem really worth trying out!

Thai duck noodles!! I want that! :)
Glad to see Chef Choi's new food items in their menu!
Somethin to return for!

Looks Thai-tastic! Should drag Unkaleong and Devil off to Chef Choi one of these days for lunch since we all work around the area. Woo-hoo! :)

Good choice, I think will try it tomorrow evening !