Dining Out @ Plan B, Bangsar Village I 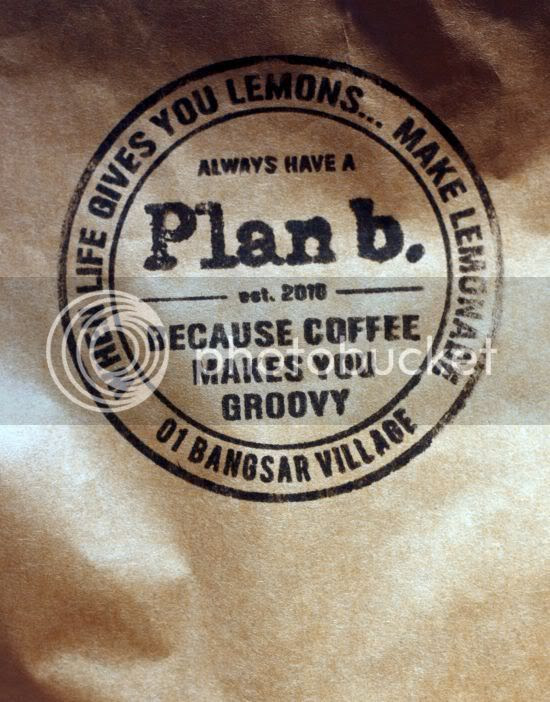 reminds us a little of Bread Shop rite?
Hold your horses everyone, ditch your plan A and opt instead of Plan B - the latest dining outlet at Bangsar Village I. Taking over the lot which used to house Theobroma Chocolate Lounge, it's a snazzy little place that has an industrial-like face with a touch of New York. Don't worry, it's not completely Americanised as it has Malaysian touches like old black-and-white P Ramlee movies on their big television screens and tummy favourites like Nonya Laksa, Nasi Dagang, Nasi Lemak in their menu. 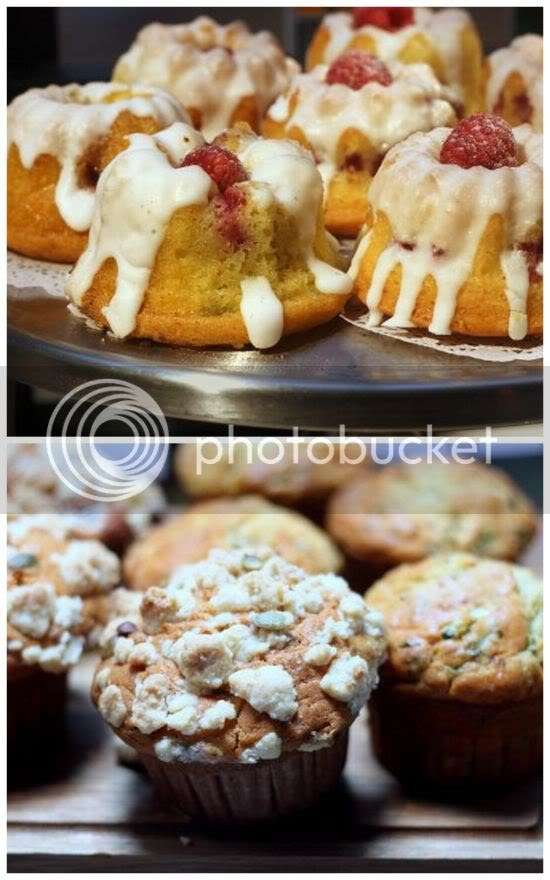 raspberry lemon meringue cakes, muffins
We absolutely lurve this place and I envision it is going to be our new hangout place in Bangsar. I've got fond memories about this particular space in Bangsar Village since it was originally Bakerzin, one of my favourite joints in town long long ago. You got to fall in love with a place that has such a wonderful tagline stamped on their take-away brown bags - "When life gives you lemonade...make lemonade" and "Always have a plan b, because coffee makes you groovy". I reckon, the owners aren't just going to stop at this outlet since it's a very good sign, they have labeled this as their first outlet. 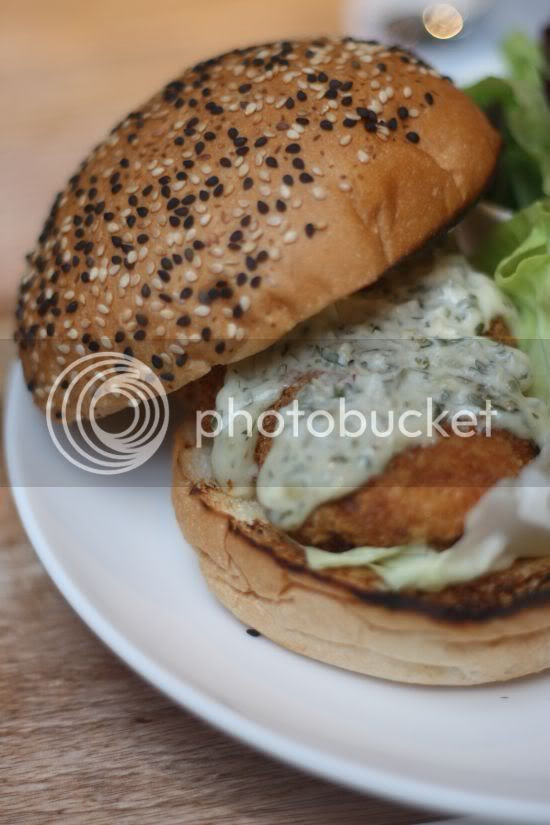 fisherman's catch
Before I get into the food (so zoom down if that's all you need!), a word on the interiors. It has an unfinished look with the unpainted cement floor and the exposed ceiling with the pipes. I love the industrial touches - the garage door entrance (that slides on top to save space) and the exposed lights. There's also a little old in the space with those round black flip light switches and old looking clock. Now all they need is a little grime on their clear windows and they'll really look like an old New York bistro. 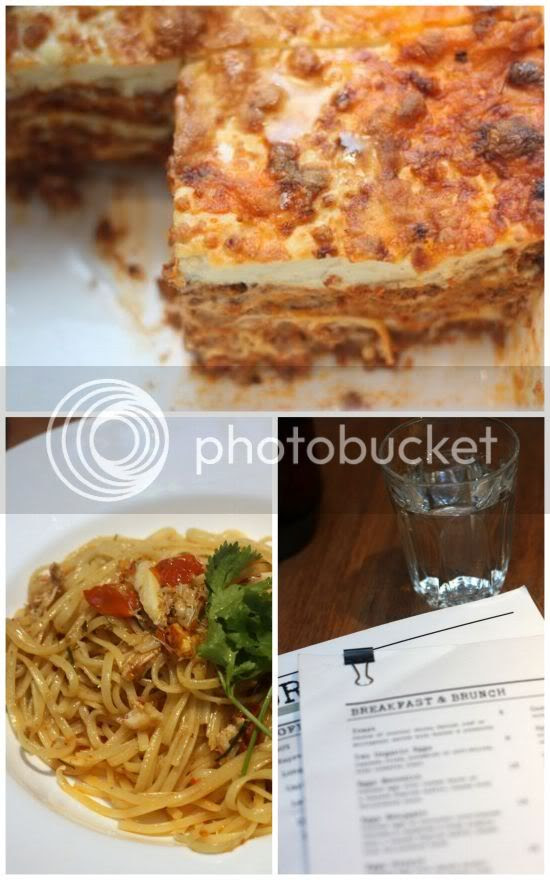 lasagna, simple menu with a dog clip, spicy crabmeat linguine
The interior is only part of the whole story as the food makes up the whole tale - all beautifully displayed on a long counter in stainless steel glass domed cake stands or wooden boards and their huge glass display cabinet. It's not hard to imagine noses and hands pressed against that glass oohing and aahing over the delicious display since that was what we literally went gaga over: cakes, muffins, bars and breads - the works! 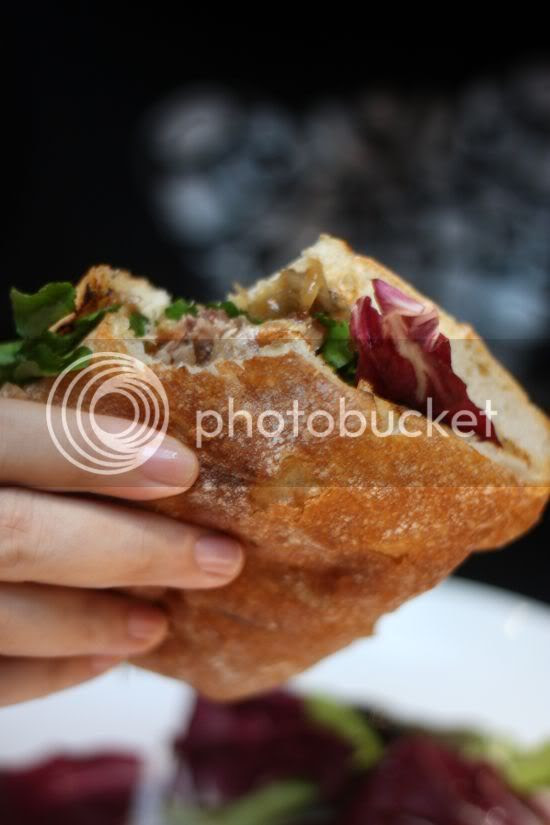 enjoying the duck confit ciabatta
For dinner, it was a mix of sandwiches and pasta. I lurve my recommended spicy crabmeat linguine (RM19) - a tomato based pasta aromatic from the prawn oil, lemongrass and kaffir lime. PL indulges in the wild mushroom linguine (RM18) with thyme truffle oil and lemon. Splashie Boy wanted to steer clear from meat (he was eating a huge Turkey Thanksgiving lunch the next day) so it was the fisherman's catch (RM22). He raved about the milk bun studded with black and white sesame seeds that sandwiched his fish fillet with its homemade tartare. A dash of lemon juice seemed to add an extra oomph to the whole ensemble. I like how they give unusual crisps with the sandwiches - sweet potato and yam ones. 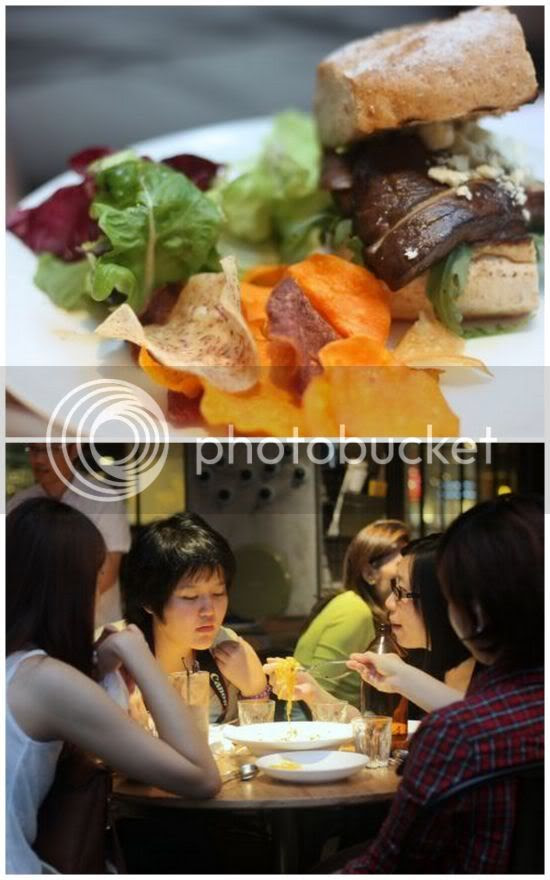 mushroom ciabatta, enjoying themselves
I got a taste of HK's roasted mushroom ciabatta (RM23) and loved the silky texture of the mushrooms. They ran out of ciabatta so instead they gave her a wholemeal bread instead. There's even a little pesto spread on the bread. J had a duck confit ciabatta (RM24) with caramelised onions that she thoroughly enjoyed. 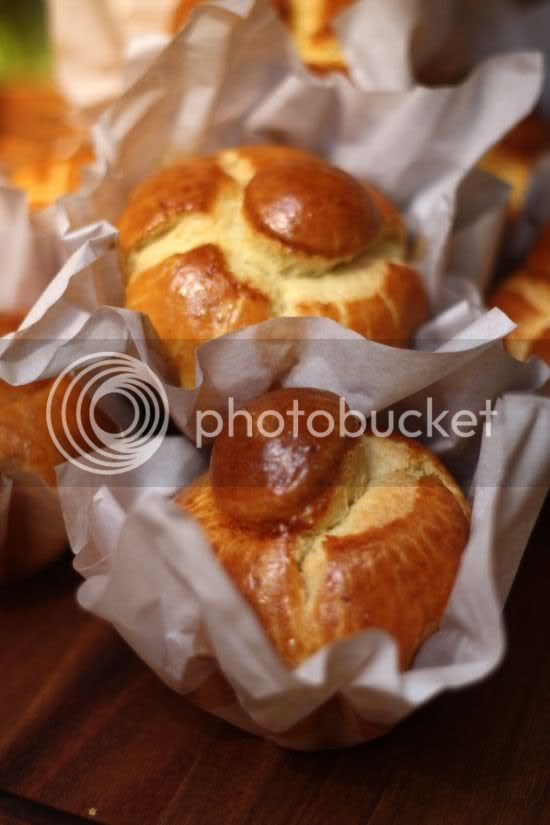 brioches
Once mains were done, it was down to serious business....choosing out desserts. Splashie Boy and J took up that task valiantly and returned with loads of stuff. The table was literally groaning from our sweet choices - lemon meringue tart (not too tart with a light crust), passionfruit tart (a little like a custard tart with very little passionfruit taste) and carrot cake (nifty in its baking paper folded cup and tasting like a homebaked one). 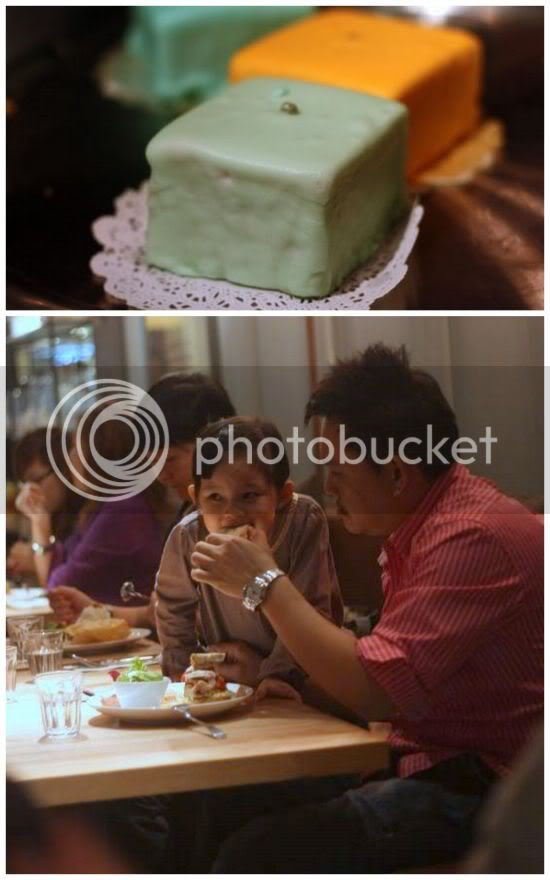 petit fours, yummy stuff
The winner of the show initially was the chorizo gruyere cheese muffin - a chunky one (fit for a brekkie!) with chopped chorizo sausage, tomatoes in a gruyere cheese fragrant muffin. Simply wonderful, we were all fighting for this. But coming out ahead like a dark horse, was the chocolate truffle tart - dense but silky to the tongue chocolate with a thin layer of biscuit crumbs to drive you round the edge of heaven. Decadent but so good! 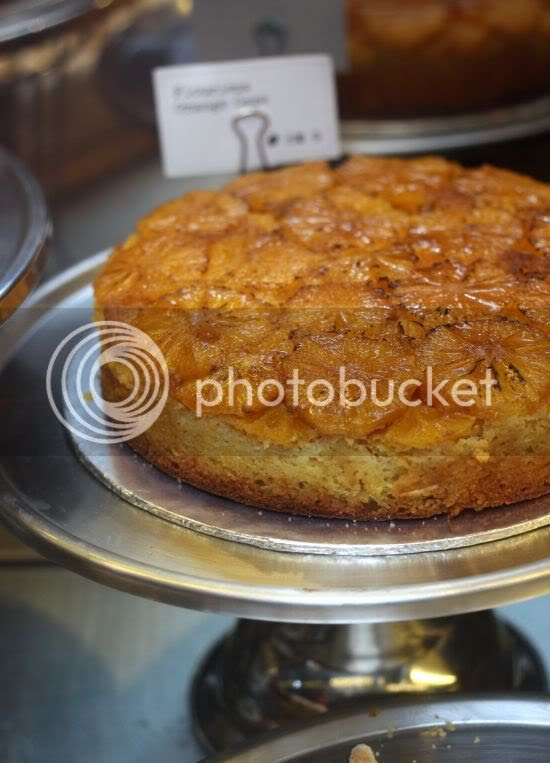 There's loads more to try I reckon, so we'll definitely revisit again and again. HK packed back an apple muffin for breakfast. She gave it her thumbs up the next day as it has a moist crumb after it was heated up. 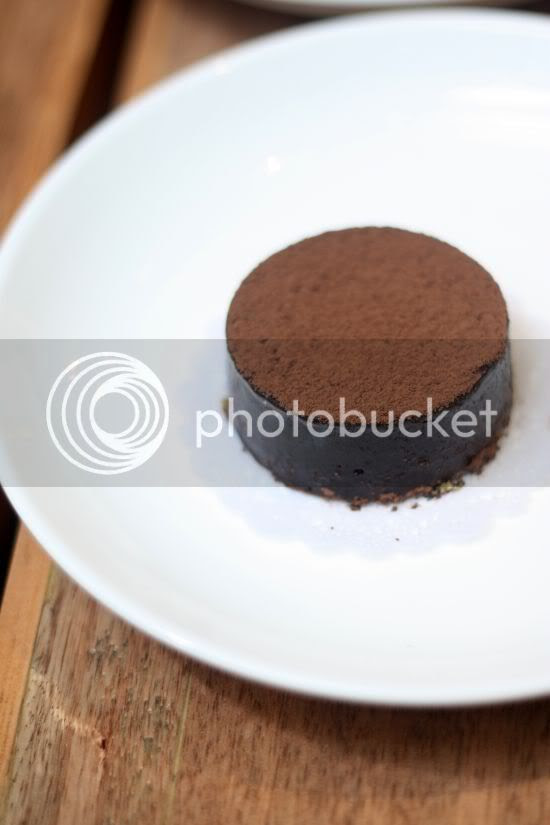 chocolate truffle
Judging from the crowd of familiar faces there, I reckon word is out that a great place has opened up. Hopefully they keep it up the standards as there's a whole lot of hungry people out there looking for a decent place to dine.
Plan B
Ground Floor
Bangsar Village I
Bangsar
Kuala Lumpur
(Pork Free. Open from morning to 10pm. Located opposite Starbucks in Bangsar Village I. More pictures are in the Flickr set.)
*Disclaimer: The opinions expressed here is entirely based on my personal tastebuds and may vary for others. This review is time sensitive; changes may occur to the place later on that can affect this opinion. The reviewer also declares that she has not received any monetary or non-monetary compensation from this place for writing the review.

Other reviews:
thenomadGourmand
Eat Drink KL
Posted by boo_licious at 12:08 AM

How lovely... Wholesome, unpretentious food with down to earth prices. And a "tete head" on the brioche to boot. Now I know where to head if I need a "fix".

PA - hope it gets yr thumbs up since it's at a place you know how to get to & don't need a GPS to locate.

Nicely toasted burger bun, good caramelisation on the orange cake...looks like they've got the basics spot on. Nothing pretentious, just doing the basics very well. Another big success story coming up.

Hooray! A good review from you and from Sean practically means this place is a gem! My next stop for brekkie & brunch. Yay! :D

This place reminds me of Earl Canteen in Melbourne.

At this rate, KL will be able to catch up with what is trending in Melbourne's food scene. :)

I've been reading some glowing reviews over the weekend and on tweets too, but this tops it all. I'm gonna make my way there today. A good cake would definitely be good after my appraisal later on.

wow, i love the look and the sounds of this place! would love to give this a try real soon!

Is that pineapple upside down cake? Lovely! I am drooling now and it is just after breakfast

easilygoodeats - I'm crossing my fingers & toes this becomes a success!

J - but u hve to work harder in the gym though?

Life for Beginners - makes a change from yr local hangout aka Jaya One. Hope u like the place.

Michelle - I hope we'll catch up as our dining scene is so boring.

qwazymonkey - awww, you'll ace that appraisal since u're such a talented monkey but cake always help to perk up Mondays.

Nekohime - hiya, u still in Manilla, that's a flourless orange cake, sorry forgot to label that.

somewhere I can escape from the traffic jam (compared to the major shopping malls)... yummy yummy!!!

Yums! I cant wait to head there again!
thks fr the link boo!

gosh your pictures are really good. you made the cakes and muffins looked so delectable!

arggggh! you r killing meeeeee.. why do u explain the food in such tantalizing detail.. why why WHY?!! LOL

hey, is it true that its owned by benjamin yong, who recently sold off his delicious steaks? (oops, i mean stakes).

yay! i tried this place today! it seems a lil busy but their was really good! especially the baked goods

after reading ur post, i took my wife and kid for dinner there last night. maybe ur tastebuds are different but we found the food dismal. the fisherman catch had overcharred buns you can taste the carbon on it, the patty waayyy too salty and the sauce negligible. the apple salad was ok though. my daughter had the nasi lemak which took like half an hour to make its appearance after numerous reminders and the rice tasted and smelt really weird, there was something wrong with the coconut milk. The sambal sotong was very hot and thats all we tasted, it lacked lacked depth and the fried chicken oily. I opted for something simpler, the egg sandwich, it was passable and the bread rather stale. The worst was the barley chicken soup. It looked like someone grabbed a restaurant barley preparation, throw some diced chicken and some random vege cubes and sprinkled a packet of maggi seasoning into it. We were very disappointed as normally your recommendations came out tops.

It is great having this nice outlet serving snacks, coffee and cakes. Remind me of those good times in Brunetti, Melbourne.

this does look good but i have heard some contradicting reviews on this place so I guess have to try first to conclude. Heh.

Went there a few times with friends. It's still in early days, as quite a few items on the menu are "not available"

Yes it's owned by the people who started Delicious. To digress, now that the Delicious brand has changed owners, does anybody notice the change in quality (i.e. portion size, service, overall quality?)

i think Plan B is from the same founder of Delicious... i was there yesterday and i saw quite a number of familiar faces on their staff team which were from Delicious BVII.... and don't you notice that the items on the menu are similar...?

Thank you for the review! Love the feedback. It is always good to know what we are doing right. Your review has been very encouraging! Thank you!

Just to update you: Plan b is now open from 8am every day! So do pop by if you are looking for good morning cuppa.

Plan b by BIG

Sorry, but lights,cakes and coffee?? Too much of The Bread Shop and Whisk combined in one place dontcha think? and no pretense?? lol Come on! Not original and food and service was pretty bad for me. Sorry, just my two cents! I love your reviews and most of them are usually spot on, but I just thought the people at BIG were trying too hard to capture the New York Industrial essence(I lived there for a really long time) Since Bread Shop and Whisk, I feel like every outlet is trying to "go back to basics" Come up with something new please and be a little bit more creative. Perhaps a Plan C :p

hehe, i plan to invite my dear to go to try plan B on this saturday after i read this blog :) the cakes n desserts r so attractive ^^

Might try the place this weekend. Hope it's as good as it sounds. It's so hard to get good food that's worth the price. I may be a bit of a bumpkin when it comes to food. Hawker food, old kopitiams, tai chau food rarely disappoint. But for others, well, I feel like I'm paying for ambience and air-con.

I must add though that Delicious has been pretty consistent with their food, so that's one place I'd go back to. Changed owners? That's news. No wonder their magazine lasted two issues only. I loved it very much.

homg ur post totally made me lose my ability to control production of saliva... everything looks so good! the desserts especially! ur blog is the super awesome! =D