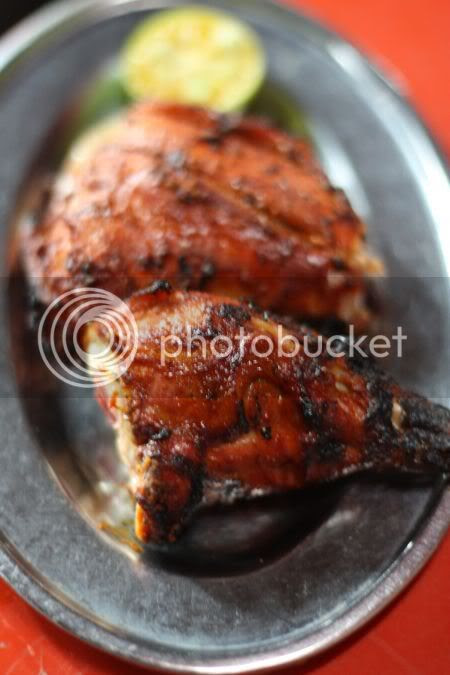 It amazes me that I took so long to discover this place, which I reckon serves the most amazing tandoori chicken and fluffy soft naans. A little bird gave me a hint of this place last week and after watching Sherlock Holmes on a Saturday night, we headed there on a quest to search for this stall. With vague directions like "near Ampang Point" and "next to guitar shop", we set off in a wild goose chase. Splashie Boy was good humoured enough to drive around Ampang looking for it but after a while, we almost gave up hence the next best thing was to google for directions. Hallelujah for 3G services!!! I stumbled on Fried Chillies' directions and after a driving through a dark curvy road, it was tandoori and naan nirvana at the end! 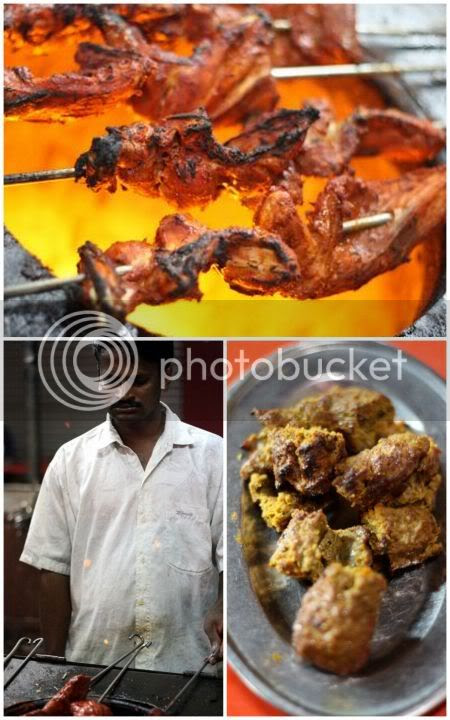 1. Tandoori chicken skewers on the oven, 2. mutton kebabs. 3. The grill master at work
Nicknamed Uncle Arumugam by the Fried Chillies team, this stall seems to be working non-stop fulfilling orders. To spot the main man, zoom in on a tall fella with the cap. He's the person you need to place your orders with as most of the others tend to ignore you. (I suspect they can't speak the language) Seems he used to work in a Northern Indian restaurant where he picked up his skills. He doesn't do the grunt work anymore, leaving it to his workers to handle the making of the naans and the grilling. 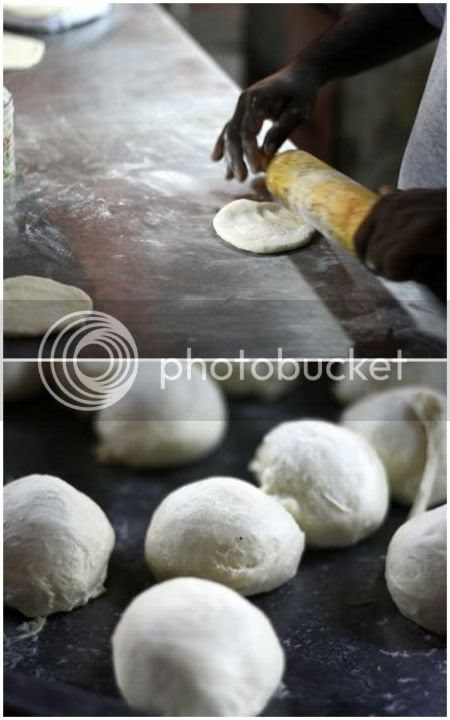 1. dainty fingers flatten naan dough. 2. balls of naan dough waiting to be flattened
The grill master - this stoic looking fella looks after two tandoor ovens fueled by a charcoal fire, moving metal skewers from each oven until they're cooked to juicy perfection. I love the way they make the naans here, transforming from the balls of dough into fluffy soft naans with crispy edges. Once the dough is stretched, it's placed on the side of the tandoor oven. Such dexterity to place it quickly at the sides without burning any of their extremities. 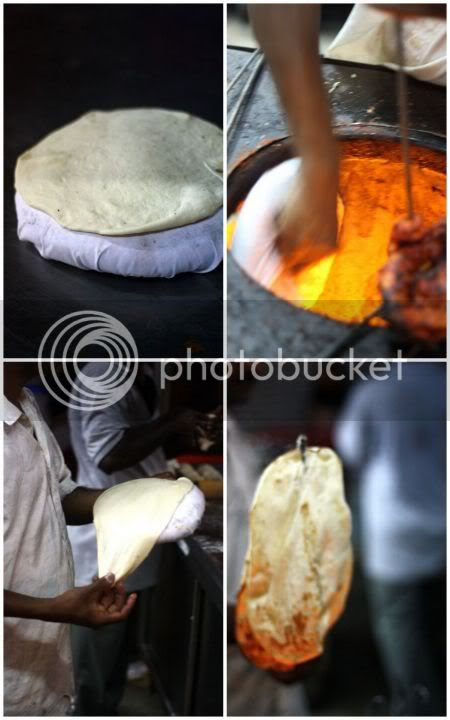 The making of a naan from flattening, placing it on the napkin and tandoor oven before being taken out
The wait is a little long but we're rewarded with juicy and succulent tandoori chicken that we tear with our fingers. As it was late, they weren't serving any keema (my favourite with peas) hence we went for the mixed vegetables. Simply gorgeous stuff - diced carrots, potatoes, mixed vegetables in a creamy sauce that had me scraping the stainless steel dish to get everything down my rumbling tummy. 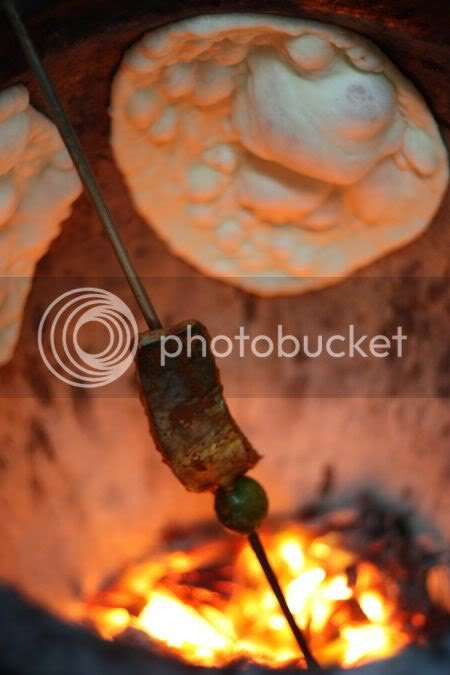 peek inside for what is going on
The tandoori fish - a piece of tenggiri fish cutlet wasn't as juicy as the chicken but nevertheless it was still enjoyable especially after a dash of lime juice from the halved calamansi lime on the side. The mutton kebab was also fantastic especially eaten hot from the oven. 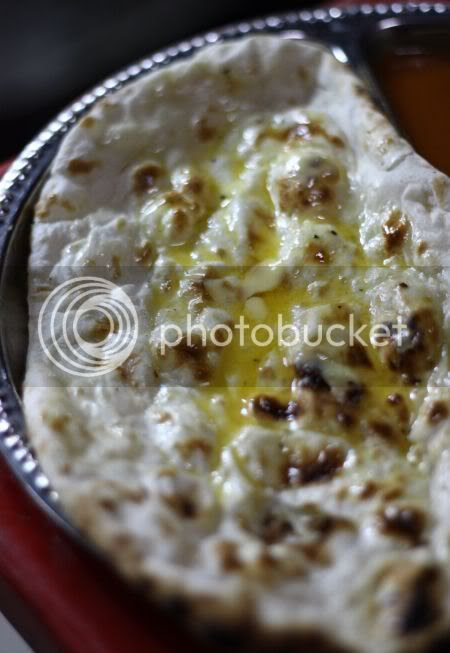 fluffy soft heavenly naans
However our favourite were the fluffy naans - not rubbery but so pillowy soft, I could eat them the whole night long. We had two types - the butter and garlic but we preferred the sinful melting butter version that screamed "cholestrol!". Other varieties available are cheese naan and keshimiri naan. Not being satisfied with just one each, we ordered another one to share and slowly waited for the additional naan, since it takes a while to get one made. 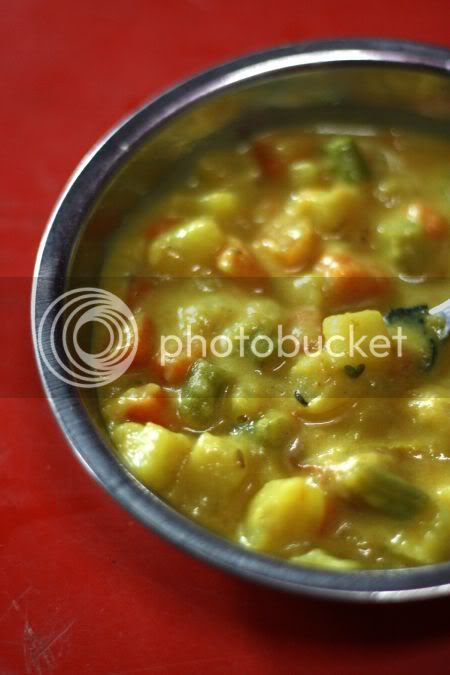 the simple yet finger licking mixed vegetables
Thus, if you're looking for a little piece of heaven, drop by here and satisfy the tandoori and naan cravings. The place may not be the cleanest nor the most elegant but hey, this is what street food is all about. Service can be quite lacking especially if they're busy but press Uncle Arumugam for your order and it's well worth the wait. For more pictures, see my Flickr set.

(Halal. Open from 6.30pm till 1am. Rest days are not fixed. To get here, pass Ampang Point shopping mall, take a right at the first traffic light, go staright and follow the curve of the road through the housing estate to lead you back to Jalan Ampang. There will be a row of stalls tucked at a corner on your left hand side, next to a row of shophouses facing Jalan Ampang. The stalls are also near Empire Furniture Gallery and SSF. Tandoori stall is at the end nearest to Jalan Ampang.)

Tagged with: Tandoori+ Naan
Posted by boo_licious at 12:55 AM

Sounds good from you, I have already marked for a try there. Thanks.

Hard to find but worth the ride! ;)

this place is awesome. its called arumugam apparently (well that was what ppl told me when i blogged about it almost 2 yrs ago)

wow, y'know, i never actually knew what a tandoor oven looks like. i always kinda assumed it was like those brick-oven ones for pizzas! :D

I love your shot of the mixed vege! You went that close to the tandoor? I think I would have melted. =P

Aisay, should have called me for directions! ;) It's a favourite haunt for me and my girl. We just love the mint sauce too and keep on asking for more!

omg i read ur post n had to have it! we went by lastnite and got into an accident w a motorcycle on d way- but d naan made up for it- its not gonna pay for d dent, but it def helped :)

OH MY GOD!!! I want entry to this nirvana! U be my GPS ok? Next time we go together gether.

Gorgeously juicy chicken and fluffy naan?! Wow....
Brought back memories of a tandoori outlet in Penang way back then, when we were students. The cheese naan was heavenly.