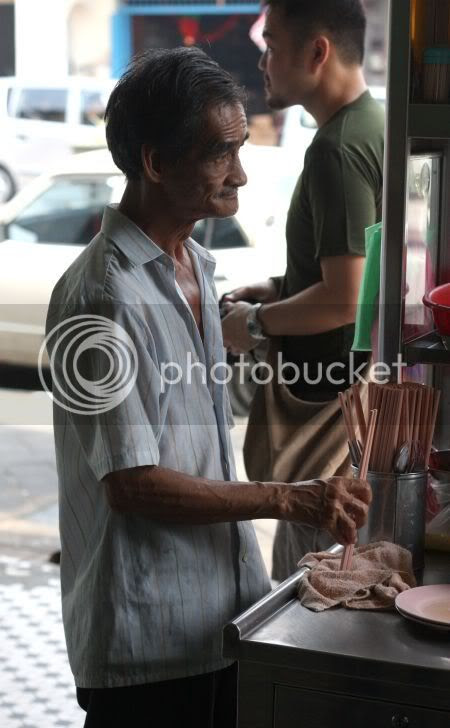 an unexpected picture of contrasts....

Ever been faced with the dilemma of having too many great pictures? For the recent Penang trip. I managed to capture such great scenes and food (of course) that editing and choosing which ones to publish in the blog, took so much time. Every shot seemed to deserve the limelight - like the first one, a very unexpected shot of Hairy Berry and this old uncle in an amazing char kuey teow stall, we were taken to. The old uncle's face was etched with deep lines and he carried himself with a quiet dignity to him, not blinking or even smiling when he took pictures of him. 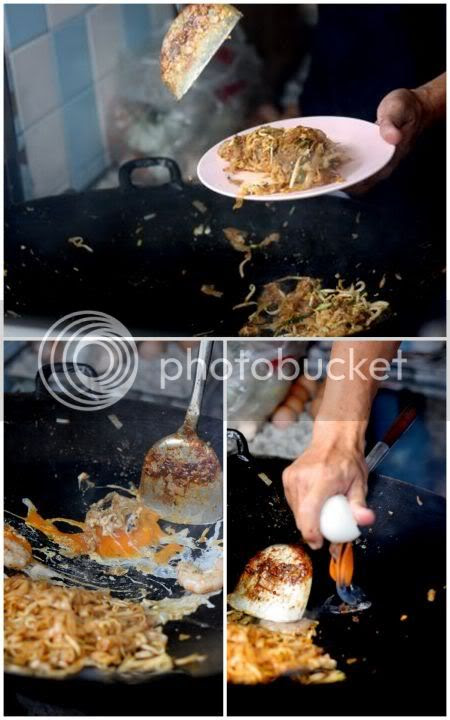 how to create an amazing char kuey teow with duck egg

Back to the food, that remains a wistful memory to the tongue and tummy now. Our unofficial tour guide aka the Le Cordon Bleu chef brought us to this small unassuming corner shop flanked by coffin shops along Lebuh Carnavon. Here we discovered char kuey teow, the way we like it - fried dry with loads of wok hei, juicy prawns and duck egg. Like many stalls in Penang, this one is now run by the third generation and luckily for us, relatively unknown but still very much a gem to be cherished. 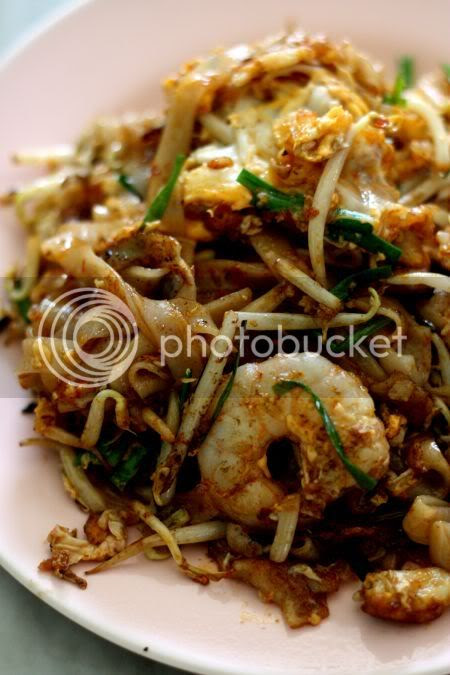 Other goodies we discovered here were the koay teow th'ng served with duck meat (just like the locals like it but oh so difficult! to get in the Klang Valley). I loved the simple yet tummy-satisfying kuey teow soup with strips of duck meat and a side order of tender melt-in-the-mouth duck breast meat. 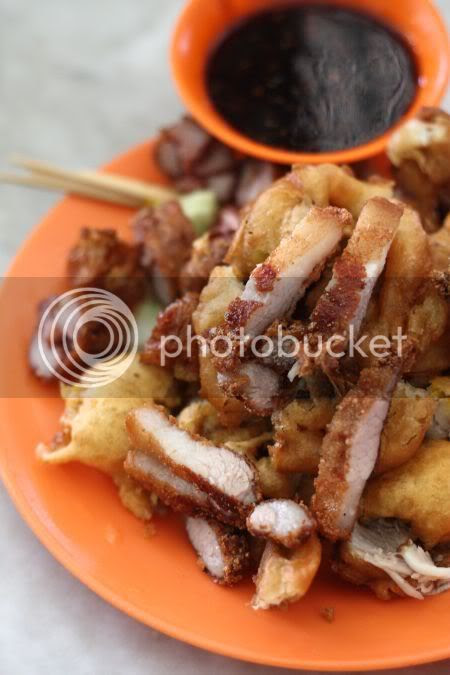 The lorbak is also delicious - fritters stuffed with various items including chopped squid and meat that are super crunchy and freshly fried. The fritters are so good, we finish chomping down the crunchy delights quickly while dipping it in the thickish brown sauce. 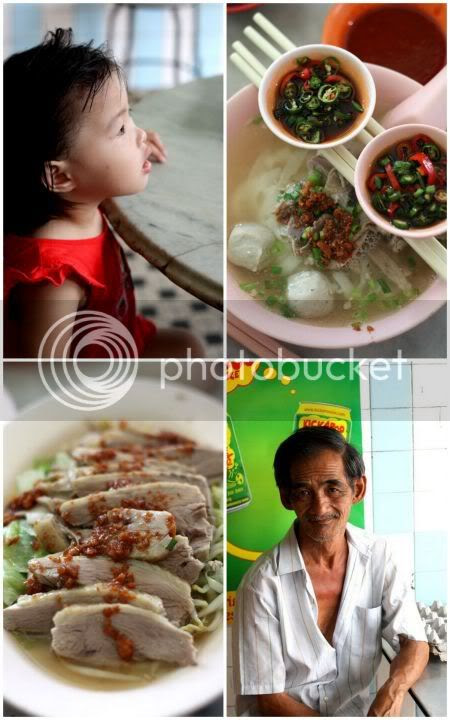 tummy satisfying kuey teow th'ng with the characters from the coffeeshop

Not only is the food great here, it is also an excellent place for pictures with its old style wooden booths, black and white tiled floors, stainless steel chairs and the people dining here. More pictures can be found in the Flickr set. 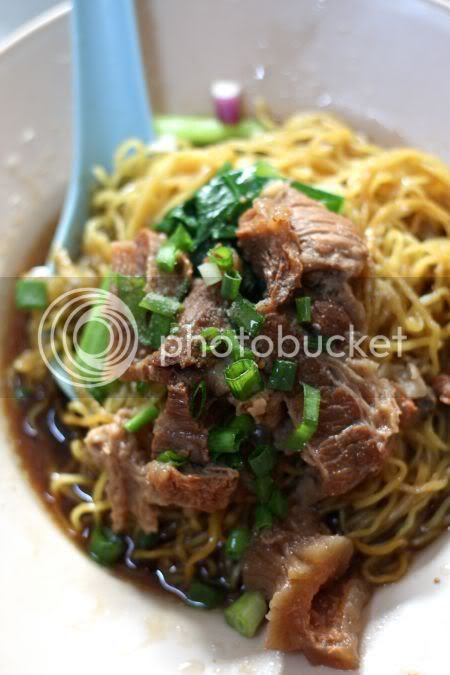 Weirdly enough, one of the items we ate quite often were wantan noodles. It is weird, since Penang is mainly Hokkiens, but there seems to be quite a group of Cantonese making their noodles here like this old-school place around Chulia Street. 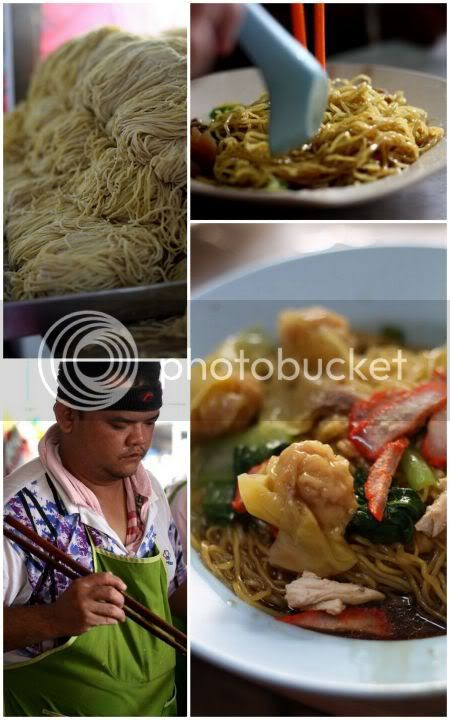 Peppered with budget hotels and hostels, Chulia Street definitely has its fair share of tourists - I kept spotting people with large DSLRs traipsing down the streets. This particular stall is often a popular hangout with foreigners who have discover this small place after thumbing through the Lonely Planet guide. 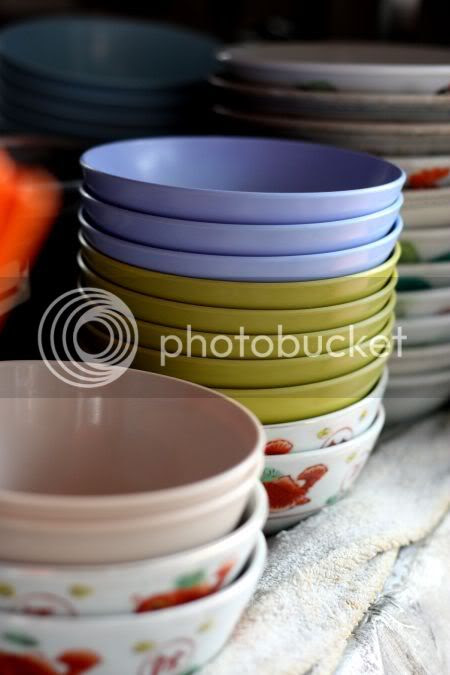 bowls waiting to be filled

Another old style place, this place is well known for its springy noodles and of course, its long history. Seems the stall started out as those mobile vendors popular in the olden days where they will move from house to house with a bamboo stick. Known as "tock tock mee" sellers, the original stall owner would tap on the bamboo with a stick to announce what they were selling to others. 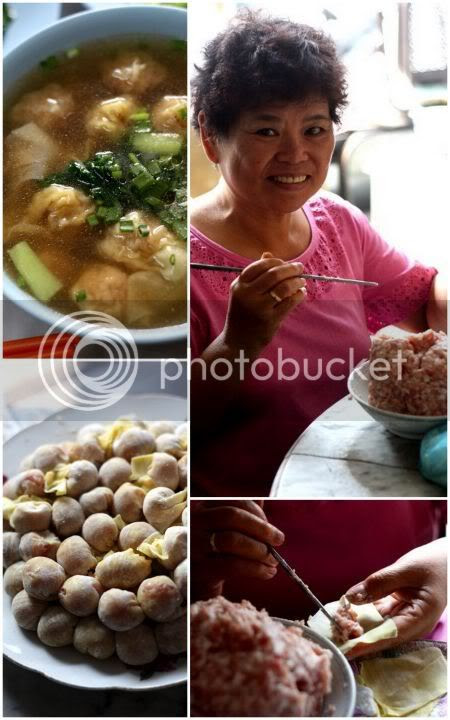 wantan-logy, done with a single chopstick and tighly bound

Now run by the third generation, this Cantonese family sells springy wantan noodles with either beef tendons or the typical char siu and wantan toppings. While I didn't care much about the red tinged char siu slices (old fashioned but not so great compared to the sticky dark ones we are more accustomed to), I love the springy noodles and the tightly bound wantans. Made only from minced pork, these were delish with a silky smooth skin surrounding the juicy goodness. Best of all, you could see how they made the wantans - full of concentration with a single chopstick to help bind the wantan sheet tightly over the mound of minced pork. For more, read Lots of Cravings blog post on this place.

arr! u beat me to it..was going to upload and blog about it this morning..so i decided to put it into drafts.

Evil is the person who tempts ppl with photos of yummy food that is >300km away. :(

That's a first - char kway teow with duck egg! Must be delicious! This year haven't balik Pulau Pinang yet. Oh how I miss you Penang.

my goodness, you went to sai lam, that the place where my in-laws used to be during the 60's & 70's. I love Penang street foods...

i'm not sure i've ever had ckt with duck egg... does it give the ckt a saltier or more aromatic taste?
hmmm at first, i thought the symbolism for the first pic is that hairy berry might look like that older gentleman in 30 years or so ...

Good God, you really captured the essence of hawker food really well there!

thats it! i have to drag hubby up to Penang the next time we come home!

Wantan-logy hehe! Deserves a faculty all on its own at great universities around the world! I need to go back PRONTO!

i come in here daily, and everyday am here with a same thought - i hate you! yet a i love you so much ... i love those food, i love those pics ...

Luv 'em stalls. But seriously, u guys had all tht over ONE weekend??

never bothered with Penang's wantan mee, as countless bad experiences had me wary.

but the CKT at almost every single stall there, seems to scream :
EAT ME!

it's definitely difficult to find one as good as Penang's version, anywhere else.

woot. just in time... still in penang for work for another 2 days. i shall go hunt down these places. lol.

i agree la, boo. that the old-skool kopitiams are great for photography. the characters there are amazing. and the food's good. stingray in the lor bak! that was a first for me.

looks too damn good for words! i agree with J! evil.. 2tempt us yes. LOL :P

oh the ones you had looks drier as you said!
yes, this is a relatively unknown gem but nevertheless satisfies the craving for ckt..especially when fried with duck egg :)

I think the look of the duck egg being pour into the wok. Orange is a nice colour *slurp*