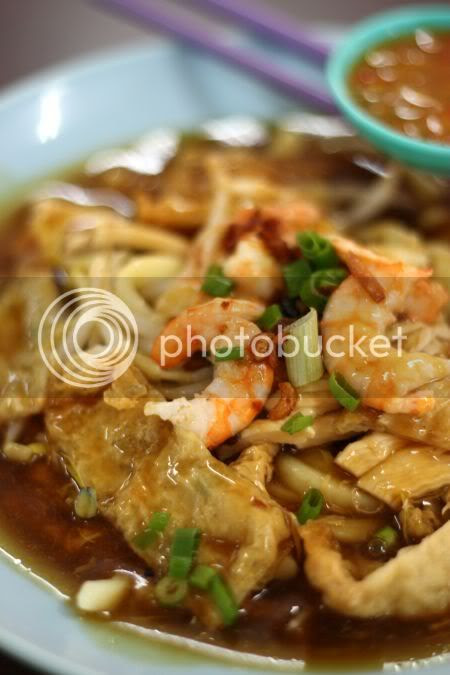 A quickie post, as I realised I am super dead tired after a long day fighting with traffic, crowds in the mall and etc. I have been faithfully ticking off places to try from the same guide book that led me to the wantan mee place. Next was the Lam Mee stall at Restoran Mei Sin, Imbi. To be honest, if the guidebook didn't mention they sold Lam Mee, I would have ignored that stall as it seemed to be more popular for its curry mee.

While the Lam Mee didn't wow my tastebuds for me to call up the whole world to try it out, it was still pretty decent stuff. What I liked about it - it felt very homey and luckily, not overdosed with MSG. The chili sauce served with it was suitably sour and spicy, adding a needed kick to the noodles. Overall it was a decent bowl of noodles to partake, if you are around the area. However if you plan to specially make a trip here, I suggest May King at the busy streets of Pudu instead as despite the commericalization of that place, the noodles taste much better there. Read about other stuff from Restoran Mei Sin here.

And since we are talking about Lam Mee, has anyone tried the new place at 1 Utama, near Kluang Station, called Lameeya (I think)? Looks interesting but it was super empty today while Kluang Station was packed with people.

re lameeya, kluang station is not that great right? so... if lameeya is empty then .. but maybe it's coz it's new! I haven't tried it yet but maybe soon since it's near my office.
i know what you mean about the msg in thick soup like lam mee. 2 days ago i had sanghar mee.. 10 mins after i finished up the soup, i started feeling sick with a tight feeling in my neck! MSG really sucks man ! Some ppl are not sensitive to it though.. lucky them

ohh i love the noodles drenched in this sauce..dip the fried stuff in there too..

Food non overdosed with MSG is always a treat these days!!

Hhmm.. I guess I know which shop you're talking about. I like the Lam Mee but the price is a lil too expensive for the portion they are serving.

Looks ordinary. I prefer more garnishings and colour. Good news on the MSG though.

There's a guide book? Where can I get one?!

u can produce book maa...

I love food too and I like to share link with you, I hope we r cool :)

MSG is actually acceptable.. of course, with the exception of MSG intolerant people... the key is always moderation.
I'd just opened up an account here... finding it easier to post blog here rather than in facebook. Anyway, been reading your blogs from time to time in order to locate the best place to eat and drink... lol!!!
Do drop by sometimes...

By the way, there is a Lam Mee stall located in Taman Yulek under some low cost flats.. apparently their prawn mee and lam mee are rather famous..

What GUIDE book are you refering to???? I need one when I come back to KL on vacation in Jan 09..

I plan to eat for 3 weeks straight ... so a book will be a great help or I can just print your blog in book form!! LOL

Oh, I passed by a few times when it's still under renovation. Will go and try it out when free. lol

i love MayKing's @ Pudu. this MeiSin ar... i wonder if i have tried before?!

Your photos are gorgeous! Even simple food like lam mee is made delicious from your photo :) *LOL*