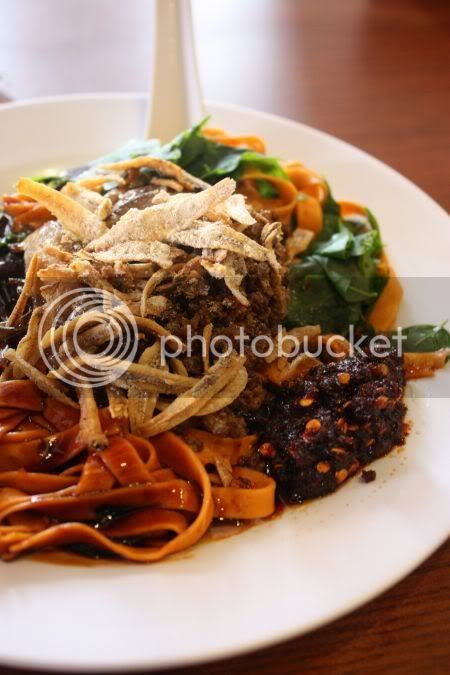 Feeling adventurous yesterday, I wandered into Puchong for a meal. I have been reading quite a lot about the various pan mee cafes in Puchong. There's one cafe serving pan mee with unsweetened soy bean milk, another one serving it with a thick broth like loh mein and this particular place that serves various flavours of pan mee. 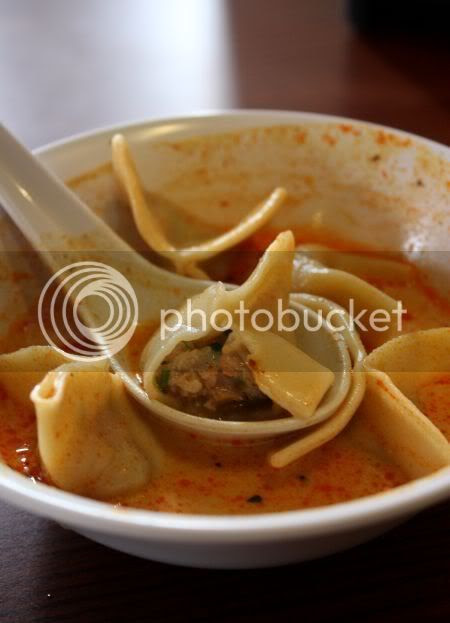 dumplings served with laksa broth (6 pieces for RM4.80)
Located in between Old Town Kopitiam and Grill King, Golden Egg Noodles serves 12 varieties of pan mee. The golden term for the egg noodles seems to refer to the pumpkin flavoured pan mee. Other pan mee flavours are also available: seaweed, chili and coriander. Most of the dishes use the pumpkin flavoured pan mee, but you can ask for the different flavours at an extra cost of 50 cents.
Aside from the usual dry and soup version, they have pan mee served with Singapore laksa broth, seafood clear soup, pork slices and curry chicken. There is also pan mee fried Hokkien or Kam Heong style. I decided to try their dry chili pan mee version - chili flavoured pan mee topped with minced meat, sliced Chinese mushrooms, wood ear fungus and blanched sayur manis leaves. Deep-fried ikan bilis top the noodles, which is served with a generous dollop of dried chilli sambal.

While the flavour of chilli in the pan mee is not distinct, the noodles was quite tasty with the generous amount of minced meat topping. Unlike Kin Kin's dried chilli sambal, this version was grinded finely and not as spicy even though it had a lot of chilli seeds. I suspect they added sugar as it was sweet. Aside from the dried chillies, I reckon a little dry prawns was added to give aroma to the sambal. Even though the noodles was quite tasty, it can be quite oily. I guess the oil is what they toss the noodles in, to prevent it from sticking together. The dried chilli sambal also emits oil, hence you will find a pool of oil at the bottom of your plate after you finish your noodles.
I also ordered the laksa dumplings, which is essentially dumplings stuffed with minced pork and vegetable and served with the Singapore laksa broth. The taste was not bad, but I felt it was a little pricey at 80 sens a piece.
Overall, I thought the food was pretty good and wouldn't mind returning to try the other varieties. The place was packed during lunchtime, so business was very good. If you don't fancy noodles, they also serve rice dishes including fried rice and etc. For those snap happy people, be warned though this outlet does not encourage photo taking at all - there's a no camera sign on their front door.
Golden Egg Noodle
23-01, Jln Kenari 19A
Bandar Puchong Jaya
Puchong

Tel: 03 -8076 9749
(Non Halal. Open from 8am to 11.30pm daily.)
*Disclaimer: The opinions expressed here is entirely based on my personal tastebuds and may vary for others. The reviewer also declares that she has not received any monetary or non-monetary compensation from the restaurant for writing this review.

It is really mouth-watering!!! I have not tried pumpkin pan mee before...must give a try!
Thanks for the cool sharing!

Sounds interesting but too bad with the no camera sign.

The most sickening part where no camera allowed...

oh, but you managed to take the pictures? ;p. the laksa dumplings looks kinda weird..maybe not used to seeing dumplings served this way

They were not aware of you snapping away? Hehehe. Notti notti!!

ling239 - yes, dumpling skin thick, that is why I think they fold it like these. Also easier for those who can't pinch the skin properly.

mycoffee - a lot in Puchong! All modern cafes with new fangled ones.

sc - I did it very annonymously and quickly. since the sign was for the inside of the restaurant, I sat outside.

...submitted as a 4 star review on golden-egg-noodl

I had my meal there too and found a rusted metal in the bowl!

After reading it,i tried this recipe at home.its love to have it,i made the same presentation as u mentioned here.dumplings looks so yummy to have it.

I think this food is pretty good and will not mind returning to try the other varieties. I will try to made at my home.