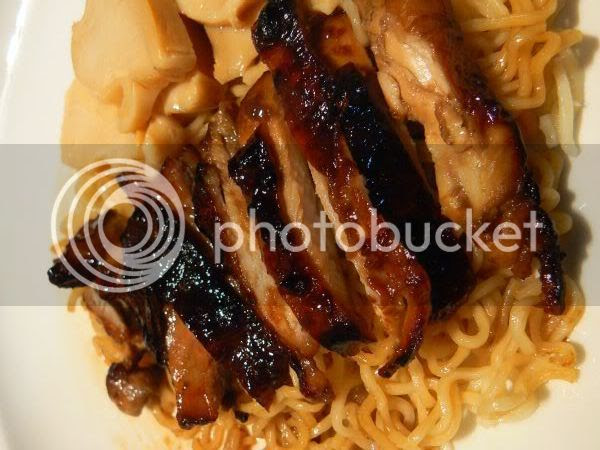 Chicken char siu and abalone on top of Maggi instant noodles
Recently I had 2 cans of abalone to finish just before their expiry date which is this month. We just used it in a simple manner i.e. as a simple topping for noodles and porridge. I understand some people do use the canned liquid for cooking but my mother has warned me against that, since she reckons it is full of preservatives. 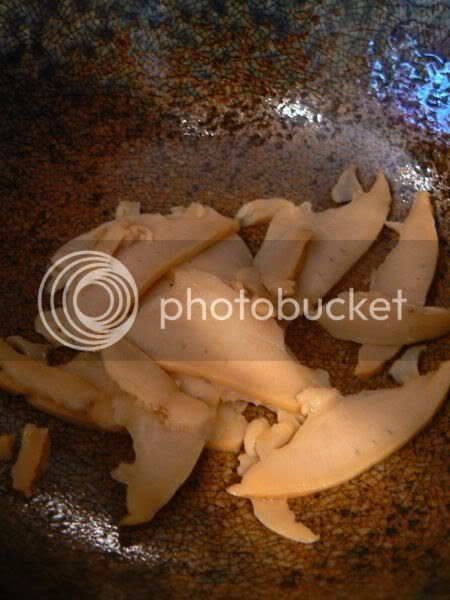 Sliced abalone
I decided to try and make the chicken char siu I learnt from the Cooking House with Fatboybakes, Precious Pea and Lyrical Lemongrass. It was pretty simple to make and I made a few tweaks to the recipe - crushed garlic cloves vs garlic pips, more chinese wine, brown sugar instead of white as I couldn't find any around, a drizzle of honey and less time under the grill. Instead of the recipe's half and hour, I only used 15 minutes because the boneless chicken thighs weren't as big compared to what I saw demonstrated. 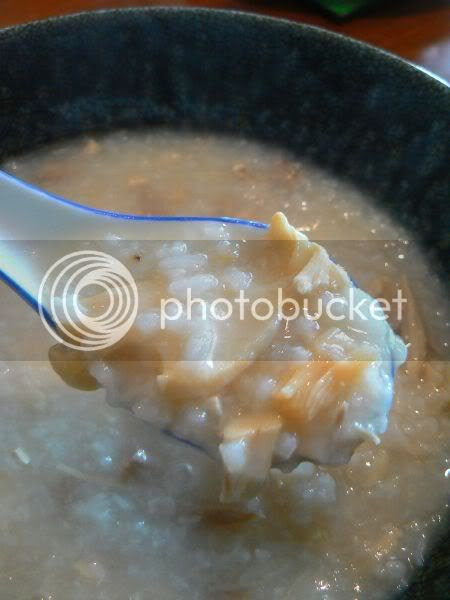 Chicken and abalone porridge
I thought it didn't taste as great as the one in the Cooking House because the meat she used was much thicker hence it was juicy. I had burnt bits on my chicken skin as I drizzled honey. Maybe next time, I'll use bigger chicken thighs, a lower heat and less time to get the texture I am looking for. I paired it with Maggi instant noodles as we couldn't get any wantan mee from KLCC, where we were earlier on and sliced abalone from the can.
Earlier, we had used one can by cooking chicken porridge at my mother's place. Very nice when combined together as she had used one whole chicken to cook the porridge. She had a bit more patience than me as she sliced the abalone thinly. Hope all this gives you an idea how to use up the abalone, which seems to be a common gift during Chinese New Year.
Posted by boo_licious at 9:15 AM

High 5! While i was shifting house, I found 1 can of abalone from last Chinese New Year. Luckily, not expired yet.

Only you can make maggi mee look good lar.

haha..i also have 2 cans from last year...and we're gonna use it as an ingredient for the soup...other stuff that we put in include black peppercorn (lots), dried scallops, black chicken, wolfberries and pork stomach...

The chicken charsiew looks good cos im not a pork lover.Haha.
The abalone porridge is an indulgence la...

what a luxury! if only someone were to give me some abalone for CNY too.. LOL

hahahaaa... i tot abalone is best cut into triangles (in cantonese: chit kok) ? to get more chew out of it...^_^

That's an unusual combi .. expensive ingredients over cheap ones. Well, there are no rules against that.. in fact, many years ago, when abalone used to cost unde rm10 (yes, I am that old!!), I used to eat slices straight from the can! By the way, the juice is only brine .. ie. salt water ... salt alone is a good preservative.

I love how your porridge turn out so white, and fine. I can never get my porridge this way. Abaloneeee ... oh yummm! I wanttttt!

seriously your maggi mee looks so gourmet it's not funny. Gorgeous!

precious pea - yippee, u can feast on abalone this CNY. Mine is left over from 2 CNY ago. Had to finish them ASAP or else expire.

Yammylicious - am sure yr mummy will make u some.

Jojo - mine's burnt and not as yum as the teacher's version though.

daphne - I reckon no one will ever give me abalone ever again as I take forever to eat it!

ling239 - hmmm, no idea but now u mention it, it shld look like the way they cut in the pun choy place.

hazza - thxs for the tip on the brine but I don't dare risk getting hypertension though.

imbi and itchy - my mum's secret as she's the expert chef here.

the peenut - hee hee, I kinda love Maggi Mee as it's so simple to make.

wow. I always thought instant noodles are dump cabo only so I always add some veg/egg. Yours definitely in another class ;-)

You certainly have the patience to prepare the toppings for the noodle :)

This is one of the most expensive maggi mee dish I had ever come across! Gong Xi Fatt Cai to you and your family!

Happy Chinese New Year to you!! Wishing you all the best. Stay healthy, wealthy and happy!

wawawawawa!! The chicken char siew look so so so good! It must b the type of char siew i like !! Gong Hei Fatt Choy!

Abalone and porridge is so fancy! I have actually been looking for abalone where I live in the USA (400+ miles/700+ km from the ocean) but there is none to be found. I will not look for canned, I have not thought of that before.

Wenching - Thxs and Happy Chinese New Year to both of u.

Jackson - not as good as the ones in Shah Alam though.

Lannae - we survive on canned ones though as I can imagine fresh ones will cost a bomb in Msia.

I read your blog on a regular basis and was wondering if you would be able to email me your recipe for the char siew chicken? I study in the US, and it's hard for me to get the right kind of pork to make char siew, so chicken would be a good alternative.

Hi!
Your char siu looks so yummy! I wonder which part of the chicken meat was being used. Is it possible to share your recipe?
Thanks!
Asty

Thanks for the recipe!!! Love it. Fresh or frozen local abalone is cheaper but will never give the same taste, flavor and texture as canned abalone. I love the flavor and taste of canned abalone and one day I want to eat abalone like 'abalone kings' do: braised in sauce and served whole, like a steak, washed down with a good white wine. Cut with a knife and fork of course. Meantime, it's still cheaper to slice abalone thinly and share with the family. I love this dish. It's such a special treat