Claypot rice is a favourite of mine and sometimes I just hanker for something different hence I head on to Busy Corner just off Kolej Damansara Utama for my fix of rice and soup. 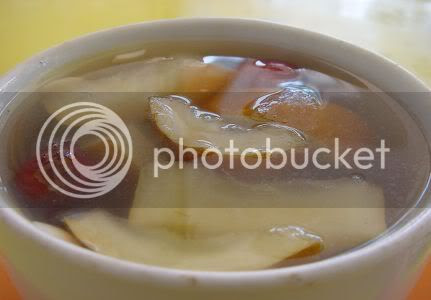 The shop only sells claypot rice and steamed soups, a perfect combination as one can drink soup with their rice. I ordered an old favourite, the old cucumber soup(RM3.50) that came with red dates, dried octopus and oysters, chicken feet and pieces to make it a sweet tasting soup. 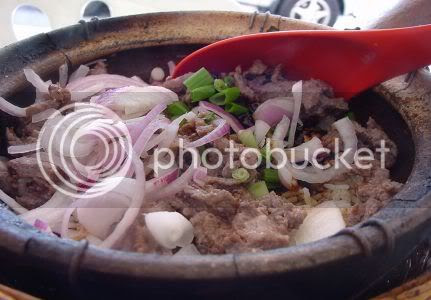 This place serves unusual claypot rice combinations. The traditional way is with chicken with additions like mushrooms, chinese sausages, eggs and salted fish but this place takes their combinations a bit further. Besides the usual chicken version(RM5.50), there are spicy thai(RM5.50) and black pepper(RM5.50) versions. Instead of chicken, you can also have prawns(RM12), beef(RM8) and fish slices(RM8) in their claypot rice.

To cook the claypot rice, the rice is pre-soaked and then cooked on a gas stove as and when an order is placed. Pre-soaking the rice helps it cook faster. The toppings are also pre-cooked and will be added on top of the rice when it's almost cooked. The best part of the claypot rice is the layer of crispy rice on the bottom that can be scraped and mixed with the fluffy rice on top adding a nice crunch to the whole ensemble when you mix the topping with the rice. The above claypot rice was the black pepper beef(RM8) that was mildly spicy and came with slices of beef and raw onions. The small version is big enough for a hearty meal for two people with the inclusion of the soup.

Opens for lunch and dinner. Closes on Thursdays.
(If coming from the LDP from Sunway, turn left into Kolej Damansara Utama. You will see a Petronas station, turn right and the shop is at the row of shophouses next to the station. It's directly opposite the Damansara Jaya Residents Association)

Tagged with: Malaysian Food + Claypot Rice
Posted by boo_licious at 6:18 AM

I thought the name is "Busy Bee Corner". Well, I never paid too much attention to its name anyway. Now I wonder is this the same restaurant I went to before. And when was the last time I went there..

Hi September. Don't think I have ever heard it referred to as Busy Bee Corner. Hope it's the same one - can't miss it as it's on the row of shophouses near Petronas station at Dsara Jaya.

The first thing i do when i have my claypot rice is to spoon out the crispy rice..But the oler generation believe that crispy rice lovers are stuborn!!Haha

Yeah, I love it too so I must be stubborn. I usually mix it around so I get the crunch and fluff together.